My local club was one of the lucky recipients of the “Your Club, Your Story” promotion, and while some of my clubmates have been making terrific and bad-ass progress, I’ve been going pretty slow.

(I go by the nom du guerre “General Sloth” for a reason!)

But progress has been made! I posted an unboxing vid, then did some serious mathhammer, er, mathguard, but then got stuck. The Trident Realm colors were very, very foreign from the humans or furry monsters I normally paint, and got super intimidated.

So I procrastinated with a new Centaur for Vanguard: 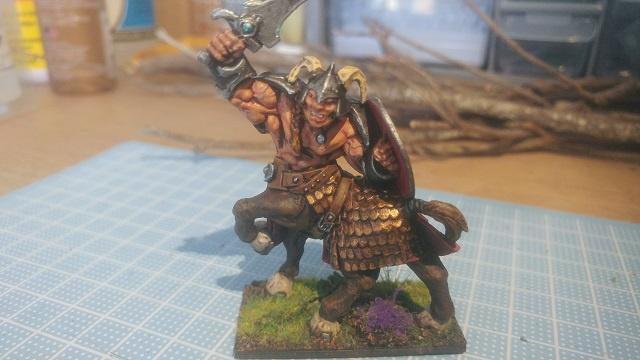 Finally, finally! In my latest update (“I Pity the Thuul”) got past my painter’s block with a series of skin and armor tests, took a big step back with a @%#-up of the Riverguard, and a small step forward with some Thuul skin tones I like:

More to come, but I’m off to run Vanguard demos at our FLGS!

After the total screw-up that was priming and basecoating my Riverguard, I procrastinated some more. (Not entirely - most of my hobby time was going towards running Vanguard demos, playtesting some stuff, and finishing up my 2000 pt Herd army.)

But I’m back on the Riverguard train, if only because I’m procrastinating about something I’m dreading even more. 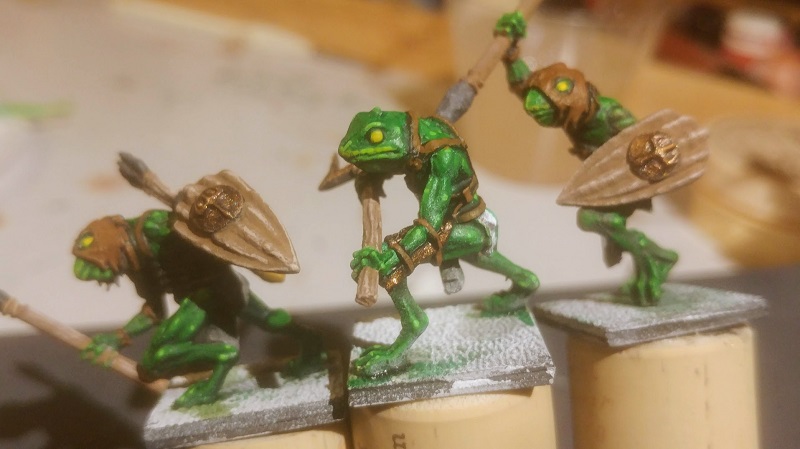 In other news, my clubmates are making (more) headway on their warbands. Matty’s Abyssals are on fire (almost literally) and Joel’s Nightstalkers are looking scary.

Update: A Finny Thing Happened on the Way to the Forum

So I’ve done a shite job of posting updates to the KOW Forum, or even keeping my blog up to date. In my defense, I’m a goddamn sloth.

However, I’ve finally finished up my Trident Realm warband! That’s actually a pretty big deal for me, even for something that was supposed to be just a table-top quality speedpaint project.

OK, not entirely finished. Gotta clean up the base edges, and I want to gloss or satin coat some of the minis to look more ‘wet’. And there’s always more layering and clean-up to do. But I’m going to call it here – realistically these aren’t going to hit the table much in the near future as our Vanguard campaign is ending soon, and I’m already feeling the draw to build a new warband. (Preferably tanky, as all I’ve really played are squishy finesse factions. Abyssal Dwarfs, maybe?)

Anywho, here’s how they ended up:

A sizeable chunk of these were painted by my buddy MattP (I traded him a bunch of neglected Cadians). We independently landed on very similar color schemes, so that worked out nicely!

FYI, I’m in the market for one more Heartpiercer so I can at least have an MMC troop on hand for regular Kings of War! Ping me if you have a spare.

Good work! The frogs are lovely models and l like your color scheme on them, look quite natural. No dambustler to go with them? Your water elemental is also a nice model …

Thanks! If I was to keep going with this faction I’d definitely consider adding a Dambuster and a Riverguard Sentinel, another Thuul, and dropping the Initiates for Otters. And maybe try to figure out how to put a Centurion and a Thuul on a mount, because there were some scenarios I wanted even more speed. In general, I wasn’t really happy with the performance of any of the Naiads except the Centurion (although that could just be my own ineptitude), so it’d be a significant overhaul.

I have also started to test the nerictican warband in my Vanguard games and In fact, I like the Naiads. So far I played just 3 games (2 wins, 1 loss) with:
3 Naiad Initiates, 3 Riverguards, Naiad Lurker, Aquamage, Dambuster and Water Elemental.
The initiates seem just a bit expensive (I think they could be for 9pts instead of 10pts) when compared with their warrior kins (for 12pts) in the FoN faction but their trident ability combined with a good speed (especially when one pays 1 power for Rising tides) are excellent for slowing down key opponent’s models or when one need to reach a distant objective in some scenarios. The lurker provides additional R-dice and its net combines well with the Riptide spell cast by the aquamage. The warband is lacking in terms of punch but is a fun to play.

My impression has been that the faction is pretty fast thanks to Tidal waves. It is interesting that you are still wishing for more speed. I guess it depends on how one plays the warband or what tools one likes to have in it.

They are super fast! My first games all went well because opponents were caught off-guard by the speed. But went downhill from there as they got a handle on it.

Mounts would be for campaign play only. There were a couple match-ups and scenarios where I would have liked the option. I also found Power very, very tight (your build generates ~5 on average) and the oppty cost for Rising Tides pretty steep.

I tried a similar build as yours but two Elementals instead of Dambuster, and Heartpiercers instead of Riverguard (because only #@^%$ two come in the support pack!). I think Riverguard are better, though.

Next time, I would consider Otters over Initiates. 2D8 @ 5 is almost useless, but 2D8 @ 4 with Vicious and Swarm is actually a threat. Same speed and points. You give up some durability, but who are we kidding? Both die to a stiff breeze.

Keep me posted on how it goes!