I went with lightning bolt in the end, once I had a think about what the Centaur Chief actually needs to be doing in a 6-7 turn game. The only individuals he would realistically be charging are boomstick wizards or maybe flying super solos to sit them down, and in both cases disordering is the real point, which should be fine with as is. I actually had Blade of Slashing on him until the 11th hour, when I swapped over to LB to give me another tiny tool for very early or very late game.

Watch me charge loads of individuals this weekend

Cheers for the well wishes, I’ll report back.

Thanks for sharing!
Interesting to see the list develop along with you getting the hang of the army.
Gives me a glimmer of hope for my dwarfs.

Quick post-tournament update! Had a great time, games were fun and seeing so many familiar faces (often with shiny new armies) was really excellent. I’ve got hundreds of photos to process and a lot of home and work stuff to catch up on, but I should get to the reports soon enough.

As a sneak peak, I faced (in order): Ogres, Dwarfs, Nature, Orcs and Abyssals. Not too bad for a field dominated by Undead, Ogres and Trident Realm!

Looking forward to reading about it!

That’s a good spread of opponents! Looking forward to seeing how it went.

Related, I feel bad for the dude playing all mounted goblins – 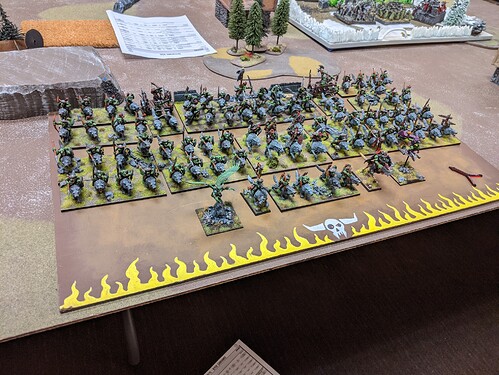 – that had to face three Undead armies in a row on Day 1, before finally fighting something alive (and that he could win against) on Day 2

Finally getting around to processing my tournament coverage. Game One is up: THE HALLOW GAME 9: OGRES – BLOODFIRE

That was a rough game and the dice didn’t help. Hunters are surprisingly tough, but that was ridiculous.
I do get the sense that you had already lost in your mind before the game though.
Not sure what I would have done, just not used to seeing g that in KoW.

If you were at Crossroads, I might actually play you eventually!
I’m in southern Ontario.

Are you part of the crew from Hamilton and we’ve in fact hung out before at Crossroads / Orctown??? I was going to King Beyond The Wall this month until the border situation didn’t really show signs of clearing up, so I refocused on autumnal things in the States that I could more assuredly do.

Re: Game One, I don’t think my assessment was wrong tho. Ogres out fight, out move and out shoot all but the most skew Herd lists. They’re top tier, Herd are pretty convincingly low tier (I don’t want to say bottom but they’d be down there if it weren’t for the speed skew lists like Conroy’s). I knew from experience that a draw wasn’t going to be possible either, and that was before dice happened.

I am in Hamilton, but I moved to Canada just after KbtW in 2019, so haven’t been to any big events… yet.

Can’t argue with your assessment, just disappointed that it’s made in a KoW game.
Hopefully herd gets the help it needs

The list for its strengths is light on the faster Herd elements. Even a bit of wild charge would make the speed 6 more useful. Herd could be able to out chaff Ogres. Still I can see why the Ogres are a tough match up for them.

I’m pretty sure this Ogre list - and most, as all meta ogres have great mobile shooting - would erase most chaff, but sure, having 3x harpies would be helpful. Won’t happen unless I can find some flying myconid tree things? I have a big one for a unicorn / beast but haven’t found little ones. As for WC, I found Sp 6 + WC(D3) (Spirit Walkers) wasn’t actually good, specifically into Ogres who have Sp 8+ things as well as Sp 6 + WC(D3) of their own. It’s great for out-threating Sp 6 things, but Ogres aren’t just Sp 6, or if they are then they don’t care (Siege Breakers).

I don’t disagree with any of this - his list is tough and the Conroy list is built around a few really fast units.

I don’t know if it would be possible to add a few more of those units without maxing on them, in order to apply more pressure, and counter shooting?

I’d say your opponent brought a more no holds barred list to the tournament.

Not sure who I was rooting for against dwarfs, so good result there!

For nature those treeherders are a lot of points for not a lot of US.
Do note that flying units also lose nimble when disordered, says so in the fly special rule.

Got another two games in last night - the tournament has really pumped up the club to get games in again, plus there’s a new group starting up maybe an hour south of us - so trying to push through these tournament reports!

Do note that flying units also lose nimble when disordered, says so in the fly special rule.

Ohhhhh very much my bad, it seems I’ve been using the 2E COK rule where disordering turned off Fly but only turned off Nimble if it wasn’t explicitly written on your unit entry

Many apologies to my Dwarf opponent (and I guess myself when I’ve allowed people to nimble around my own small blockers).

Let’s wrap this series up!

Game Five: THE HALLOW 13: FORCES OF THE ABYSS – BLOODFIRE

For the curious, the overall army breakdown was:

Well done on the scary orc horde, masterfully done.
Tough break on the abyssals though

On turn 7 and progressive scoring:
Those rules and double 1’s do seem to be a departure from a tournament game based only on skill.

Which I don’t think is a bad thing. KoW is already incredibly well balanced and predictable. Having a few rules to make it exciting and unpredictable to the end make it more fun.
We’re not playing chess for a reason, right?

Most games are not between players trying to test their skill and win a tournament. Even at a tournament games like that are probably in the minority.
I reckon that the vast majority of KoW is played by average players looking for a fun and hopefully memorable experience, where the outcome is mostly based on decisions made during a game, but that could go either way (hence KoW over other games).

Almost all of the games that I have won or lost in turn 7 (or due to double 1’s) have been close games that could have been decided by another roll just as easily.

In my experience with progressive scoring (from Malifaux, Infinity and a little from Visibly Riley battle reports) is that it doesn’t change the outcome very often.
Usually only in close games.
Progressive scoring does make the losing player’s experience worse though, by reaching a point where the game is hopeless and just being played out earlier.
Having even a slim chance to turn things around makes losing suck less.
It also advantages aggressive playstyles/armies and speed, which I don’t think KoW needs to be doing more of.

Re: progressive scoring, I don’t know that I can be convinced it’s not just better. I do feel your runaway argument about crushing spirits - which is ironic, as my argument for progressive is that it’s rewarding to people who play the scenario the whole game. Every other game I’ve played that has both progressive and end game scenarios (Kill Team for example), the progressive ones are so much better than end game only. I struggle to imagine KOW wouldn’t be the same, and I’d certainly like more scenarios to be more dynamic, if not all.

On Turn 7, I’m fine with it, but I really would prefer 5+ or even 6+. Make it a cool thing that could maybe happen and save your bacon, not an extremely common thing that flips games on their heads or creates a win-more. Both are NPE situations, in a game that doesn’t have many of them.

As for snake eyes, 100% cool, please keep. Devastated is fine too, if not really needed.

EDIT: If it’s never been stated and people haven’t got it yet, I’m not a competitive player in that I play KOW to win (that’s often too list-reliant for me to be interested), but I do really respect well-designed games and increasingly don’t waste time on games with too many Negative Play Experiences, which are almost always the result of poor design or poor balance.