Another prep game for this weekend’s tournament, report is go! 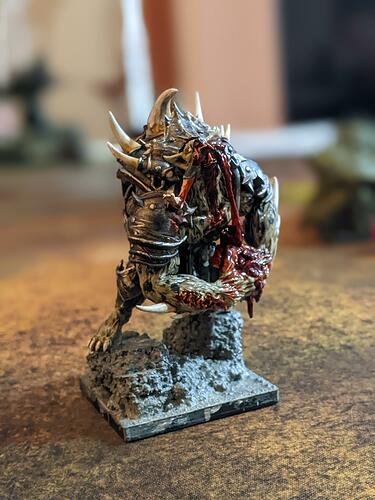 The tournament prep continued with a match versus Ogres, this time my club mate Drew’s really excellent Gnoll Ogres (Gnollgres). 3D prints from a variety of sources lovingly covered in hyena …

Oh boy! You have had some ferocious games recently! Keep 'em coming!

I’ve only piloted the Ogres once (making my second attempt at them soon), and have not played against them yet, but they seem like a strong army if one can get the positioning down for the heroes. The Warrior Chariots seemed like an odd choice to me at first, but I guess it does give them something with more of a charge range. Neat idea there!

I’ve worked through a number of your Herd reports, but admittedly not all. You had been running Forest Shamblers in some previous versions. Was those big scout moves too “all-in” for your liking? Or did you find that the Brutes and such worked better and/or suited your play style better?

How are you feeling about the basic Lycan Alpha? Like everyone, I like my Inspiring sources to be doing other stuff than standing around and looking impressive, but I wrote off a lot of the 5 attack monsters (Lycan Alpha, Snow Troll Prime, Thegn on Frostfang, etc) as being too weak for combat. But I keep seeing those kinds of units in so many lists and think I need to reevaluate my thinking.

Thanks for the reports!

Thanks for reading! I’ll probably finish the next one around lunch today

I’ve worked through a number of your Herd reports, but admittedly not all. You had been running Forest Shamblers in some previous versions. Was those big scout moves too “all-in” for your liking? Or did you find that the Brutes and such worked better and/or suited your play style better?

So yea, when I first made the Hallow it was as a ‘Verdant Herd’ army, all Tree Herders, Forest Shamblers and Tribal Spears with Centaur support and a token Beast of Nature. It was an easy match for the minis I was using, plus I had never played with Scout and in my estimation going heavy on it was the way to do it. Years later it has turned out that having a 24" bow or a Sp 7+ movement are both solid Scouting options (he said, looking at Kin of various flavors).

I played a couple events with them, did slightly worse than I usually do but had an ok time. The flying Beast was easily the best unit and the only real pressure piece, followed shortly by the always great Tree Herders, the surprisingly solid Centaur crew and the plucky Tribal Spears. Notice that I’ve left out Forest Shamblers - honestly, I think they’re bad as hordes. They don’t really survive, being the archetypal De 5+ Nv 17 that everyone builds against, and they certainly don’t fight. I played a couple games where I hard scouted and trapped the enemy in their deployment zone, which was a great feel as that’s how it’s supposed to work (see the game vs Orcs at Crossroads 2021), but I shelved the army concept.

Last year I played only Trident Realm … but in that time I had gone back to painting stuff green for the Hallow, because I like hobbying on it and knew I’d be back, like all Herd players. I realized last summer that if I’m going to enjoy actually playing the army, I need some hammers, because it feels really bad to struggle across the table with my De 4+ and no shooting, only to do nothing when I arrive in combat. If I’m getting shot to hell, I at least want to give those elves a black eye in the process.

Happily the Herd is full of hammers, and COK 2021 had brought Brutes back onto my radar. One of the attractions of Herd for me is global pathfinder - y’all might not remember, but Brutes shipped with WC (D3) but no pathfinder?! Meaning I’d never considered them. Once COK gave them pathfinder (and brutal), I had pretty much found my smashy core horde again. I’m only a few games in with them but absolutely loving the unit. It’s not perfect, Sp 6 is slow and De 4+ is a liability, but man do they hurt. I will say, if they didn’t have fury I probably wouldn’t play them. I don’t like units that need to be fixed with items - look at Tyrants, whose lack of pathfinder is constantly being fixed by items - and Nv support would be needed if they didn’t have that baked in too.

How are you feeling about the basic Lycan Alpha?

You know, she’s really doing work! I prefer to give her a casting item (Trickster Wand or Zephyr Crown) so she has something else to do, but I’m grabbing flanks and combo-charging all the time with her. I’m genuinely surprised that a naked Alpha can be so useful, but as you say, she’s one of a category of nimble, scoring, inspiring hero that is very very good in 3E.

I do find I’m always upgrading her to Moonfang early in a build, then downgrading to Alpha with item, then taking her item away

How are you feeling about the basic Lycan Alpha? Like everyone, I like my Inspiring sources to be doing other stuff than standing around and looking impressive, but I wrote off a lot of the 5 attack monsters (Lycan Alpha, Snow Troll Prime, Thegn on Frostfang, etc) as being too weak for combat. But I keep seeing those kinds of units in so many lists and think I need to reevaluate my thinking.

They’re for utility, rather than just combat.
Small, square bases and nimble means large infantry/cavalry heroes are very maneuverable while still blocking, scoring and doubling attacks on flanks like a unit.
They do more damage and are more durable than they might look at first glance. Usually Me 3+, CS 2 and De 5+, so damage output and durability are not far from a regiment of similar cost.

That makes them incredibly handy.
Maneuverable enough to get where you need them; cheap enough to chaff things up if need be or go get/carry an objective while still being just enough of a threat that they can’t be ignored.

I would make a distinction based on speed though.
The Sp 8 or more heros can also threaten flanks and force your opponent to respond, while the slower (Sp 6) large infantry heroes are “only” there to be handy as described above.

I think of the fast variety as half dragons; roughly half the damage output and cost and not quite as mobile (slower, not flying), but still very disruptive and the same US.
Like a budget version of budget dragons (flying large cav heroes, like beasts of nature)

Reading about this large infantry smash up was fun, thanks.

Really shows how this version of your list (i.e. brutes vs shamblers) is a different and much smashier play style.
Being able to stand up to ogres in a smash up is no mean feat!

Speaking of carnage! Here’s my last practice game before the GT. I’m genuinely surprised I’ve only played 20 games with my Herd army but I think that number is correct? Regardless, five more reports in bound in the next couple weeks, see y’all then! 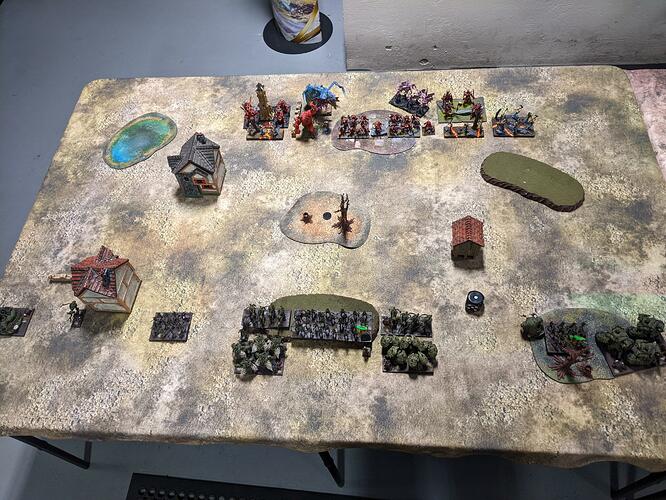 One last practice game for the Dead of Winter GT this weekend, and I’m up against Bill, our local Abyssals player. He threatened to bring his lightning hell, max Flamebearers list but decided…

Oh man, those were some replies today. Thank you both for your detailed thoughts!

I’m still entertaining some hobbying and casual Herd games later this year. I’m still intrigued by Scout and might try some Forest Shambler regiments sometime. Thanks for elaborating on these @Boss_Salvage! (I actually just read that Orc report last night, and wow! Those seemed fun there, and good luck on the rematch!)

I think @DarkBlack’s take that the 50mm monstrous heroes are “budget versions of budget dragons” is actually pretty apt. Coming from someone that runs KoM Generals on Winged Beasts, that is making good sense to me, and you both make a lot of great points in your replies. Earlier this month I noticed I don’t do Nimble charges or positioning all that well, so I think that’s the source of me undervaluing even these basic versions of monstrous heroes. Thanks for the insight!

And then wow, another very bloody game against the Abyssals! I feel your opponent’s pain in list building. I liked the concept of Abyssal Horsemen (Regen and CS on some cavalry sounds great!) but they just haven’t been working for me either. Good to see the Tortured Souls can do some work. Molochs are great, but they need a little screening and babysitting unfortunately. I had not seen this before, but using the Gargoyles as the punching bag for Zaz was a nice idea as well. Great stuff!