I am sorry for lacking time to write an extensive report but still would like to express my thanks for organisers of the KoW International campaign day that was held last weekend. Our group really enjoyed the event (as on several previous occasions) with 9 players participating. We played at a new gaming club/store established recently by a Czech company that produces gamemats (and other wargaming goods), so our thanks to them for hosting our local event.

The good side included armies of Basilea, Free dwarfs, Herd, Ogres and Order of Brothermark. The bad armies were represented by Empire of Dust, Nightstalkers, Orcs and Undead. As the good side had one player more, one of us always skipped a round. The results were as follows:

As you can see it was very closely fought contest with the good side just edging it in the second round at least in our location.

Some pictures (you can see more elsewhere) from the event: 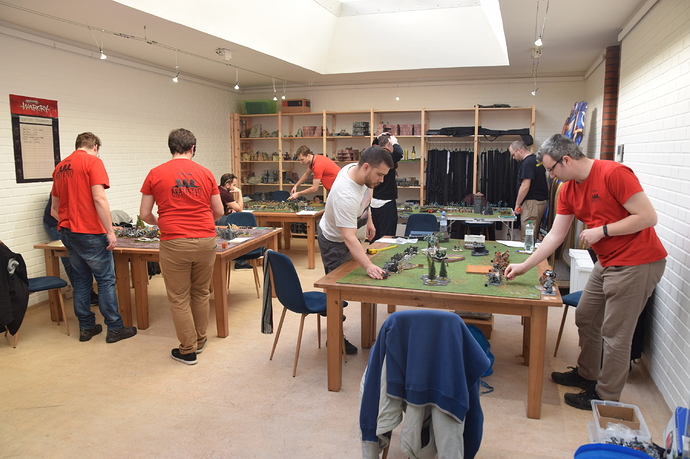 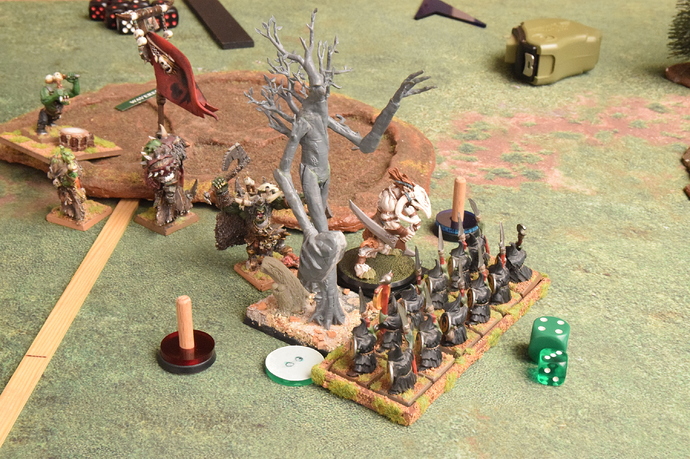 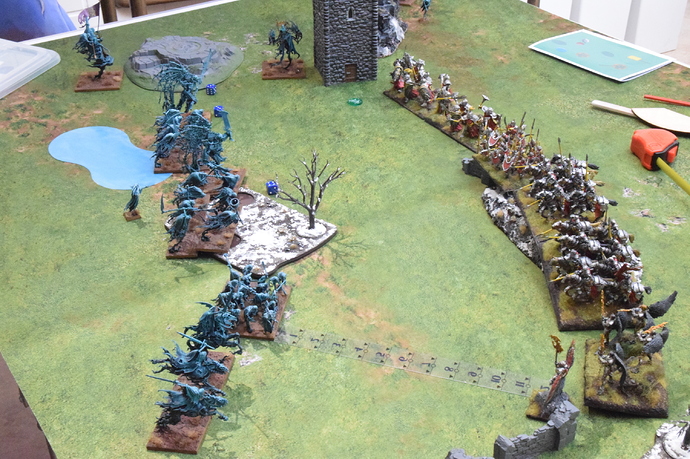 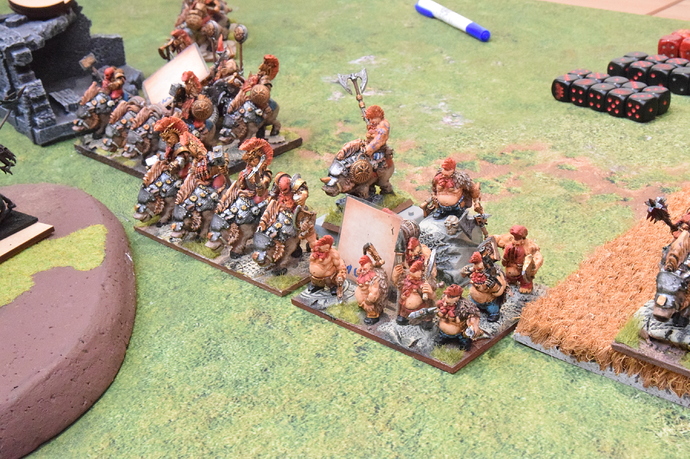 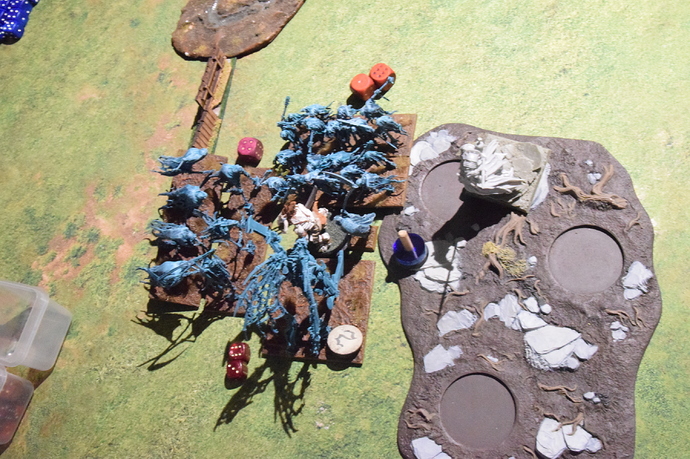 Sounds like a great day. Interesting photos - good to see what minis people are using.

Were you playing The Herd? What was your list?

Yes, I was playing the Herd army, thanks for your interest.

As you may know for the ICD every army included an additional special character up to 200 points created from any army available non-unique hero by improving one of its stats by 1 and providing it with an artefact forged from 3 magic items. I used lycan alpha raising its def to 6 and forging the artefact from Blade of slashing, Chalice of wrath and Aegis of the Elohi. This super-hero was then included in each army on top of the points allowance and not taking any hero slot.

For the 1k points I took:
2 hordes of lycans (one with Brew of strength)
1 troop harpies
1 Tree herder (Blade of slashing)
1 Druid (BC, Conjurer’s staff)

I had also a 2k army ready with me but have not used it as I skipped the 3rd game. It had 1 more lycan horde, Moonfang and one shamblers horde split into two regiments with some changes in the magic items to tune the points.

Cool, we took part as well. Agree it was a blast! Gothenburg, Sweden. 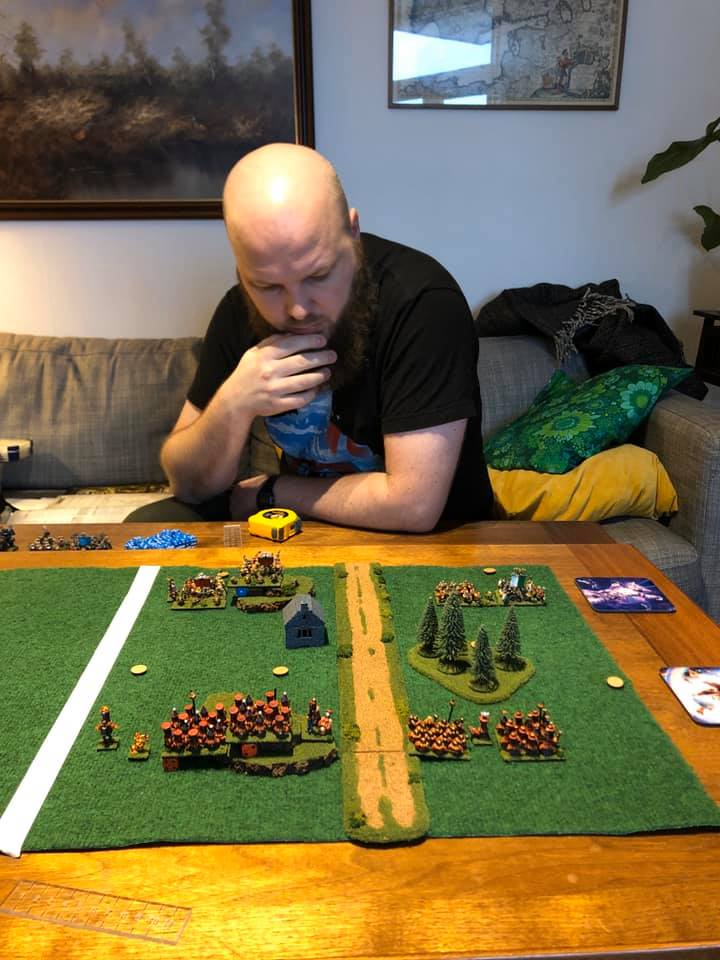 My undead Commander was a Ghoul Ghast with Wings, +1 CS and Dragonshard Shield. Stat boost was +1 De (back up to 4 after being reduced by Wings).

Yes, at least at our location. Though, as I wrote, the contest was very close. My herd managed to beat the orcs only thanks to 7th round (the game was a draw after round 6) and in another game the nightstalkers were beaten by Basileans only thanks to the evil player managing to roll snake eyes twice during a single round.

I would also like to thank the organizers for making the scenarios reasonably balanced. In the previous ICD edidions it was not always the case with some scenarios almost impossible to win for the side that got handicaped due to bonuses carried from the previous campaign games.

No Herd infantry in there, any particular reason?

How did you find the forest component of the army?

My herd army started as an almost pure lycans list that I liked thematically. I was slowly adding some other units during the 2ed but have only one regiment of spirit walkers to field. For the 3ed I am building a FoN army mixing “tree units” and centaurs. Thus, my use of a combination of lycan and verdant units at ICD was dictated by the units I have available. I may add some infantry to the herd list in a distant future but I am a very slow painter and currently have more trees, harpies and some centaurs on my work table.

My preferred style of the herd army is a fast hard hitting force which seems to be well complemented by the scouting trees. So far I have been reasonably happy with how the army works. However, it feels to me as a combination of the FoN and Herd, not really that much fluffy herd theme as I would like.

My Herd list started as a legacy beastman army and I’m in the process of adding a forest contingent too. Plus it gives me the option to use them in future elf/SK/FoN lists or as a stand alone allied block. If anything I’m phasing out Herd units!