What is the purpose of wargaming miniatures?

I said rideable creatures. Mounts are rideable by definition!

Oh, ok. I should have said rideable creatures then. I was curious what someone modeled as a non-rideable creature. I can’t think of any as long as you could scale them up or down appropriately. I guess potato riders, though funny, wouldn’t make sense but I would let it go if they looked the part.

I am lucky on that I have never encountered multibasing with huge chunks of portable masonry on them. They look good as display pieces, bit as gaming pieces, no.

Multibasing while not something I am a fan of, can work as long as any scenic elements are kept to within the same height or below of the models on the base. Anything taller can cause a lot of issues.

As for hills causing top heavy models to re-enact a falling tree, that has been an issue ever since miniatures encountered hills… the two are just natural enemies. I haven’t got any hills in my terrain collection.

Miniatures have a long track record of being sometimes posed in a way that makes them not game friendly (the 5th edition WFB Chaos Warriors come to mind).

I do play historical wargames that use wood blocks for regiments, and 2d terrain. It is fun, but sometimes I want to see 3d models and terrain, the spectacle of two painted armies on a great battlefield is something that not a lot of gaming hobbies can match.

First things first: As long as you’re civilised (which you are) you can post your opinion, whatever it may be. (disclaimer: barring some illegal activities that don’t have anything to do with wargaming). So in that perspective, I fully support your post.

That said, I bloody disagree with what you say.

For me, Kings of War is mostly about the visual spectacle and the immersion of stories told. This is aided best by beautiful and themed forces. (or at least, painted miniatures). I also love dioramas and scenic multibases, as there’s much more to be done with miniatures if you use height as a part of the diorama. A regiment base of 10x8 cm is only so big. 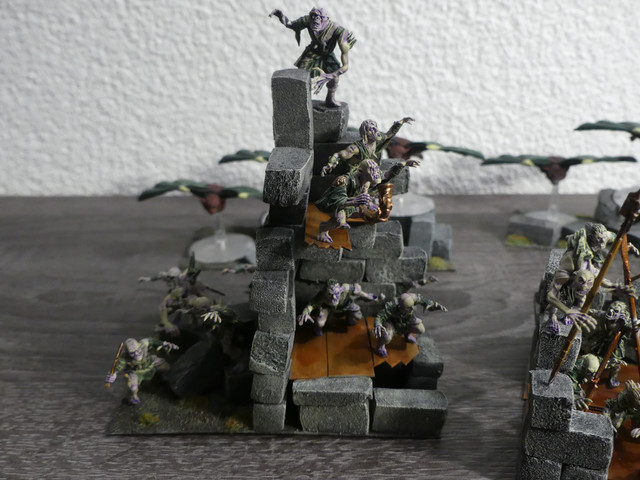 My ghoul regiment is one prime example in which I use the height to its fullest. In my undead armies, they are ghouls and they double as lower abyssals when I play abyssals. I don’t think anyhone sees these guys as anything but height 2 and all units (there’s 4 regiments) are the same. (here’s more) 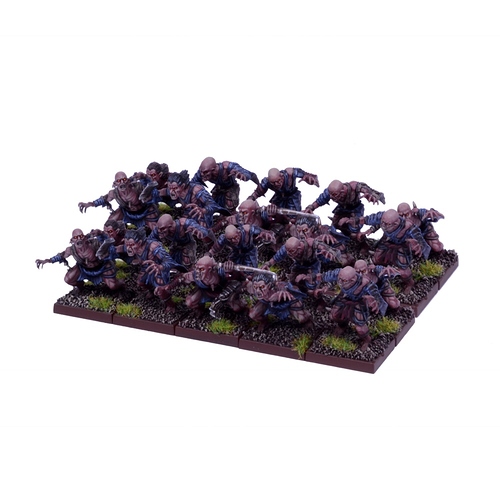 My abyssal army features a lot of ruined terrain as it occupies a ruined temple. Though very few of the used miniatures are official abyssals, I don’t think there’s a lot of confusion which unit is which.

I love the spectacle of a diorama style base - even though I tend to base in blocks myself.

I’m a bit in awe of many people’s modelling talent to be honest. Like you say - a regiment tray isn’t exactly a large starting surface.

The purpose of wargaming miniatures is a visual one by nature. They are supposed to make your game look like a ‘real’ battle between armies. If you play historical wargames, it’s all about accuracy. If you play a fantasy or sci-fi wargame, it’s not. It is up to you how your army looks. Playability must be give, no question, but the rest is your imagination and creativity.
It’s the same with terrain. If you prefer 2d-terrain (which I do not, except for gaming mats), you probably do that to minimize technical issues and improve playability, but you basically end up with a boardgame. Boardgames are fun, often good designed (gameplaywise) and sometimes feature miniatures, but they lack the ‘visual greatness’ of miniature wargames, which is an essential part of the hobby for me.

I dont know man, I personally think you took those Ghouls too far in height.

I get that you dont like the “flat, fully ranked” look tho. A couple of level changes is always nice on a multibase.

I have to agree. Those Ghouls are frankly too tall, would be easy to put a height 3/4 thing behind them and use the diorama to block an opponents awareness of the larger thing.

Feels a bit like modeling for advantage to me personally.

I entirely disagree. Everyone knows that infantry is height 2, that banners, unit fillers, scenery pieces etc. do not “exist” for purpose of heigh and that as god-like giants (compared to our delicate miniatures anyways

) we can ALWAYS see whatever is on the board, and we also know the height of the unit/model behind the infantry unit in question

I agree with Luna. While I might not personally go with such a large structure on a mere grunt unit, I don’t think that wall is giving any unfair advantage.
It is perpendicular to the front facing so most of the time you will be getting less than it’s full potential of 80 mm blockage assuming you go down to its level. But more importantly my eyes are located at about height (edit) 32 for determining my own LoS on a meter high table ;). If I sat (for some reason I can’t stand sitting down for more than a short break when playing a wargame and I just realized that now lol) then I still would be height 13 from my thorax to my eyes, measured in terrain height

@the OP:
Interesting thoughts, I remember these kind of discussions around warmahordes quite bit, which was definitely more focused on the game than the miniatures than what I’ve seen here so far.

How I personally have viewed the matter of models in wargaming is part of a larger spectrum. I own a decent computer and have slowly collected all of the total war warhammer 1/2 expansions that have gone on full sale on steam (so I am 3 packs behind the new releases iirc).
If I want more realism with little guys running around and being sent flying by explosions and cavalry charges, I play twwh2 which for less than the cost of an average wargaming army gives you access to the full rooster (or a few units less if you are cheap like me) of 14 distinctly different armies each with 2+ (median 4 or 5) subfactions. I can load and reload in a minute to try something new, make scenarios myself or let the game throw me into scenarios so I have to think on my feet. I can play alone or with a friend.

With this in mind, why would I play a tabletop game at all?

Going to the other end of the spectrum, the blocks. I actually have a small set of cardstock cutouts to test things. I have full access to all kings of war factions and rules, and even better my cutouts are scaled down so 1 inch is 1 cm. Everything being a factor 2.5 small is a godsend for quick setup and clean up.

So why would I commit to a single army for 150++€ when I can play the game to its fullest without models for the price of the rulebook?

For me the reason I commited to a proper scale army is because I wanted everything else that came with it. I wanted my own dudes, I like being able to hold them and push then around on the table. I like painting them and I absolutely adore basing. With this in mind, I multibase with scenery. I line them up in cool looking formations that make me happy to look at. And I make pretty terrain pieces separate of my army so they have cool 3d things to stand on or around for a pleasing (to me) visual spectacle.

All this effort I put into them also gives me an attachment to them I don’t have on the two extremes of my personal spectrum of rank and file games. I spend more time planning out an army so it occupies more mind space.

And in the end, I know the person across the table also made this kind of decision, although perhaps for completely different reasons. So I respect the work they put into their army, whether it be multi based or movement trays of individuals.

So tldr I guess to sum it up, I’d just be playing total war warhamma on the computer if we didn’t have 3D models and terrain that I liked

(…), would be easy to put a height 3/4 thing behind them and use the diorama to block an opponents awareness of the larger thing.

Feels a bit like modeling for advantage to me personally.

As someone who has played with this particular multibase many times: it’s indeed possible to “hide” an individual or small monster behind the multibase, but no more than it’s possible to hide one behind a forest, hill, or whatever. It’s (in my region, at least) a common courtesy to let your opponent know at all times where your models are and point it out in case it might get lost. Never had a problem with this, personally.

Furthermore, the number of units on the battlefield seldomly exceeds two dozen, so “forgetting” one is actually quite hard.

While it is true that elements of a force can hide behind hills, forests, and other large pieces of terrain. Those terrain pieces don’t move, whereas that Ghoul unit does.

Informing an opponent during your turn is great, still doesn’t make the situation fool proof. Some players are often engrossed in their own plan and may miss when you inform them that there is a thing behind the Ghoul unit that while it has a model smaller than the Ghouls is in fact many times taller as far as the rules are concerned. Also some players (myself included), are going off what we can see. So very easy to miss that mounted Vampire Lord about to come crashing in undamaged, where he could have been turned into a red smear by my artillery a few turns earlier.

I understand you wanted to break away from the standard rank and file, however I think that Ghoul unit is far too high, at a glance I’d say that is easily 6" in height.