I plan to take this to 2,000pts. Besides upping the Skeletons to Hordes, I am torn between adding another Troop of Wraiths, or a Regiment of Revenants. 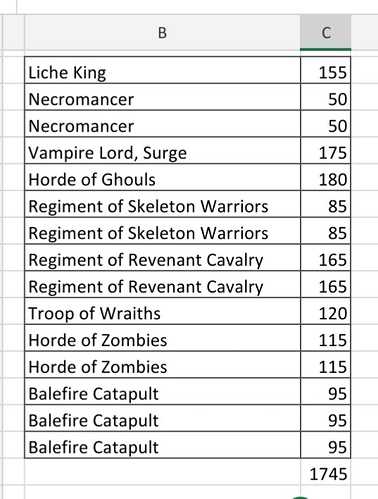 First things first: The best advice is to actually test it and try out what works for yourself. What works for me may or might not work for you. That said, I might be able to give a few pointers:

You probably want a few more heavy hitters. The revenant cav are okay in that department, but no match for the likes of soul reavers, Z-trolls and/or wights. I would try to fit in at least one or two of these guys.

I’d take ONE horde of skeletons and ONE horde (maybe a legion) of zombies as anvils. If you take more anvils, they will block your own heavy hitters. The ghouls, however run great as troops and/or regiments instead of a horde as they do not shamble. They can act as chaff, unit strength and/or aim for flanks.

As for the characters, I don’t think the vampire needs surge. (he’s best in combat anyhow). He’d also greatly benefit from a cheap magical item such as the sword of striking. Two sources of surge are probably enough as you don’t have that many heavy hitters which need surge help to get into a flank.

Likewise, a duo of necro plus lich king is probably enough in the surge department. Kit out the necro with bane chant and the inspiring talisman and give the lich king either drain life, lightning or blizard so your spellcasters always have something to do AND inspire.

Three balefires give a decent artillery barrage. Use them well, as their inclusion (as an alternative to a horde of soul reavers for instance) force you into an agressive playstyle. (open up a hole into a line with the artillery and force your undead through).

A few thoughts as someone who plays against Undead a fair bit. I’m going to assume you have the models for these so want to use them

Thanks for the advice! I had planned on using the Ghouls as a threat on the flank of the battle field, their speed would mean that the enemy had to direct some units to deal with them, this opening their lines. Especially as I was thinking of using a Regiment of mounted Revenants to help give them some punch.

The centre of you will was going to use the Zombie Hordes as anvils and the Skeleton warriors as flanking forces.

Morgoth does look very tasty, I personally don’t include named characters in games under 3,000pts.

Good points on the amount of Surge, would giving the Vampire Lord Drain life be better?

I am very tempted by some Zombie Trolls, would also give me ample opportunity to give the Necromancers the aura upgrade.

Edit.
I always add Magic items on after I have got all the units I want and then it is mainly to fill up the remaining points. This is mainly due to not being able to remember them all! I do intend on buying the cards to help with army creation, and as a great aid in the game.

Good points on the amount of Surge, would giving the Vampire Lord Drain life be better?

just run him nekkid. Maybe a steed or cheap magical item like the mace of crushing. He’s supposed to be in combat all day, so there’s no need for spells IMHO.

Zombie trolls are really fun. I’ve got too many. These days they need the aura’ed necromancer to be as effective (point for point) as a troop of soul reaver infantry. The foot vampires are really good these days. I even built a couple of them.

The Vampires are pretty much the best infantry hammer out there and really good value at 250 points. Use um before they nerf um!

I’m trying to keep this army pure Mantic miniatures, and I really don’t like the Mantic vampire infantry. As it is I am using Lady Iona as a generic Vampire Lord as she is a decent sculpt.

As soon as Mantic make decent vampire infantry, I’ll be all over them!

I’m trying to keep this army pure Mantic miniatures, and I really don’t like the Mantic vampire infantry. (…)
As soon as Mantic make decent vampire infantry, I’ll be all over them!

YES! I, too, hate the Soul reaver infantry with a passionate hatred. It’s not that it’s bad models, I just DO NOT like the aestetic of these things.

I stole @FredOslow’s idea of converting paladin foot guard to soul reaver infantry. This works quite well. The pictures have been posted quite a few times, but if you didn’t see them yet, here they are again:

Where are the heads from?

I believe they are from Mantic ghouls.

That is a great idea! Are the Paladin heads separate, or do they need to be clipped and filed to accommodate the Ghoul heads?

No clipping required as far as I can recall.

That is me sold, and with that the list has now jumped to 3,000pts (obviously once magic items have been handed around). 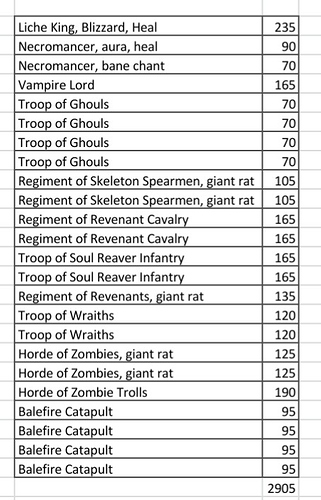 I believe they are from Mantic ghouls.

That is a great idea! Are the Paladin heads separate, or do they need to be clipped and filed to accommodate the Ghoul heads?

(thanks!) The heads are separate, so there’s no need for filing.

I just needed a bit of green stuff as the ghoul heads don’t have that round protusion that paladin heads do have. Just a little globe of green stuff will do.

There does seem to be a distinct lack of vampire like third party bits. I love the conversion so much that I will do the same.

Still trying to decide if I should go for these or not https://puppetswar.eu/catalogsearch/result/?q=vampire
they look tasty.