I’m quite new to KoW, about 7 games under my belt, mostly against elves (haven’t won a single game, elite and high Nerve are brutal!). Tomorrow I’m playing against Kingdoms of Men for the first time. What do you good people think about this list:

I’ve been reading about battle groups and am thinking of the following:

Not really sure what I’m doing other than trying to have coherent core groupings with some staying power and flanking possibilities.

Any help and tips would be appreciated. I really would like to be able to at least draw for once, losing all the time is a little demoralizing.

Goblins are a great army, with plenty of choice to always keep you interested, and your opponent nervous. If i had one critique with your own list, it’d be a shortage of core units., and insufficient support for those units. I tend to build armies on the old Warhammer Fantasy template, so 50- 60% core units, 20-30% Elite/artillerry and the 10-15% on HQ. (or Toys for the boys).
So, to use this example , you have a regiment of Sharpsticks and 2hordesof rabble. (345 points) If we include the 2 units of trolls and artifacts, it brings it up to 740. Now, before we go any further, let’s suggest a must do change. You need to have mawpups on those goblin units! That is a must do, IMHO. Even hordes of Goblins couldn’t hit the side of a barn when nailed to it, so an additional D6 attacks, hitting on 4s with crushing strength 1 is not to be sniffed at. The Mawpups ill probable do more damage than the goblins themselves. Whether you spend the 10points each per unit to bring your total to 770 or change an artillery piece to a Mawpup Launcher, is up to you. With only 3 units , it might be cheaper to just add 10 points. Each unit will probable not get a chance to reload with more mawpups .
Another critical addition would becheap wiz with Bane chant, (andInspiring Talisman, sitting between 2 hordes,where he cant be hit, and buffing one before they go into combat.
That brings you to 855 points . If you have points over, consider mounting the Wiz.

Now, let us pause for a moment and consider the Formations/Battle Groups. Look again at the 2 hordes of Goblin Rabble and the supporting Wiz. He gives them a punch of Crushing Strength, and leadership when they need to test morale, and they in turn protect him from getting hit, cause he is roadkill otherwise. That is how battle groups work, Making the individual parts of the Formation greater than their individual parts.
Let’s add the fleabag riders troop now, (with Mawpups) . Personally, i would, and do, take at least Regiments or hordes of these, because they rock! Fast, nimble Thunderous charge, viscious hitting on 4 and defence 4… what is not to like about them? But, you have a troop, so we’ll stick with that for now. As a troop, They might be good to hang back and protect your artillery from Flanking Cavalry or flying pests. If so, consider changing to Fleabag Rider Sniffs for long range shooting options. So we will add your artillery, and Winggit at this point, with all the bells and whistles, bringing your total to 1340 points.
I would consider adding a regiment of Luggit Gangs or even the full Formation from the latest upgrade. They certainly pack a punch. But for now, we’ll stick to your list.
I love Magwa and Jo’os, (and Kuzlo & Madfall too) They are both nasty and add coolness. Kuzlo &Madfall are a wild card though, so run outsideof formation. Magwa and Jo’os however, are not, and could slip comfortably into a battle group with your trolls, giving them leadership and gaining some additional muscle and protection. They areall speed 6, so will do well to either hold your centre, or as aflanking wing of your army. The Trolls wont need a staying stonewith him around to boost their morale, although as hordes they should be ableto cope without a boost anyway.
That leaves you with a Giant , 2 mincers and a Flaggit.
You could put the Flaggit near the Sharpsticks to give mutual support, but i think you’d be better with a Troll Bruiser for your troll units, and put Magwa and Jo’os protecting your artillery and for speedy support . Given your units, i’d make the mincers into a Mincer Mob troop, giving you D6+14 rather than 2* D6+6 and better nerve for 40 less points. Stick Magwa with them on one flank, maybe with the Giant too, and watch your opponent sweat as they grind up the field .
That would take you to 1875 points. Personally, i would pick a Goblin Slasher over a Giant, even though the giants look great. It is cheaper, gives you additional ranged attacks with Steady Aim too, and has better Me+.
Total 1875 points so far, which will give you a bit extra points to play with to add Fleabag Riders, Lugits or some Spitters to sit back and hold your objectives, while discouraging attacks on your artillery.
I’ve had limited success with Artillery, especially Goblin artillery, and fielding 3 units of artillery wil paint a big target on them, so they will need protecting. Also, i doubt you will have enough shooting options to use them effectively. (again, i’d consider a Goblin Slasher instead. Although this option might make your Eye in the Sky Winggit obsolete as it doesn’t have the Lobber keyword )

What i would add for consideration is consider how effectiveyou are using terrain? My horde of Fleabag riders always have a terrain boost such as Maccwar’s potion of the Caterpiller (Pathfinder 20 points and no additional cost for larger unit, or Jesse’s Boots of Striding 15 points). One of those rabble hordes would benefit from Hammer of Measured Force (20) for damage on 4+ regardless of modifiers, or Blessing of the Gods
Check out youtube for effective terrain tips.

Here are a few links to give you an idea of tactics, battlegroups etc. How to win at Kings of War - Battlegroups & Deployment - YouTube for Battle group tactics
Kings of war Goblins army review and tactics (part 1) - YouTube for Goblin army build and tactics

Kings of War Tactics and Strategy Report - YouTube for tactics

and for good Batle reports, Guerrilla Miniature Games are always a good place to start, with easy to listen to, light hearted, fun commentary and insightful tips 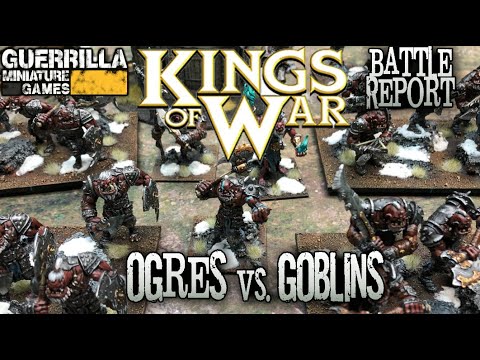 oh one more thing… if you are searching for good tactics/battle reports etc. remember to put 3rd edition or 2021 2022 in your search or you will get bogged down in games with different rules applying.

Thank you so much for all your help. I’m working on a couple of lists following your advice which I’ll share with you as soon as they’re finished.

In the meantime, I ended up going for a different army list: sharpsticks and rabble regiments, one troll horde (only had enough models for one) no giant, a mawbeast pack, king on chariot, luggits, and more. I did take one piece of advice though - mawpups on (almost) everything. They really made a difference. I’m considering including a mawpup launcher next time.

I really liked having regiments instead of hordes, since I could use them as chaff. The small sharpstick regiments really caused my opponent to thing twice. With hordes it always felt like they were getting in their own way.

The winggit I took with Ramming speed, and I managed to block up a whole flank for a couple of turns.

Fleabag rider Troops: I used these as chaff, and they really did their job of getting in the way of things. I’m definitely going for a regiment next time though, since I really need to get to the firepower in the back.

The troll horde didn’t really hold up against a legion of spearmen, so I need to make sure to give it an extra bit of support next time. I’d never used troll before, but I think that with a bit of support they can do well.

Mincer - I used this along with a unit of spearmen and it cleaned up a unit of knights. I’m impressed to say the least.

No problem @goblin , I’m always glad to help a fellow Goblin player out on… " 'is mishun to dafeet dem smelly elvses and hoomans"