Just got my 3rd ed. Uncharted Empires book in the mail and I gotta say I’m pretty disappointed reading the LoR list. The halflings units got butchered. No halflings scouts or spearlings or mounted scouts(replaced by human version so not so bad) no halflings wizard (which was in ALL my lists) and my Iron Beast got turned into a mammoth?

The conversion of the other units to KoM units(spear militia to phalanx, city militia to polearms …) make sense as that’s what they always were for the most part.

I had seen some other threads about changes people were unhappy with but most were stat changes not removal of multiple units.

I have not looked that much but is there a thread where they explain the changes they made ? Not that the game designers are required to explain changes they make to their game I am just curious.

Welcome to the forum!

Unfortunately, the LoR is not the only army that got some key units removed from the list.

Although, I have not seen the original post (most likely it was on facebook), it is understood that Mantic decided which units will be included in the army lists and then the Rules committee worked on their profiles. The unit selection made by Mantic was apparently based on what units/models they produce or intend to produce.

Apparently according to the fluff the halflings are withdrawing from supporting the league too much and forming their own armies. There will be a halfling only list eventually. With generals riding big beasties and such. I was gutted too when I saw the LoR list but am prepared to wait as long as its not too long!

(…) No halflings scouts or spearlings or mounted scouts(replaced by human version so not so bad) no halflings wizard (which was in ALL my lists) and my Iron Beast got turned into a mammoth?

I understand your pain and feel it in part too.

That said, I have no problems proxying light cavalry (humans) with other light cavalry (halflings) or vice versa as it’s pretty clear from the model which it’s supposed to represent. The same for the halfling sorcerer, I mean, a wizard is a wizard, whatever its race. So, no problems there!

I AM bummed over the loss of the iron beast, however. As many players do, I still own several GW steam tanks which are not adequately represented by the mammoth profile, especially now it’s lost its balista. Also, I much preferred the old halfling iron beast over the the mammoth, as I loved the defense 6+ monster a lot. Now we have to ally in dwarves to get it.

Another unit loss I don’t like is the loss of the polearm troop. Of all chaff, I used this troop all the time, even multibased my hordes to be split up into troops, the way I used them most of the time. Over my two armies, I own 10 troops of halberdiers, which now have to be used as regiments (a sub-par choice over other options) or hordes instead.

On the other hand, the new army list gives us plenty of new/improved choices. The spearmen (but especially the pikemen) are really good choices now and the battle shrine is pretty decent too. All-in, the League of Rhordia list is IMHO slightly better than it was in 2nd edition.

The Iron Beast wil be back for the Halfling list. And while I’m happy we’ll get a full halfling list, this change has also destroyed my LoR army.

I am happy to hear of a halflings only list. But man my defense 6 iron beast with breath attack (not in 3rd Ed anymore I believe) and my stealthy individual wizard will be missed.

Also kinda irritated that I just bought uncharted empires book to find not only my list messed up but also now I am gonna need to buy another book in the future to field a halflings army which hopefully will have all my goodies back in it.

Also I love the pictures of the Aralez from the books please make these models Mantic . I have had a hard time finding decently priced quality minis for them that are correct size.

ictures of the Aralez from the books please make these models Mantic . I have had a hard time finding decently priced quality minis for th

I use the reaper bones griffon. 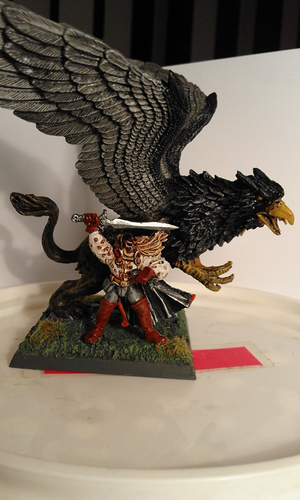 Haven’t seen a cheaper one at € 7. You’ll just need a rider. I used an infantry model for this one (currently painting another one) bu tmost 28mm cavalry models fit just fine.

This was from the Mantic Blog when talking about Uncharted Empires and goes into what happened with the halfling element in LoR. The background then expands on this

Q: Have some units been dropped from the previous edition?

A: Just like with the lists in the main rulebook, we’ve taken the opportunity to look at how we wanted each army to behave, as well as how the game played overall. Some of this involved consolidating similar units into one, some units were removed, but others have also been added. Not all units removed will have gone forever – they may come back in a future Clash of Kings book, on their own, or as part of a formation, for example. Some units were moved out of what is now a Master list and into a Theme – and so some units currently not available may do likewise in some of the Themes we introduce in the future.

Q: Where have all the halflings gone!?

A: There are still some halflings in the League of Rhordia list! However, the halflings are pulling back from the League of Rhordia, and while they continue to fulfil their basic and mandatory military obligations, there is a growing migration back to the shires. Have no fear though, the armies of the shires are swelling as a consequence so you can probably read between the lines (and refer to a previous answer above!) if you are a fan of the little people.