A Plea to Change Charge Pivots

As you may be aware, there’s some confusion floating around about how exactly to resolve charge paths. Now, I’ll preface by saying this is some nerd shit, and if you and your opponent are happy to just go with what makes sense in the moment then all power to you. My group and I thrive on clear, precise rules, so we all understand actions and consequences at a glance.

My plea is to eliminate the requirement that a charge take the shortest path, and instead take the one that requires the smallest pivot.

I realize that it can make for some goofy looking charges where your unit runs all the way to the opposite corner of the unit and stumbles across every pond and forest on the way, but it is VERY easy to see what the correct path is. The exact shortest path is sometimes quite difficult to nail down, and a few degrees of uncertainty can easily be the difference between a hindered or clear charge. Take this example: 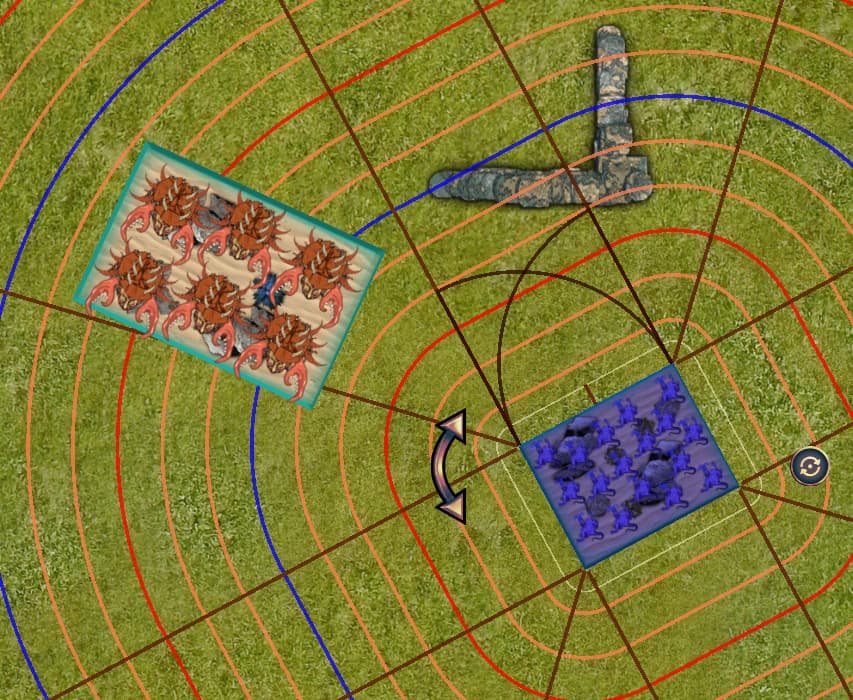 image853×700 127 KB
The highlighted unit wants to charge the Gigas in the flank. They must pivot in order to do so, but how far do they pivot? Well, in this case, the shortest possible path after a pivot is something like this 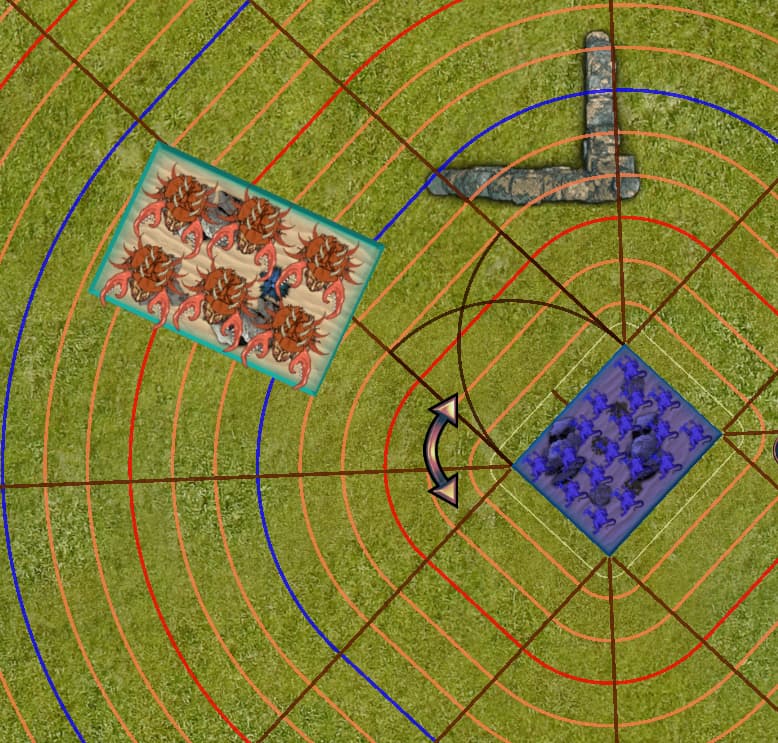 image778×743 125 KB
but even in UB I can’t really tell whether the charge should be hindered or not! Now, obviously I’ve constructed this example to be as ambiguous as possible, but it’s not like this is an insane theoretical. When you pivot about your center, you change the position of the corner you’re measuring from, so when it gets down to the margins, it’s really difficult to get an exact path.

There’s no question that this next one being a hindered charge is a little goofy, and in this case the shortest path would make way more sense within the fiction of the battle, but I am begging you to agree with me that that narrative benefit isn’t worth the headache of figuring out the shortest path on the table. 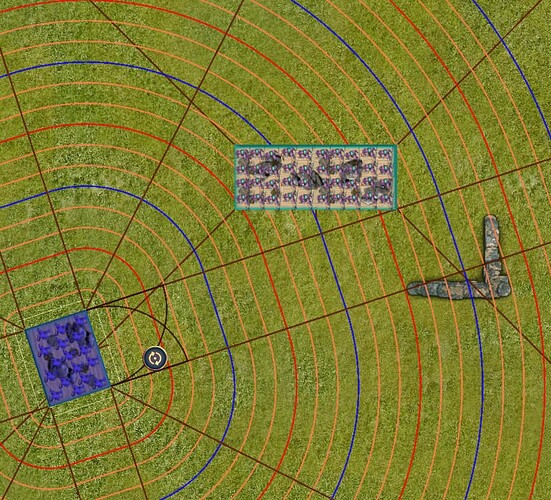 In your first image, I think you pivoted too far? If you really want to play it “minimum pivot” I believe it would be so it barely hits the correct facing on the target (even just the corner). Have you mixed in some “closest distance” measuring as well, because that would make it very confusing for me again.

I dont mind if it becomes like that. It would be more clear cut than now.
Although my preferred method would be to pivot to line a units leader point up the closest point on the enemy unit before moving, that would require a complete errata of the charge rules, while the minimum pivot would just need an update in the FAQ.

I have COVID, and nothing better to do than paint and participate in rules discussions

This earns you are a proponent of “Rachidou’s law”? 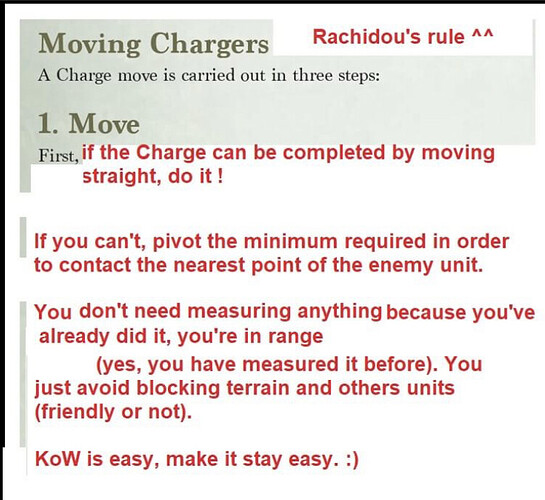 On the first example in the OP, in our group we would simply roll a d6 to decide if the charge was hindered or not.

I agree that the shortest path is sometimes ambiguous and difficult to decide but still would prefer it to the rule of smallest pivot that goes against a natural logic that the unit takes the shortest path to reach the enemy when charging.

I do not want to spend time on devising examples that would show the minimal pivot rule could be as ambiguous as the shortest path rule but I am sure such examples can be found. Just an obvious question that comes to my mind is how would one treat the charges with two pivots. When going around blocking terrain or units it seems to me much easier to determine the shortest path than measure angles of two pivots and sum them up.

This rule is unfortunately vague, but I’m not sure how to improve it. More rules just seems to make more edge cases.
It is remarkable how we have figured if out in our games for years and suddenly there’s an issue that needs clarification FROM ONLY THE RC.

There was a clarification long ago (somewhere during 2nd edition). It was basically that if a charge might be hindered then the charge is hindered.
Puts it right back to the exact route and distance not really mattering.

From a practical standpoint, I don’t think that determining the shortest distance is good idea.

The very first image is before moving at all, and the second image is approximately the pivot required to take the shortest path. It is the pivot required by the current rules, and a representation of the kind of thing I want to avoid. Minimum pivot would indeed barely touch the unit’s corner, which is a tiny bit goofy, but so is being hindered from a mm of rough terrain. It’s an abstract sort of game!

Rolling off to determine whether it’s hindered is a fine solution for some groups, but really doesn’t fly locally. We’re almost always looking for a very friendly competitive game, and hindered charges can make a huge difference.

@MechaSturgeon that seems quite sensible, measuring the closest point before any pivots seems like it should leave no ambiguity.

@DarkBlack the local TO has always ruled minimum pivot specifically because it plays the cleanest, I actually thought this was the official ruling until quite recently!

I’ve never thought of bringing “the nearest point” into it. That seems a neat solution - I can’t currently see how that would introduce new ambiguities into it. There are, however, beardier and more lawyery minds than mine out there!

The “nearest point of the enemy unit” really looks like a nice idea. However, relatively often the nearest point cannot be reached by the charging unit. Would the rule become the nearest point that can be reached? I guess so. Actually, it looks that this could also be applied easily enough to charges with two pivots (for nimble chargers).

The ‘Straight if you can; Pivot if can’t; Pivot can’t avoid terrain’ is a nice mechanic!

The wording from the FAQ: “Moves forward using the shortest, most direct route” still seems to me that moving ‘forward’ should be done where possible - so given option of pivoting is only done when physically have to get round things you can’t move through.

When in doubt, block iffy charge through terrain with a hero, just as you do to stop an unfavorable shuffle to centre!

I think this is what they are going to do at the US masters, so we will see how that goes.

It’s also supposedly been a thing on UB for a long time.