I think a separate ranged attack value (R Att?) would tidy things up, and widen the possibilities when designing ranged units.

While it makes the stat line more complicated, I think this would be more than compensated for by bringing the ranged attack values all into one place on the profile. It would also allow for the creation of some interesting units with differing melee and ranged attacks.

Great idea, when Kings of War first started having a units melee and ranged attacks tied up by the same attack stat made sense. As the game has evolved and expanded it is now a limitation that holds the game back. The two need to be divorced.

Keep a units melee score in the stat line, but have their ranged weapon the unit has state the number of attacks. For example,

Obviously this would need 3 figures if the unit has Troop, Regiment, and Horde options. So using the example above,

Or give the attack stat 2 numbers, where the firs is used for melee and the second for ranged attacks. For example,

The counterargument, is why add detaill and complication unless it is needed in a specific instance?

The current rule - that it is just the same value unless otherwise specified, seems to be work fine. Why add extra vebosity across dozens of profiles where that detail adds nothing?

Because it’d allow for Ranged stats to come down from the general level of 5+ that far too many shooting troops have gotten stuck with. 5+ so very very easily modifies into 6+ and then that unit just does nothing - fewer attacks but Ra 4+ would help at least a little.

I’d rather just see shooting brought back up normally, but I kinda like this idea.

I don’t see why you can’t just reduce the attacks and up the range accuracy like you suggest without adding a new stat. Archers that suck in melee would still suck (suck worse). Archers that are good in melee can be adjusted by tweaking the existing melee stats. And you don’t need a major revision of the entire rooster.

Am I missing some benefit?

My reasons for suggesting it:

The counterargument, is why add detaill and complication unless it is needed in a specific instance?

The current rule - that it is just the same value unless otherwise specified, seems to be work fine. Why add extra vebosity across dozens of profiles where that detail adds nothing?

My thinking is that if there are enough exceptions, it becomes more complicated rather than simpler.

I think my preference would be to have the number of ranged attacks with the other information that scales with the unit size (regular attacks, nerve etc) - for me, this seems like the most elegant solution.

However, if a lot of ranged abilities were going to be optional upgrades, units that may or may not have ranged attacks, then it maybe be better to attach it to the ‘weapon’ as in your examples.

Either way, my preference would be to choose a format and then apply it across the board.

I think this demonstrates the issue. 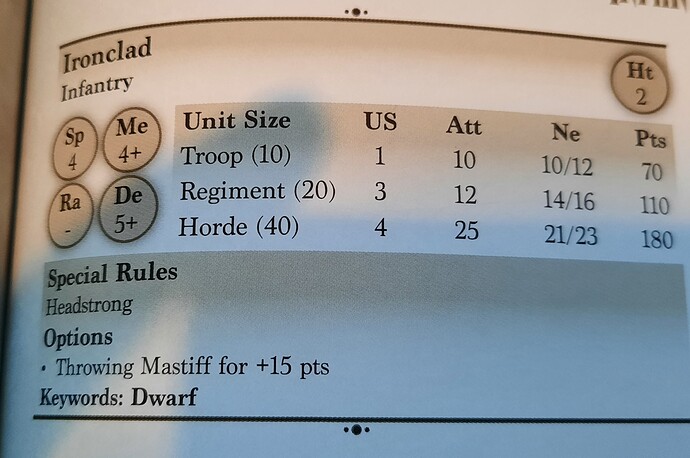 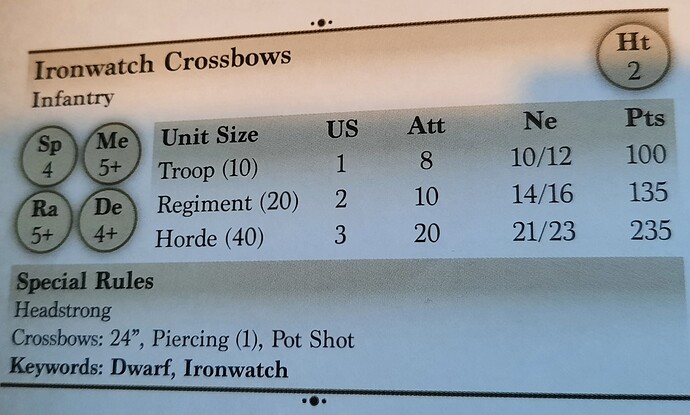 The Ironwatch should have no less attacks in melee than a unit of Ironclad.

Taken as a Horde the Ironwatch for an extra 55pts over a horde of Ironclad, they get less Unit strength, less attacks, worse Melee stat, worse Defence stat. While piercing (1) at 24" is nice hitting on 5+, statically that is 4 hits from 20 attacks. Where as the Ironclad are getting 12.5 hits from their 25 attacks.

This is before terrain, Ensnare, Stealthy, etc are factored in. The Ironwatch may be able to attack from range, but they can be shut down very easy. A fast unit (mounted Hero) can engage within 2 turns, and only needs to do a single point of damage (which with their Def of 4 is not out of the realms of possibility) and the Ironwatch are disrupted and can not shoot in their next turn.

Now if the Ironwatch unit retained the same number of attacks as Ironclad, but had the current number of attacks on just their crossbows it wouldn’t feel as bad an investment. As they currently stand, it feels like a player is paying a substantial amount of points to make their unit worse.

Thanks @Stonehorse , my feelings exactly. It is not that ranged attacks are weak (what do you expect in a melee-based meta) but that ranged units are so much worse in combat than they should be and as such have no role in the game. A unit of archers or crossbow should at least be able to strike in melee with the same strength and number of attacks as a
base level melee unit and without a points penalty.
For example, from the KoM list:
Archer troop, 75 pts

Agreed if there were a lot of exceptions that might make sense, but I’m not sure the complication is worth it given the examples you list.

I also don’t see why a dedicated shooting unit should have as many melee attacks as a dedicated melee unit, it doesn’t seem a given to me. The melee unit would likely have some extra command to give it more attacks or static factors if it was warhammer for example, which is abstracted into the profile.

And 5+ with 20 attacks is 6.66 hits, not 4? And those hits have a better wounding chance than the ironclad hits and at range. So against armour 4, they do 4.4 wounds at 24", while the ironclads do 6.3 in melee, with the difference reducing as the defence increases (both do just over 2 wounds against defence 6). Not so great a difference. The Ironwatch will also still do 3.33 wounds in melee.

I’m not saying the ironwatch are the best option, I agree they are overcosted somewhat and a slight reduction in points seems the best solution to me. But my mate uses two hordes of them (one of x-bow, one of rifles) pretty well. Combined with a few war machines and warsmith it can make a mess of high defence opponents, and if you commit enough to kill it you risk being overwhelmed by four more hordes of melee troops. And looking at damage output is only one factor to consider with these too. It’s also a big bunch of unit strength that needs quite a lot of resources to actually kill.

Both units used in the example have the same number of models, and aren’t elite options within the faction they belong to. They are both bog standard units for their faction and both have hand weapons as their melee weapon. Hence why they should have the same number of attacks, the Ironclad should (and do) have a better melee score, this reflects that they are a melee unit, where as the Ironwatch with their bad melee score reflects that they are not a melee unit.

I did my maths wrong, I was doing 1 in 5 hits, 20 divided by 5 is 4. Even running with your more favourable 6.66 is nothing to write home about, piercing (1) does help those attacks change into damage a lot easier. However such a unit hasn’t got many turns shooting, due to again how easy it is to shut them down. A cheap mounted hero is a threat the unit can not contend with. They drop to hitting on 6’s (again before terrain) due to the individual rule. The hero due to being an individual has a 360 charge arc and a threat range of 16"., this allows said hero to get into their flank where they can not attack from.The Ironwatch can not afford to pivot and shoot as that will reduce their already limited damage potential. A single point of damage from the hero in melee and the unit is shut down.

I did factor in Unit Strength, hence why I pointed out that the Ironwatch lose a point of Unit Strength compared to the Ironclad. Also, Ironwatch units are not going to be doing much movement towards objectives, so their Unit Strength isn’t that useful. They are a static ranged attack unit that is a bad choice.

A horde of Ironclad with diadem of dragonkind is a far better ranged attack unit. It can move and fire with no negative impact, has better melee, ranged, defence and unit strength stats. Oh, and the unit is still cheaper by 25pts, even with the magical artifact. It has less range, lacks piercing (1), and less ranged attack dice. However due to have a Ra 4+ and steady aim, it has a lot more flexibility with its ranged attack. Pivot move 4" and fire.

I’m not advocating turning Kings of War into a ranged game, but things like this shouldn’t crop up.

An example in the other direction, a unit of Halfling engineers with experimental, multi-barrelled rifles could have a high number of ranged attacks and a low number of melee attacks (again scaling with unit size).

I like the theorycrafting but I find it amusing you’re thinking of making shooting units better by improving their melee capabilities.

Hi @MarkG, my apologies for not specifically addressing your post. While my preferences may be in a different direction I certainly agree that having a separate stat entry for the number of ranged attacks is the better solution. In my opinion it is clear, universal and unit specific (as is the current method of using the melee attacks) but also gives a further degree of freedom in unit design without making the game more complicated.