So Ive been running the Abyssal Dwarf war band for about 10 games and Ive so far found it to be a rather unbalanced warband internally. That or Im doing something very wrong…

We are not the most competitive people, but I can’t fine any reason to take the Mobile Katyusha or Blunderbusses. Ive tried to use either in most games, but the are always taken out of action before the are able to fire. Or once the fire the damage is rather mediocre.

For almost the same price as a Decimator two Blacksouls is always more useful, or in the case of the Katyusha an Obsidian Golem is so much bettre/reliable for the same points.

The problem I have with them are the Reload rules and the short range. When Im able to fire they end up geting charged or shot by enemy shooters. Sure a few times Ive managed to get them in position late a turn and then been able to activate them early next turn. But its no stretch claiming that Ive got 5 shots of in 10 games…

So please share your thoughts or experience on how to use them! At the moment I can’t justify to bring them onto the table anymore…

You could try screening them? Enemy models can’t come within 1" of your models unless they’re the one being charged, or would be within 1" of you when they engage the guy they are charging. So if you have a 2" gap between screeners (actually up to just short of 2" plus the enemy’s base width), and you’re 2" behind your screeners (so the enemy’s final place isn’t within 1" of the screeners), the enemy won’t be able to run through. 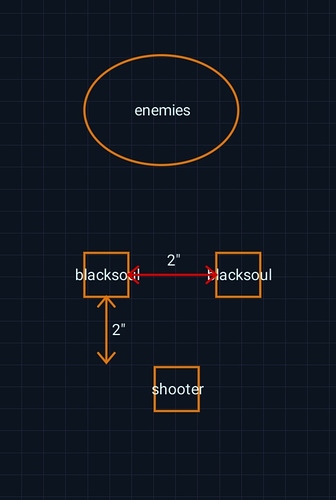 Jupp, Ive tried similar tactics but not to any success…

But Ive fount that their SP4 combined with ReLoad(ie move or fire) and a range of 9" means that they are so easy for enemies to avoid. Either the enemy simple moves away or take them out with either a Xbow with range 12", a move and fire weapon or in CC.

Sure they might get a shot of here and there, but for the points of the Katyusha I could take a Golem. Which takes lot more punishment, straight forward to use and reliable in CC.

My thoughts are that either A) they are way to overcosted, or B) they need to upgrade their shooting output alot for being worth to include. I think both are really important for the aesthetics of the Abyssal dwarfs, but whenever they are included it always feels a bit sadomasochistic.

Reload is very bad in Vanguard. If the model could at least carry an “already loaded” token around for its first shot, then discard the token and AFTER that suffer from Reload, it would be much better.

Agree, hopefully the Decimators will loose that when they get new models/update. Since they are able to move and fire in KoW. If that would be the case Id have no problem taking them.
The Mobile Katyusha would need something as well for 34pts its almost comical relief.

But not meaning to turn this into a rant, I was seriously asking for advice here. Since I feel a bit clueless and thought there might be something we had missed locally.

Actually, the abyssal dwarfs are the next Vanguard faction to get a complete release, so you can expect modifications of the existing and some new model profiles pretty soon.

AFAIK the Reload rule will be addressed in the next FAQ.

AlQuds is correct - you’re not alone in struggling with Reload generally, and Abyssal Dwarfs specifically. That feedback has made its way to the RC and I wouldn’t be surprised if there were some helpful tweaks in the next FAQ and Abyssal Dwarf releases.

Until then, consider a few tactics:

Create Kill Zones
Shooting is good at putting pressure on enemies. If the enemy sets up camp around a mid-table objective like Portal, you shoot the hell out of them until they die or deal with you. Alternatively, if you are defending in a scenario, you can set up just outside of places they need to go, so they have to enter your shooting zone and give you one free round to soften them up. This works especially well as a…

Second Wave
As salem notes, if you screen them you can put pressure on the enemy, forcing them to charge, move away, or let you shoot - with less risk for your shooter. (For more on charge blocking, see this post.) And if they do attack and kill a screen then you…

Counterattack
The Decimator does little until the mid-game when a big scrum forms. One of my models gets killed, leaving a bunch of victorious enemies all clumped together. Unload, hopefully hitting 3+ dudes in one blast, which makes up for not shooting the 2 previous turns.

Game the Initiative
A key part of getting around Reload is gaming the initiative so that at the end of the Round you have your shooter(s) in a good position for the next Round. If you made smart use of Group Activations and +1 Model Activations you’ll finish first and so go first the next turn. Shoot, and maybe use Fatigue to fall back.

Field More Blacksouls
But these are all gambits. As it stands right now, I think you’re right - more Blacksouls are the better investment.

Ok, thanks for your answer here. Lets hope for some kind of redo of the Abyssal Dwarf war band then. I really like the options in the list and consider the decimator a iconic unit that should be worth it. So hopefully reload get updated as said above, a short action token for Reload sounds good.
Or as far as I can tell in KoW Decimators are able to move and fire at will so maybe they’ll loose Reload. Will have to wait and see… Just eager to start a new campaign.