AWAITING ARMADA - DIARY OF A DESCENT INTO MADNESS (UPDATED 14 DECEMBER)

Dear Diary, Excitement is raging! Nearly time for the release of Mantic’s Armada. I ordered my stuff months ago and I’ve been poring over press releases and videos of the game. I’ve decided to go with a fleet of the proud and noble Orcs. Can’t wait. Al least I know that having ordered so far in advance, I will be one of the first to receive their glorious package!

Release date! I know that it will probably be a couple of days before my package arrives but I still peer out of the window every time I see a delivery being made, just in case. I am helped in my vigil by our dog who can sense my excitement and barks to alert me of strangers. Fingers crossed for an early delivery.

I enjoyed the Mantic Open Day, which has further ratcheted up the excitement.

Still keeping alert on the lookout. In the meantime, I completely re-made all of the terrain that I made last month. It doesn’t actually look any better now but it at least gives me something to do while I wait.

We are starting to see pictures on the web of people receiving their goodies. It can’t be long now!

We are now seeing some pictures of the lovely fleets painted by Mantic staff. Gorgeous. But why aren’t they hard at work posting my package? It still says Ready for Dispatch.

I saw a complaint on the web from someone whose Orc mast was slightly curved. Seriously? What about those of us for whom any Orc mast, curved or not, would be gratefully received.

Someone posted that they have received their goodies and will start work on them NEXT WEEK. If you don’t want them now, give them to me!!!

Some shops are now stocking Armada on their shelves. I proposed to my wife a cross-country road trip to go and buy the same items that I have already ordered and paid for. That didn’t go well.

I do not believe it! Someone has received their goodies and, instead of ripping the package open and starting work on their ships like any normal Mantiac, they intend to wrap them up and wait until Christmas. I mean, all the Goblins at Mantic have slaved away to get the product out of the day and someone is simply going to bury them for 3 weeks. Why have they been prioritised for delivery before me!!!

I saw on the web that someone in Arizona has received their goodies. I don’t understand it. I got my atlas out and Arizona is at least six inches from Nottingham while where I live is only about a quarter of an inch or less. Maybe it’s something to so with worm holes in the space-time continuum. I’d do the maths to check, but this page is not big enough. 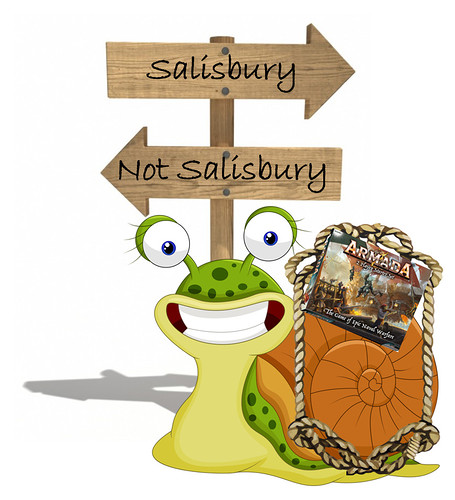 It arrived!!! The delivery caught me completely by surprise as the store is still showing it as Order Ready for Dispatch. I also didn’t get a warning from the dog. That’s probably not surprising as I spray painted him last night in preparation for trying out my latest fleet colour scheme. He doesn’t seem too happy about it and has stayed in his basket all day. I expect he will cheer up when I get to the top coat.

Anyway, I got the parcel indoors and ripped off the packaging. I was amazed, I can tell you. The parcel contained dress-making material for my wife. I threw it in the bin in disgust; she wasn’t best pleased when she came home.

I woke up this morning after a restless night. My wife told me that I had been moving around all night.

I came downstairs to make a cup of tea and found that, in my sleep, I had spray-painted the kitchen with the words: “Order Ready for Dispatch”. I suggested that we head out for breakfast (and lunch and dinner …)

Overnight I had a revelation! I can’t think why I have been waiting for an Orc fleet when the way ahead is clearly Empire of Dust. I think that there is cheap listing on eBay this weekend. Fingers crossed that my goodies arrive today so that I can list the Orc ships tomorrow to raise funds for those War Galleys.

Unfortunately, the ships did not arrive over the weekend and so I could not list my Orc fleet on eBay. This breathing space however, gave me time to do some more thinking and I reversed my plan to sell the Orcs to fund an Empire of Dust fleet. I can’t imagine what I was thinking! Strong and noble Orcs must surely be the way ahead.

Over the weekend I saw a post from Ronnie confirming that all outstanding Armada orders would be dispatched in the next few days. Lo and behold, I received an email today confirming that my order has been dispatched. Surely only a few more days now?

It is getting close to the time to publish the Moonrakers review of the year. I’ve decided to include a self-portrait in the review and so spent the morning with pencil and eraser. I’m not sure about it, but I think that it captures accurately my pent-up frustration. 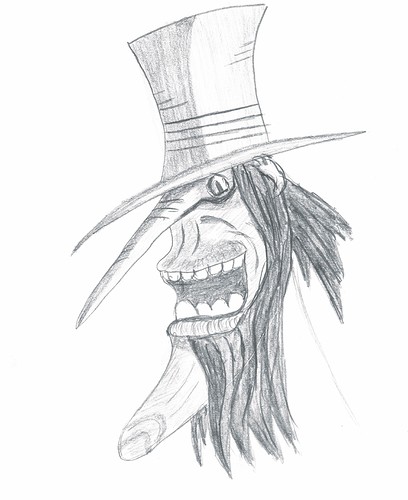 I consulted a Zen master on how to keep calm while waiting. He suggested visualising a happy place. Unfortunately, the happy place I ended up visualising was my painting table with a fleet of primed Orc ships ready to go. Zen really sucks.

More people posting on the web that they have received their ships! I spent the afternoon making wax effigies of everyone who has posted a picture of their goodies arriving – and then stuck pins in the effigies.

I also spent a few minutes working out an Orc tactica for Armada. Now, which way round does the pointy bit of the boat go?

I was reading the small print on the back of my jar of modelling sand and I noticed a bit which states the average minimum number of grains of sand per square inch. On first glance, this seemed unfeasibly high and so I ran an experiment. I painted a square inch of sand and then counted the number of grains. After a few false starts, an hour and a half later I had been proved right. The average was less than suggested. Just to be sure, I ran the experiment again. Four more times. And it turns out that I was wrong. Three of the four tests showed higher than suggested numbers of grains while the fourth was only marginally less. Across the five tests, the average was slightly higher than that minimum average suggested on the jar. So, there you are.

As I was heading off to buy the morning paper, a DPD delivery van arrived with a parcel. My spirits soared, only to be cruelly dashed when it transpired that the parcel did not contain my ships. Life can be very unkind.

Today, I checked the paints that I had bought for my fleet’s colour scheme. I was worried that they might be approaching their shelf life expiry date, but they seem to be OK.

During today’s church service, I belted out a rousing chorus of: “For those in peril in the postal system.” It got a few odd looks.

Having decided to run with an Orc fleet, I need to work out what to do with the Basilean ships from the starter set when it arrives. And then it struck me, there is only one possible solution: hybrid killer-whale/shipwrecks! A fleet of shipwrecks that have been hybridised with killer-whales by a mad (notice a theme here?) necromancer. I sketched out a few concepts and showed my wife. She said she thought the idea was half baked. I explained it patiently in more detail, and she then agreed that the idea is, indeed, completely baked. I also sketched out some ideas for a ‘ghost’ fleet with shredded sails and strangely glowing green hulls. This will be my fall-back if I cannot find suitably scaled killer-whale miniatures to kit bash with my ships.

Still no news of my ships though. Sigh.

And then … my ships arrived and it is all sweetness and light again.

at least you can laugh about it?!

Fingers crossed for your speedy delivery!

I’d feel your pain if mine hadn’t already arrived Jon😀. If it’s any help I’ve been to busy with work this week to do much more than open the box and glance through it.

I’ll give you a virtual game this weekend by video call if you want. You can tell me the moves you want to make and I’ll only cheat enough to make it a narrow victory?

Huzzah!! I’ve just received word that my parcels have arrived. Honestly, I don’t know what all the fuss was about.

Enjoy your building and painting!

Please do record the progress in the same way, if it’s not too much trouble. It’s an enjoyable read!

Glad you enjoyed it.