As we all know, some units rarely see the light of day, while others bask in perpetual sun light. This got me thinking as to why this is. Why do we see a tendency to favour high Defence units, and units with Crushing Strength and/Thunderous Charge?

I think I have found the main culprit.

Before this spell created overpowered ranged units as it gave piercing (+1). That didn’t seem like a lot at the time, but when it came to game play, it was quickly apparent that it was breaking the game. So, it was changed on order to help balance the game. I’d argue that it needs more changes.

Most if not all casters have it as (2/3), which makes it near enough guaranteed. All is needed is one die to roll a 4+ for it to work.

It skews units damage ability far beyond their points cost, and at the same time makes force selection slide over to higher Defence units. Going from Crushing Strength 1 to 2 is a big leap in damage output.

For example a unit with Crushing strength (1) goes to Crushing strength (2) . If it is attacking a unit with Def 5+ it has now gone from 4+ to 3+. That is from 1/2 to 2/3. Against Def 4+ goes from a 3+ to a 2+. Players are more than likely fully aware of the prevalence of Bane Chant and how it turns Def 5 to below average, so favour Def 6 to help mitigate the impact that Bane Chant has on the game. Where as units with no natural Crushing Strength can be over looked, it is a better points investment to help increase the damage output of a unit that already has odds in its favour.

In doing this we make it a no-brainer, horde up the unit with Crushing Strength, point and click it towards the enemy, once in contact cast Bane Chant on it.

If instead of increasing Crushing strength by 1, if it gave a unit Crushing strength (1), it would help lift up a lot of units that are not taken, while also not over powering those who already have Crushing strength. A small change, but one which I think would open force selection a lot more, and create more fun games.

I honestly think it would help open up the game more, as units with low or average Defence melee units wouldn’t feel like they are a liability, and it would help Bane Chant achieve its goal as a balancing spell. That Kingdom of Men Shield Wall Regiment may not be much, but with Bane Chant they can do something beside just standing on objectives and being a speed bump.

It might also help shift the meta away from Def 5/6 units, which I’d argue are taken more as a reaction to what Bane Chant does to units.

Anyway, these are my thoughts on the matter. What do you think?

What if Bane Chant would give a unit Vicious instead of CS+1?
That way everyone could still profit from this spell. But one would need to do the math if that is viable xD

That might also work. Re-rolling 1’s to damage would sure help a lot of units, while also keeping those with Crushing Strength powerful.

I think you’re analysis is backwards to be honest.

One minor point first, bane chant 2 only works 75% of the time that’s still pretty unreliable no where near something to be relied upon. Elf mages or Bane Chant 3 you start getting into reliable territory IMO.

I was thinking what if a successful casting of Bane Chant gave you as a player several options?

was even considering adding Elite to the list… but maybe best to keep it to the “to damage” part of melee for consistency.

This would surely make it worth more on weaker units, and give a lesser return of investment on stronger units, all the while never being useless?

One minor point first, bane chant 2 only works 75% of the time that’s still pretty unreliable no where near something to be relied upon. Elf mages or Bane Chant 3 you start getting into reliable territory IMO.

75% is very reliable, not sure why you think it isn’t. 2 dice of which only one needs to be a 4+ is unlikely to fail.

Bane Chant existing shifts the environment in favour of high nerve, ensnare and phalanx etc. protections that are unaffected by bane chant, not high defence units.

Not sure how Phalanx protects against Bane Chant, Crushing Strength is unaffected by Phalanx, are you mot mistaking it with Thunderous Charge?

We already see high defence units preferred du to being hard to hurt. Note I didn’t say remove Bane Chant, just make it Crushing Strength (1). All factions already have a wide selection of units that can deal with high defence units, through a combination of Crushing Strength and Thunderous Charge, or War Engines with a high Piercing. As ot is Bane Chant makes good units even better. 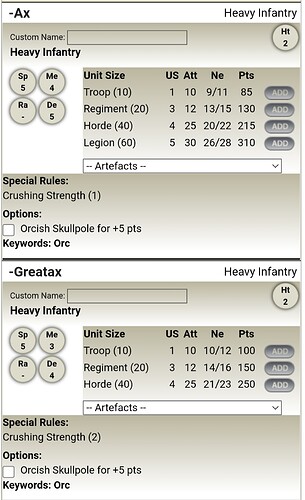 As it is Bane Chant on the Ax makes them have the same Crushing Strength as the Greatax, while also having a better Defence. The Ax have a worse point in Melee, so may not hit as well, but they hit just as hard and can shrug off more damage. Also the Moreax is going to be less able to weather the damage from ranged attacks on its way into melee. Whereas the Ax can weather the ranged attacks better, and then when in melee benefit from Bane Chant. If I were an Orc player I’d personally see little value in taking Greatax’s. I can get Ax’s to do the same role.

Change Bane Chant and now the units each bring something different to the table.

I think Vicious might be a better way to go about it, would remove the other options and just go for Vicious as it has more utility.

Question is, would that be for Melee only, or also on ranges attacks? Could be the boost Ranged attacks need.

Phalanx gives minus 1 to hit vs certain units.

Yes, but the vast majority of Crushing Strength is on none flying infantry, which are not effected by Phalanx.

i like @FredOslow s suggestion of a non stacking bonus. I know my Goblin units would be lost without a bit of magical help against most units, even at horde level. 30/35 attacks can be useless when needing 5’s or 6s to hit and the same to damage

I think that every unit should simply be paying as much for Def6+ as Lady Ilona does.

Making it Bane Chant (1) rather than (+1) could be good, but I’m not too sure how well this impacts the armies already struggling with hitting power. Looking at my Sylvan Kin there. Replacing the Crush with Vicious hurts them even more, given that they already have access to Boskwraith/Wiltfather for Elite Vicious piles of attack that still need BC to really work well.

In the Ax/Greatax example, you can get the Greatax up to Crush 3, which is pretty great, and 23/25 with a War Drum…

I agree that BC is a powerful spell. I also agree with @paulb800 that weakening BC would improve the already powerful Def 5+ units, so we would see more of them, not less as the original post suggest. Any tweaking of BC should be sufficiently tested and maybe accompanied by increasing the cost of the Def 5+ units too.

I like @FredOslow suggestion on capping BC for the units with CS or TC. On the other hand, many monsters with Def 5+ have CS(3+) and do not profit from BC normally. Thus, getting Vicious would make it profitable to cast BC even on them, making them even more powerful.

Issue though is that the de6 meta is already prevalent with some armies/builds, and while enough cs0/cs1 attacks will eventually do enough damage it just hinders those armies without plentiful cs as standard.

The combo of BC giving piercing 1 (armies that needed it generally had plentiful cheap casters, or decent ones with elite) plus the shooting artifacts was an issue - lots of units with high cs/bc is less of one

Very interesting topic, thanks for that! I play against my friends dwarfs regulary. My Undead lack CS, because I haven’t painted any of the heavy hitters yet. Bane Chant is vital for my army. I get it, that high def unit meta can be a problem. Maybe a slight increase in cost would be sufficent. On the other hand I’m no game designer and are more likely to break everthing, than to fix anything😉
Luckily, there is a rules commitee.

Statistically, for some armies/units, it might be better value to invest in a Brew of Strength at 30/40 points rather than for example a GoblinWiz (45 points+20 points for the spell, at a 2 in 3 chance of success per turn) or better still a Hammer of Measured Force for 20points where the unit damages on 4+regardless of modifiers.
An obvious fix for Bane Chant would be for it not to be stackable, so Units that already have Crushing Strength don’t gain from its additional boost, but weaker units get a little helping hand.

If BC gave units Vicious, then already Vicious units should get the re-roll on a 1 & 2 (if they need it).

In the Ax/Greatax example, you can get the Greatax up to Crush 3, which is pretty great, and 23/25 with a War Drum…

Orcs have access to some big hitting units, due to a combination of Thunderous Charge and Crushing Strength. Those are the things that should be deployed to counter defence 6 units.

An obvious fix for Bane Chant would be for it not to be stackable, so Units that already have Crushing Strength don’t gain from its additional boost, but weaker units get a little helping hand.

That was my initial idea that prompted me to create this thread. I still think it would help raise weaker units that are currently over looked.

@MYamatoSH idea of granting Vicious is still with merit.

If BC did the same it still benefits the weaker units but potentially avoids the worst excesses. As commented above, CS3 or better (esp combined with lots of attacks) is horrid

It’s the whole bell curve thing that makes it an issue.

Anything that results in a 1 in 6 chance of success becomes problematic in the long run.

Because of Defense 6 being too widely available (IMO of course) banechant is almost necessary.

But mainly i think this is a points being played issue - at 2000 there’s not a lot of opportunity to skew with power Defense 6 units without having to give up in other areas - at 2300 there’s often enough points to allow 2 extra horde units of D6 being possible without any real drawback on the army capabilities.

If anything, I think 2300pts is a crutch, not bane chant.

Would you say that Kings of War doesn’t scale well in that case?

What about smaller points, say 1,500. Would that be a good place where the points create a balanced game?