University of Valentica – Research Log. The books found in the ruins by Professor Jones and his team seem to be the journal of the early days of the infamous Black Rodger, which if true could be one of the greatest discoveries of the decade as up until now it had been assumed that this individual was more myth and folk lore than real person and ay best a composite of many different individuals from the period now know as the Age of Conflict. So many of the records of that time were lost in the many destructive wars that raged for over many centuries. What little we know is based on old stories, legends and what scraps of information the Dwarfs and Elves choose to share with us, so a genuine diary from the period could be invaluable in so many ways. The language is very archaic and our translation software is struggling with many of the words and the poor condition of the paper. However, we have transcribed some of the earlier pages which seem to be a record of a mercenary company Black Roger was a part of and their employment at the time under a Lord Hammerbrook in the town of Oldbridge [please note we cannot confirm where Oldbridge is as we have no records of a Lord Hammerbrook or a town with that name, but the diary seems to indicate it was close to the region historically known as Rhordia]. The following at some of the extracts that we’ve managed to translate so far. 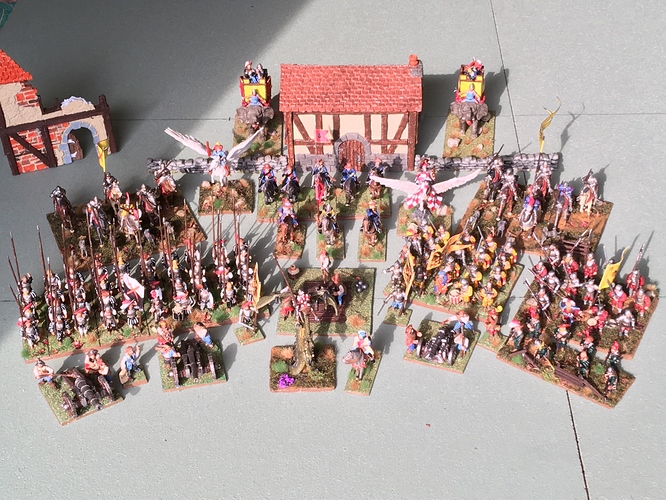 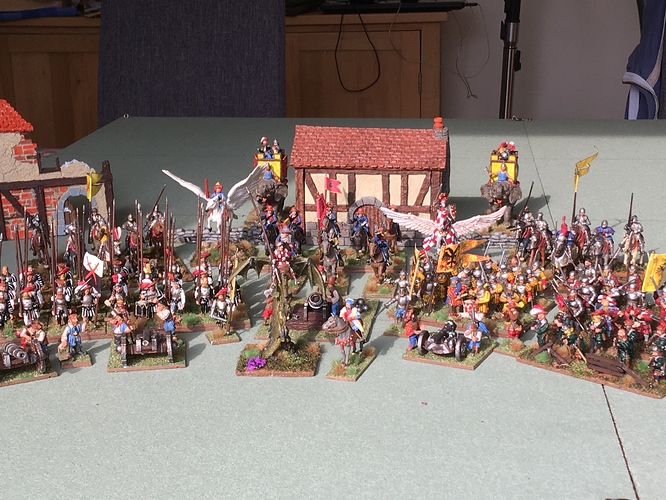 image4032×3024 2.15 MB
The Captain. He may be an arrogant bastard, but to be honest he’s earned the right to be. No one seems to know where he comes from or where he learned so much about fighting and tactics. I know for a fact that every prospective employer gets a different tale, usually one that supports that employers’ prejudices or helps us gain the edge on winning the contract. Wherever he learned to fight he’s bloody good at it. He seems to have an instinctive read for a battlefield and his ability to second guess how the enemy will deploy or to fooling them into deploying how he wants them to is one of the keys to his success. He’s also pretty handy himself in a fight. Not only that but the has some funny ideas about how the company should look and dress. He’s always going on about how “Lords who employ mercenaries can get their masses by rounding up the local farm boys – what they want from us is something that gives them an edge”. So, unlike most of the free companies in this area each of our units has its own distinct uniform and banners and when we arrive in a new town, we look more like soldiers out of the story books than the scum most of us really are. 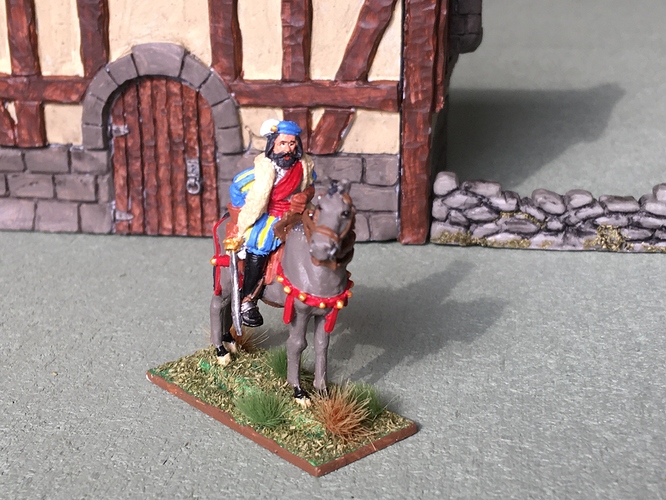 The Twins. A legacy from one of our previous contracts, the twins are the sons of a minor baron back in the borderlands who wanted rid of them so as to avoid any difficult succession issues when he upgraded his wife to a younger, better looking model! They fight for the company along with the retainers the baron sent with them as part of his general clear out of those with ties to his first wife. Don’t let their pretty armour and youthful looks fool you though. These guys are not the gallant, honourable knights you get in the stories; the twins are cold-hearted professional killers. Mounted on those big chargers they smash through enemies, and using that special link that twins sometimes have they often time their charges to hit together. You hear the impact when that happens, even in a messy brawl the other side of the battlefield. Not only that, but when they ride to battle, they’re each accompanied by a pack of the biggest, most vicious hunting dogs you ever saw. Leaping in ahead of the charging horses tearing out opponents’ throats and breaking up even the most disciplined shield walls. 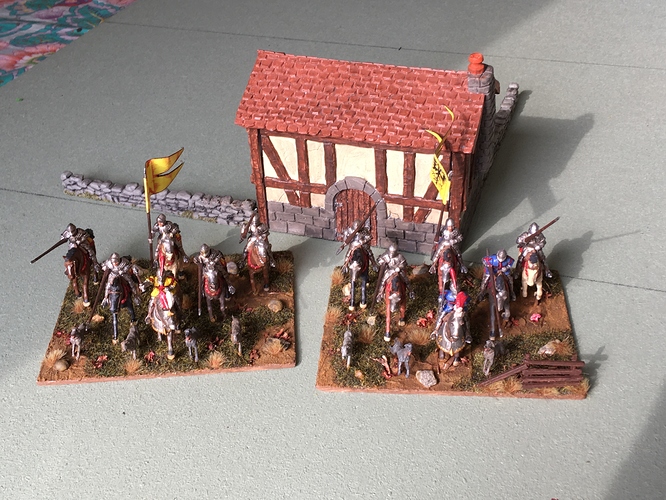 Sir Fanshaw’s finest. Much as I hate to say it these arrogant pricks are good. They wield those huge swords with skill and, once they get going, they usually make mincemeat out of the enemy. They were originally a separate mercenary band who we worked alongside on a contract we did with the Sea Elves several years ago. I don’t know how The Captain did it, but somehow he persuaded Sir Fanshaw to bring his company into ours. I suspect it might be the uniforms. Before we met them, they were your usual ragged mercenary band, although they always kept those swords clean and sharp. Now, they’ve taken The Captains’ ideas on looking great to heart and a bigger bunch of prima donnas you will not find for a thousand leagues! 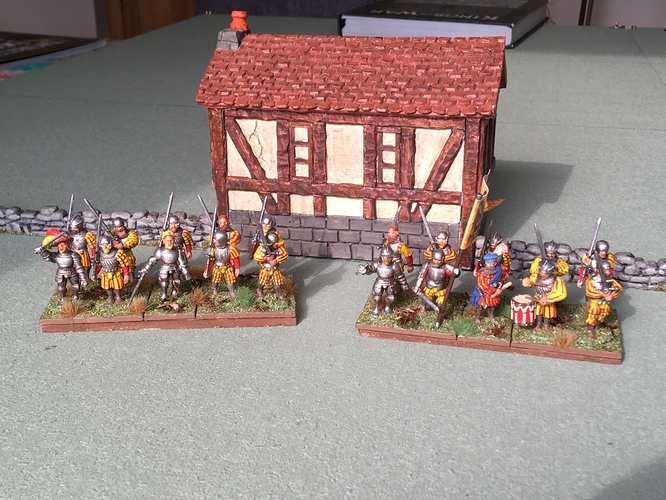 Black Pikes. Some of the older men in the company, but don’t let that fool you! What they lack in youthful vigour they make up for with skill and cunning learnt in many hard battles. The have done what many others failed to do and survived and with those huge pikes of theirs they are hard to take down and will often still be standing when all around them are dying or fled. The call themselves the black pikes, but the rest of the company calls them the magpies, not because of those ridiculous costumes, but because of their habit of looting anything and everything – often while the fight is still raging around them! 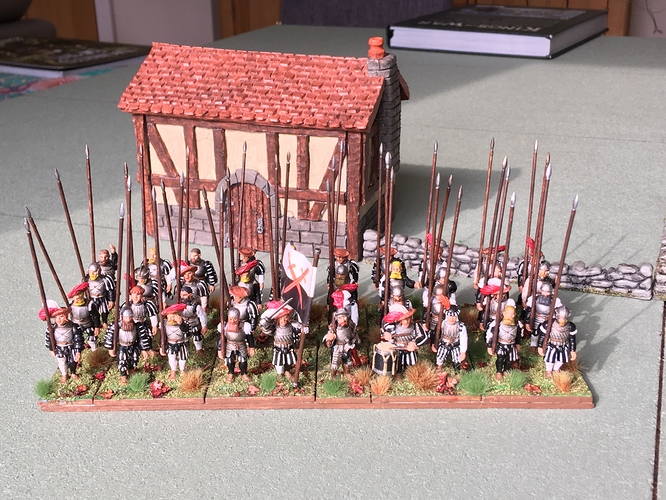 The Battery. Another of the Captain’s ideas is to always offer something that an employer cannot do for themselves, and in these rustic borderlands, well away from the more modern cities, that means gunpowder, and especially our cannons. The Captains calls them the masters of the battlefield, but the rest of us call them the Bastards; if you’ve ever had to manhandle a 3 ton cannon uphill on a muddy track, you’ll know why! We mostly use them for siege contracts, but I’ll admit they can be pretty devastating on a battlefield as well. 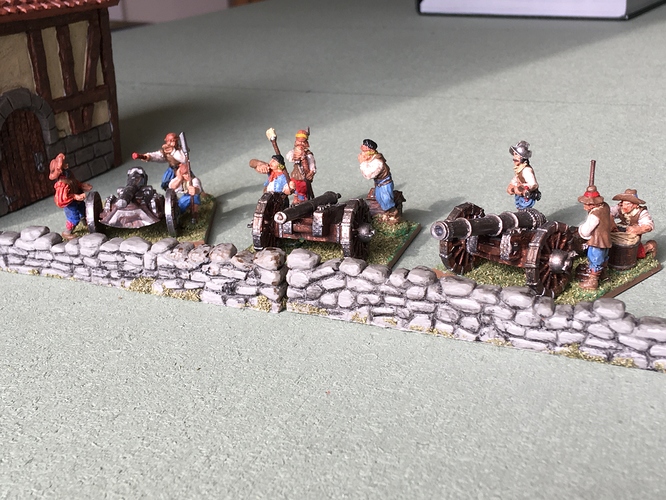 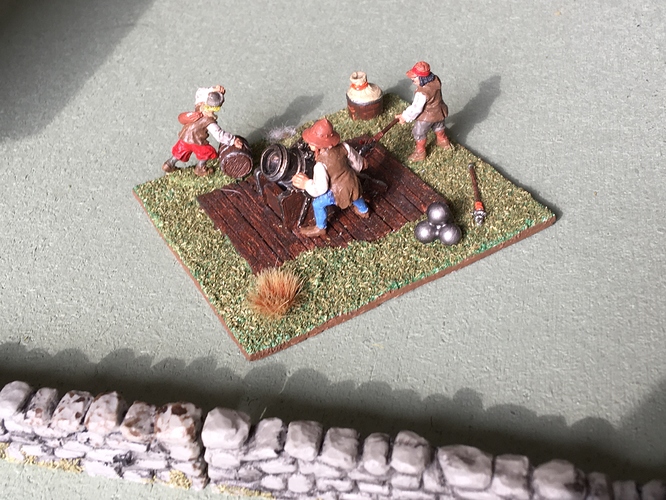 Bessie and Gertie. Another legacy from a contract many years ago that the Captain doesn’t like to talk about. I don’t know what kind of creatures they are but they’re big, fast and mean and when they get going nobody gets in in their way. 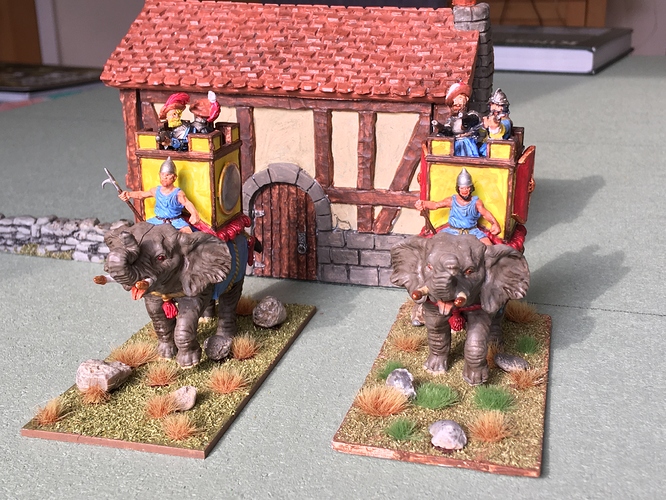 Outriders. The Outriders think they are gods’ gift to pretty much everything and they certainly aren’t shy in letting everyone know it, especially the girls in the towns and farms we pass through. They act as the company’s eyes and ears, scouting out the lay of the land and the enemy. Much of our success over the past few years has come from the information they gather. 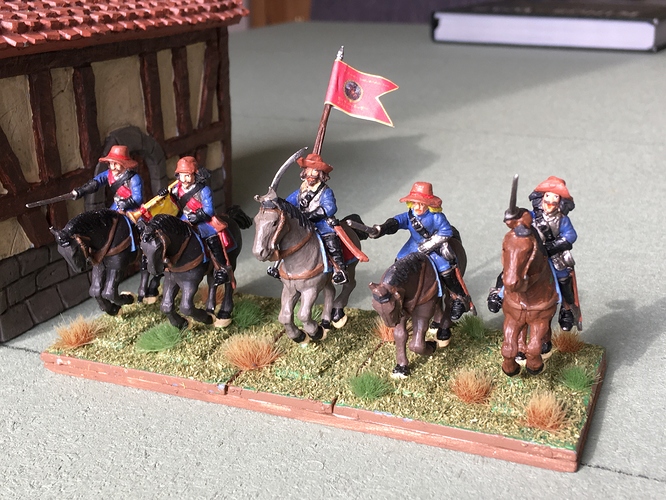 I love it, all of it. The painting is great, the basing is lovely, the terrain is awesome and the story is fantastic. It ticks all my boxes for a great looking force. Do you have any more you’re working on?

Thanks for the lovely feedback. Luckily for all I have quite a lot still on the to do list.

Another pike horde
Regiment of Footguard
Some Polearms
Enough riflemen to make a horde
And 3 more troops of light cavalry, some sergeants, some mounted scouts

Once I’ve done those I’ll be moving on to the Oldbridge city watch and the Black Eagles’ current employers.

Much of the background is already written, I just need to paint faster!