My sons decided we needed to add a human army to our collection, so Brothermark it is. I like the combination of strong cavalry, trash spam, and siege artillery. Thoughts on the following 2k list?

Only real concern is the infantry lack a bit of punch? Maybe ditch the bowmen troop and upgrade the swordsmen to monster hunters? Gives you a solid me3/de5 horde and you don’t lose a lot of shooting

Don’t take me too seriously, I have basically no experience with this. However, my instincts would agree with Sceleris, in that there are not enough Things That Hurt in your list. The infantry isn’t going to be removing units on its own; the schooters might with some luck and focus fire, but having them take off one unit if you’re lucky and then the Abyssal Hunt another one if you combo-charge (I don’t think they’re very likely to outright destroy an anvil unit on the charge? Correct me if I’m wrong), that leaves you very vulnerable to finding your only two options for hitting back misplaced, chaffed up, wavered, or dead at a crucial point.

My impulse, then, would be to trade one of the penitent hordes and the bowman troop for another regiment of knights (just normal ones). In fact, that gets you something suspiciously similar to the Green Lady list I’ve been building for the past year and half…

Thanks. I was thinking of the bowmen troop as shooty chaff (70 pts with phalanx), not as a real way to kill anything.

Basically Abyssal hunt plus skirmishers plus mounted priest as a fast wing to kill things (bane chant to help in the grind). Then the rest of the army as a giant pile of nerve and objective holders while the artillery chews through.

Other than skirmishers, any recommendations for chaff? The Abyssal hunt are fast enough they can out range most things so don’t need a ton of chaff, but the infantry will never get a first charge.

I know everyone hates the crossbowmen, but 24" range plus piercing(1) is tempting for a stand-off army.

I know everyone hates the crossbowmen, but 24" range plus piercing(1) is tempting for a stand-off army.

Yeah, cos they suck (unfortunately, as xbow units look cool)!

Yeah, I got the idea of them. One thing I’ve noticed in the three games I played so far is that if you have only one battlegroup which can cause serious damage, it’s pretty easy for your opponent to deploy in such a manner as to avoid them getting into the good stuff. Your shooters might help with that a bit, forcing them to move into bad positions, but I don’t know whether that’ll work out to be honest.

Maybe the artillery does more for you than I give it credit for, I dunno. At any rate, it can’t hurt to test it a few times, right?

I play Brothermark and I’d agree with @Sceleris, crossbows are simply not a good choice for ranged attacks. They don’t hit very often at the best of times and even less when moving or the target is in cover. I have had some success running arbalests; with two units and 4+ to hit you cause damage most turns.
I’ve also found using a spearmen horde with the Brew of Strength does give you hitting power and durability, particularly with bane chant, heal, veteran command, rally, battle hymns and inspiring available.

I like measured force on something like a pike or spear horde - decent number of attacks, will iften hang around a long time and means you can BC the flanking units!

Still updating and testing. What do you all think of this list? I’ve added in some lightning bolt today deal with gladestalker spam, which is otherwise tough to take off.

Oh no, the Penitents can come in Legions???

No additional Villein Skirmishers yet? I thought another unit or two of those would be near the top of things you’d want to add in.

Speaking from team-human, I think the Villein Bowmen might be a disappointment for you. Phalanx can make them a little harder to disrupt and dislodge, but hitting on 5+ is just rough. I can dig a regiment of archers as a cheap unluck or objective camper, but it is not something I am actively trying to fit in to my test lists as our shooting is so abysmal.

When we had your NA vs my KOM, we had your Ice Kin vs my multiple groups of Bowmen, and triple LB Wizards AND we got into a shooting war out in the open… and your Kin still handily cleaned my clock. So I don’t think the lightning bolts or bow shots will be all that effective against Gladestalkers, but I don’t know for sure as my experience against the elvish shooting is pretty limited.

The penitent legion backed up by a chaplain with battle hymns turn into effectively -/28 units. They’re nasty and cheap.

I really like the skirmishers and will probably try to find a way to get in another troop. With the bowmen, in my early testing they have done the best at points per damage given/received of anything in my list. On paper they’re awful, but in practice the two times I’ve run them they’ve performed really well. Maybe lucky rolling? We’ll see.

I’m debating going to Dragonfall in October. If I do, I’ll need to find a way to deal with gladestalkers. Lightning bolt seems to be the only option, or getting up in them quickly to disrupt. Maybe the wings on the hunter? I don’t have anything else fast enough to get there in time, and countershooting doesn’t seem to be that great. I don’t know.

You are way better at planning and list building than I. I think it might be helpful to determine how much you want to commit to fighting the elf meta vs your own core list and plans though. Finding that split and the available points might better determine the list route you want to try? Gladestalkers are still bows, so three avenues for list building come to my mind for the Brothermark to counter that:

Thanks–this is all really helpful. Lots to think about.

The main advantage I see of siege artillery vs arbalests is in taking down flyers or monsters because the combination of ignore cover, blast d3+1 (vs d3 for arbalest), and piercing(3) vs piercing(2) makes siege artillery worth it. They’re not as good vs regular hordes of infantry or counter-shooting (where arbalests have the advantage), but my list handles those options pretty well already.

It’s a solid list, lots of bodies and has loads of cool Brothermark-centric tools at hand. My two thoughts, one small and one big:

The shield on the Hunter is cute! I’d be tempted to give the Dragon a staying stone + aegis fragment for the same points, simply because the Hunter isn’t Def 4+, but given the scouting it’s probably a good idea to give the plucky little hero a leg up.

I got in a fun game last night vs @TastyBagel and tested the following:

I’m sure he’ll have another great battle report up soon, but a few quick notes:

For both Brothermark and Northern Alliance, I’ve been tracking damage output and effectiveness. Still a small sample size, but it’s interesting to see. Here’s average damage versus points per damage (so the higher the unit, the greater the typical damage; the further the right, the more cost effective the damage). The bigger the circle, the more times I’ve used the unit. You’ll see some units listed multiple times (e.g. Penitents) because of different unit sizes. I haven’t bothered to fix that yet, but the hordes have been the best performing: 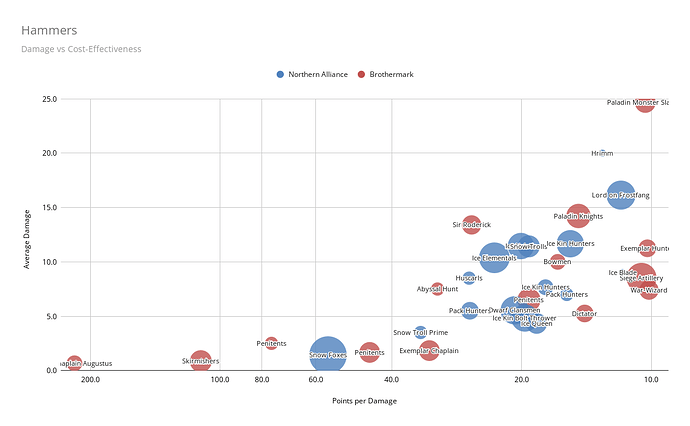 You can see that the expected stars are on the top right (Paladin Monster Slayers, Hrimm, Lord on Frostfang), while cost-effective but low-damage units are on the bottom right (war wizard, siege artillery, exemplar hunter)), and the chaff/specialty units are on the bottom left (Augustus, Skirmishers, Snow Foxes). Not a ton of data yet, but it’s fascinating to see the trends so far.

The Battle report is up! Posted on the blog here. I had a great time, and @Cartwright brought a very interesting list. Here are some of my thoughts, taken from the end of the report.

It was a really neat list. They Bowmen definitely surprised me! The Exemplar Hunters were very interesting as well, and loading the list up with heroes was really cool to see.

Re Abyssal Hunt - at regiment size they are so much better than regular knights - 25pts for CS1/TS1 over TS2, Fury, Vicious and Slayer its a nobrainer. About the only time you see knights in Brothermark are as hordes or as a ‘tax’ in the formation to get a cloak of death dragon!

The de5 infantry horde takes a lot to shift - 22/24 nerve and Iron Resolve, even without Rally and Heal support - and the damage output is still decent, just because of the attacks/me.

With the new CoK update, I’ve been trying to work in an ancient phoenix. Heal (5), cloak of death, and radiance of life on a 3+ regen unit with fly is great at 175 points. In three games, they look fantastic so far backing up piles of nerve.

What I’m struggling with is on the hammer side. Abyssal Hunt is just 16 attacks, so even though they’re high quality, it’s tough to take things off without a combo charge. Three siege artillery can help, but they’re awfully swingy. If they’re not hitting, I’m in a lot of trouble.