Call to Arms Tournament Round 1 - Undead vs Dwarfs

Call to Arms Tournament Round 1 - Undead vs Dwarfs

0. Setup
My second edition zombie troll + wights semi-elite melee-only lists felt kind of out of date in 3rd edition and infantry with dragons wasn’t working for me so far in 03rd, so I took a list I have never tried before. Originally designed for 2300, so at 2000 recommended points I only had 2 catapults, but it still has all the things you want in undead. Cheap slow 4+ hitting power., check. Amazing cavalry (with strider and pathfinder artefacts), check. Catapults, check. A killy individual to fix stuff and remove enemy artillery, check.
My battle plan was to hold the right flank and delay, kill the ironclad horde on the left with a double cav charge and wrap up that entire flank with ease, then turn around to clean up the rest.
Well… it was a good plan while still in my head. 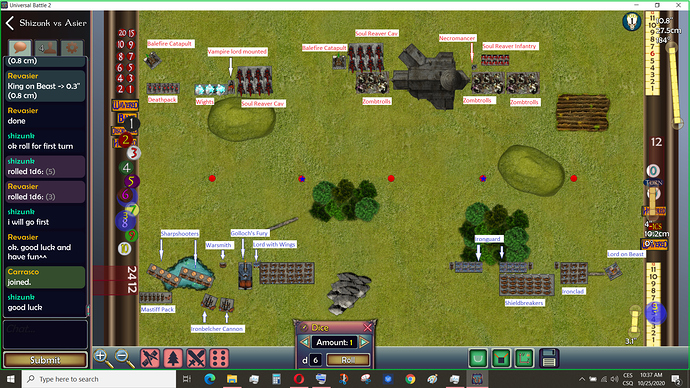 1. My 1
First turn nothing fancy. Move up, make sure to keep firing lines open for catapults (that took me some time to do at setup. It was my third ever game with long range artillery and in the previous ones i misplayed the catapults pretty badly, blocking myself all the time). My thinking was to kill the enemy’s cannons and outshoot him in the long run. Unfortunately I had to shoot two different targets, which the cannons easily survived.
At this point (yes, not before I charged carelessly into shooting range, it was after ) I ran the math and came to the conclusion that my cavalry has a pretty good chance of surviving, even if I took a bit of a risk by exposing them. 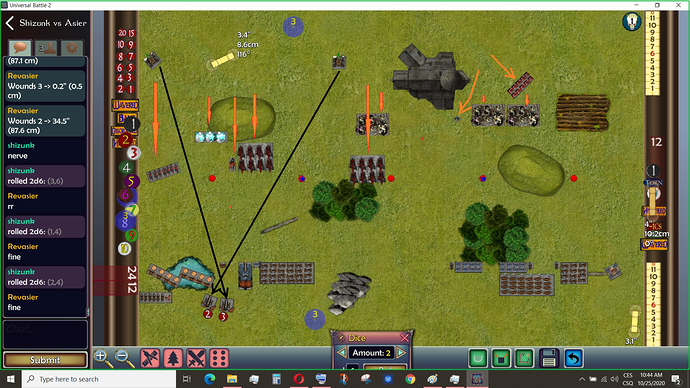 Turns out my opponent is pretty good at hitting with his cannons (3 out of 4 hits on 5+). And sharpshooters. And Golloch.
My Vampire cavalry died shredded to tiny pieces. There goes my entire battle plan. The chance to overwhelm the left flank is now pretty much gone, just like that. At least the deathpack on the left survived.
Also, I completely forgot that he has his flying lord and my wights therefore became almost useless. 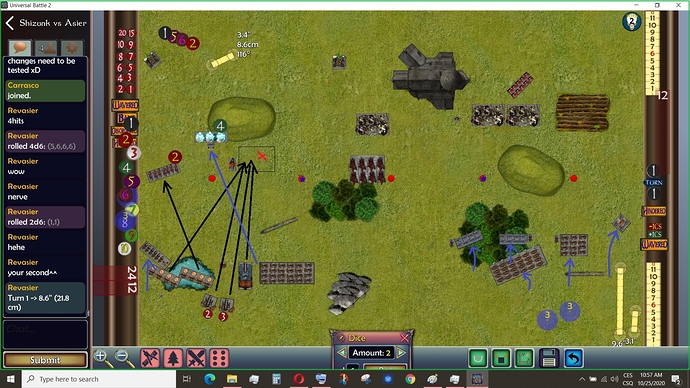 3. My 2
Time for a new plan. Overwhelm the right flank. Delay and annoy the left.
I finally manage to kill his cannon, but the other catapult fails to do any damage. From now on, both my shooting and my necromancer manage to do a whole lot of nothing until the end. Just great. 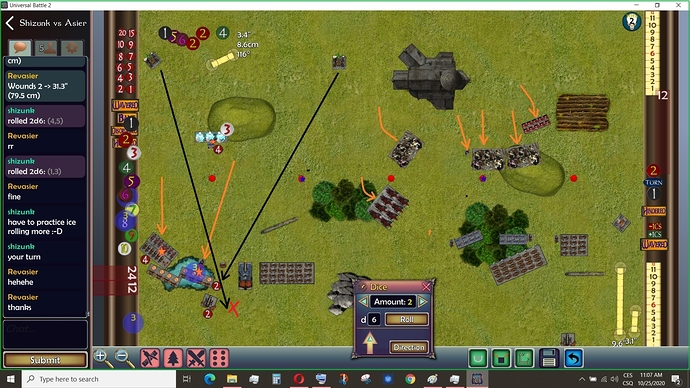 My second and last cavalry regiment came within one point of getting wavered. The range on that damn shooting is just stupid… Sharpshoters move back to delay my vampire lord. The Dwarf lord on beast is just our of charge range of my vampires, preventing them from going forward to help because at troop level, their nerve sucks.
So far I still feel confident. 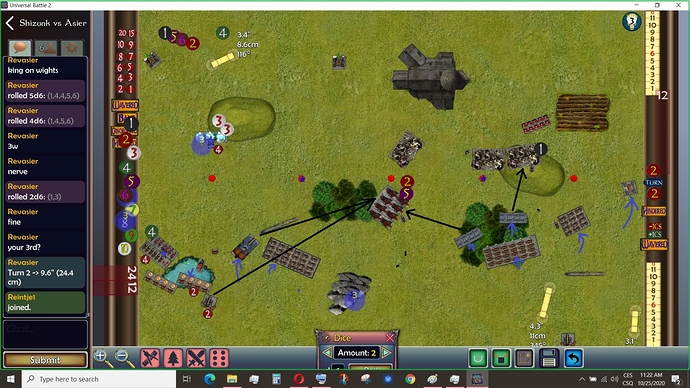 My vampire lord still didn’t kill the sharpshooters. Catapults missed. Wights just barely fail to kill the flying dwarf lord. Vampires had to hide in difficult terrain and also move aside to get a better LOS. Not at all what I had planned for them.
However, zombie trolls and vampire cavalry do what you would expect from them. They smash def6 just hard enough to kill it. Cavalry is now both outside of cannon front arc and safe from the shieldbreakers. Luckily, trolls managed to win their combat and get to turn to face retaliation with their pretty undead faces. 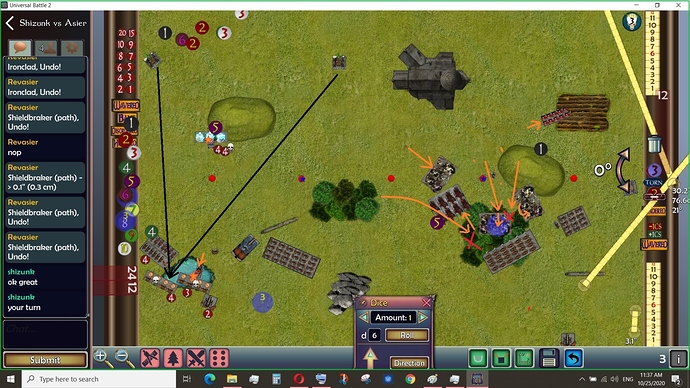 6. My honourable opponent’s 3
Wights are dead, catapults exposed, deathpack gone. Dwarfs are now marching to take the center loot counters. My left flank predictably collapsed. On the right, the enemy is clearly demoralised though, both troll hordes survive. The shieldbreakers were actually in a good position to ruin my life, because I of course forgot they have pathfinder. Who in their right mind puts pathfinder on a speed 4 second line unit? Only lady luck saved me from a catastrophic lack of attention. After those lucky first round shots, I probably deserve some help though… 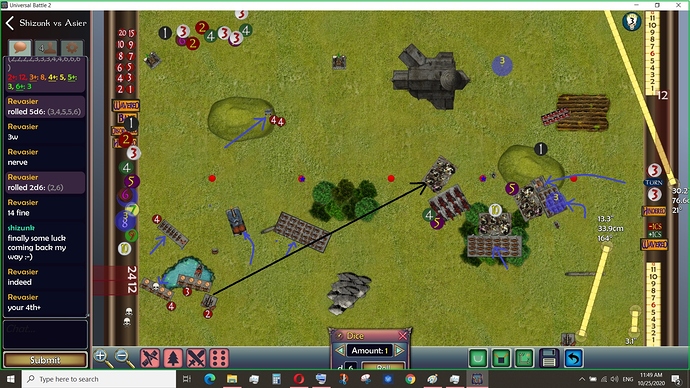 FINALLY. Sharpshooters die. There is no way shieldbreakers on the right could live faced with the combined might of zombtrolls and vamps. Everything else on that flank is wavered, so why not turn our backs at them… Also, first loot counter is claimed by the glorious undead horde. 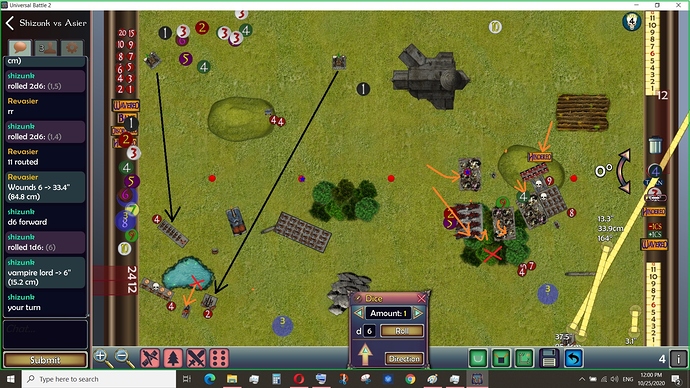 8. My honourable opponent’s 4
Right. Did I tell you how badly I overestimated my understanding of the enemy list? Turns out, those wavered dwarfs have headstrong! I still manage to hold, but this could have been very, very bad.
Also, I am kind of glad that stupid useless catapult was put out of its misery. 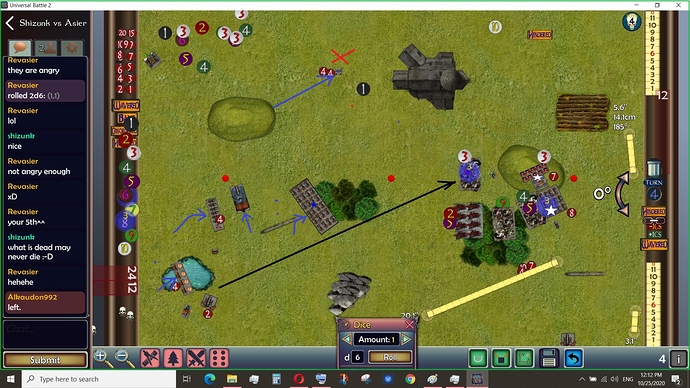 Enemy shooting almost gone, now is the time to move on the center to claim an easy victory. Already pretty beat up, the dwarfs on the right will of course die. No problem. Except, one didn’t. Wavered again. 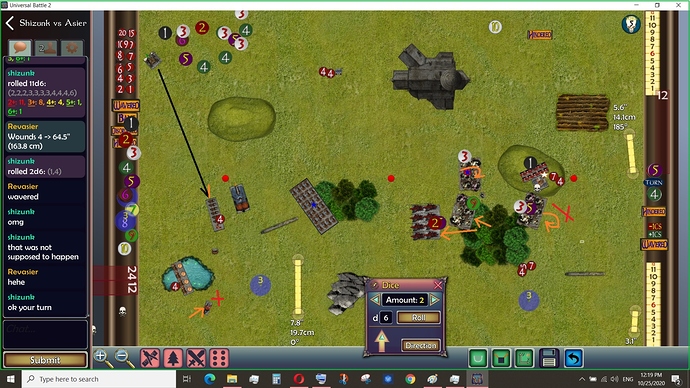 Headstrong. Again. The dwarf lord takes a loot counter and escapes my front arc.
Sharpshooters are fine, but they are not cannons, so luckily, my cavalry doesn’t die. Also, flying beard was just barely out of any charge range… Victory points at the moment: 4:2 for dwarfs. 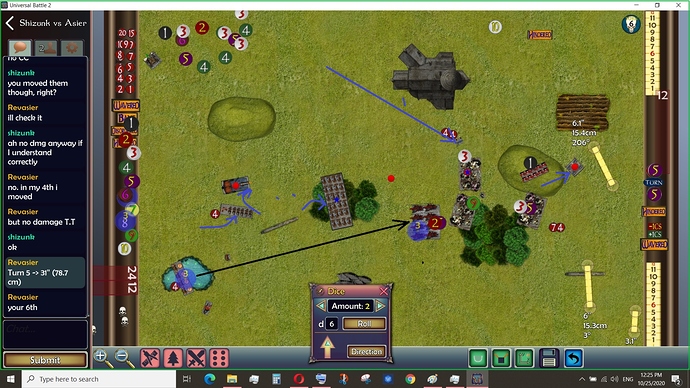 Only surge saves me from a really embarrassing situation. With it, I squeeze just enough nimble hyperspeed out of my notouriously slow trolls to charge the lord’s flank and take the loot counter. Because I need that surge now, it is not available to grab the loot in the center.
With the last of enemy shooting gone, only the flying lord is a real threat.
I keep daydreaming about my glorious 6:1 victory in turn 7. Score so far 3:3 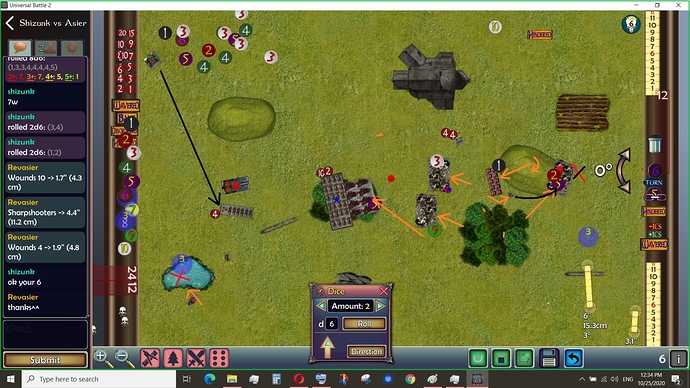 I think I deleted the last screenshot. Nothing really happened though. Flying lord tried the impossible: to single-handedly kill a relatively fresh zombie troll horde and secure a win. It was, however, almost impossible. Now I am just looking forward to that juicy turn 7. I roll a 1. The end.

We played without chess clocks, it took 2,5 hours from start to finish, including setup and technical difficulties (I had to reinstall the game and my computer froze halfway through). Ideal, relaxed format in my opinion. My opponent was exceptionally friendly, there was no disagreement, no super long thinking. Outside of tournaments, this is pretty representative of how long my tabletop games tend to take with most people.

Shooting is good when the opponent plays it and bad if I try it. I am considering going back to a 7-hammer slow melee list I had so much fun with in 02nd edition.
Vampire cavalry however is better than I expected when looking at third edition version of the unit. I don’t have any models for it outside of the electronic realm, but I may reconsider it. There is an underscribable feeling of coolness running a somewhat vulnerable (by undead standards) super killy unit with lifeleech 2, able to come back from a bad situation if you let it. Also, charging into cannon fire is much more fun with vampires than revenants, be it foot or cav version. Don’t ask me why. Just try it sometimes

When I consider the number of mistakes I made and the complete loss of hope on turn one, it was not actually all that bad though. I would have easily won on turn 7 and although it was in the end a draw, to my surprise, the killpoints were decidedly in my favor.
Playing against infantry dwarfs is fun, because my otherwise slow shambling units are now considered fast in contrast. I had the option of redeploying to the opposite flank, while my opponent was pretty much stuck with the setup he chose. And with the exception of the shieldbreakers, most of the infantry just isn’t much of a threat…

Looking forward to round 2 of the tournament. I may test some B’seylyan ( omg this kills me every time I try to say it) angelic shenanigans… There is never a better environment for testing new things than a competitive one… 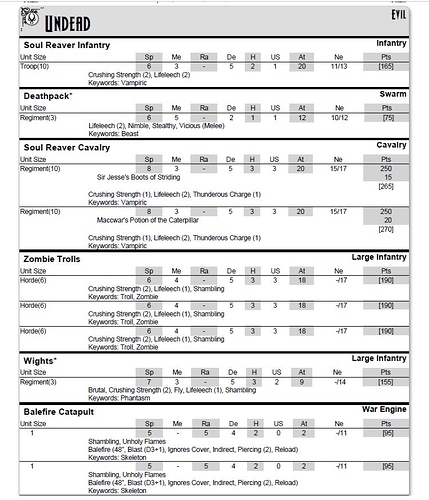 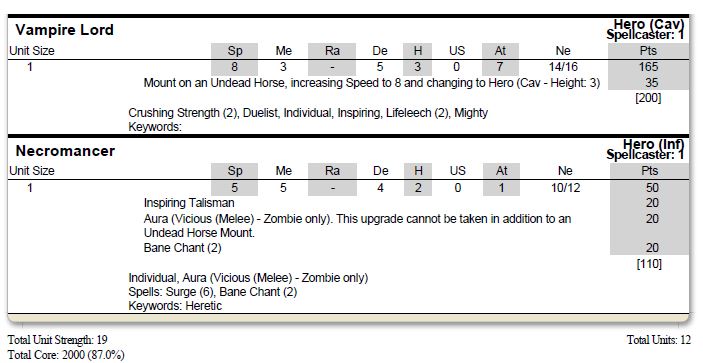 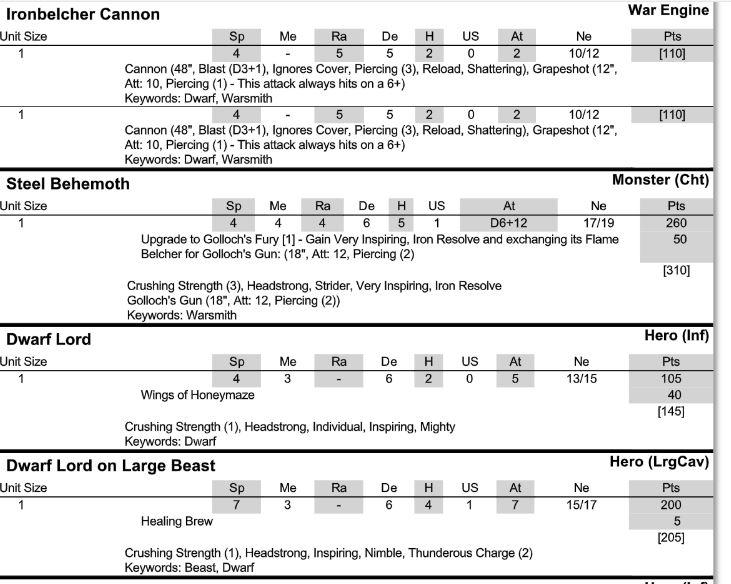 Thank you for sharing!

If I may, I recommend cropping the screenshots to the actual battlefield. That’s the bit we want to see and the rest makes it smaller and harder to see.

That is a good point. It looks fine on my screen but the forum page makes everything a bit too small… I could even have one screenshot of all the terrain and then cut the parts of the battlefield with no units on it to have maximum zoom. I already have a few other improvements planned…