(Copied from my blog)

The club got really stoked about the new v3 of Deadzone, with the promise of fast-play exciting skirmish and no tape measures. I’m not really into scifi but always happy to throw dice with friends, so when my mate MP offered up his Space Marine collection to use as Enforcer proxies, I was in. JR went crazy with his 3D printers and churned out two entire tables worth of terrain, AC crafted a campaign structure and narrative, and I made some campaign tracking spreadsheets. 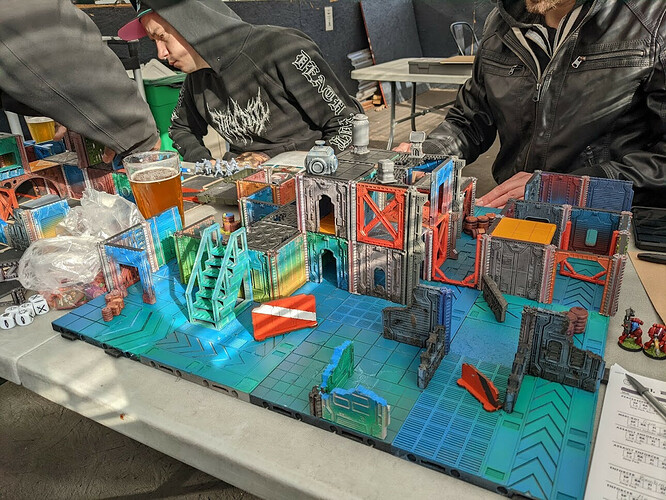 (Just one of JR’s technicolor tables. Note how I strategically chose the tableside with the sun at my back to demoralize my opponent. Muhwahahaha!)

Now, there’s a delightful story seeded by AC that feels positively Coen Bros-esque as six different factions unwittingly stumble into each other and things go sideways, but I can’t do it justice here. For now, I’ll just say that my opponent’s Asterians were attempting to capture an old Armory (Scenario 8: Occupy, but with Fortified Outpost as the stakes for reasons) and I needed to stop them and hold it for my own ends.

From my Battle Force I assembled a Strike Team with Jump Packs and Defender Shields galore with a mix of ranged, AP, and assault weapons. My plan was to get onto the objective tower ASAP, rack up VPs every turn, and weather the ridiculous Asterian shooting. If they closed in to contest the tower, I’d probably have the advantage in close combat. 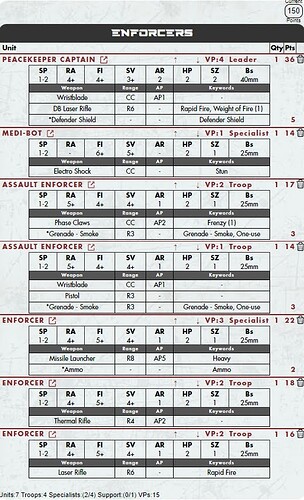 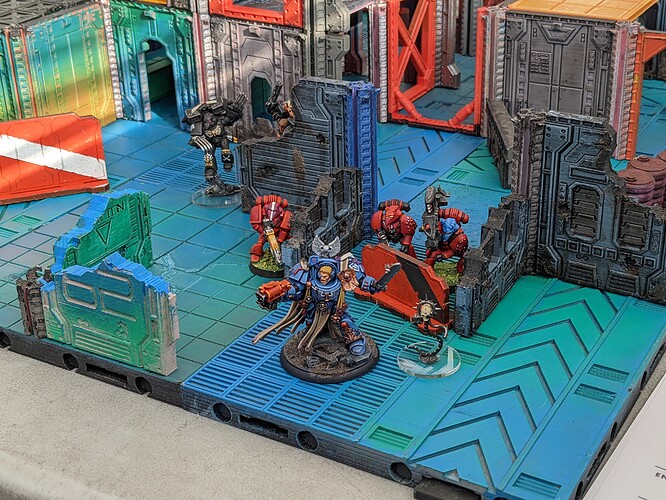 (Back to front, left to right: Hämrye, Reuben, Monto Crispy, M. Croak, Bombmi, Capt. Dagwood, Gyro. For some reason one of the scrolls on a model has “Ham” and “Rye” written on it, so now my names are all sandwich themed.)

My opponent certainly had a say in that plan. Yeesh! Despite my confidence in SV 4+ HP 2 models, he still got 3 kills pretty quick. But once the close combat models got stuck in and the Medi-Bot fortified the tower, I just barely eked out a win.

Sort-of! Despite Deadzone being a pretty elegant system there are some fiddly bits with a learning curve, so we got quite a few things wrong. It could have been anyone’s game, so we’ll leave it asterisked. 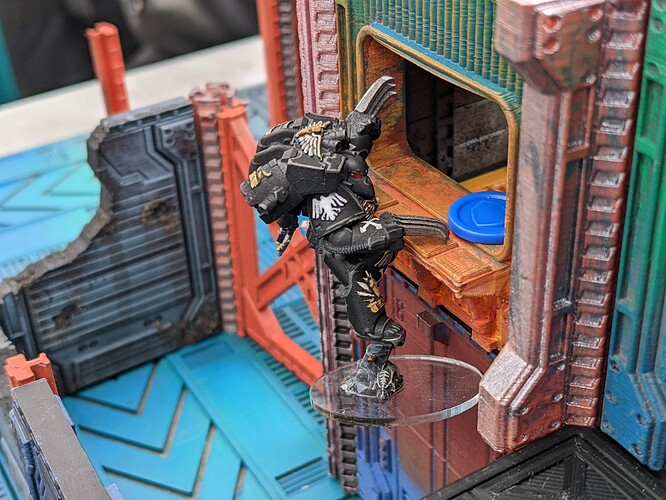 (We couldn’t actually fit the model through the window so we just left him here for a turn. He ordered two tacos and a diet Coke. )

It was a Pyrrhic victory anyway. Post-game unfortunately resulted in one dead troop (RIP M. Croak), another crippled, and all my profit going into replenishing supplies. Good thing I’ve got a deep bench to draw from!

Nice report. Good to see some Deadzone on this forum.

Nice to see that actual space marines can represent Enforcers. What space marine guns would you recommend as stand ins for enforcer guns?

Bolter as Genling rifle, Melta as Thermal rifle. Rocket launcher is present in both systems, flamers too. An autocannon (and the loyalist equivalent) would do as a burst laser. Sniper rifle from SM scouts.

Then you’ve got the Fusion rifle, which might be plasma?

Yes, I forgot that one.

Originally posted on my blog, which also better displays the images with overlay sliders.

A massive spike in COVID cases in our area put the Deadzone campaign on hold for a couple months, but we were finally able to restart.

This is my… third? time playing Deadzone. I cannot convey how quick this game gets you into the action. Like turn 1 bullets are flying! Here’s deployment: 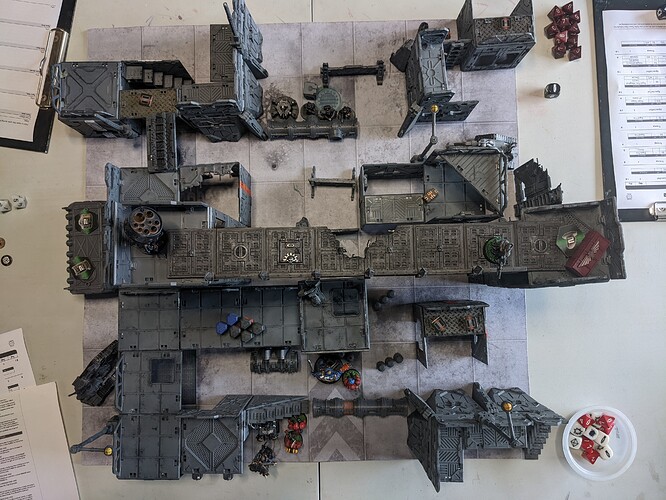 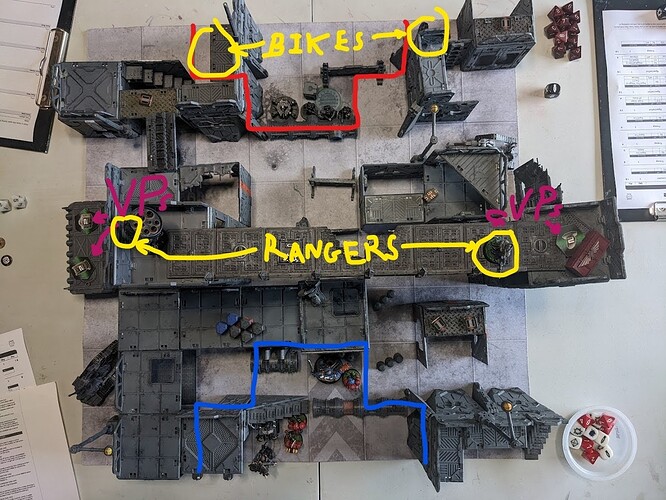 You can see his sniper is in perfect position, camped next to VPs, and with great LOS to my troops when the ambush is sprung. Oh, and he won init, had AP ammo, and he rolled an extra shoot action with his command dice… So the game begins and before I’ve even done anything there’s 13 attack dice raining down on my strike force…

And nothing happened! Defender Shields! Medic! Bastion! Survive 4+! And some bad rolls on my opponent’s part meant the Enforcers just shrugged off the Ranger’s shots. I think by the end of the turn I had one Wound on a model but I found a MediKit and quickly patched them up.

But relief quickly turned to sorrow as the GCPS Rangers and Monocycles were able to sweep out and snag all four objectives on the first turn. (The action is fast and furious in this game!) Since we were short on time and so only played with 125 points each, my opponent racked up 8 out of the 14 VPs needed to win right out the gate. Eeep!

But I still had a shot. Frankly, I did not see a path to victory, but I did think I could pull off a draw, with both teams hitting 14 VPs on the same turn. So I moved my troops up for a turn 2 assault that would put everything on the line… 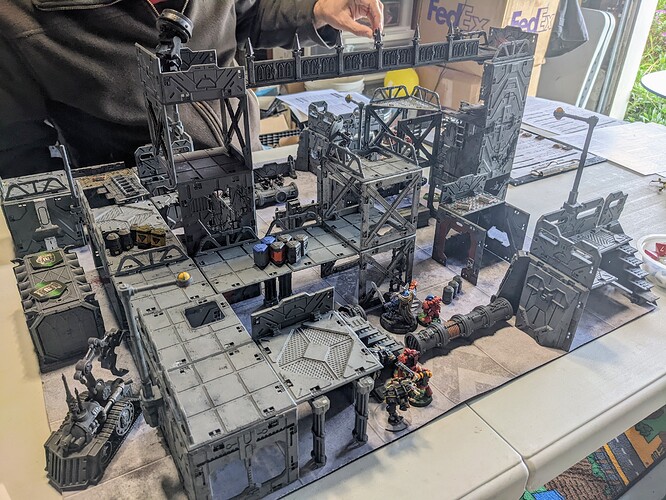 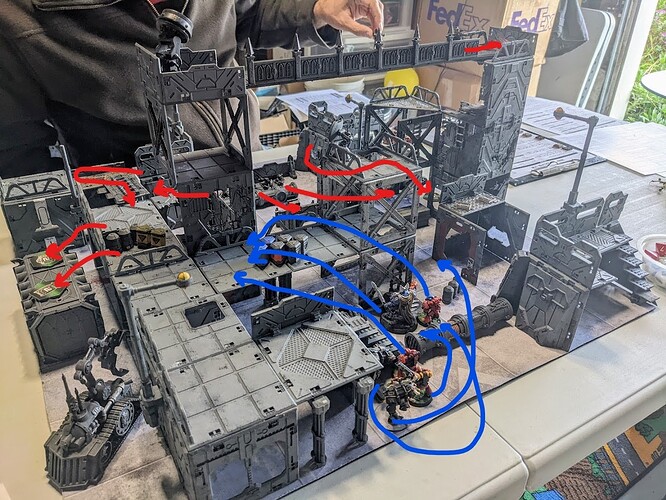 And wow did it pay off! Good command dice got me almost everything I wanted. My Peacekeeper Captain leaped into hand-to-hand with the Ranger on the left flank and… it was ugly. 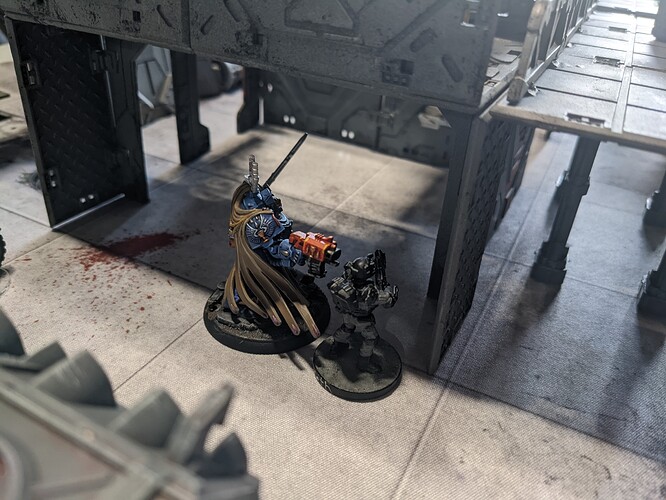 Despite the AP3 Thermal Mines, Capt. Dagwood was unscratched. The Ranger not so much. Then an Advance command got Dagwood to the Marine Monocyclist on the adjacent objective and *< splatter noises> *. 2 enemies down and two objectives captured in a single activation is pretty great.

On the opposite side, my Incinerator-toting Enforcer, “Hot Dog”, set a poor soldier on fire. 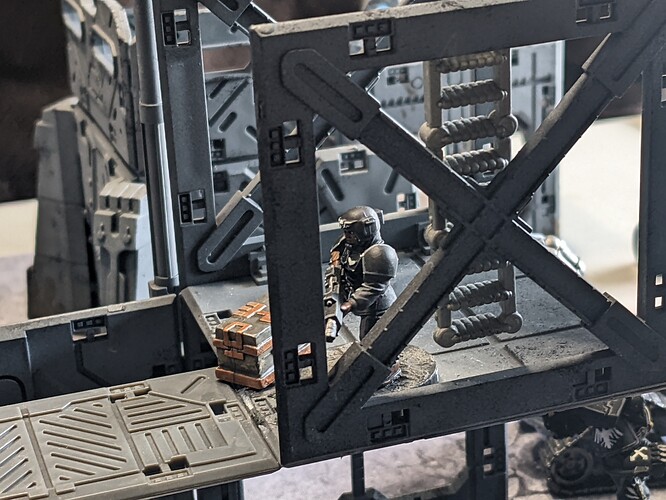 Flames. Flames! Flaaaames…on the side of my face, breathing, breathless, heaving breaths.

Meanwhile, Pvt. Hämrye rocketed over to the other GCPS Monocycle and decapitated the rider. 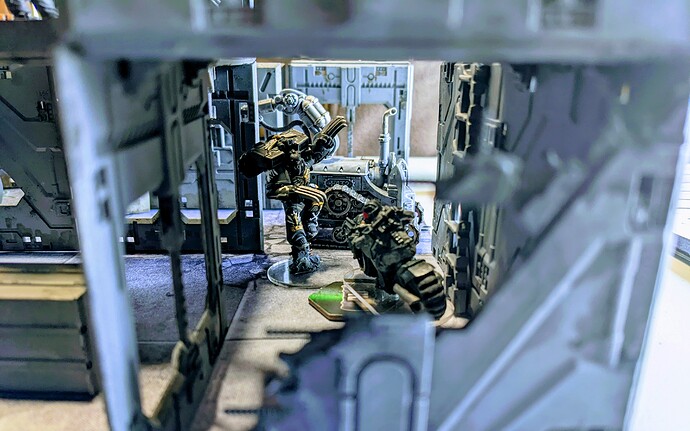 Thanks to dice luck and a lot of Armor, only Hot Dog took a wound in return fire. At the end of Turn 2 the score was 10-9! I was catching up! Heck, could I even win it? 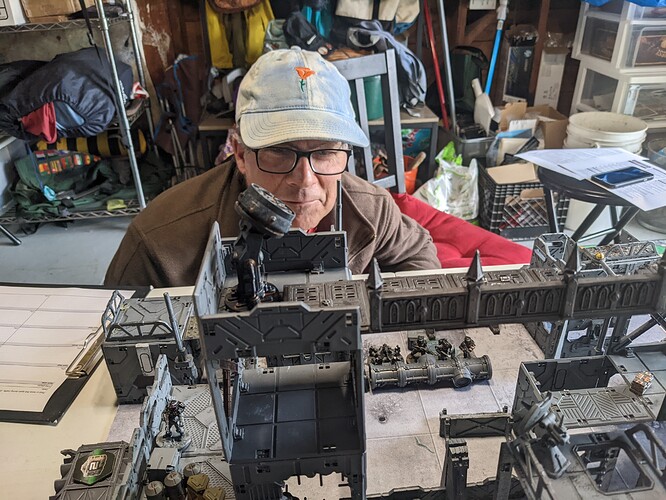 My opponent thinks not.

On the third and final turn, my Captain ripped a Tactical Drone apart giving me another 2 VPs. And I currently held 6 VPs worth of objectives… And my Assault Enforcer was in position to kill the sniper and snag 4 more VPs! If I’m really lucky I can win 21-10! Dare I hope?

As the turn went on, that margin got smaller and smaller. First my Assault Enforcer, Lt. Reuben, landed next to the Ranger, who stuck a Thermal Mine on Reuben’s chest and kicked him back off the ledge… OK, well I can still win 17-13. Then the GCPS leader assaulted my other Assault Enforcer, Pvt. Hämrye, on an objective with yet another Thermal Mine and I whiffed on my rolls. Hopes dashed. The turn ended 15-17. 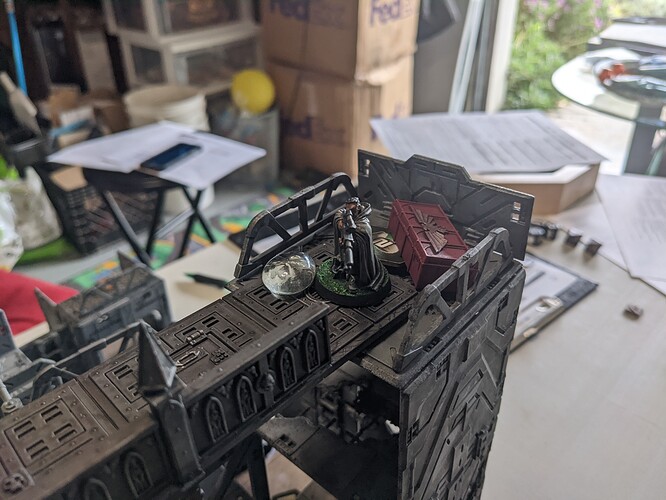 Fun game, crazy fast and intense, big luck swings but still tactical and accessible. Good times. And I was very happy to end up with a draw in that matchup.

Very fast and furious and fun, and a nice Clue reference to boot.