One of the reasons i opted to build my mythological De Danann army as a Herd army, was because it had chariots in it. However, on closer inspection, the actual unit in the Herd army is a combat oriented one, rather than the Celtic chariot role in warfare which would have been more of a hit and run unit, designed to move around the battlefield quickly and fire javelins/slingshot at the foe before running off out of charge range again.
Given this, i’m wondering whether to field my chariots as a regiment of Centaur Bray hunters, rather than Minotaur Chariots, as this would closer represent their role in the army. Would this be confusing to my opponent however?

As long as your chariots clearly have a ranged attack and do not involve minotaurs I think it’s great.

many thanks, @DarkBlack. i’d forgotten one important thing. i want a Great Cheiftain on a chariot, so it might get confusing. i’ll just have to my chariots as a hammer, and not as they were historically used.
Kingdom of Men use chariots for fast archers, but i think they are irregular and therefore not suitable to use as allied i think. An all KOM force runs into similar problem in that the hero doesnt ride a chariot.
The models are also more suited to a chariot base of 50100 rather than 5025 or regiment size of 100100 rather than 100125.
Clearly, there was a flaw in the logic regarding the rules for chariots as they do not match most historical basis as far as i can see. Most of the chariots used in warfare were light. They were used to harry the enemy using hit and run tactics, with limited heavy chariot (the Hittites) use for close combat or ramming into the enemy with scythed wheels (Persians) .

The Elf & KoM chariots best represent the historical usages (mainly shooting platforms), some of the others are rather more ‘unsubtle’ (and don’t suck quite so much in-game!)

Shooting units in general suck in 3rd edition… i think they dampened them all down when they changed from 2nd edition, but got carried away with themselves and lost the plot altogether,

There was an issue with v2 chariots for some army builds (Elves & EoD), but yeah, went to far the other way.

If the only ‘chariots’ in your army would be the bray hunters and an actual hero on chariot don’t think it would much of an issue if modelling was clear.

thanks @Sceleris, as suggested elsewhere, it might help if i added a few bowmen on foot to the base to avoid confusion, (or better still some slingers once i get my Atlantic Irish box). i’d be using a 100x100 mm base for chariots, but a 125 x 100 base for a regiment of Bray Hunters, so i’d probably need to put 3 chariots on there plus 6+ horses and men to make it look suitably populated for PMC, 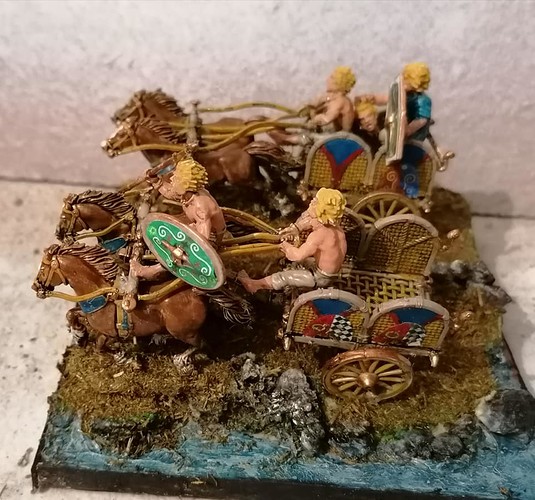 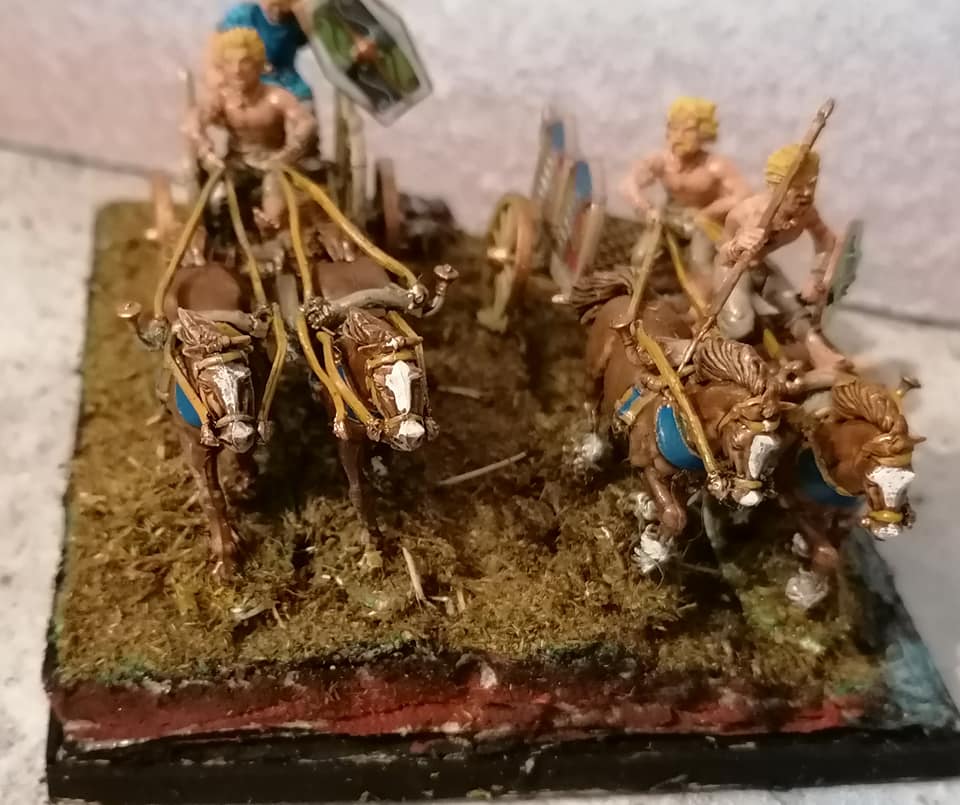 They were used to harry the enemy using hit and run tactics, with limited heavy chariot (the Hittites) use for close combat or ramming into the enemy with scythed wheels (Persians) .

Heavy chariots were also used by the Chinese during the Warring States Period (the period that The Art of War was written in) and by Classical Indians (i believe that they used both types, but I’m not sure).

In the case of the Herd, chariots pulled by minotaurs are probably heavy chariots and there are many other lists with light chariot equivalents.
The issue is representing something that was made obsolete by cavalry relevant in in a game that also includes mounted knights with stirrups.

In the real world better horses made both types of chariot obsolete.
But chariots do look cool and have a certain style.
In a fantasy setting it seems to me that monsters and beasties can make some kinds of chariot more viable. But it’s fantasy! Cool vs realism I know what I want! Or I would just play historicals.

I’m my own opinion I think chariots were useful as a sort of jack of all trades. You need to annoy an enemy with a mobile shooting platform, you can do that. You need to scare and run down foot troops that don’t have strong formation? You need to drop off a bunch of elite guys to hold a hill or bridge? You need to counter enemy cavalry or chariots?
Chariots could do most of this fairly well for their time. sort of a jack of all trades master of none.

If you want to run them as centaurs you could make a 25mm by 100mm strip of a base that you could magnetize to the side of this one?

If we ever did play (unlikely as I’m stuck the other side of the world) I wouldn’t mind you using them as KoW chariots or similar.

thanks @DarkBlack + @Muakhah . In an ideal world, i’d like to get as close to historically accurate as possible, but it is a mythological army, where little is nailed down as hard fact, being passed on verbally from generation to generation, so we are hovering into fantasy at the best of times, but that’s part of the fun.
For simplicity sake, i’ve decided to go for using them as chariots, especially given that 3rd edition dampened down missile warfare so much, and that even Celtic Ireland/Britain relied heavily on this hit and run style to defeat their enemies, including the might of Rome . Eventually, even in Ireland, the mounted Cavalry unit overtook the chariots, although i’ve always loved them. i even built a couple and used them daily for many years, although my own were single horse, not teams,

yeah, having chariots alongside proper cavalry is a bit of an oddity, though at least in KoM they operate close enough to historical uses you can argue they were included to allow for stuff like bronze age armies or the Egyptians to be properly depicted. for Herd they suffer from being adaptions of the GW fantasy beastmen… where chariots were treated more like battering rams as far as combat style.

personally, for my Roman-arabic desert themed army, i’m planning to use chariot stats to depict Dromedarii camel riders… which the mix of archery and melee do a decent job with, and they’d still be different than the cataphractarii heavy cavalry or the light horse archers planned for the army.

Note that celtic chariots don’t shoot in most ancient rules, they are close combat cavalry units (with javelins factored into close combat). Likely not as good as minotaur chariots (which are more like heavy knights), but heh it is fantasy.

This is in contrast to Egyptian/Syrian chariots etc. which did rely on large amounts of good archery.
Scythed chariots on the other hand would be more like a Goblin Blaster. A one use expendable wrecking machine (that usually didn’t work historically).

Note that celtic chariots don’t shoot in most ancient rules, they are close combat cavalry units (with javelins factored into close combat). Likely not as good as minotaur chariots (which are more like heavy knights), but heh it is fantasy.

this is because the Britons[1] used chariots differently than most of the middle eastern cultures. in the ancient middle east chariots were for the most part used as fast moving archer platforms. occasionally you got some outliers like the Hittite ones, which in addition to the normal ranged type would use a type of heavy chariot carrying a lance armed crew, used in the same way as later shock cavalry. (which made the Battle of Kadesh between the Egyptians and the Hittites so interesting)

the Britons though used them almost closer to the Mycenaean Greek model… as “APCs” used to carry warriors who would dismount and fight on foot. but the Mycenaean only used them as off-battlefield transport (basically Limos so the leaders of a force didn’t have to walk) while the Britons used them on the battlefield itself, and en-mass to deliver forces of warriors onto enemy flanks. they worked well with the more guerilla style warfare the Britons were using against the Romans. though whether they were used in such capacity during interclan warfare prior to the roman arrival isn’t known. i suspect they did though, the romans were very impressed with how skilled the Britons were both in their piloting ability and their ability to make use of the mobility the chariot brought, and that suggests long experience with that style of warfare as a culture.

[1] i say Britons here and not Celts, because the use of chariots was only seen with the tribes and clans of the islands the Romans name Britannia. while the native Britons were heavily Celtic in culture, there is strong evidence they were a very different ethnicity than the Celts of the mainland, and became ‘celtified’ through trade and long interaction. between that and the various non-Celtic traits of the Britons, it is worth separating them when talking about stuff like this. of course there is evidence that the mainland Celts did use chariots in the bronze age (we’ve found some rock carvings of chariots and stuff) but we don;t know how they used them or how extensively. nor whether such chariots were their own development or something they adopted after interacting with some of the Mediterranean and middle eastern cultures. (the bronze age empires such as the Mycenaeans, the Phoenicians, and a bunch of others are know to have traded with mainland groups deep within Europe, and sail as far as the British islands in search of tin to support their bronze using cultures.)

Yep my thought was , it is rather more justification for them being used as the chariots instead of the Bray hunters in Herd list, especially becuase the warriors jumping off them would tend to be the most elite warriors as with Mycenaeans /Trojans etc

Some great points raised here. Hopefully, if Mantic ever get around to a third edition historical rules, they will take that into consideration, as it seems that Celtic vs Roman or Celtic vs Norse are popular army options, as well as Chinese and Mongolians. i’d love for my own Mythological De Danann army to face Romans or Norse invaders, or even Britons across the battlefield, where the nuances of the light war chariots could have an impact, as much as the Roman phalanxes did.