Creating an all mantic rhordian army

CREATING AN ALL MANTIC RHORDIAN ARMY

The Rhordian army sits amongst the Uncharted Empires. It has rules for including Rhordian armies in the game but Mantic does not support the army with dedicated models. This is a shame as there is much of interest in the army list, the background fluff is interesting, as a neutral force there are opportunities to build an evil or a good leaning army and the army does not match, for instance, any army previously run by GW, and so the IP rests with Mantic.

So, how does the aspiring general recruit an all-Mantic Rhordian army? The answer is to raid other Mantic armies, and even other Mantic games, for suitable units. This, of course, runs the risk of creating a hotch-potch of units with no unifying character and thought is required at the start of army building to ensure army-wide cohesion.

The starting point is the background fluff. My Rhordian army, The Cult of the Dead, represents the Dukedom of Swalland. This province is unusual in Rhordia in having a large standing expeditionary army that has fought extensively beyond the Rhordian borders. It was particularly active during the War of the Abyss where it came into contact with Abyssal forces of all types. On the army’s return to Swalland, other Dukes became suspicious and accused the Dukedom of having been tainted by the Abyss. Indeed, some of the Duke’s subsequent actions bought the Dukedom into conflict with the higher echelons of the Church of the Children and the threat of excommunication.

Based on the background fluff and the requirement for a unifying army-wide look, I decided that:

So, with that decided, it was time to start preparing the army.

One of the unique units in the Rhordian army is the Dogs of War. For this, I used Loka chess pieces with the hand weapons removed and replaced with spears. The same treatment was given to another horde to represent a spear phalanx. 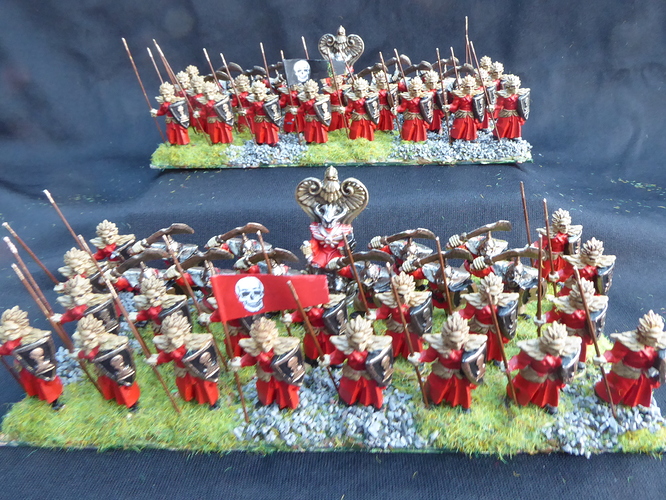 I believe that the yellowLoka sets have now sold out and so this is no longer an option. As an alternative, Basilean spearmen could fill the bill. 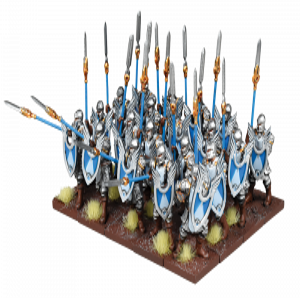 For Pole-Arms, I raided the red Loka sets, trimming off the goblin-like ears and replacing some of the hand weapons and appointing Blaine, bought with Mantic points, as the unit leader . 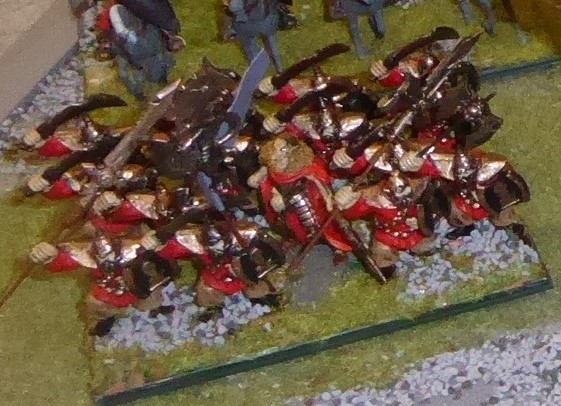 Again, Basilean Men at Arms could be a good substitute. 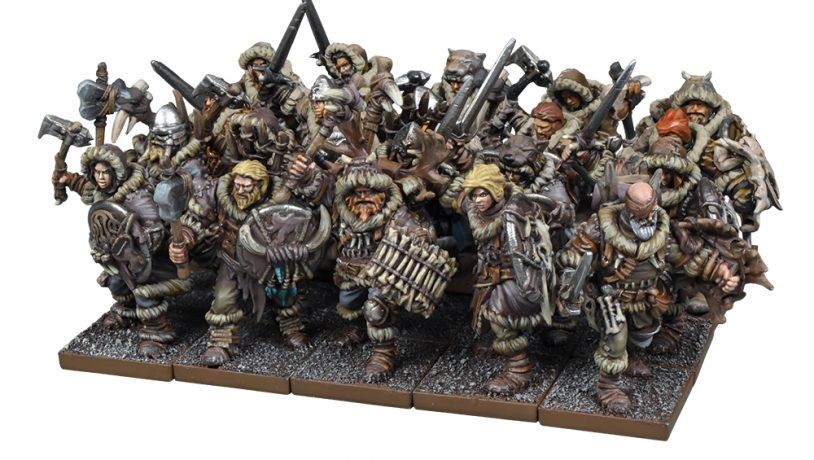 For the ‘normal’ knights, I went with knights from the Abyssal range as these perfectly captured the Abyssal tendencies of my force. 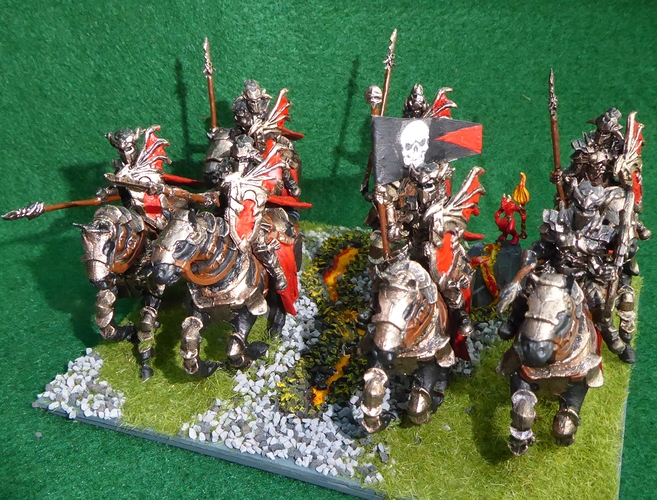 For the Honour Guard, large cavalry models are needed. I had 2 hordes of Abyssal Despoilers made from Warpath Palgue Aberrations that were made redundant at the 2nd/3rd Edition interface. Using riders from the Abyssal knights with skull heads, these were quickly made fit for purpose. 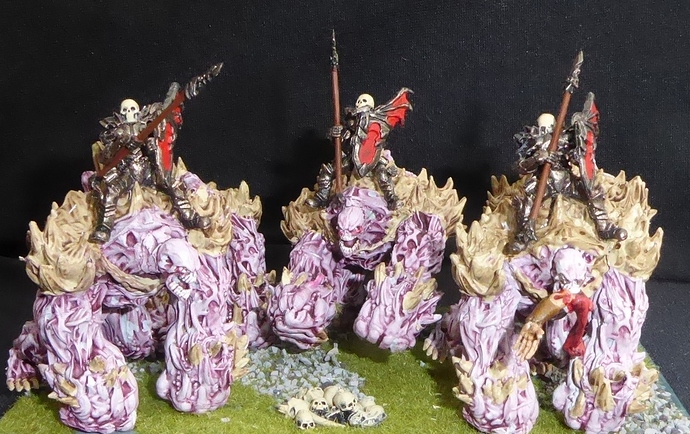 The background fluff to explain the use of Despoilers is: “One day, a patrol came across a small herd of massive creatures not seen in these parts before. From a distance these looked threatening and the patrol approached cautiously. On closer inspection however, it became apparent that the creatures were in a pitiful state, malnourished, starving and diseased. It was an easy task to round up the creatures and drive them to the nearest town. Here the local Duke and priest from the Church of the Children examined the herd and determined that the creatures were Abyssal Despoilers, a species previously thought to have been extinct since the cataclysm at the end of the 2nd Age. With appropriate care and nourishment, the Despoilers grew strong again and, in gratitude for their rescue, allowed themselves to be saddled and ridden. They were gifted to the Cult of the Dead where they now furnish the mounts for the Honour Guard. Their vicious nature and speed make them deadly foes in battle.”

A suitable alternative that is now available is the Northern Alliance Frost Fang Cavalry. 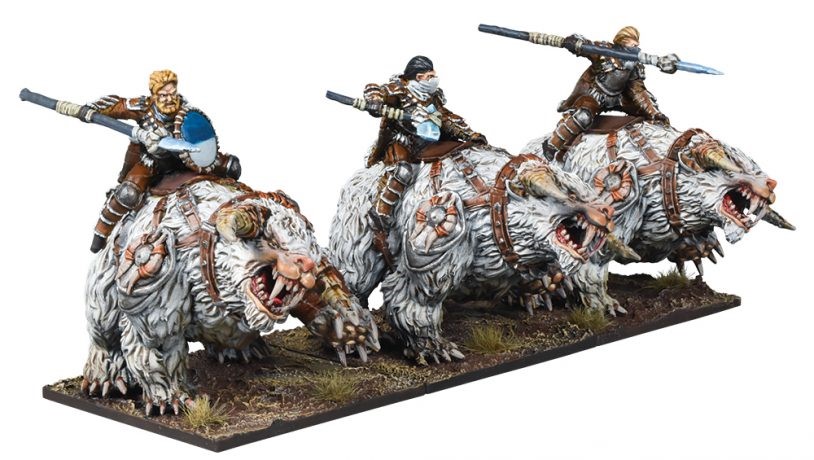 Mantic does not (currently) produce Halfling Knights but, as an off the wall suggestion for people who wish to field them, how about Goblin Sniffs with head swaps? 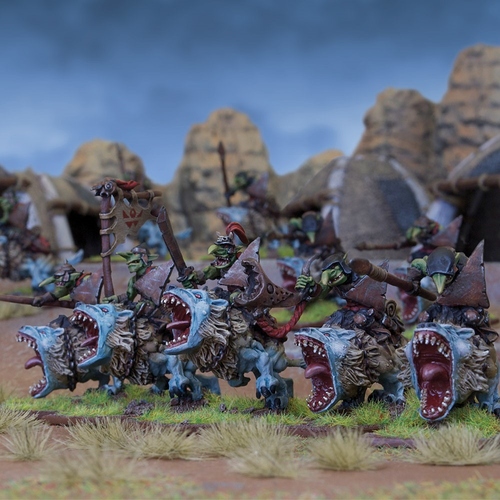 The Volley Gun is the war engine of choice for Rhordians but cannon can also be taken. The Dwarf Volley Gun is suitable for this purpose and can be purchased as an individual sprue without the Dwarf crew. The model can also be built as a cannon. Rhordian crew can be made from any of the sets selected as infantry. 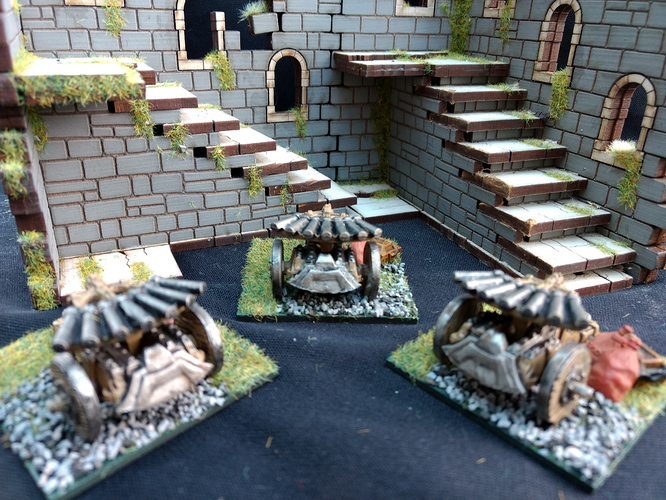 The Battle Shrine is an almost auto-include for Rhordian forces. This is a monster (chariot) and can be modelled as a team of horses towing a carriage mounting the shrine. Looking for something a bit different, I mounted mine on a Goblin Slasher. The shrine itself is an ancient sword thrust into a rock, taken from a Terrain Crate kit. 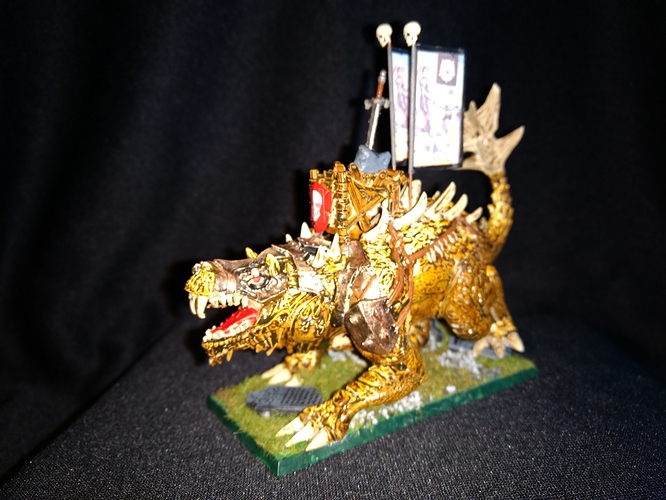 The appropriate fluff is: “The Battle Shrine gifted to the Cult of the Dead contains the sword and shield of an unknown warrior who perished with his unit in the cataclysm at the end of the Second Age and with his dying breath, drove his sword deep into the living rock. It is carried into battle on the back of a monstrous beast, tamed by the Cult. The full title of the Shrine is: ‘The Shrine of the Unknown Ancestor who Will Keep Alive the Memory of Those Lost at the End of the Second Age’. It is known colloquially as the Sword in the Stone.”

Rhordians are also able to take Mammoths as monsters. With no Mammoth model available from Mantic, the Goblin Slasher can again fill the bill.

There are many Mantic models that can be used to represent heroes. For my Pegasus-mounted Wizards, I used Basilean Gur Panther Lancers with wings taken from Gargoyles. With bare heads, skulls were again used to create army cohesiveness. 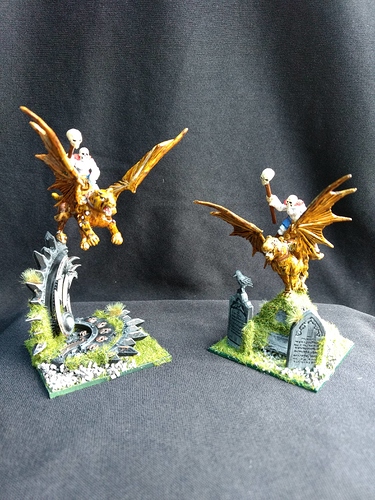 While Mantic has been concentrating on producing some excellent Titan models, there is less options for Monster sized flying characters. The only non-Mantic models in my army at the moment are Dukes on Winged Aralezs. 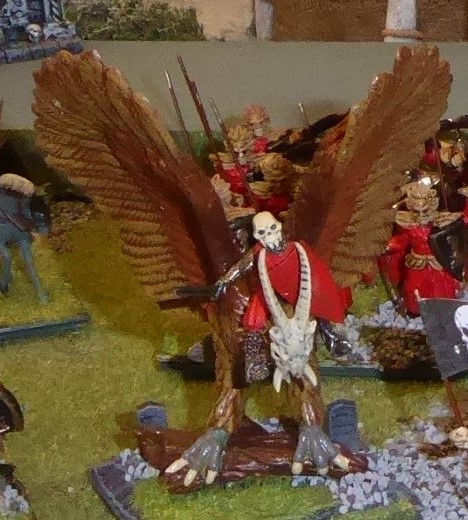 Possibly the best Mantic fit would be the Vampire on Pegasus although it would also be possible to fit wings to a number of Mantic large beasts. 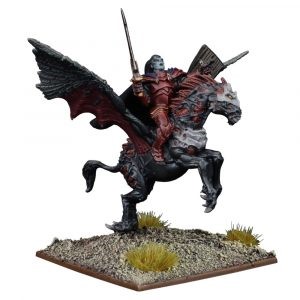 It seems unlikely that Mantic is going to produce models for Rhordia (or Kingdoms of Men). However, a few simple (?) things might make conversions easier for those keen to deploy Rhordians: 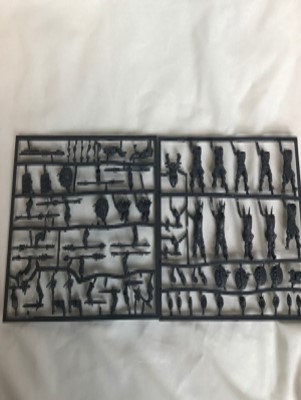 I hope that you have found this article interesting. See you on the battlefield (beneath the hooves of my Honour Guard).

Obviously Mantic will be doing the halfling side of the rhordia list, but other than using the basilean kits there is a human shortage. Personally I’m not a massive fan of their styling, but have enough historical bits to be able to simply use the bodies and kitbash the rest.

Although not used in the above, there are some some fun buts and pieces to be found in the dreadball ranges which fit nicely into a variety of KoW armies

Agreed about the Dreadball teams. I personally think they fit well into other armies and I’ve used them extensively in my Goblin army.

I applaud your imaginative use of the full Mantic range in this project. That really is a challenge, one which you seem very capable of tackling.

Will be nice to see how this project develops.