I’m looking to return to the hobby after a gap of several years (kids) and I figured one of the ways I could motivate myself and give me some structure or direction would be to share what I’ve painted previously and add to that over the coming months. Progress might be slow and stuttering but hey it’s undead so that’s hardly unusual.

Here’s the army I’ve been working on so far, please excuse the dust, they’ve been in a display cabinet for a while and even though I tried taking a duster gently to them and thought I’d done a good job, some of the pictures show me to be wrong. Any tips for getting dust off figures?

Besides the dust here’s a few tweaks I already want to make.

1/. The zombies are too uniform and clean. I didn’t want to deviate too much from the green theme but they just look bit dull. I’m planning on adding some fresh gore similar to the zombicoide models I’ve included.

2/. When I first built and painted these guys it was under the ruleset where wights didn’t have models and didn’t have flying. now my lumbering suits of malevolent armour aren’t quite right so i’m going to need to replace them with something, just not the mantic wights as i’m not a huge fan of the models.

The whole army, not grand by anmy means but there’s plans to expand. 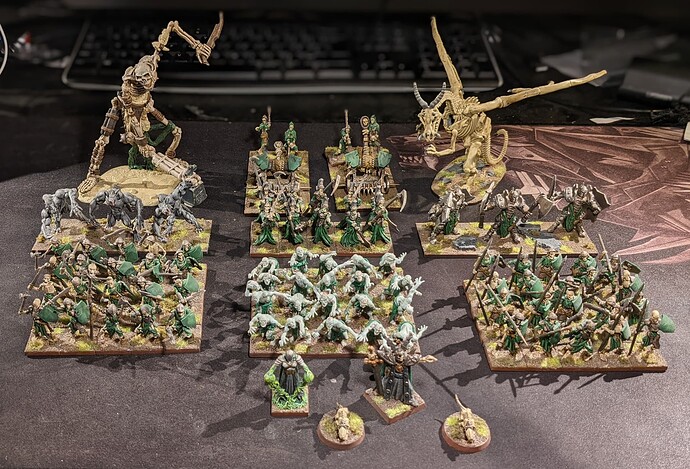 Skeleton Regiments with Spears and swords 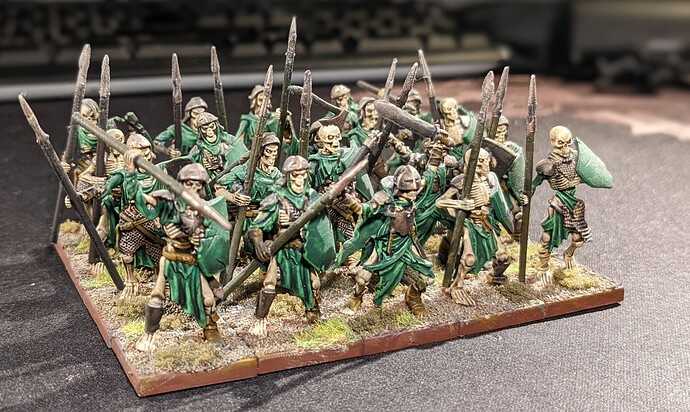 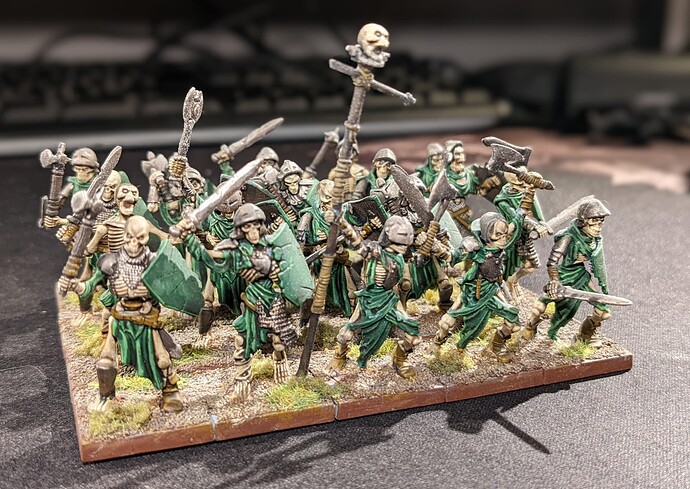 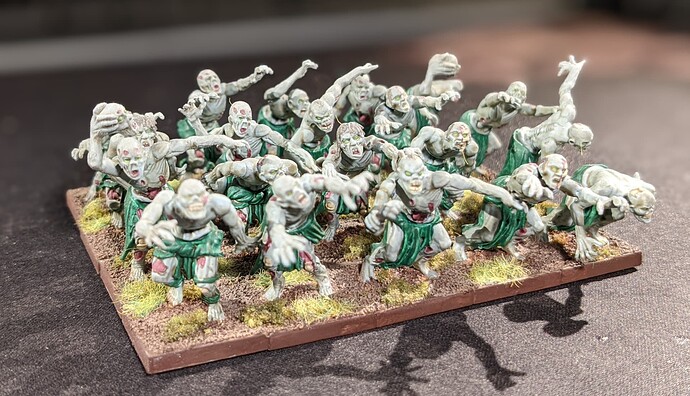 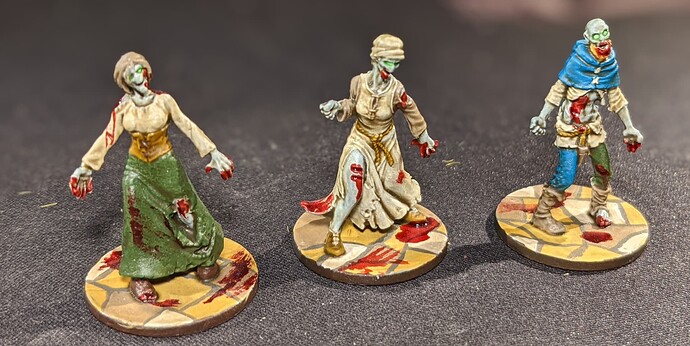 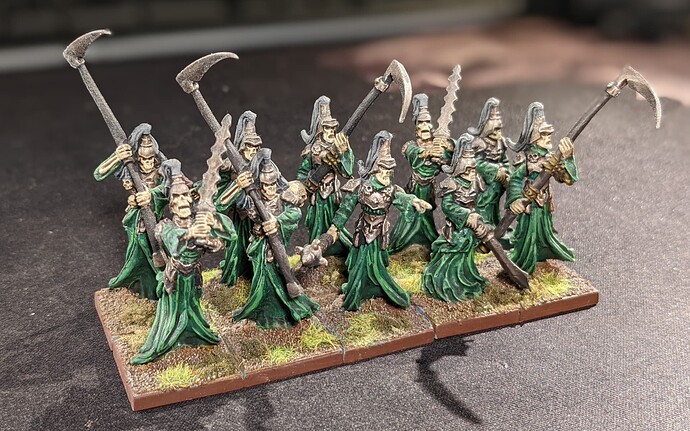 Werewolves - It seems popular to paint them flesh coloured but I thought it would look odd amongst everythign else so chose all grey. 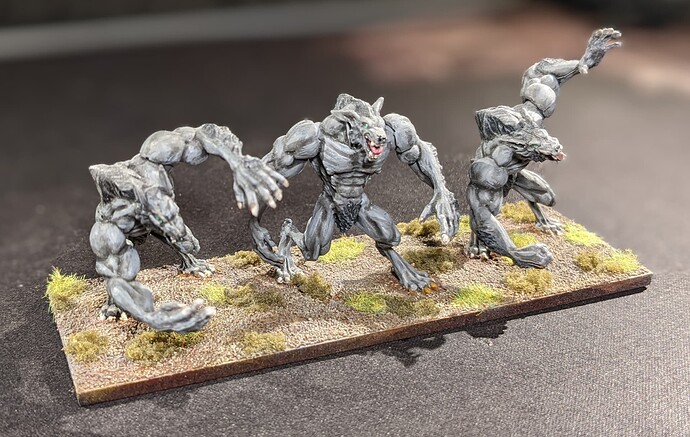 Undead Giant (Zombie troll horde?) - I just really like the idea of a skeletal giant but I thik the best way to include one might be as a troll horde proxy? It’s very unfinished and hopefully one of the next models I get stuck into properly. 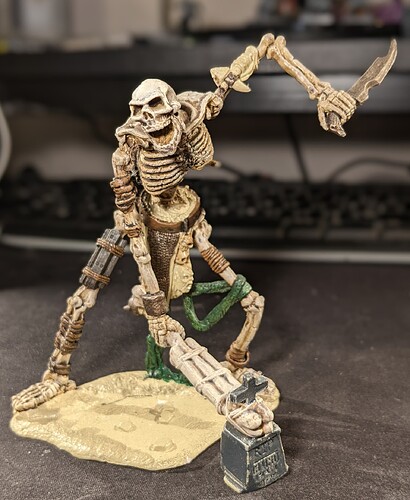 Undead Dragon - Similar to the giant I just really wanted one in the army but this time there’s actually rules, I just need to find a vampire to ride it. The model is a very old all metal grenadier death dragon and weighs a tonne, even the base is solid metal! 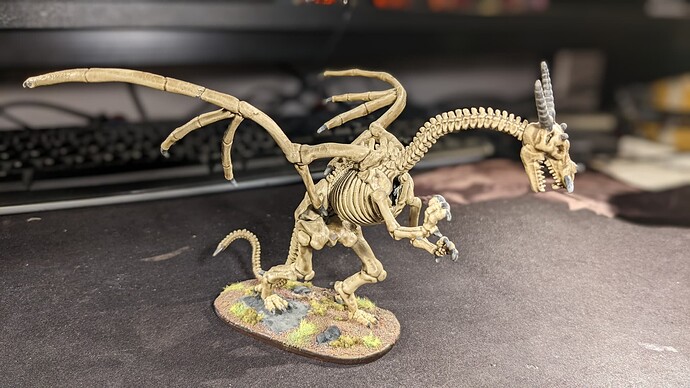 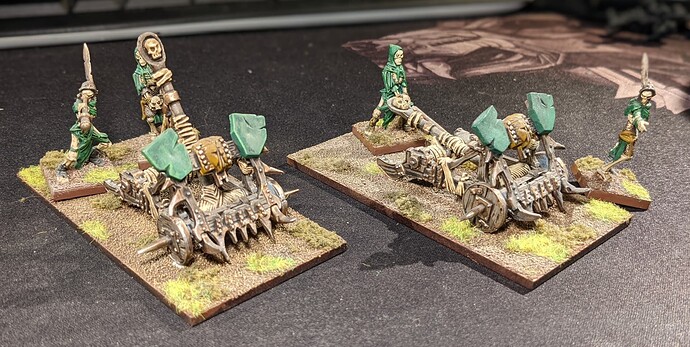 Mhorgoth and some sort of hero (tbc) 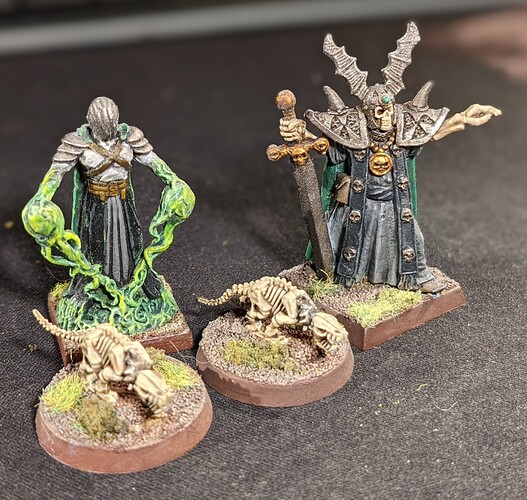 Hey mate, for your zombies i would recommend army painter soft tone (light brown), strong tone (dk brown), and dark tone (black). You could also use flesh wash for some more variety. Only use the acrylic ones not enamel coats. Just give the figures light glazes as it wont completely change the colour. Also inks could be useful…

Depending on what you fancy there are plenty of options for wraiths outside of the metal mantic ones.

Various ones from the gw nighthaunter range would work, as do some war machine ranges.

When i go back to adding stuff to my undead I’m going to use these - Old Dominion models from Para Bellum Conquest range. 12 ogre sized models for £30ish.

Great to have you onboard. I find this forum frequently helps me get projects over the line and certainly gives me lots of inspiration.

Love the skeleton dragon. I’ve had all those old Grenadier undead models on my hit list for years. Maybe one day…

lovely colors with the green. may i suggest an alternate color fro the magic on mhorgoth/others, though?

Hey all, thanks for the replies, lots of good suggestions and nice comments there. I’m definitely finding it a bit of a struggle to find regular moments for hobby time so progress is probably going to be a bit slow. I reckon I’ll be doing very well to knock out a regiment sized unit per month but maybe for this first month I’ll aim to vamp up the zombies a bit as well as whatever else i’m working on.

The zombies are actually dipped with army painters strong tone already as I was looking for a quick, replicable way of painting 40-60 of them but it’s just not come across that strongly, hopefully going over with washes will still work.

lovely colors with the green. may i suggest an alternate color fro the magic on mhorgoth/others, though?

Any suggestions for colours which might work? For the zombies I’d painted their eyes a similar green colour to Mhorgoth’s flames and tried to glaze green to add a bit of glow, the idea being to show a consistentcy for magic. What colour do you think might work instead? Red or Orange feels like I’d be skirting a little close to christmas and blue’s feel to similar?