Final month of the year is upon us so it is time for the last topic in the series. I hope that in this is going to inspire you to paint something you dreamed of and it can be a good time to make it come true

I am still gradually working my way through my second Starter Army set of Roman Imperials and some Celtic Britons from the first set, switching back and forth as i complete one unit or ( 2 sprues) as the case might be.
Currently, I’m about half way through the Imperial Roman Praetorians, which apartment from the shields, helmets and better dressed command, wasn’t that much different than the run of the mill Legionnaires. So, i added cloaks that i had lying around ( from Atlantic Dark Age Irish i think.) It certainly adds a bit of bulk and character 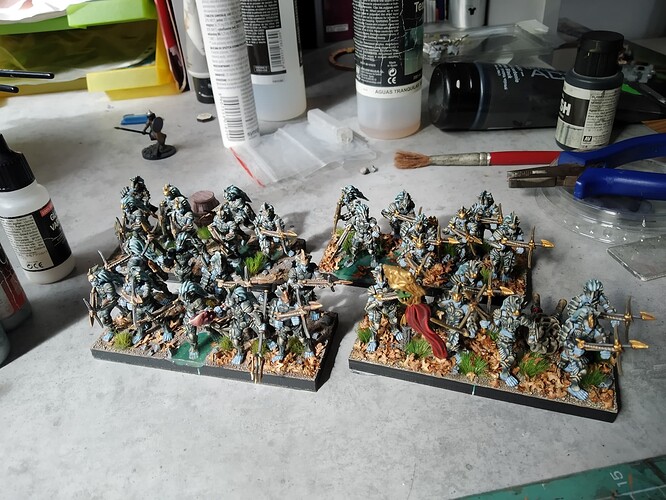 looking great @MiSiO_1 . I’m loving the command point marker. I’ve considered the same myself, and indeed i sometimes put some decoration such as a tuft of grass on the same spot.

My 'Hail Caesar ’ Imperial Roman Praetorians… I’ve done some final tweaks on the unit to promote one of the Roman Legionnaires to become the new unit commander, and made the much fancier Roman into a much more senior Legion Commander on foot, to go with the other one I have on horseback. The unit bases are mainly 8 man 20mm x 20mm which gives me greater flexibility and means that the unit can March four abreast, form a two deep battle line, change to Open Order to move through terrain, or br a 20 man Kings of War Regiment of Elite Heavy infantry for Kings of Men. 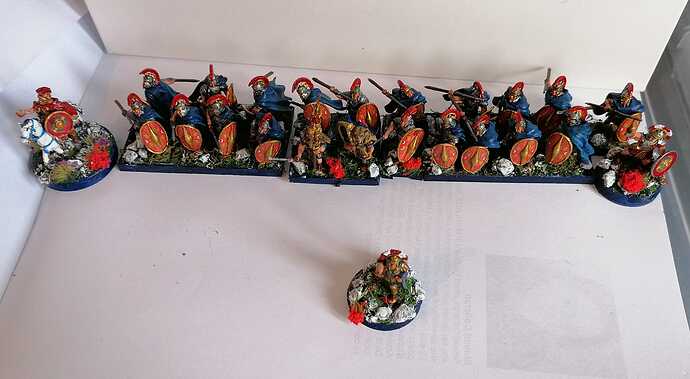 Been short on free time but getting main colors and some test bits on my Dwarf fleet worked out. 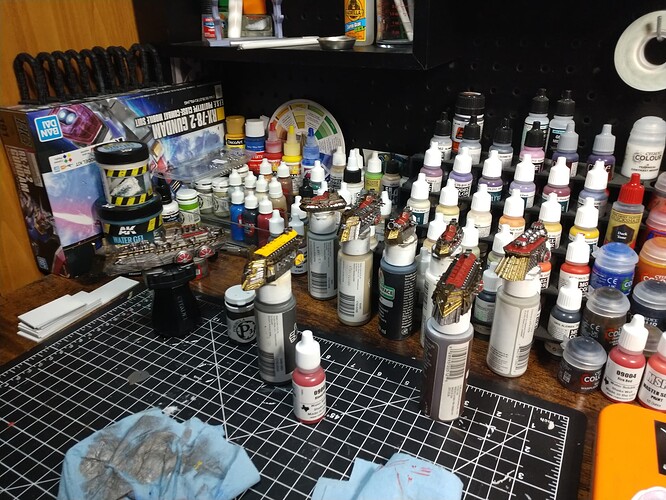 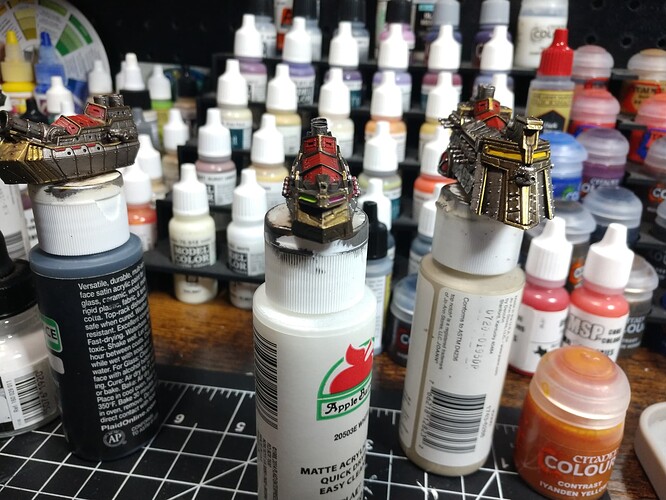 IMG_20221002_2059193161920×1440 232 KB
Really like What Scarhand did with the front of his ships so trying out a few different things to see what I like best. At the moment its a tie between green or purple. Also thinking of adding a glowing rune effect to the ships with them but not quite sure on what color yet as well. The green is really tempting to use, its probably my favorite ink that I have. It has worked really well with some portal terrain pieces I did some time ago.
7 Likes
DarkBlack October 4, 2022, 6:13pm #7

After focussing on a 15mm project and not painting much in general for a while, I have finally painted one model for KoW again. 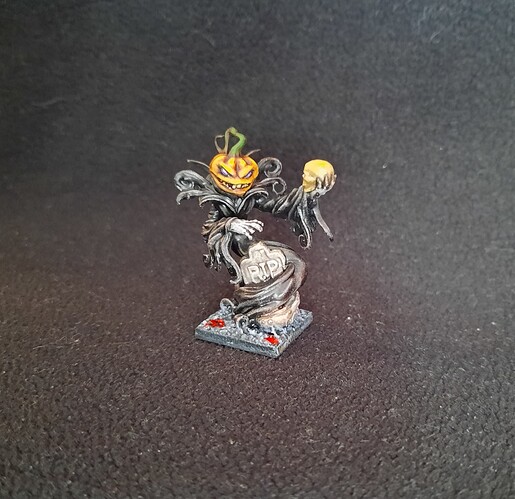 Great work on the face and eyes!

Thanks!
I wanted the pumpkin to be the focus.

very nice @DarkBlack and apt for October too

“Alas, poor Yorick. His head wasn’t nearly as neat as mine”

hehehe, You get that long awaited call up from your agent. He has found just the part for you… finally, here comes the big time. An Oscar perhsaps? !
The script arrives in the post the following day, and you eagerly search through the pages to see how many lines you have as this Yorrick guy. …Only to find out that you are playing the skull.

I took a bit of extra time to do the fine details of the centurion, given that he has been promoted now from a mere unit leader. 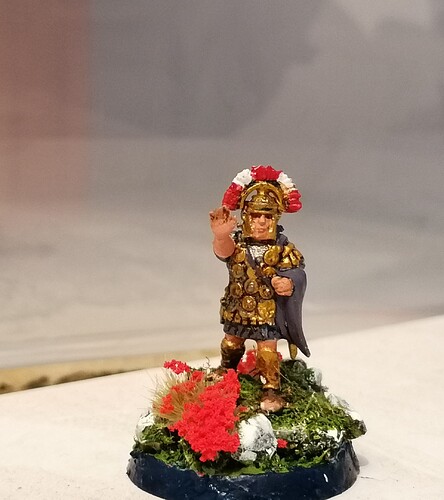 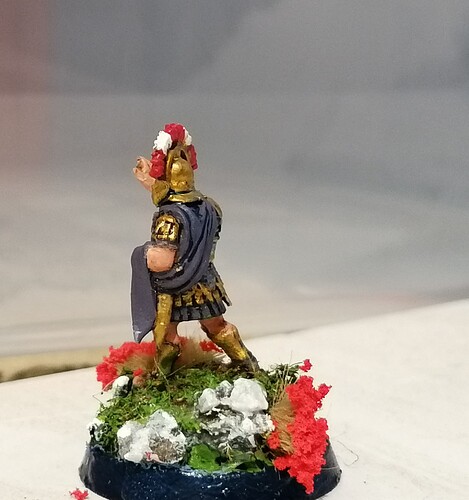 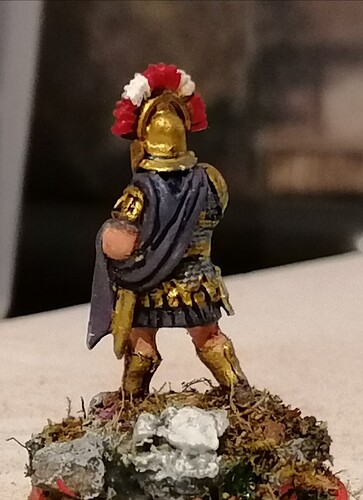 I really will have to start a Roman Army KoM post to stick these in. Maybe after i do the Veterans and the last legionaires

Wow! This may be your best single model so far! Great work!

Many thanks @KptKeno Much appreciated .
I tend to go for the 3 feet away tabletop look, especially with models within a unit.
I swing towards concepts rather than trying to win awards, so love to make Diorama bases ect… If I spend too much time correcting my mistakes, i’ll usually make more mistakes than i am correcting, but he is a sweet little model to work with.

many thanks Mikes, I’m interchanging between Romans and Celts to keep me motivated.

Good approach. I tend to paint big units in a more rough fashion .Individual models are a nice change though and you can put more affort in. You certainly did him justice.

very much so, @KptKeno and thanks again .
I have considered going back and touching up some of my first Mantic units, my Northern Alliance etc. as i’ve learned a lot in the last couple of years, after many years of only painting Orks.
I know i could do better.

Two new Mincers are joining the forces. To be honest if I need more I will only buy Harvesters and not the Mincer model. Just not as nice and removing mold lines is a pain 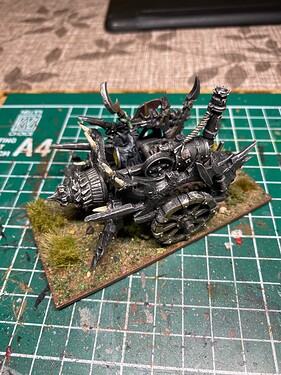 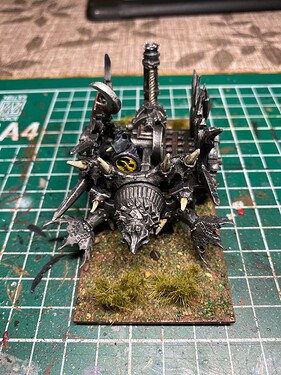 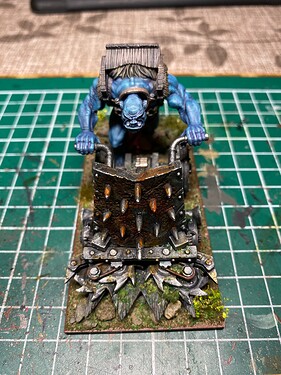 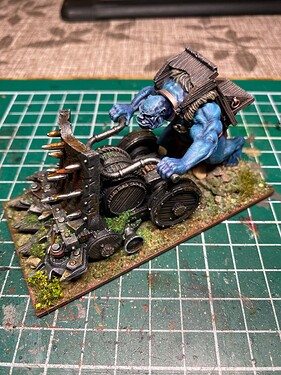 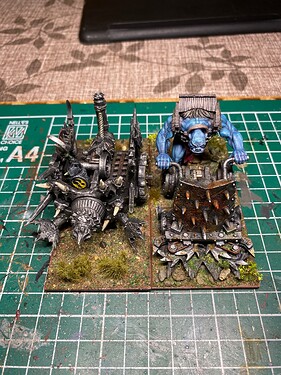