Ok, bear with me, this might be a long one, but here’s my take on Dwarfs in 3rd Edition:

I can’t see any serious drawbacks, even Throwing Mastiffs are worth taking now. Nearly all entries are much more balanced, there’s more incentive to take troops/irregular units (Rangers, Sharpshooters, Mastiff Hunting packs, etc), and the units that did take at least a minor nerf (organ guns, battle driller, Brock Riders, Earth Elementals) either needed it or got something to make up for it (cannons! bombards! stoneshaper special rule!).

I’m actually pretty excited about Ironwatch - put that in the book of ‘things I never thought I’d say’. Ironwatch Hordes help with unlocks, project more threat than organ guns, can move and shoot (poorly, but still), Unit Strength is more important in this edition, and there are a few good upgrades (specifically the Dragonshard Shield). Its not so much a ‘boost’ as it is a ‘better by comparison’ thing. I just wish there was something besides a minor point difference to help incentivize Crossbows over Rifles (range boost, Elite, no ‘pot shot’, something…).

All in all, a lot of good additions that help Dwarfs hold up in attrition fights (which they should).

Dwarfs will feel faster with the new charging mechanics that everyone has access too. What I expect here is that Dwarfs will be engaging in more fights that are diagonally away from them. Every one can, but now Dwarfs can engage more where others might have already had this distance because they are faster. Its minor and significant for slower armies. Spd 5 armes will feel like spd 6 for example when charging. This will mostly be seen in counter striking. Other armies are still faster on normal movement.

To make of for it, Dwarfs get access to Cheap Hordes of heavy armor. 190 pts for Horde with Def5 and high nerve and headstrong. So you want 2 or 3+ units of IronClad maybe some berserkers or other unis of preference for tactics. However Dwarfs also get solid artillery to make up for the strategic disadvantages in the list. For those that haven’t reviewed the dwarf list: no Flyers, Spd4 base, No healing, no Rally, limited spells are the key ones. Doesnt mean they aren’t playable.

Like most armies, the go-to stuff across the board was modified. For people who dont like their list concept changing, they will be a bit abrasive about it. But others will look forward to something new and try to open the puzzle.

Personally I think the artillery will be a big part of dwarfs motivating attackers to come to them. Basically the points Dwarfs save on units, is what extra points on weapons they can spend to motiate targets to come to them. Another other option is for Dwarfs to get the objectives, so some matches will be harder. I’m wondering how hard Dwarfs can hit back. The Brocks got side-graded. So it will take some savy players to get the most out of the hammer units.

Dwarfs also have solid access to Def6. Earth elementals are very interesting because they are hard to kill. I’ve always liked the berserker army, but I think that got minimized for some reason.

I’m tempted to a Dwarf Amy using Oathmark miniatures. So that will give me access to Ironclad, Ironguard, Shieldbreakers, Bulwarkers, and Rangers. Not sure how competitive it will be, but it will be most focused on melee with the limited shooting coming from the Rangers.

I don’t have the rule book yet, do Rangers still have light crossbows, which essentially count as bows?

Yes, only change the rangers have is they are irregular now.

Brocks were cut down. So were Organ guns. I dont see anything to get excited about for Dwarfs in 3rd. Its not like the army got better. It will still struggle in any scenario that requires movement . You better keep your flanks secure or your army will be outmaneuvered. There is one fast unit.
Just my opinion. You may love it. I prefer to play an offensive aggressive army. I dont see Dwarfs doing that well.

I think the bonus to cannons and bombards (+1 att, ignores cover, Bombards have a ‘pot shot’ option to move and shoot 1 shot at 6+) will be a bigger change to dwarf lists than people think. Being able to focus fire on faster flanking units has always been an issue, since all everyone took was organ guns and flame belchers (for good reason, lets be honest). Having 48"-60" range guns that ignore cover is fantastic incentive for a lot of faster, outflank-y enemies to close into melee rather quickly, and the Dwarf attrition game is stronger now with the bonus to Phalanx.

Shieldbreakers being at Me 3+ is very nice to have, and the general points reductions to most infantry (bulwarkers, berserkers, ironguard, and shieldbreakers) is just plain icing on the cake.

I’m still taking brocks and earth elementals (1 regiment / horde of each, a greater elemental, a stone priest, and a brock-riding berserker lord with mournful blade), since it adds really nice versatility to the list.

I agree. There are a few standout units that have impressed me in V3 so far.
Dwarf on Large Beast
Dude is a mobile D6 tank. Doesn’t hit very hard esp in terrain but does a nice job of holding up stuff. And he sees over hills too.
Steel Juggernaut
Inspires and is speed 5 nimble and can do some plink shooting from turn 1. Hard to take off with chaff and can do damage to flanks.
Infantry Regiments
Shieldbreaker regiments are standout for me - US 3 and can pack a punch at just 125 pts. Will try bulwarkers next.

Disappointed that bulwarkers lost big shields but iron Guard regiments means I can have a ton of D6 on the board.

You know bloodaxe, after about a dozen games so far, Ive ran into that Headstrong mechanic a few times.

Considering something got wavered that doesnt have headstrong, a character breaking his own waver, and moving and breaking wavers on other units with the aura is interesting. Now thats not the case with Dwarfs, they basically all have headstrong, but the Rangers and Mastif unit. I can see on turn 5 or 6 that reroll headstrong Aura could be clutch in a close game. It’s almost like Dwarfs are -/N army.

Well its good its working out . Depends on your list I guess.

So anyone get a few games in with Dwarfs in 3rd and have some advice or a list that works well for them?

I played 4 games in v3. DEF6 is, as expected, better because of overall less CS and TC. Ironguard regiments go along with my 2 Steel Behemoths which form a DEF6 wall. Shieldbreaker hordes are great hammers. Throwing mastiffs have been worth their points and I take the on 4 units to shoot off chaff or soften up the enemy. Always hitting on 4s means ignores cover, no move-and-shoot penalty and can hit individuals or stealthy units. Brocks nerve has been reduced so I take Mastiff packs as chaff in front of them which I have found to be more useful than I expected. Being able to measure charge distance from any point on the unit is, again as advertised, great for slower infantry hordes. Bulwarkers losing Big Shield hurts, but I added Hammer of Measured Force which makes them effective in a grind vs pretty much anything. Golloch’s Gun is basically an organ gun that hits on 4s with along with the other upgrades (iron resolve, very inspiring) is worth the points on Steel Behemoth. Archers have been nerfed in the overall game, but Dwarven shooting is stronger than ever.

I ran this list in Oslo GT Conquest, 4/5 wins

Oooh, thread necro! I support this.

I’ve gotten a dozen or more games in with my list variants, and they seem to work really well. This is just an evolution of the lists I was taking in 2nd, but I’ve found they are a lot more competitive/balanced in the new edition.

My basic 2k list is generally something along this line:

There’s not nearly as much shooting as last edition (generally had 2 Organ Guns and a ranger regiment in there), but what is there is pretty accurate. The Flame Belcher is the newest edition (used to still try to fit 2 organ guns in there, but they have very rarely been worth it at this points level this edition), and I’m toying with the idea of using a Steel Juggernaut over a Lord on Large Beast, which would let me drop the Boots of Striding and add a Mastiff Hunting Pack.

The best part of the list is (oddly) the Greater Earth Elementals, who are just big enough to block charges, small and maneuverable enough to get good flanks thanks to surge, and (for 10 pts more) better at just about everything than the Earth Elemental unit. If I didn’t need the unlock (and pathfinder), I’d probably trade out the EE unit for another Ironguard regiment. 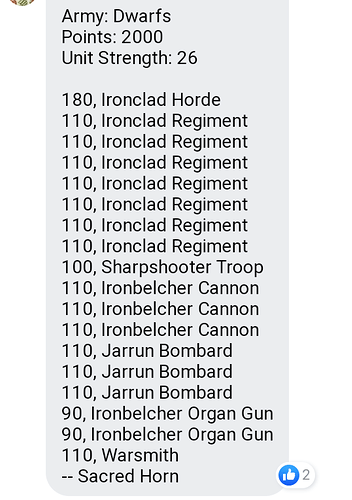 I think it would be even nastier if the sharp troops were to be changed into throwing mastiffs. 6 of them and 10p to spare. Hopefully I’ll never face such list

I’d agree with the above about mastiffs!

Nightstalkers lists could bugger it up - fiend heavy for fast stealthy stuff, mind screech and otherd for lb span to pick on the war machines (even atvde5)

Hope you don’t get invade