Copied from the spoilers thread:

Empire of Dust player here - I am just rejoicing to see the EoD now gets an amazing cheap surge hero in the revenant champion with surge (5) at 75 pts. Adding in respectable Def 5+ and -/14 AND Inspiring makes him great and fills a much needed gap in the army in my opinion.

Also the other updates make me happy - Rhas recalls the Settra vibe while providing interesting gameplay opportunities in combocharging with a Me 5+ / high attacks unit. That our Chariots got changed is nice as well and the now non-mandatory shooting is a welcome option.

Unfortunately, the bone giant didn’t get Slayer/Rampage as its living counterparts did, however the improvment of the behemoth will hopefully make him a viable option too now.
I would have welcomed the return of the undead scorpion to have a medium sized monster (and I got a gorgeous model for it) but I suppose the Wyrm riders tickle the fancy of the majority just fine (and maybe mine too, lets see)

How do the fellow EoD players see the changes?

I love the Behemoth now. Running two in an infantry list and trying out triple drain life with Snare, lol. Just make sure that wide flank is protected.

The rev hero is definitely a big plus. It’s good to see that our army can now run such a cheap and efficient support piece like so many others have been able to.

Rhas is nice but he is pricy and the units that would really benefit (chariots, wurm riders, great weapon skeletons) have a very wide frontage so it 's tough trying to get a double charge off once your opponent knows what Rhas can do.

I miss using scorpions as well. Some use them as catapults.

Yet to try the new profiles on the table, but I’m excited to see what the dusties can do. I like the idea of the Wyrm riders with a decent attachment, like sharpness or strength. They’re basically another EG horde at that point but faster and with no movement penalties. Their skeleton key word then stacks well with the CHP and/or Rahs. Actually, the Nimble item on them could be realllly spicey.
The most impactful change is the rev chamption definitely. Plan on taking two mounted with the surge upgrade. Cheap all purpose unit - brilliant!
I like the idea of Chariots - plink shooting with Shattering to support EG archers and soul snare, and then brutal in melee at a decent cost. I’m just not sure how they fit in my list building yet.
At first glance, the Reanimated Behemoth looks really good. I’m not sure if he’ll beat the Giants to the list or not yet as both have their pros and cons, but the option is nice!
Overall, some really nice changes for EOD.

Back in 2nd the Behemoth was getting some play with a “monster mash” kind of style. Lots of skeletons and then these colossal monsters pushing forward disturbing the charges. With Phalanx on spearmen regiments and a second line of Snakeriders, looks like an older play style comes back around again. Now we have the cheaper Surge which was deeply needed to add variety to the lists.

“impact hits” was the mentality behind the chariots getting brutal. Chariots got passively improved by not getting targeted by Rampage and Slayer. Im still not convinced Chariots are “up to par” however I understand the design team doesn’t want to make infantry obsoleted. Okay, across the board the chariot force got much cheaper. Lets look.

Here are some hobby pictures for a break from reading. 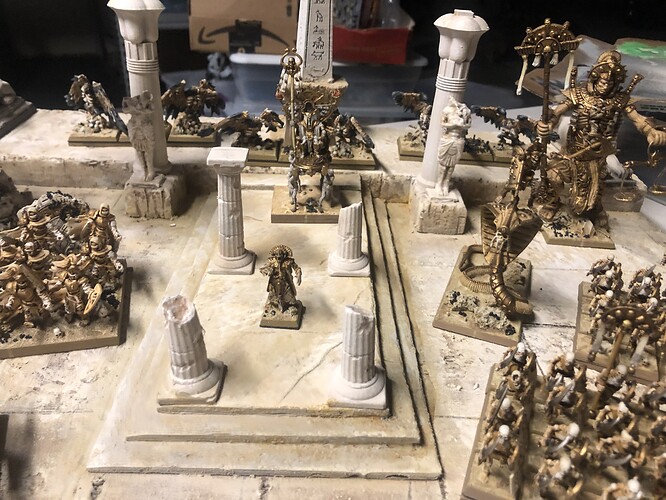 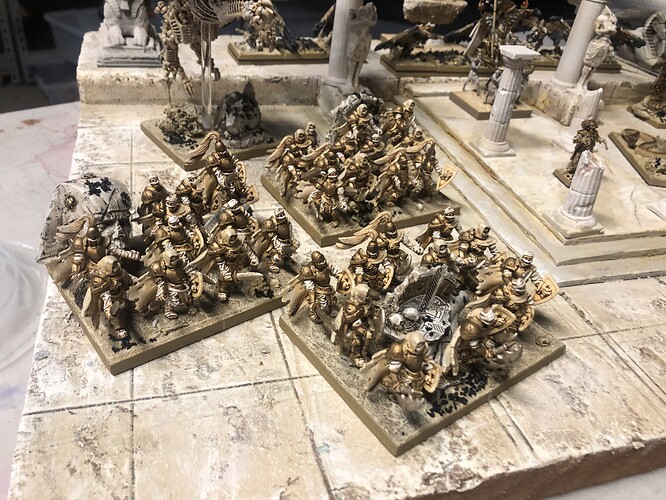 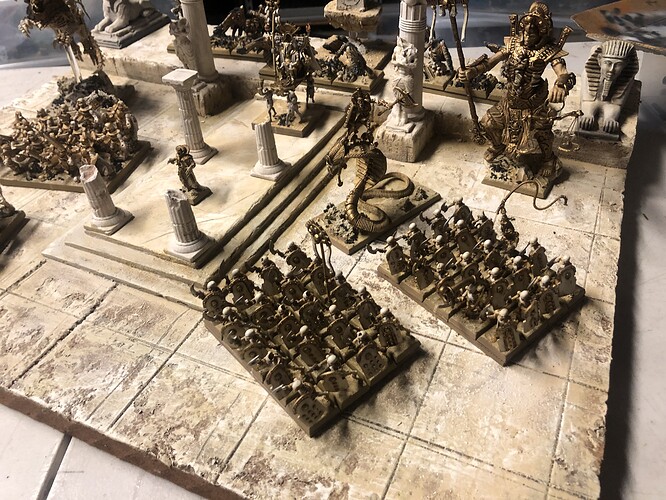 Gorgeous army, thanks for sharing with us!
The colors really evoke a dried out, mummified feel for me. Nice touch with the whip in the back of the skellies as well.

I shared the following idea in the Chariot discussion as well; if you use surge to get into combat, the Chariots can potentially apply their brutal AND shattering simultaneously, maybe thats also a neat trick.

For the Pharao’s Elite upgrade, I am not sure if they just didn’t bother to write the rest of the upgrade text and its still exclusive? The COK22 text is leaving out the points cost as well, so thats where my suspicion is coming from. In my book, they just wanted to correct the keyword “Mummy” (Thanks to the RC, thats something that bewildered me when I first looked through the v3 rules

I think Shattering only comes into play for nerve tests in the range phase. So if you surge into a unit that you’ve just shot at, you won’t benefit from the shattering rule as there won’t be a check until the end of the combat. So no stacking by the looks of it

I had my first game with the COK updates yesterday. My main take away is as the original post said - Rev champs with surge (5) is so refreshing! I took two mounted champs with surge and the Monolith, which gave me pretty much guaranteed surge (13) across the board with the manoeuvrability of the champs. And when they’re not surging, they’re still inspiring or threatening flyers / shooting units etc.

The changes to the Reanimated Behemoth were brilliant fun too. I’m not sure it will completely replace my 2nd Bone Giant, but hitting on 3s is very nice. The lower nerve just makes me nervous!

RAHS was fun but gave me a headache trying to keep my possible mulitcharges open. He did get a few double charges with the Wyrm Riders, but i was against Seige Breakers, so even hitting on 3s didn’t do too well. I’ll give RAHS another go as the threat of his ability is it’s main use I think.

Same goes for the wyrm riders, i think their threat range and manoeuvrability is their greatest strength. Thinking of taking them with brew of haste or nimble next time if i have the points.

I also used chariots for the first time. I took 2 regiments as thicccccc chaff. I wasn’t expecting a lot from them damage output-wise so i wasn’t disappointed, but really liked the threat and the plinky plink damage to make your opponent think.

I find however that my soul snare just gets hounded from turn one with either hex or LB. Might have to practice keeping it hidden until absolutely necessary.

Argh, of course you are correct I missed the point about shattering only applying to nerve tests in the shooting phase^^ Thank you for pointing it out!

All in all I think the changes did a lot to make the list more flexible and enable more playstyles, so hurray

Looking forward to future games and the reports from all of you!