Explode a con was a three day event that hosted tournaments for five Mantic games systems, held at Entoyment between 18th and 20th March 2022. The Moonrakers were represented by Jon and Andy in the Vanguard tournament and by Jon, Paul and Andy in the Kings of War tournament.

The Vanguard tournament involved 4 games, 2 at 150 points and 2 at 200 points. I fronted up with an Abyssal warband with: 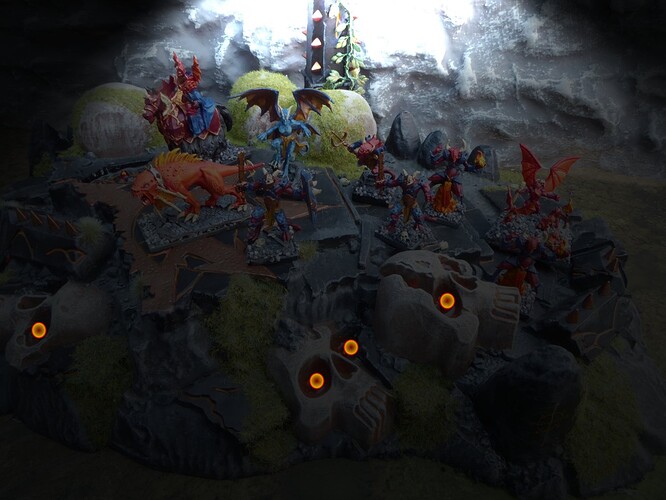 For the 200 point warband, I added a Seductress.

Andy ran a Rhordian warband, all modelled as Halflings. 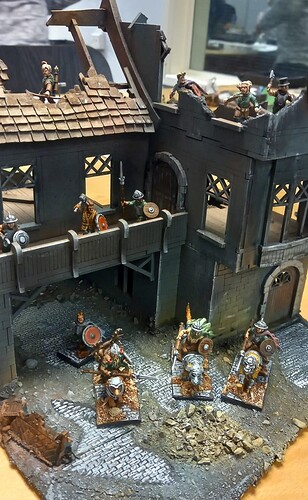 For Game 1, with sickening inevitably, I was drawn against Andy in Supply Grab. It was a tight game, but I eventually ran out the winner. 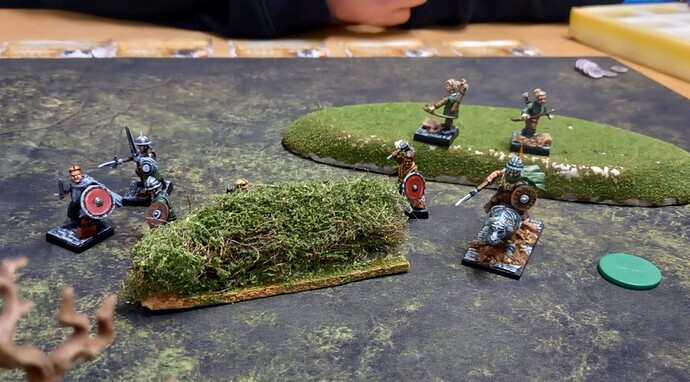 My reward for winning was to face Alex in Game 2 in Destroy the Baggage Train (using tents to represent the baggage train. Alex also ran an Abyssal list but included a Warlock for some magical goodness. Alex was the defender and I took a gamble to try and win in Round 1 by destroying 2 wagons and scoring the minimum 12 VPs required for victory before Alex could inflict serious damage on my warband. 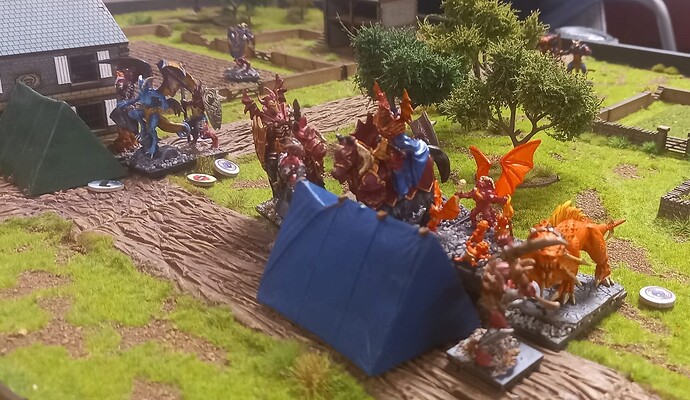 This nearly worked as I destroyed one wagon for 8 VPs but could not inflict sufficient damage on the second wagon for victory. This allowed Alex to start wounding my warband that was now badly positioned facing the wagons. The game developed with Alex desperately trying to kill my Abyssals while I split my attacks to whittle down his warband while still attacking the annoyingly resilient wagons. Eventually, I managed to break Alex’s warband and 2 of his remaining warriors fled from the table leaving me to score the VPs needed for a hard-earned victory.

On to lunch and a chance to relax from the stress of combat. 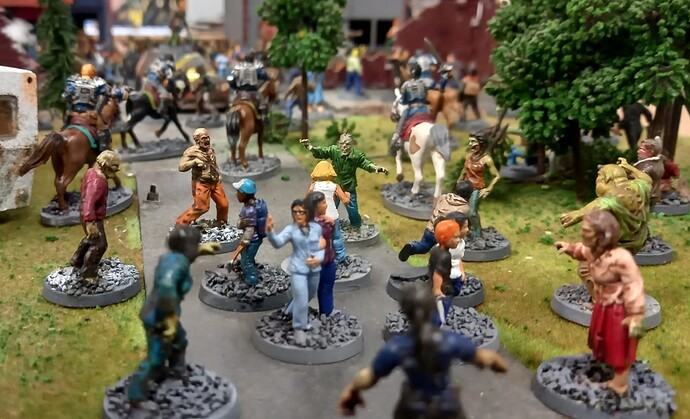 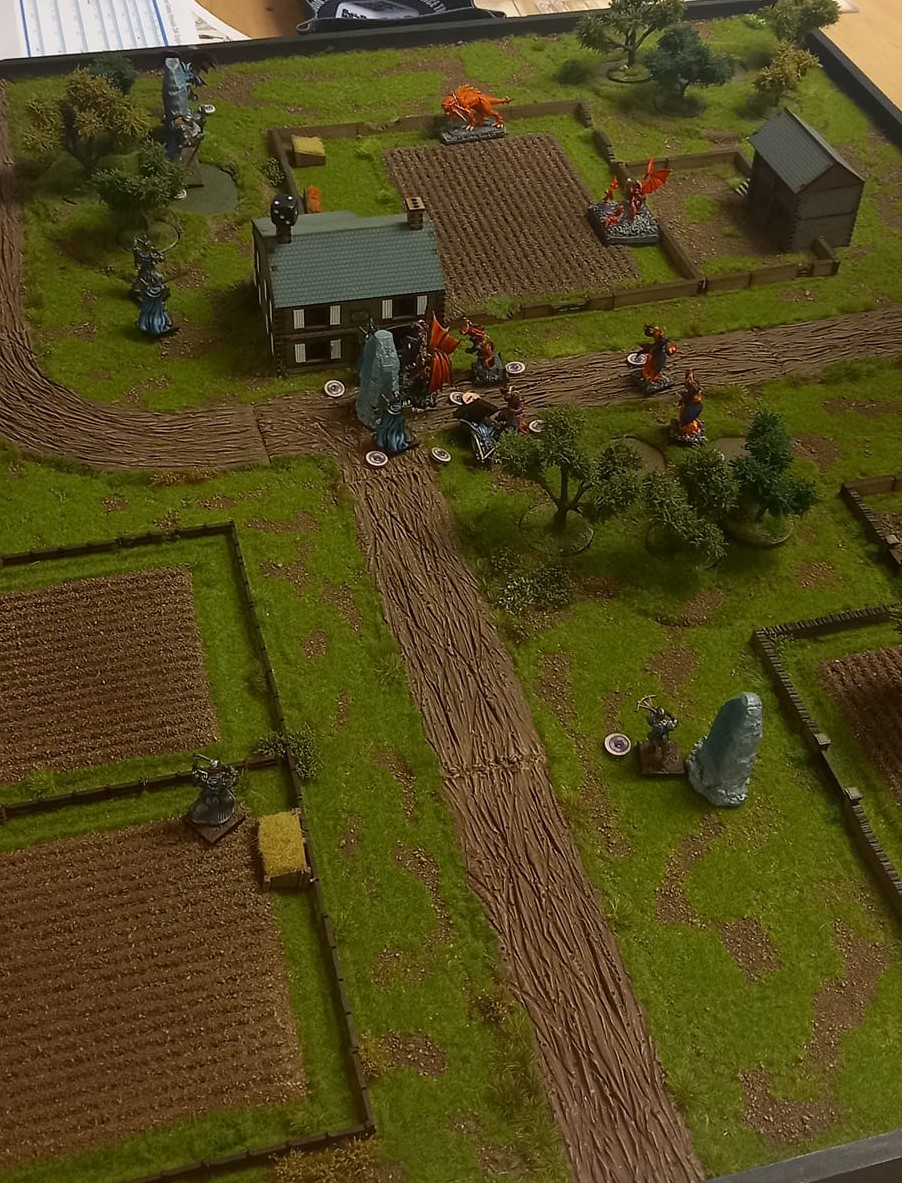 However, the plan came back to haunt me in turn 2 when Danny secured the left hand stone and killed my model on the right hand stone to also secure that. In the centre, his Dictator killed my Hellequin and things were not looking good. I was forced to send a detachment to the left hand stone to contest that and to redouble my efforts in the centre as this was where the battel would be resolved. With the very last dice roll of the game, I managed to kill the last of Danny’s Basileans in the centre to secure that stone and score 2 VPs to win yet another tight game.

And so on to the final game where I had to face Moonraker Andy again in Secure the Portal. It was unfortunate that the terrain clearly favoured one side in this scenario and I won the roll off to select sides. This immediately put Andy on the back foot and in turn 1, I managed to get several models into contact with the Portal to start racking up the VPs. Although Andy managed to start killing my models, including shooting down my Gargoyle that I had foolishly flown into the open in front of 2 of his archers, the terrain continued to hamper his efforts. 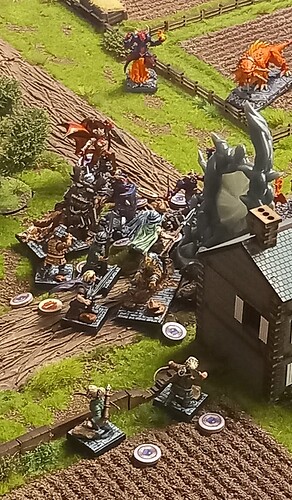 To add insult to injury, 2 of his models adjacent to the Portal were sucked into the Abyss (or at least returned to their deployment area) while I only suffered once from this mishap. While Andy managed to start scoring VPs, he was not able to close the gap on the total that I had scored and I ran out the winner. 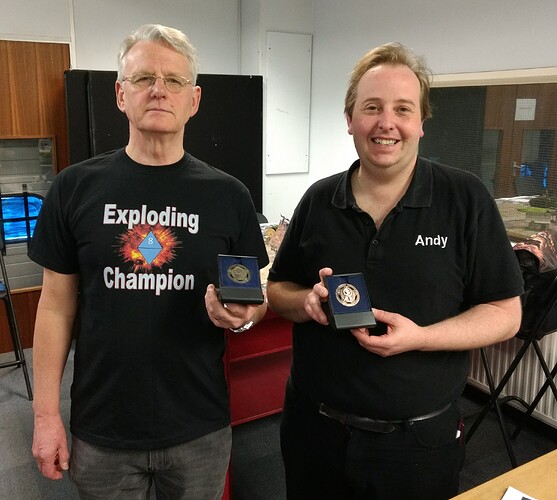 This was a really well run tournament in a relaxed environment and there was some great prize support. As well as a trophy for winning, I received a large box of Battle Systems terrain and a model of the Portal for use in future Vanguard games. RESULT!!!

Armada was not run as a tournament at the event and so I took the opportunity to demonstrate the game between tournaments. 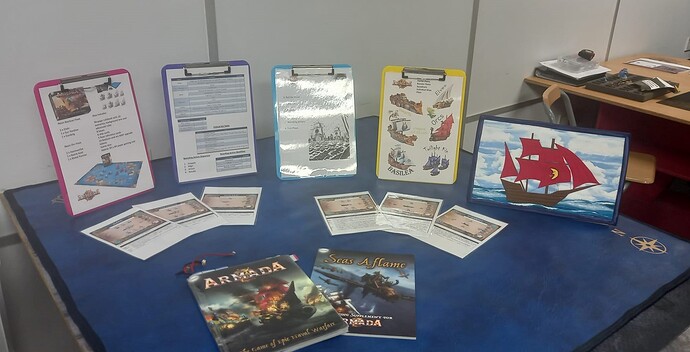 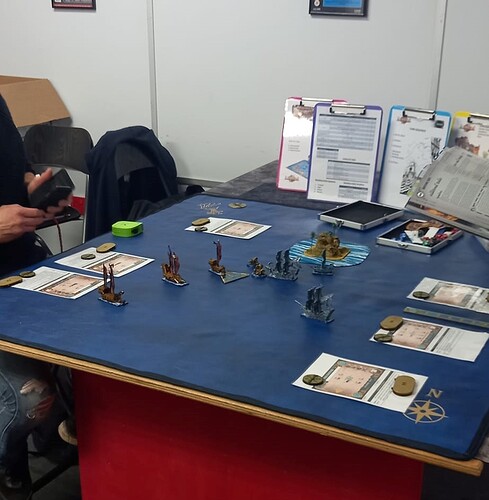 The Kings of War tournament was run at 1995 points and I ran an Undead army with:

For my first game, I was paired against Seb in an Invade scenario. Seb was running with a Rhordian list including 2 Volley Guns, War Shrine and 2 hordes of Honour Guard.

I didn’t fancy facing that shooting barrage and I deployed heavily on my left, taking advantage of what little cover there was from a hill.

Seb matched this by deploying mostly on his right. 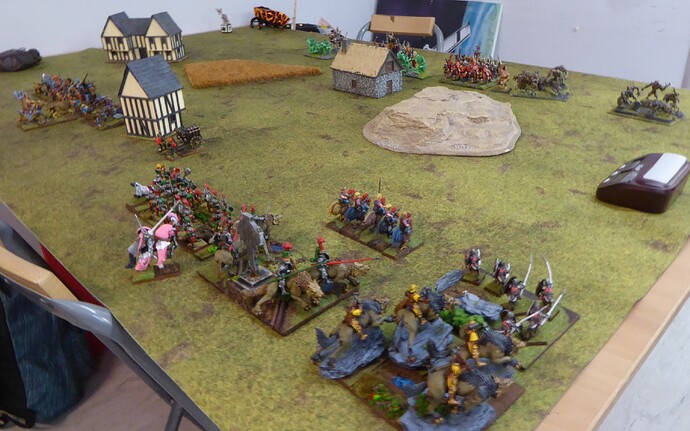 I advanced on the right, shielding my most vulnerable Soul Reavers with expendable (and already dead) Revenant Knights. On the left, I was more cagey, trying to get into a position where I could use the speed advantage of my Werewolves to avoid Seb’s chaff and get the first strike onto the Honour Guard. This paid off, and I managed to get several charges off, including a horde of Werewolves into a horde of Honour Guard and surprisingly managing to waver it. This opened the way for me to clear this flank and start moving towards the centre where my Soul Reavers had destroyed a horde of Pikes before being shot off the board. I eventually cleared up and came away with the win.

On to game 2, where I was paired against current UK Number 1, Danny. Danny was running a Forces of Nature army with, amongst other things, a Greater Air Elemental, 2 hordes of Water Elementals a Hydra and hordes of Salamanders and Naiads. We were playing push. 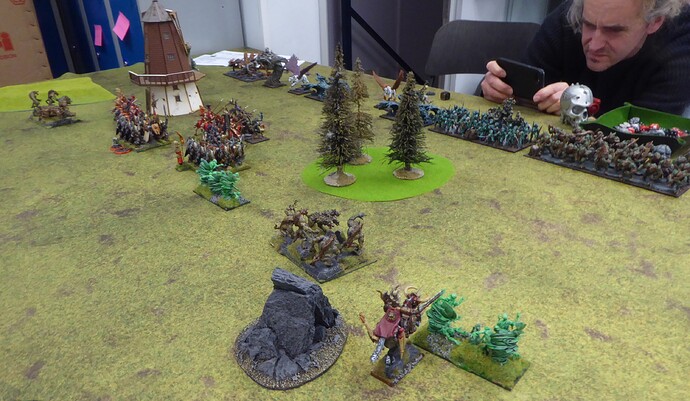 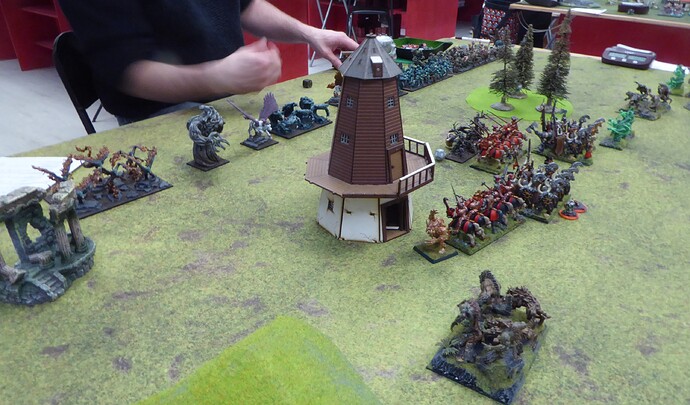 This plan half worked – the bit about ignoring the Hydra. In the centre, things did not go so well and I became bogged down which gave Danny the chance to get his Air Elemental behind my lines and position it 1” away from a Soul Reaver horde for a tasty surge. But then Danny’s failure to carry out the correct sacrificial rites to appease the dice gods on the eve of battle came home to roost. With 4 dice to roll one 4+ for the surge, he failed. The Conjurer’s Staff re-roll also failed and I took advantage of the stranded titan to flank charge and destroy it. That was effectively game over and I was able to push on with my plan of ignoring Danny’s Hydra to claim the win.

The final game was to be against Mike and his Rats in Salt the Earth. I’m afraid I did not take any pictures of the game but here is one of part of his army.

The game started OK and then went downhill. It is depressing when in turn 2 of a game you realise how you could have deployed so much better. Mike played very well and removed my army over 3 turns for a big win – to him.

I finished up with 2 wins and in 10th place.

Paul had a good tournament with 3 wins and came second. 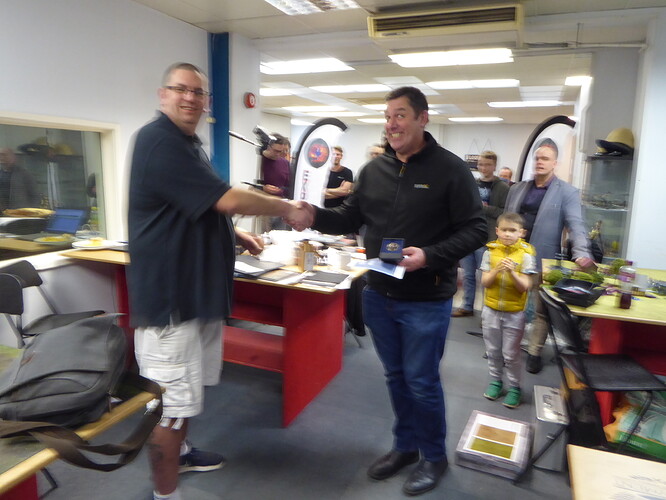 Andy’s Basileans had a couple of bad match ups and after winning his first game lost the last 2 for a 14th place finish.

A great weekend of gaming.

Many thanks to Tony who put a huge amount of effort into organising this event and in gathering the largest selection of prize support since Montezuma tried to pay off Cortes. 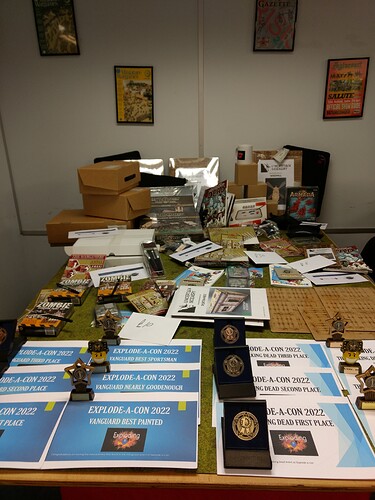 Thanks also to Matt who helped to run the KoW tournament.

And thanks to everyone I played against.

Great report and particularly nice to see some vanguard action! Shame there were two events in one weekend for Vanguard (with another at Mantic HQ) and even more of a shame I couldn’t go to either because it’s the weekend of my sons birthday!)

Looks like a great event - the scenery in particular is beautiful. Good job winning the Vanguard tournament and beating a UK number one in KoW!