with the significant boost CoK22 has supposed to Elemental armies I thought it worths to handle them in a new topic since the old one seems obsolete (otherwise I’d delete this new topic and continue with the previous thread for elementals).

Yesterday I played a slighted fixed list pre-cok (I just removed the standard druid and replaced with another overpowered gladewalker): 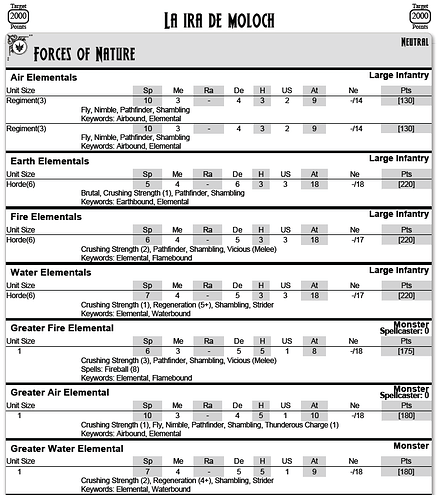 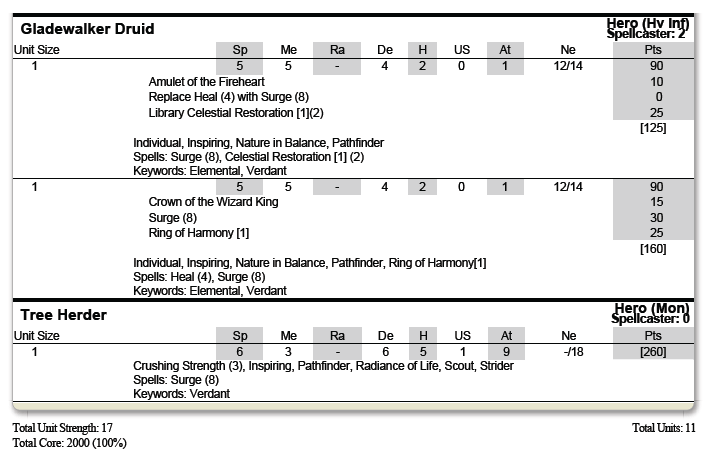 And these are my thoughts about the overall army:

Elemental Air
They are still too weak so I will continue use them as chaff. Pretty expensive but fearless / morale 14 makes them perfect to stand against other chaff and they superior threat range makes almos sure they will charge.

Greater Elemental Air
Now I think he’s amazing. Probably the best Greater elemental if backed with a Surge to find a flank /rear. And now a single druid can surge up to 2 units I’m considering adding a second one to the list.

Elemental Stone
They’re too slow for me. I think its Def 6 doesn’t worth the Spd 5’, and surging exposes them to unwilling flanks. I’m thinking in replacing them with another horde of Water Elementals and their Spd 7’.

Greater Elemental Stone
I love the mini I did for him but I haven’t played him yet. if he wasn’t a titan … Have you played him? Any feedback?

Elemental Water
I think they are the perfect anvil for my army. They move fast and having strider is a nice upgrade. They aren’t as though as stone ones but they compensate with Regeneration. I do really like them.

Elemental Fire
They are nice. The perfect hammer with his CS2 + vicious.

Greater Elemental Fire
I really like this elemental, but now I’m thinking in replacing hime with a second air one. I will just keep testing some games more.

Druid
I only played him for his bane chant but now I think is widely outshined with the gladewalker one. Not considering playing him anymore.

Gladewalker Druid
I think it’s always worth running 2 of them.

Forest Shamblers
I don’t see the poinf of playing them in such a small army. If they go their own with scout they will be easily surrounded before the rest of the army arrives. Maybe you can play them in a full Air + Tree lists? I still have to mount and paint mines hehe

Tree Herder
This is a wonderful mini that heals near units. In an army that’s widely outnumbered I think is vital restoring your units. In any case I always play him because is a monster in a slot of a hero.

My major struggle with this army are the unlocks, so I always go with 3 hordes to have 3 heroes plus 3 monsters. I thought about 4 hordes but then I don’t have enough points to buy the extra monster. And only 2 hordes leaves me without a vital slot of heroe. Have you ever try another aproach of army building? (Sticking only with elementals).

Finally some pictures of my army: 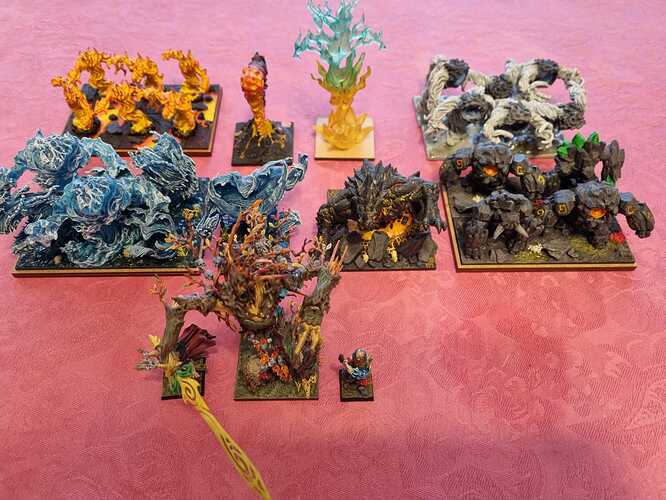 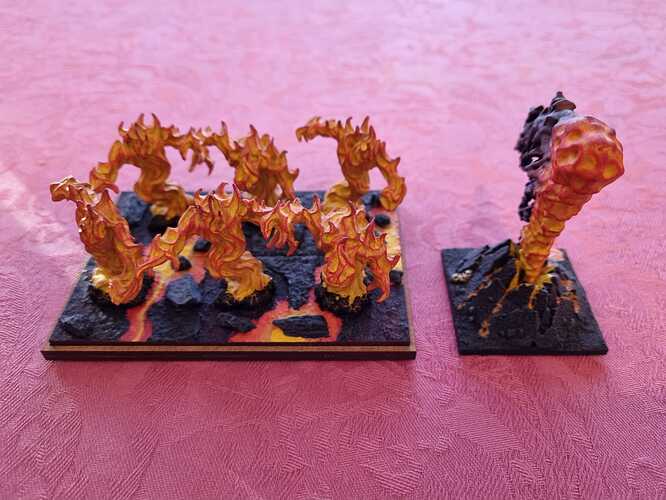 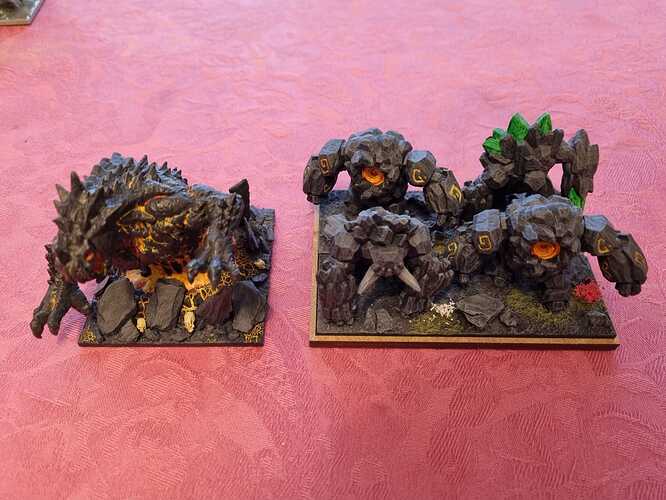 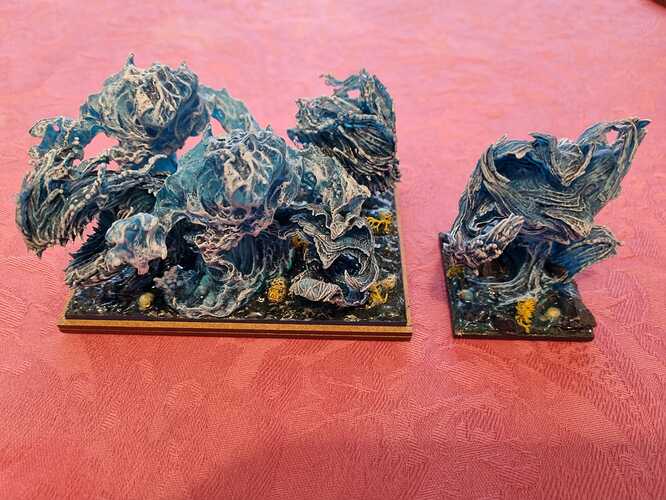 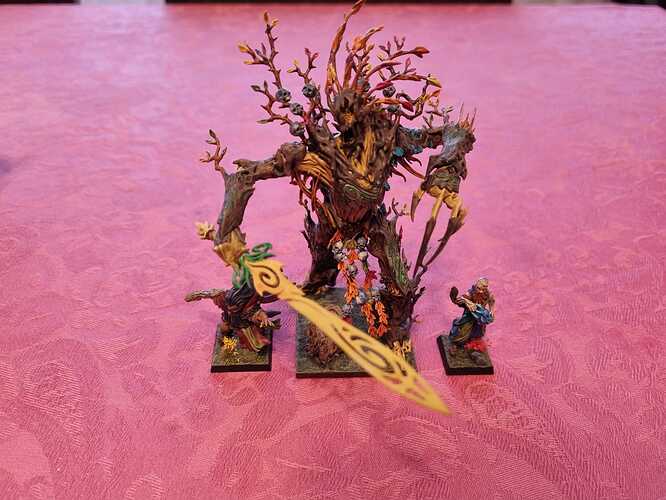 And regarding the battle, here are some pictures. 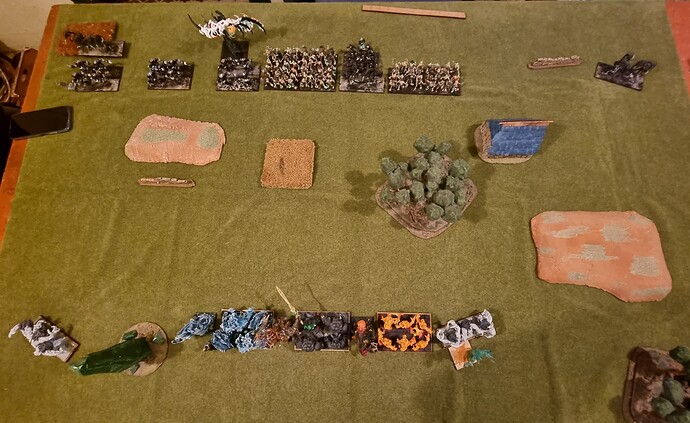 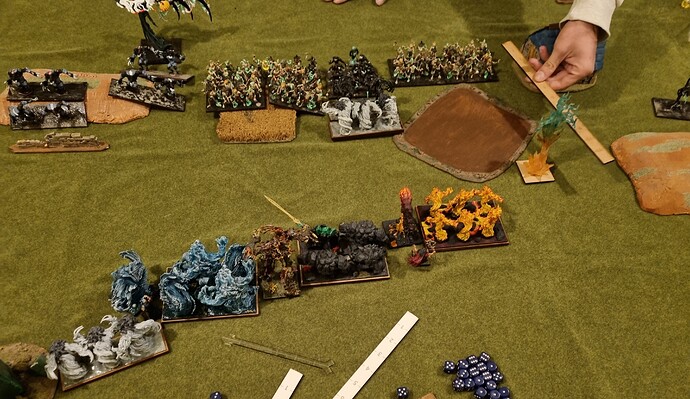 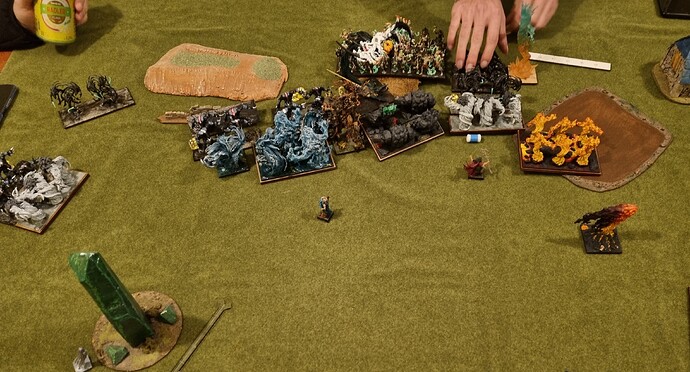 I kept the line very close to null somehow they numeric superiority while my air elemental positioned looking for flanks. This lead my oponnet to get stuck in the middle of the board and I was lucky deleting his flank units soon.

Nice list! I appreciate that there are no items on the elementals themselves, so you get a more pure idea what the units can do. Quite often I see elementals ‘fixed’ with strength or the hammer or nimble or sharpness, which muddies the waters of analysis. The two super Gladewalkers are smart, and I love the new Crown for that 18" surge (in theory, I haven’t played with it yet). I’ll also applaud you on no bane chant - I’m working on weaning myself off of BC too.

I agree with your thoughts on Earth. While the horde is a great anvil and the greater has impressive stats, I always find myself reaching for Water if I want a horde or small base anvil that interacts with the game more. If you’re ok with losing some of your theme - no Earth at all! - swapping the rocks out for another Water horde makes a lot of sense to me. If you needed theme, you could swap the rocks for a Forest horde, which with the Tree Herder both represent earth to some extent but also make a scouting package that’s there to play for objectives and so on. Plus give you an excuse to put them together.

EDIT: Thoughts on the formation? I hear people raving about it, but I’m not sure brutal solves Air hordes’ issues.

thaks for your feedback. I think those objects overprice units already expensive and makes difficult to take advantage of them (in the end they can still be wiped in a round of combat). Those extra points are just better spent on the druids. Talking about that, The main use I give the crown is surging my Air Elemental after flying over and enemy unit and sometimes I lacked those extra 6’.

Up to now I keep the earth horde mainly because I neither don’t have a second horde of water yet, nor I haven’t built the trees yet, but probably in the future they will leave the list (despite I love the models).

For the formation; today I tried a list and it’s as bad as it looks. Regeneration on air elementals is close to useless and the brutal aura doesn’t worh the extra points. If at least they weren’t 2 hordes of air … Despite they can do an extra long charge, they just don’t have strengh enough to wipe anything in a single round so they get stuck in the middle of the enemy army without a close inspirin. It’s true it wasn’t my best game, but I missed the air chaff and didn’t know what to do with the hordes.

Some shots of my game against Undead: 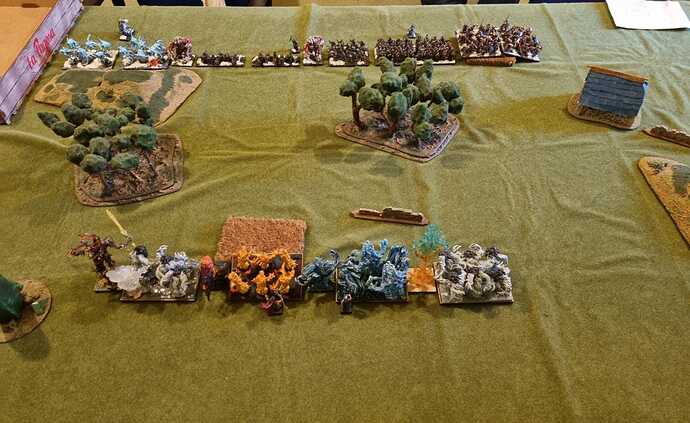 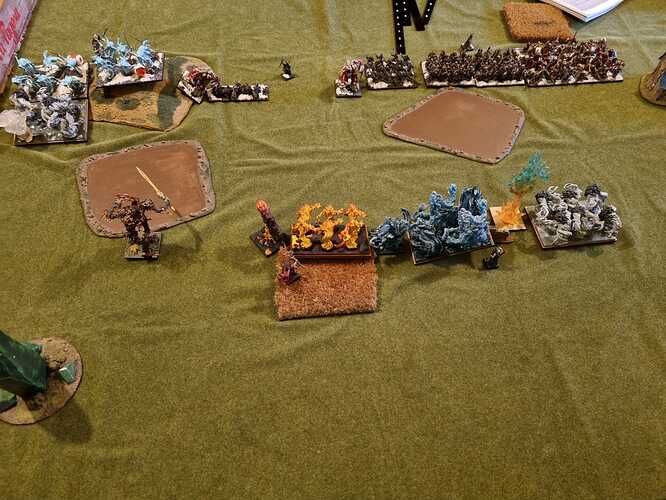 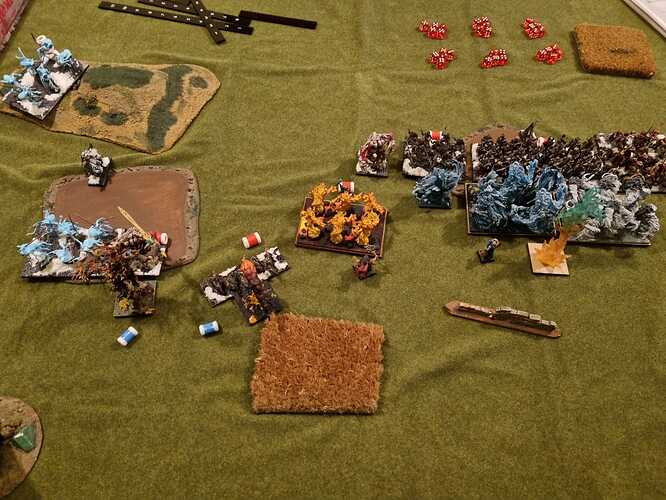