So I’ve been pretty quiet of late, working out how best to import some of my existing models over to Kings of War and maybe even trying my hand at some multi basing. I have ideas. Lots of ideas. Too many ideas which seem to jump from one army to another, but I’ve finally settled on a few projects to keep me entertained and hopefully out of trouble.

Empire of Dust: Direct import of the small selection of Ossiarch Bonereapers I had collected, which will represent units such as mummies, revenant cavalry and maybe some characters. This will be further enhanced by Kings of War Empire of Dust models when they’re back in stock.
Twilight Elves: So I have quite the collection of TT Combat Desert Elves from their last Kickstarter, as well as a small selection of Witch Elves which can be repurposed. The idea will be a living statue/blood magic/soul binding army with a coven of lower crones controlling/leading each regiment. I’m thinking of ruined temple multi basing, and the statues could weep tears of blood?
Kings of War Ogres: Straight up just like the models, and I’ve already acquired myself an army box. Painting wise, I’m thinking paler brown skin, orange hair and blue warpaint. Pictish/Highland theme.

As for progress, I’ve made a batch of Multibases for the Empires of Dust. Six regiments, four Infantry and two Cavalry. Nothing special at the moment, but I’m already thinking of incorporating some characters into the bases and maybe small pieces of terrain 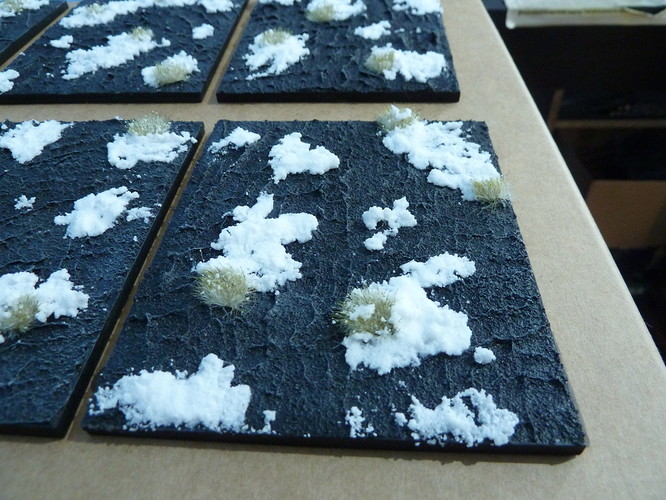 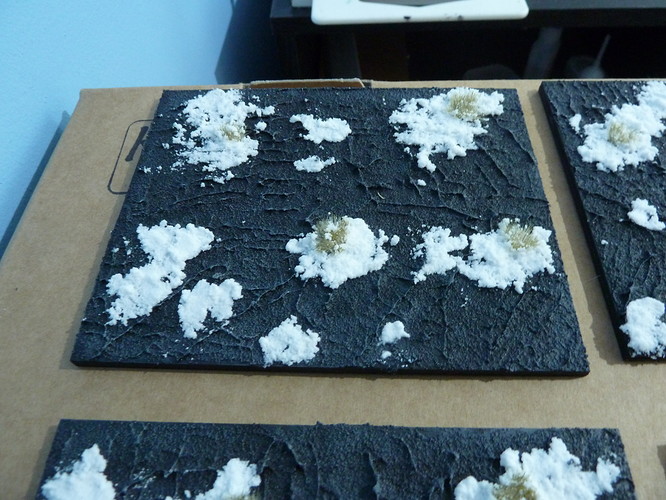 Also, some of the models I have removed from their bases and a quick mock-up of the general contrast between model and base. 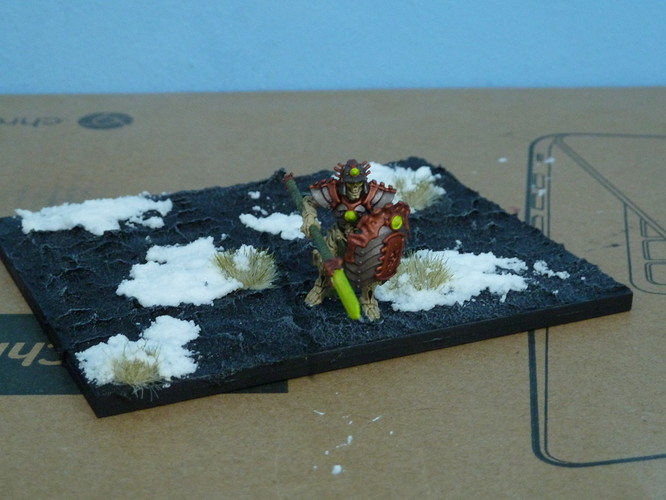 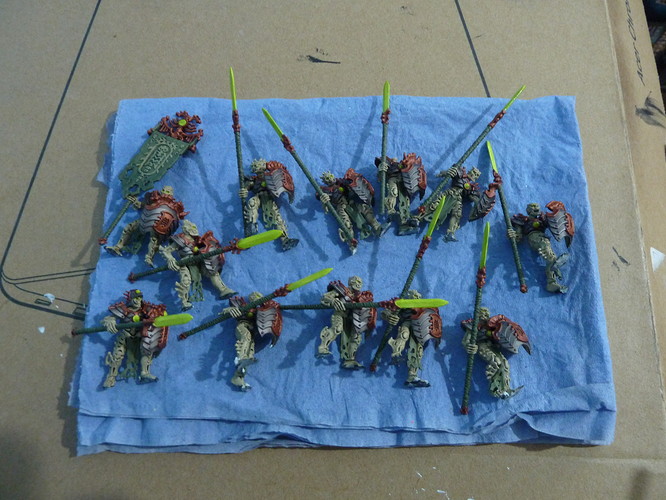 Aren’t those bonereapers insanely expensive? Or have they gone down in price?

Also, how did you pull off that texture on the multibases? Did you use grout?

Nothing so intuitive for the texture. I use Vallejo Black Lava Texture from when I used to base models individually. It comes in a 200ml tub, is fantastic to work with for creating small desert-like features and is surprisingly economical. Those 6 regiment bases caused hardly a dent to what’s left in the tub. I think I may continue this method for my Empire of Dust, but have other ideas for the Twilight Kin.
I have my own application tool, which is an old drybrush with half the handle snapped off at a diagonal. This gives you a nice flat-ish surface for scooping and applying the texture paint. I then gently smooth out the texture paint with the rounded side so you have a thin but even spread over the MDF. Lastly, I flip back round to the flat side and tap as much of the flat across the texture paint, which sticks and creates all those little ridges you currently see. The main benefit I find with the Vallejo texture over grout is that it holds a slight elasticity once dry, which makes affixing the models to the base a bit easier.

As for the Bonereapers, the infantry is quite cheap by GW standards. A box of 20 is £35 direct. Independent retailers are anywhere between £28-£30, but you can find good deals if your willing to search secondhand and maybe spend a little bit of TLC stripping the models back to bare plastic. I got a job lot of spearmen, cavalry and one character for just over £1.25 per model secondhand. They are a nice little experiment for my first foray into multi basing and I’m planning on using Mantic Empire of Dust and maybe some TT Combat Desert of the Dead for the remainder of the force.

So, bit of an update. I’ve converted my Mortek Guard from individual bases onto multi bases over the weekend. They were actually finished last night, but getting half-decent photos of the unit was proving problematic. 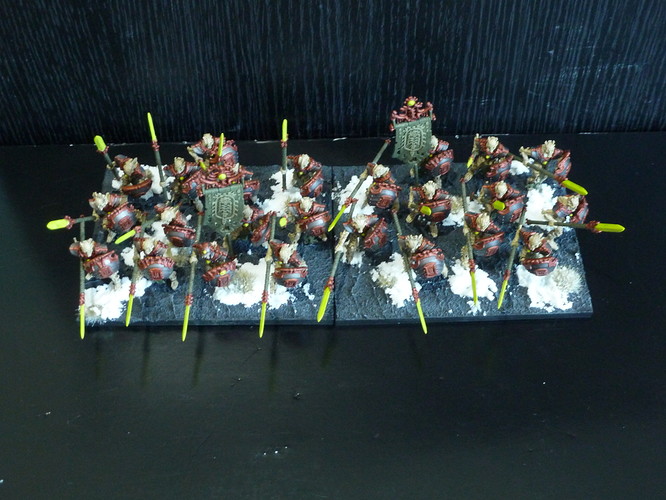 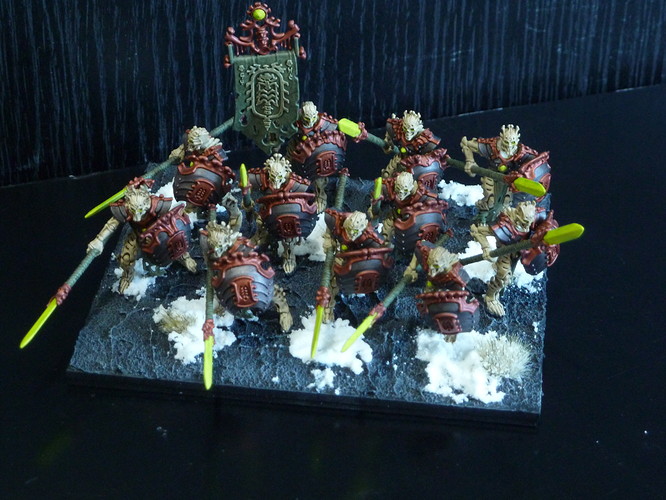 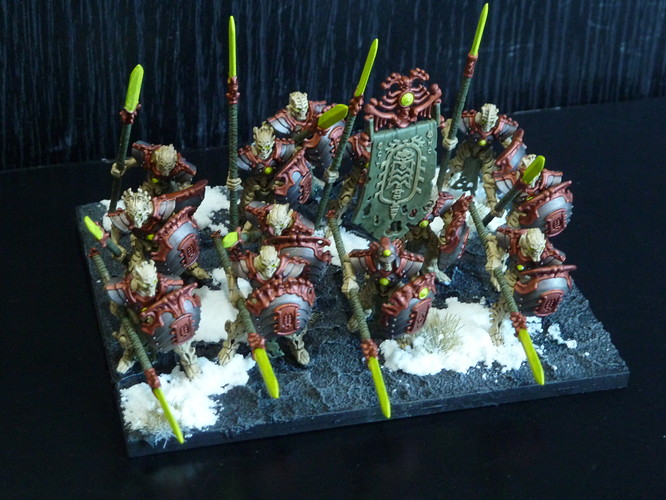 Initially, I hoped to squeeze about fifteen dudes onto a single base, but these guys are pretty bulky when you take their stance and shields into account.

Next, I’m cleaning up some ogres and collecting shards of slate whilst out walking the mongrel.

Looking good, nice volume of models on the base. Also props on doing EoD with Bonereapers, first I’ve seen it done (probably in part because $$$$).

Yeah, Ossiarch seem to be the contemporary design for Tomb Kings, but a whole army of the blighters would certainly be expensive. I think a mix’n’match, drafting them in for some of the more elite options such as Mummies, Revenants and the odd Pharoh would be sufficient. I’ve got some Kavalos Deathiders lined up as Revenant cavalry and maybe even a Arch-Kavalos on steed as a Pharoh on Chariot. It’s a pretty big model with good height and fills a chariot base quite nicely.

While slowly cleaning up the Ogres, I’m brainstorming some ideas for painting the Nightstalker elements for the Blood Magic Twilight Kin. Not sure if they should be pale sickly flesh with bright visceral gore on the tentacles and teeth, think Silent Hill, or maybe painting them to look as if they are actually formed out of blood themselves…

In other news, I recently got a textured rolling pin so I can start making some cracked tiles for the Twilight Kin bases.

So, been a bit quiet for the past two weeks. My partner and I have finally made the commitment and bought into Pokemon Sword & Shield which has put an offensively large dent into my hobby time.

I have, however, manage to play around with some Sculpty and baked the first stages of the ‘Ancient Horror’ temple bases my Twilight Kin have come to inhabit. 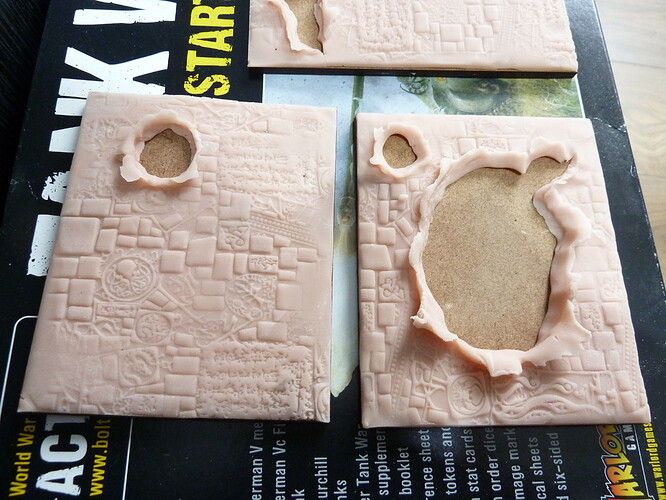 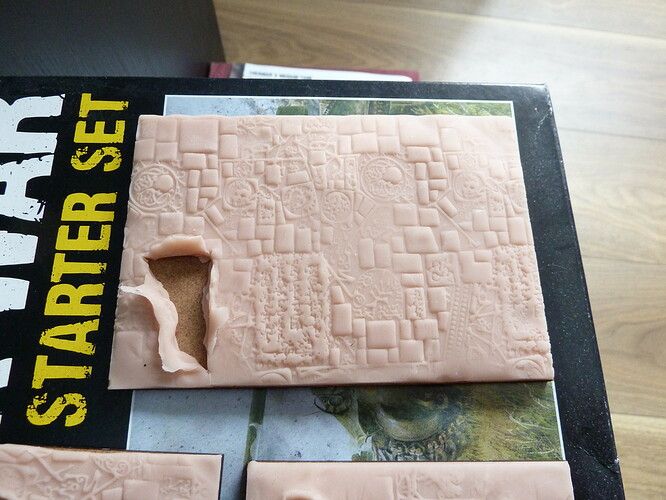 P10201394000×3000 1.92 MB
I have this idea of a lake of blood rupturing through the flagstones and giving birth to the horrors my coven of Crones summon from the darkened abyss of the veil. Tentacles, teeth and an unhealthy amount of viscera.

Meanwhile, I slapped some paint on a couple of models to try and pin down the theme between living statues crying tears of blood and the aspiring Crones who performed the blood rituals to bind the souls of their victims to create ‘Bloodforged’ automatons. 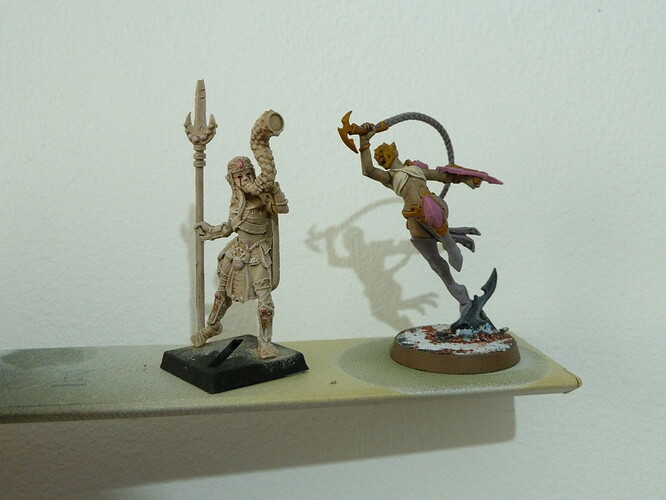 P10201464000×3000 1.65 MB
The main theme was aged alabaster with a few gems picked out in a bright glossy red, though I’m willing to allude to the use of bones and sinew to craft the sculptures. This also leads-in nicely to the image of the Nightstalkers adopting their physical forms out of the charnel pits after the Crones have had a merry evening of ritualised sacrifice.

Real-life thinking: While the idea of a Living Statue army does have an appeal, I’m conscious of the monotony and thought one vibrant model per unit would help break up the muted palette while units of blood-dripping flayed carcasses would make a stark contrast to all the neutral whites of stones and robes.

Love the progress of this.

As you say, a few bits of spot colour - a different paint scheme on a model etc - can really give the unit a kick visually.

Cheers bud! Glad the idea shows promise and not just a vagrant particle of misplaced inspiration rattling 'round my head like an empty spray tin.

So I played around with some putty, poked and prodded at it after a couple of hours of being left to its own devices, and I’m pleased to say, have a small and poorly photographed update. 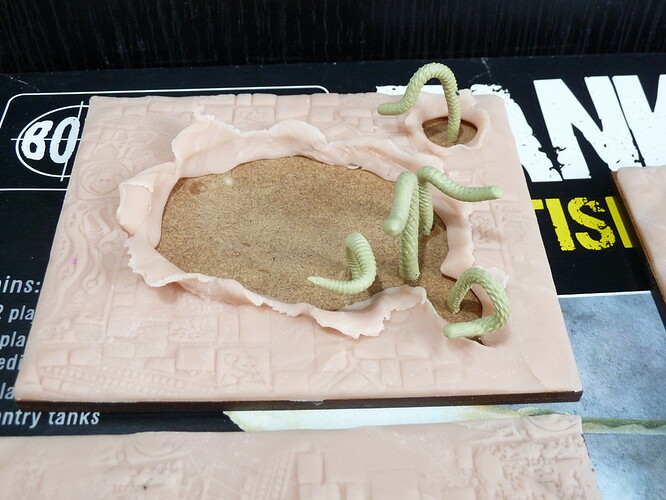 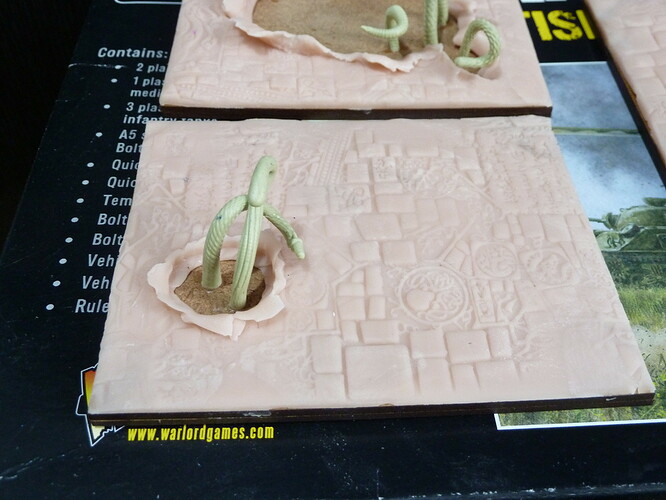 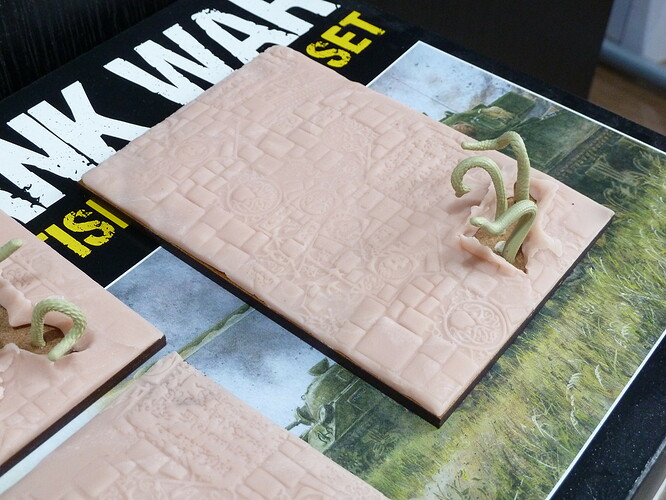 Some of the tentacles look suspiciously phallic in appearance, but otherwise, I’m pleased with the results.
Two of the bases are for Longspears and Butchers, while the sizable fissure is the start of a regiment of Bloodworms. Another twelve tentacles are curing as I type and I’ll probably churn out another batch this weekend.

These are already looking great!

I’m on a quest, a quest for ships. Sailings how I get my fix…

So, I decided to take the plunge and went all-in for Armada, buying not only the starter box but a starter fleet for each faction. 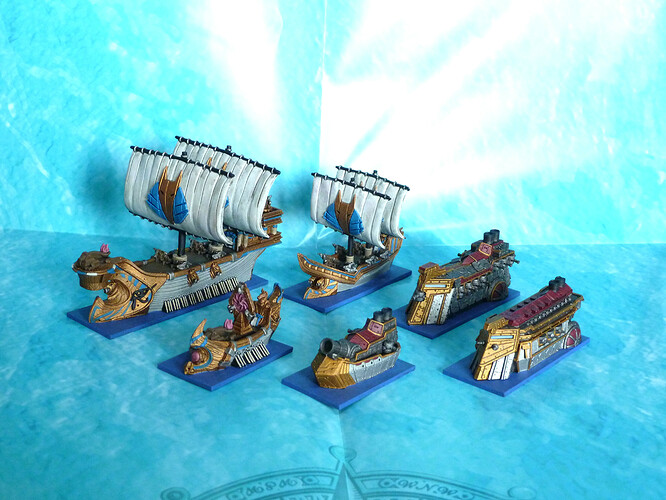 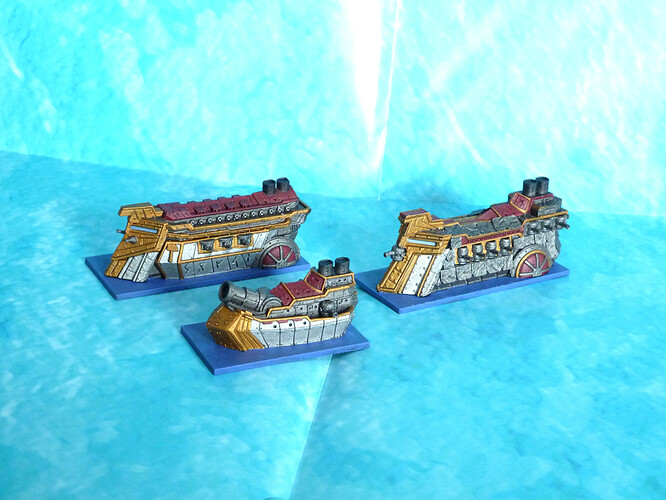 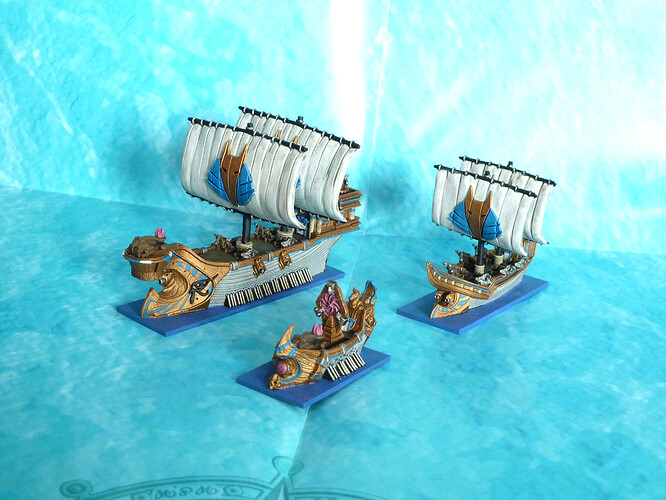 Love the detail of the sculpts and couldn’t wait to crack open the Empire of Dust and Dwarf fleets. I stuck with the standard box paint scheme and found they were an absolute joy to paint. Even the sails. Next will be the Orc half of the starter box.

It does mean the progress of the Twilight Kin has been somewhat hampered, but I’m now back to working on the bases so I can then dive into painting up some spears and butchers.

Another mini update. This time of the Twilight Kin I should have been working on for the past month. All three units are at different stages, but I hope to get them finished before next weekend. Excuse the glossy shine. 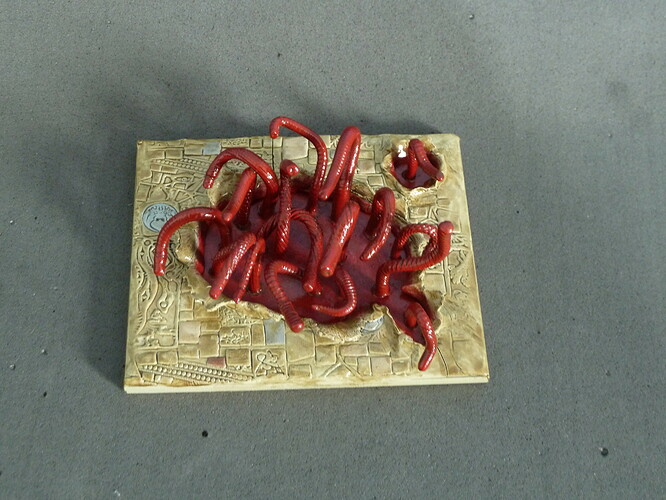 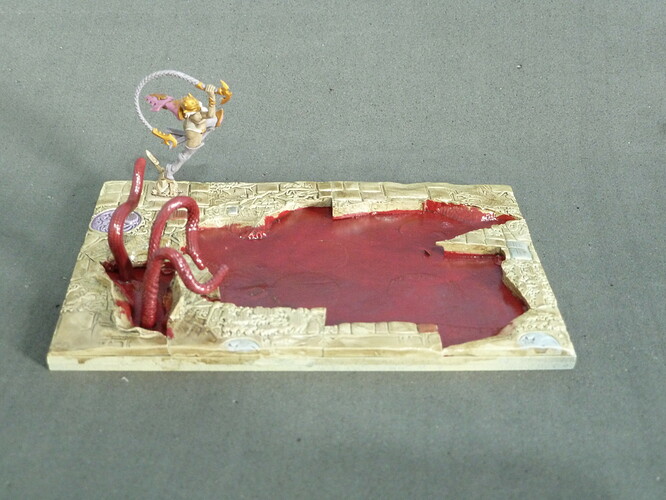 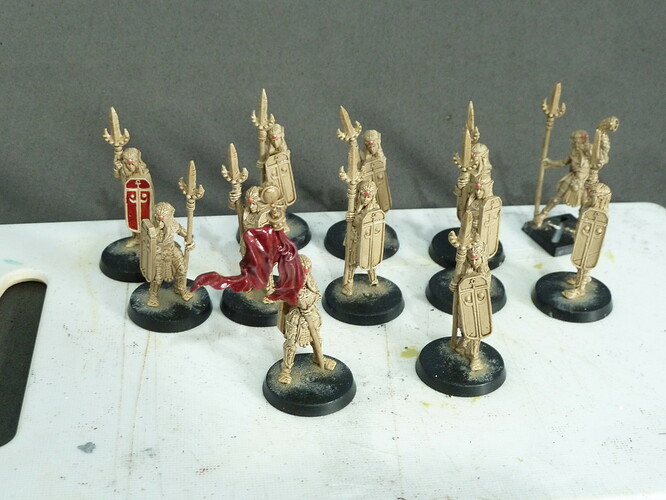 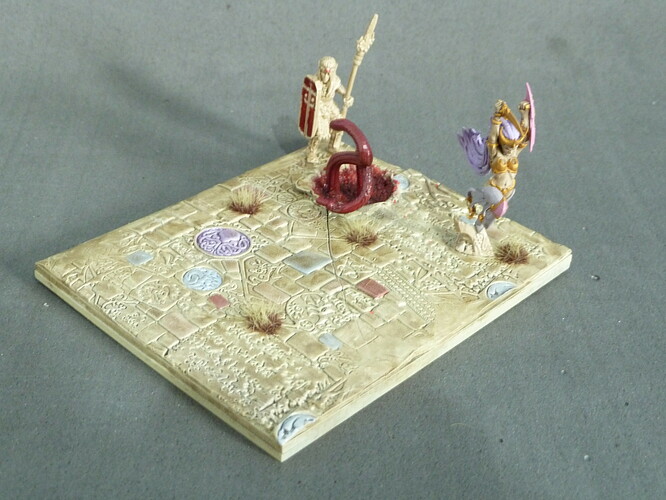 So we have the regiment of Bloodworms needing some texture added to the pool of viscera and a few tufts of withered grass sprouting between the paving stones.
The base for the Butchers, waiting on said Butchers, followed by texture and tufts. I was thinking of having the Nightstalkers emerging from the fissures and pools of gore with a masked neophyte Crone driving them forward with a whip.
Lastly, the rank and file of the Tallspears, followed by their base. I decided to add a little colour to the shields, just to break up the wall of sandstone/weathered alabaster. The ‘Elven’ regiments will be led by unmasked neophytes and the power of 80’s glam rock hair.

The blood worms are looking quite gross, which is I believe a good sign of progress for blood worms.

I’ve had a change of heart on the colour of the bases. The desert theme just wasn’t working for me visually. The red of the Nightstalkers wasn’t too bad, but the similarities between the ‘statues’ and the bases was less than impressive to my eye.

I do, however, bring you one completed horde of Butchers. Well, horde may be a tenuous description, but I’m hoping rule of cool makes up for one below preferred model count. 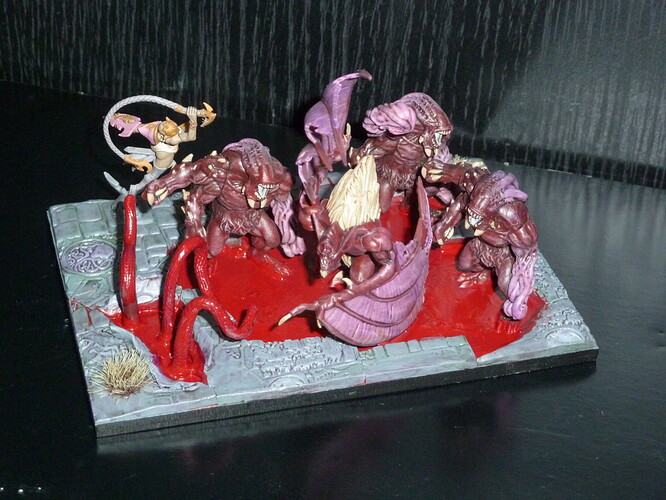 Bloodworms are away to get their own pool of blood and glossy viscera before I call them done.

I wouldn’t worry @FutaManticore, I see 5 models on the base!

Looking good there on the butchers mate!

Kinda glad I procrastinated with the Nightstalker scheme and the colour of the bases. Now I just need to reevaluate my elves… I’m now leaning towards a brighter, more colourful ethereal purple with gold and glowy green bits…

In other news, the Bloodworms have been ready for a while, but only just gotten round to taking some pics 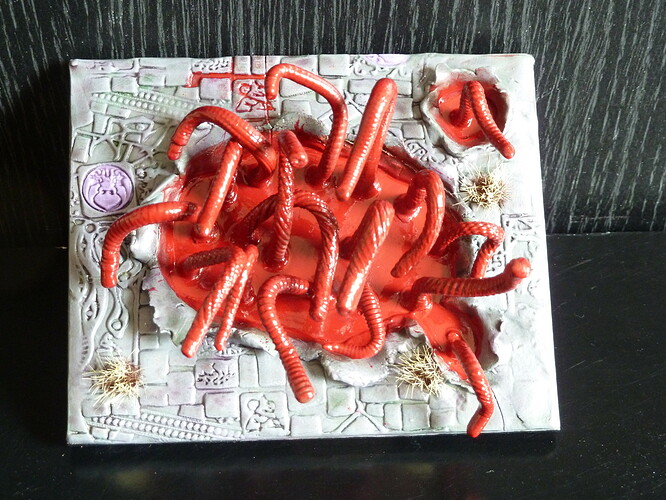 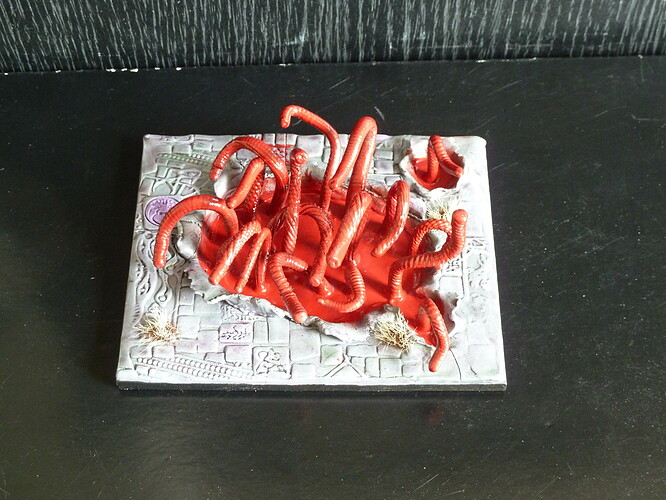 Next up will be some more Armada Dwarfs.