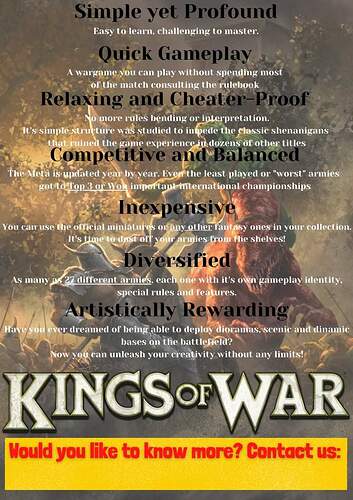 So, after seeing this graphic that someone made about Kings of War and posted to the fanatics page, it got me thinking, what is it about Kings of War that adds up to such a great game? And how would you go about measuring different aspects of games to determine similarities and differences between games?

One way is to identify different properties that you like - for example the movement format (skirmish/ranks & flanks), turns format (alternating activations/you-go-I-go), amount of time a game takes, etc. But the graphic also identifies things that are more complex than just format or mechanic based, and they’re much more the things that I look for in a game - I’m thinking about simplicity vs complexity, depth, balance etc.

So - what I’d like to do is create a system to identify these characteristics of tabletop games via a mechanism that takes the answers to a set of questions and processes them into scores for a set of metrics. Kind of like a personality test for tabletop games. I’m envisaging the outcome of all this to be some kind of website platform thing where you can find games that you might like based on other games that you like, but there’s a bunch of nuts and bolts that need to get sorted out first.

…and then your answer gets put into some magic formula along with all your other answers to establish characteristic scores for the game you’re scoring.

I’ve come up with a few characteristics, but i’d be interested in what people think / if people think other things :

Other than determining a set of characteristics, another difficult bit is coming up with the kind of questions that relate to the characteristics, and are asked in such a way as to force an honest answer. You couldn’t just ask ‘how strategic is this game’, or ‘is there power creep based on the latest miniature releases’ because those are really subjective questions and would often come down to how much you like the game.

Here is what i’ve got so far (all sliding scale questions):

A bunch of these questions really don’t fulfil the requirement of being objective. I think probably the best way to do it is use the format that I had in my example question above, but it’s hard to do that… Anyway - would love to get people’s input on this! Have I missed any categories? Do you have some question suggestions? Have I completely lost the plot?