Getting into Armada (finally) with the EoD fleet

My EoD fleet arrived a week ago after taking a merry round around the world oceans and taking almost full 3 months since I ordered it at my local retailer. Thus, finally, I can launch myself fully into playing the game after 3 previous test games with orc and Basilean fleets borrowed from my friends. I am also looking forward to painting the ships, they look really lovely.

However, after reading the specific rules provided on the EoD cards I am quite a bit confused. My understanding is that the two fleet specific rules, Curse of Undeath and Light Oars, apply to all EoD ships. Is it really so. If it is, then why Light Oars is still enlisted on cards of some ships but not on all EoD ship cards. And if the rule needs to be enlisted on the ship card to apply, why there are no ships with Curse of Undeath. I guess listing the Light Oars on the Dust Chaser and Soul Hunter cards is redundant as all EoD ships get it but would like to have it confirmed. It also confuses me that the War Galley has the rule Oars (no Light there). Is it just an omission or does Oars provide something better than Light Oars?

It’s a pity noone answered my queries, I guess not many people on the forum play Armada or have experience with the EoD fleet. Anyway, I am continuing with preparations for putting my fleet on the table, started to paint the first two ships. I also ordered the XL Monolith and another EoD starter box to expand on the starter and booster boxes I already have. I hope this will provide me with sufficient options when composing the fleet at around 200-250 points.

I also got a friend with a 3d printer who designed and printed nice card holders for my ship cards. I should add that I am not a big fan of the original ship cards provided by Mantic. Well, they are nice and do the job but I find them unnecessary large and not so clearly arranged. Thus, I made my own cards for my ships. They are made to fit into standard card sleeves for e.g. Magic the gathering and (in my view) easier to look at when one wants to check a ship characteristics quickly. See the pictures of my card holder without and with a card below. The EoD symbol and ship pictures on my custom cards are taken from the original cards by Mantic. 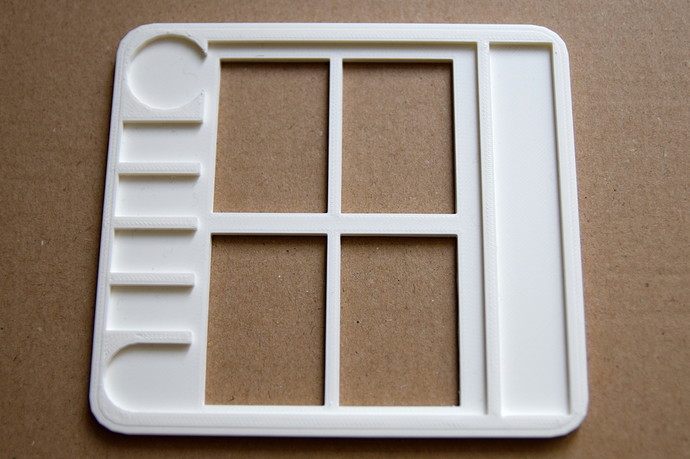 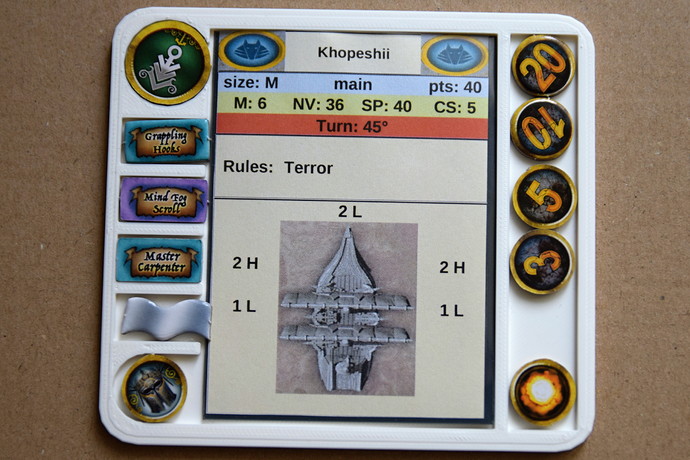 I wish that I could help with questions, but sadly I haven’t had a chance to try armada yet. Right now my opinion of the EoD ships is that they look extremely neat, but I realize that’s not exactly helpful.

I like your card design, it’s very clear and well organized.

Very nice cardholder! The mantic MDF ones are somewhat large and awkward.

So I’ve got some EoD ships painted, some more in progress, and the XL ship on order. I’ve played exactly one test game so far, so take my rules guesses with a grain of salt.

We interpreted the Curse of Undeath as being a fleet-wide rule, but the light oars as specific to the ships. That being on the (dubious) notion that the models with the rule have oars, and the ones without don’t, so WYSIWYG.

We also couldn’t figure out the difference between Oars and Light Oars, though.

We interpreted the Curse of Undeath as being a fleet-wide rule, but the light oars as specific to the ships. That being on the (dubious) notion that the models with the rule have oars, and the ones without don’t, so WYSIWYG.

That’s really an interesting idea and thanks for your response! You may got the Light Oars rule interpreted correctly. However, I still find it strange that Curse of Undeath is to be applied fleet-wide and Light Oars not. Both rules seem to be specified in exactly the same way on the EoD explanation card provided in the starter box.

Hello the difference between light oars and oars are as follows. Oars allow you to turn once before one of your moves. Light oars are the same except they also allow you to move between two inches and your maximum move on one of those moves. Hope this helps.

Thanks a lot for explaining the Oars rule. Is it written anywhere. At least I do not see it on the cards I got with the EoD starter box. And are you sure the Light Oars allows for turning the ship prior to moving it too. On the card I got it just says that the ship can reduce the movement in one Move Step (to be between 2" and the Mv value), no word about turning it there.

EDIT: Ah, I managed to find the Oars rule. It is on page 36 of the Armada rulebook, in the Additional Rules section. A strange place to look for it as it is put in one bag with explanations of squadrons, repairs and leaving the battle.

Curse of Undeath applies to the entire fleet, which is why it is not duplicated on the ship cards. Light Oars is a special keyword and so only applies to those ships that have that keyword.

Oars and Light Oars work in different ways. They each have their own rules. Light Oars don’t use the same rules that (full) Oars do.

Many thanks for your response! It’s good to have the matter clarified.