Mantic has released the beta rules for the new Halflings, with final rules to come in COK '21: https://bit.ly/3ynH6YN

IMO a very cool army that builds different ways depending on how much you want to lean into different keywords, as there’s rules support in multiple directions instead of 1-2 like many of the release factions. So here’s a thread for to get your scheming on

EDIT: Word is that Mantic has asked the beta rules be added to EasyArmy, which will make large scale tinkering easier

EDIT2: Further word is that the US0 on the Winged Aralez and Troll Hero are typos, should be US1.

I’ll go first. While I don’t think it’s the most effective build at all, I’m immediately drawn to the Troll angle, because I love global pathfinder, but I’m also more likely to actually make this army (Halflings themselves aren’t really a thing of mine).

Next round of tinkering will probably be to wedge an engineer in, likely by messing with the trolls / gunners ratio

UPDATE: Broke down a gunner reg into a unit of stalwarts as true chaff + third inspiring:

UPDATE 2: I’m back from the future once COK22 was released … to report that next to nothing has changed for Halflings, apart from the names gelling

The Troll list is still my favorite, and honestly the list above is where I’d still go, maybe with some rifles swapped in to maintain the shooting pressure:

Oh, I also swapped a Harvester over for more Gunners. I just don’t really like the Harvester, but the model is cool and after a bunch of analysis I discovered it’s Me 3+, which is a thing.

That’s quite a few Trolls… o_O

The first list scares me a bit, defence 5+ with Regeneration is a tough nut to crack. That being said I think the second list has a bit more flexibility.

Love the Hobbit sculpts and he rules are cool as well. I do not believe they are a force for beginners as they seem to need a lot of synergy to have success, especially with characters.
Aeronauts are going to be popular.
Whats with the US zero for big meanie flyers though? Hopefully that doesn’t become a thing, dragon riders will hate that!

I’ve already got a very steampunky KoM army in progress, and I’m thinking of doing my Halflings the same. A big block of Stalwarts with the Engineer special ability seems fun, Iron Resolve + Radiance of Life should see them soaking quite a bit of damage, especially with Lifeleech potential. Stalwart troops with the Crush seem like decent flanker options to keep nearby.

I’m not sure about the Trolls yet, unless I can kitbash them into something fun, but I will always bring the Mecha-Pig.

Whats with the US zero for big meanie flyers though? Hopefully that doesn’t become a thing, dragon riders will hate that!

Think the RC have cleared that typo up, should be US 1.

Certainly think that if you are running a mainly “halfling” list then a couple of saucerors (horn and inspiring) are going to feature heavily.

The troll heavy lists are definitely workable - pathfinder and the extra waver nerve point are worth the increased points. You aren’t going to get huge ranged punch out of the troll gunners, but it’s handy.

The bombing units both look a touch swingy, but elite/vicious or just blade of slashing can help give relatively low number of dice

Infantry - Braves & Spears comparable with goblin options, few points more for Spellward. Spears get a nice bump in US for hitting 100pts.

Ranged infantry - Poachers with bows not having steady aim, while rifles do seems odd. Vicious in melee seems a bit pointless other than for fluff.

Rifles seem v good as they shoot like Naiad Heartpiercers - poorer Rat but on a cheaper base unit that scales up to horde size. Not irregular, potential for abuse?

Cavalry - Juggers and Melee Wild Runner (not keen on the cav names ) seem too similar profile-wise.

Large infantry: Like the gist of these units but still mulling them over. Lots of flavour that I hadn’t expected here. IMO Ej is a daft name for anything.

Characters: Sauceror (not a fan of the food theme, but could be worse) - an interesting way to do non-magic magic. Seems v flexible as effectively has 4 spells. Hard to upgrade as spell magic items won’t help. Quite long special rules for KoW.

Engineer: You’d always upgrade to the Long Rifle? Gadgets & Gizmos, Iron Resolve in this list seems tied to Aralez - seems odd to have it coming from a second source, why not another special rule?

Winged Aralez - no Radiance of Life, does that mean the Duke in Rhordia brings it? Basically a General on Winged Beast with Iron Resolve & Spellward not as Inspiring - seems like a very competitive choice.

Haven’t really taken in the other characters yet.

You don’t seem to keen on the Shirelings…

There was a comment made in one of the FB threads that the engineer gun upgrade is +15.

Having de5 and de4 cav with simply differing attacks/nerve is a touch odd - might have bumped the wild rider speed and upped the price a touch?

That would make sense on the rifle.

Normally, I think the distinction between the two cav units would be nimble but as the knights are intended to have it as well, something like a speed 9 on the Runners would make a nice difference.

Some stuff seems cool, other stuff less so. Seems worth mentioning as it’s a beta list.

I think Halflings is a race that’s tricky to do well, compared to other staples like Elves, Dwarves, Orcs etc.

Interested in people’s opinions on Stalwarts - I’m not sure which unit they’re most comparable to?

Edit: They pretty much fall in between KoM Pole-arms and Foot Guard, both in stats & points.

The most recent blog post about the army design is interesting, coupled with the rule design one.

With the general halfling vibe it would have been too easy to just make another goblin or ratkin style army. This does have some clear comparisons with the former, although the aura v magic thing helps.

Stalwarts - there aren’t too many me4, de5 units kicking around that don’t have cs1 inbuilt (orcs, clansmen, sallies etc).

The other thing with this list, which I’ve mentioned on the odd FB post is that this could be awesome for doing a hun or mongol style force - lots of nimble cavalry, some solid shooting options and plenty if supporting characters 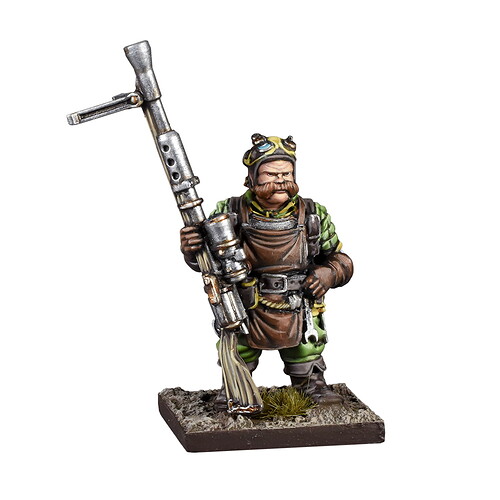 Designing the halflings for Kings of War - Mantic Games

Continuing our deep dive into the new halfling army for Kings of War, Dave from...

I’d thought something similar - lots of parallels to the KoM list, so worth considering as an alternative.

I do find the more time I spend with the list, the more often I have to check myself that this is a beta list afterall. Stuff like the heavy doggos still having nimble, or so many things being true inspiring instead of keyword-inspiring (especially as we hear talk of COK21 having ways to expand conditional inspiring), or the missing things like US1 or the Engineer’s upgraded gun cost. Or how the Wild Runners variants are (Melee) or (Ranged) instead of having a cute name or Sergeants / Scouts at least.

Speaking of Dash28, Mike put up an initial review shortly after the rules went up, if you’d like a tournament player’s first thoughts:

Also, fair point on the blackpowder having Steady Aim not really making sense, when you consider that blackpowder in KOM has Potshot (but longer range, so maybe that’s the argument here).

Cheers for the link - I’ll give this a watch. (Edit: Only watch the last 5 minutes or so as he basically just reads the list before then.)

Now that you mention it, I am tempted to run my Mongolians with this list. Got a few mounted shamans, and a shed load of cavalry in the 3 types available to the list. Being able to run the equivalent of Mounted Sergeants in a Horde is quite tempting.

The utility of the Sauceron is quite the boost to the cavalry.