I’m new and need some help with an Undead list

I’ve got a bunch of Mantic undead minis and I’m not sure what to buy next in order to build a decent 1000 point list and build up to a 2-2300 point army and I’d like some advice.

Here’s what I have:

Primed but not built—

I can build the regiments as hordes if that would be better.

I’m really not sure what to buy next.

Any and all advice appreciated!

You have a lot of the typical mainline undead. The cheap and expendable zombies and skeletons.
You could maybe use one more skellie regiment to switch between 2 x regs and a horde if you put them in a tray or simply next to each other.
You could make a token saying they are spearmen if you want to try them with spears.

Ghouls are good in all sizes so I would make 2 x troops.

Catapults are quick to build and easy to paint so two of those can be alright to try.

But other than that you need to get some punch in your list. Mummies, Soul Reaver Inf, Goreblight, for instance. And some better Heroes. Liche King, Pharao, a big dragon with a Vampire or Revenant on top. Basically anything with Crushing 2 or more.

Yes, more punch as Fred said. I like werewolves, because you don’t have to surge them into melee. Goreblight is really good. Cavalry is a good choice, a mix between speed and punch. You can basically go everywhere from this point.

I’ve been thinking about picking up some zombie trolls, a couple of Goreblight and cav.

Which cav is better?

Are wights a good option?

What about soul reaver infantry? Are they as good as the trolls or wights?

As far as heroes go the liche king appeals to me and I’d like at least one more necromancer but I’ve been torn about getting the Vampire or Revenant on the undead dragon. Which do you prefer?

If zombie trolls, Goreblights and Necromancers appeal to you, give the Necromancer the Aura. It gives Zombies, Zombietrolls and Goreblights ‘vicious (melee)’.
Wights seem really good. I’ll get a horde some day.
Both cavs seem good, but Soul Reaver cavalry is really expensive. So maybe the rev-cav is the more playable alternative.
All these tips may be totally worthless, I’m new to KOW too!

Soul Reaver Infantry will occasionally make your very happy. They hit like a train when played right.

Wights are very good. Almost a little overpowered on the CS so might be a little overpriced. Also the metal models are cumbersome. I suggest alternative models.

Not a fan of zombie trolls myself. Also heavy metal models.

I forgot your wraiths, more of those would also be great.

Its hard to give too concrete tips because undead is a very strong and versatile list so you cant really go too wrong.

Recently I wrote a review for undead in 3rd edition, you can find the links here:

Kings of War 3rd edition has officially landed and since I received the book yesterday, I can start reviewing my armies. The first to be reviewed is Undead: Disclaimer For obvious reasons, I’… 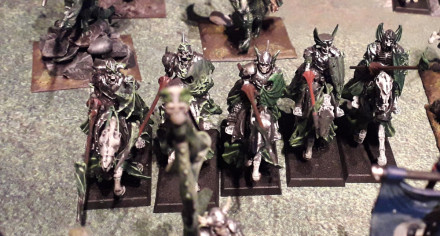 Yesterday I posted the first part of my Undead 3rd edition review. Today part (2) of this review. I’ll continue where I stopped there, reviewing cavalry, large infantry and the undead sole wa… 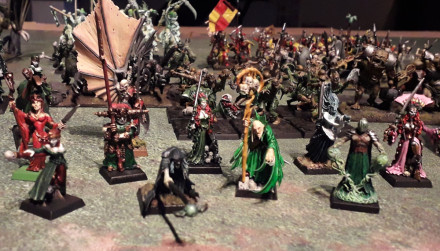 Yesterday and the day before I posted the first and second parts of of my Undead 3rd edition review. Today concludes the final part of this review. Today it’s just the heroes, but please bear…

As for your questions:
Undead have wonderful anvil-units. (Anvil = unit that can take on a beating without routing, preferably at a discount cost). In your collection, the zombie legion, revenants and skeletons furfil that role. In a 2,000 point army I would feature two anvil units, in 2,300 maybe three.

As for your collection, I would build your skeletons as two regiments (or a regiment and 2 troops) so you can either field them as a horde together or separately as regiments. Skeletons make great roadblocks and unlocks in regiment size, even better anvils as a horde. As troops, they are surprising resillent and they are amongst the cheapest units in KoW @ 55 points. Here’s an example of my skele horde:

Back in 2nd edition, I worte a “building on a budget” for the undead army which starts out with the Undead mega army which is somewhat like your collection. Even though it’s writen for the 2nd edition rules, some parts may still apply. you’ll find it here:
Edit: especially the analysis on unit role cq strength is off in the 3rd edition. Balefires were useless in 2nd, but quite valid in 3rd. /end edit

An army needs some of the following units:
-Hammers; i.e. stuff that kills.
-units that dictate the flow of battle. Anvils, chaff and blocking units fall into this category.
-support units.

You have plenty of anvils. Combine the zombie legion and skele horde with a pair of ghoul troops and troop of wraiths, you’ll have enough tools to dictate the flow of battle. This means you’ll need some hammers. Amongst several options are:

a) Werewolves
b) Wights
c) Zombie trolls. (I love them!)
d) Revenant cavalry. (in hordes. As regiments/troops, they are not that effective as a hammer due to melee 4+ and only TC)
e) Soul reavers, both infantry and cavalry. @FredOslow hasposted a nice alternative if you hate the original models like me.
f) the hitty character option like vampire on dragon, revenant king on beast, vampire on pegasus.

There’s not much of a meta yet, but the battle reports I see favour soul reavers and revenant kings on undead flywyrm. I have a weakness for wights, zombie trolls and vampires on undead pegasi.

Other than anvils and hammers, you’ll need some support. Unless you go soul reaver/werewolf heavy, you’ll want at least 2 models which can both surge and inspire. Necro+inspiration talisman is usually my first, revenant king the 2nd, but there are other options. Lich king is loved by many and Mhorgoth the obligatory seems ahem exactly that these days.

Balefires have the nice advantage of putting pressure on the enemy by blasting their heavy hitters and/or engaging in counter battery fire. Though I haven’t used them yet (mainly because my other army -KoM- uses artillery extensively), I can immagine them being very effective if used in pairs or trios.

I took a shot at 1000 points based on what you’ve already got:

This is mostly based around having loads of Nv and having the revenants do the heavy lifting, plus it’s all stuff you’ll use eventually in bigger lists. I do wish it had a counter-flanker in there (lykanis is my preference) but wraiths could probably serve that role in a pinch.

Sounds quite good. I played a Zombie legion recently and it performed very well! I’m not sure if you have enough punch though. I think a regiment of wraiths would be better, they did very good in my army, but maybe that’s just a matter of taste. I’m looking forward to a battle report.

Zombie legions still have those 30 attacks@5+, so on average 10 hits, 5 wounds against def 4+. It’s okay, but nowhere in the range of an attack of a regiment of soul reavers. Their main role is absorbing hits, as their -/28 nerve allows for 20 wounds (give or take a few) before in serious danger of routing.

That said, with a defense of 2+; even crappy units can do a lot of damage to zombies. They will last for quite a bit but crumble eventually.

That’s excatly what they did so well in my last game. They withstood. Flanking heavy hitters do the rest. Throw them against regiments of cav or units wit CS. Their bonus in CS or TC is lost, due to def 2+. I totally agree, that Zombies are crap at everything else. Although I cast Bane Chant on them and they managed to rout (finish off) KoM spearmen (with a lucky roll though).

Just started Undead for KoW myself… played them decades ago in WFB. Must say I am missing the equivalent of Dire Wolves. Zombie wolves were always a staple of my Undead back in the day, and as I plan on doing a pure Zombie themed force, their omission is something I miss.

I understand that Mantic want to distance themselves from GW as much as possible, hence doing werewolves in their place.

Deathpack are the closest match to dire wolves I suppose.

I rebased my direwolves as werewolves. It works quite well as they fit as well on a 40X40 base compared to the 50X25 base which was just a bit too narrow. Just base them a bit diagonally.

On top of that, werewolves are very popular, so the ability to field at least a horde (5 models = a horde plus one unit filler) is a good start for any undead army.

If you just want a fast reaction force as dire wolves were, maybe take wraiths instead.
The death pack is also a good alternative; but it needs rebasing as they are on 40x40 bases as well.

furthermore, undead dogs can be included in many infantry regiments as unit upgrades. Dire wolves make good models for this one too.

Finally, dire wolves can function as unit fillers for most cavalry regiments. a regiment of revenant cavalry consisting of 8 revenants and 2 dire wolves looks great and is fully legal.