My son and I have started an Ice and Iron campaign.

We are using the four player campaign with some tweaks, with my son leading the northern alliance and the basileans. I have got the forces of nature and the goblins.

The first two match ups were break through at 100 points each. NA against FoN and Basileans against goblins.

The ice and snow had crept much further south this year, engulfing areas that hadn’t seen snow for decades if not centuries. The forest centaurs were uneasy, they suspected some kind of winter magic was to blame. Banding together their forces headed north in search of the cause.

Meanwhile, a small basilean warband continued its purging of the foul goblins that had been causing problem after problem in the outskirts of their realm.

I’ll add a brief report and the photo I remembered to take later today I hope!

Can’t wait to see how it unfolds! 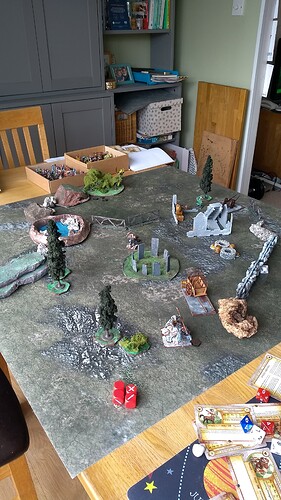 Picture shows the terrain layout and the very end of the FoN Vs NA.

In the first game the forces of nature bumped into the northern alliance coming the other way.

It’s pretty tricky putting together a 100 point list for high model value armies! My son went with a thegn, a frost fang cavalry, two humans and an elf, with liberal furs and snow shoes filling the remaing points.

My FoN had a salamander veteran, two salamander unblooded, a bray hunter and a wild companion.

Frustratingly for my son the weather was calm so his snow shoes and furs were rather useless!

My plan was to hide the wild companion near the trees right on the other side of the battlefield to get a support off the board early, delay his bigger units with the salamanders and be a nuscience with the bray hunter before sprinting her off the battle field towards the end.

My son planned a strong charge down the middle, with his elf harassing from afar.

My plan with the wild companion paid off managing to escape on turn two for plenty of points. Somehow my veteren survived the battle in the middle as my son rushed forward late on after killing the unbloodeds. His elf was the MVP, taking out the brae hunter and very nearly killing the veteran before he could escape.

Luckily for me the veteran made it, and so I won the mission having got a support off early and a command off towards the end, whilst my son got the same off, but his support was later for fewer points.

Some thoughts: I would say this is quite a nice mission for beginners, with the low model count, but I’d probably prefer it at 125 points. The frost fang and thegn are scary, but, luckily, not fast! My son’s mistake was not turning troops round to walk into combat with the wild companion, which would have delayed it, though he only had humans positioned to do it, so I’m not sure how long the delay would have been!

In the post game the one injury was a slow recovery for the brae hunter. Foraging went well for the FoN, building up a decent supply of gold and enough food for now. Northern alliance got plenty of food but are short of gold, so may take a while to add new recruits.

Game two was goblins against basileans with the same mission in the same board. I had goblins and my son had basileans. We swapped sides of the battlefield compared to the last game.

Goblins took a stinggit, a snaggit, two rabble (one with a spear), two spitters and a luggit. The basileans arrived with a dictator, sisterhood scout, man at arms, crossbowman and Gur panther.

Unfortunately I am writing this up a few days later as life got in the way!

My stinggit scouted ahead to make a nuisance of himself and my son got suckered into trying to kill him instead of focusing on the objective. My snaggit set a trap early on to block the main way through and my son sacrificed a man at arms to clear it.

His sisterhood scout was held in place by my spitters, whilst a rabble and a luggit took out his gur panther. The snaggit then got himself off the table whilst the luggit dealt with the crossbowman. My son’s focus on the stinggit paid off in that he was killed, but it lost him the game as he ended up just with a dictator with no quick route off the table.

Post game went pretty well for us both, with only minor injuries and with half decent hauls from exploration.

THOUGHTS POST GAME:
Another fun game, but my son really lost focus on the objective, making it easier. This scenario probably also suits a low cost warband like goblins, and the snaggit was particularly useful!

The next games are snowblind, and I am making sure my son takes a bit more time to think through his tactics and maintains focus on the objective. He does well (and I help him a little now and then) but I think this latest game will be a good learning point for the future!

FLUFF:
As the thegn surveyed his troops he grimaced. Where has those creatures come from? He had thought that the freezing conditions would make the salamanders and they’re forest friends retreat but it seemed to have only made them angry. Still, the weather looked to be getting even worse, and, whilst such conditions are never fun, he and his hardy warband were used to it. He knew the tablet they needed to boost the winter spell was nearby, they just had to find it

Meanwhile, the Basilean troops were happy to have found one another. Whilst injuries had been inflicted by the goblins, it could’ve been worse. The weather was getting worse and worse though… Why? Was some sort of magic afoot? The Paladin chaplain could feel a magical resonance nearby. No doubt and arcanist would. Perhaps finding the source would help them in the battle to rid these lands of the goblin infestation.

We played the next game (snowblind) this evening and I remembered to take a few photos this time.

I think this is a great scenario - it keeps everyone spread out and the limited visibility (4" in the first round 8" in the second) prevents absute carnage from the off (though there was a fair bit of it!)

Deployment is shown below. Northern alliance had a thegn, snow troll, ice Queen, two huscarls, half elf beserker, an elf and a human. My son accidentally put an extra human on the table too but we only noticed in round two so we left it! Goblins had a stinggit, a snaggit, two luggits, a biggit (represented by the luggit with the huge axe!), a Wiz and four rabble (two with spears). The dice on the board marked out the deployment zones. 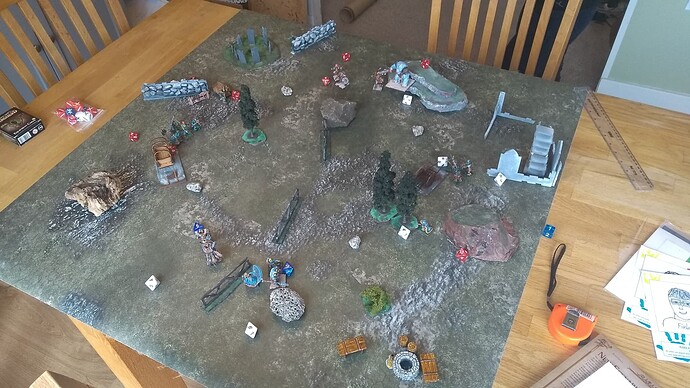 Because one doesn’t know where the tablet will be (apart from it being on one of the stones we used as markers) there are some tactical decisions at deployment. I won the roll off, deployed first and got to go first, whereas my son got to choose deployment zones (each side has two small zones opposite each other). I tried to keep fairly well spread, with a plan to march my Wiz into the middle for when the weather cleared and use my scouting stinggit to annoy and distract (it worked last time!). Everyone else would keep near objectives with the snaggit restricting movement with annoying traps.

Afterwards I asked my son his tactics and he said he “planned to follow you and trust his troops to win the fights”.

After the first round the board looked like this: 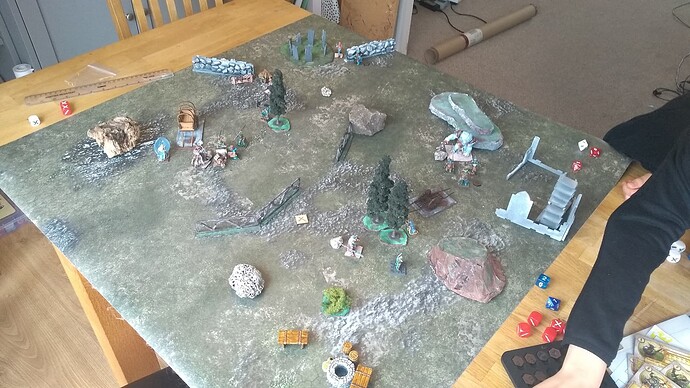 Lots of mini battles underway! The thegn and a human we’re having a bundle with the luggit and rabble, with the ice queen nearby to support. My biggit (behind the tree in the photo) was fending off a huscarl, whilst my stinggit had successfully distracted the half elf beserker. The luggot and two rabble were facing up to a snow troll, whilst the snaggit was playing hide and seek with a huscarl and elf. Because of the limited visibility the combat came from running in and fatiguing to attack (without charge bonuses). At the end of the round a human was knocked down, having been hit three times by a luggit (with smash - though in retrospect this was a mistake as it wasn’t a charge) but miraculously passed the armour saves! Things were looking pretty balanced, with the goblins having superior numbers on the far potential objective, whilst NA had better numbers on the nearest one.

Turn two saw the visibility improve to 8", and so more combat ensued including an awful roll for my son’s troll charging a (admittedly braced) rabble. The counter charge by the luggit and two rabble group knocked him down and wounded him three times. The human was finished off whilst the thegn started mincing through the rabble (with help from some lightening from the ice queen). The biggit got in trouble with the huscarl getting knocked down but not out, but this allowed the Wiz to zap the huscarl in the back and kill him.

By the end of the round the goblins were in the ascendency on the far side but the NA had the upper hand on the nearside.

To be continued (I’m worried about losing all I’ve written if I don’t publish this bit soon!) 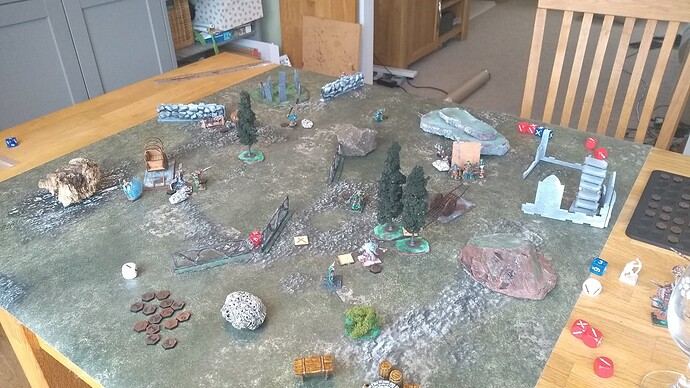 The objective roll was good news for the NA and bad for the goblins, with the nearest objective stone in the photo the result of the roll. The huscarl was nearly on top of it! He managed to pick it up without quite activating the traps (should’ve measured better when placing them!)

The luggits and rabble combined with a knife throwing stinggit to take down the snow troll and head towards the objective., Along with everyone else on the board! My Wiz got embroiled in a fight with a half elf, luckily surviving the initial combat.

The thegn finished off the luggit he was fighting (the rabble with a spear had run across to guard the snaggit) and headed across towards the objective, with the ice Queen wind blasting him along to assist! The aforementioned table with spear survived being shot by the elf and charged the huscarl with the objective (to no great effect!).

The next round turned out to be the final round as the thegn, a luggit and an elf joined the combat with the huscarl with the objective, who promptly broke away and dashed off into the distance. With a long campaign ahead and with no reasonable way to catch the huscarl I conceded the game, with the final board as shown 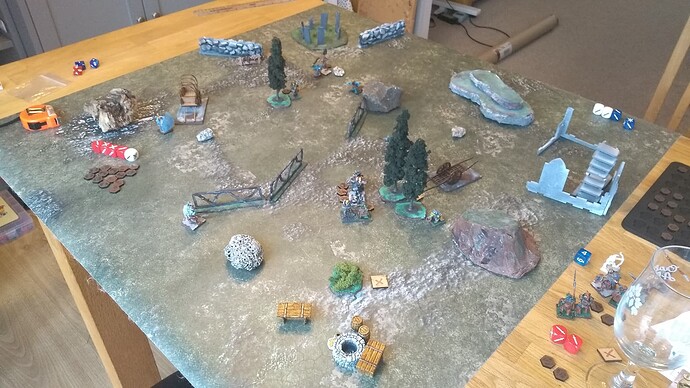