If I were to start a LoR/KoM army, what models are preferable?

What you all sayin for affordable yet cool looking men models? I’m leaning towards LoR but can obviously use them for KoM. Any ideas chaps?

i’ve not seen much i nthe way of 100 years war french or english using Perry figures, but that’s mostly because those players tend to gravitate towards the Brotherhood factions. but i see no reason you couldn’t do it using KoM. might be easier to do the authentic historical style given the limits of the brotherhood factions.

There are so many good historical ranges of models out there that can be used as KoM, its really a case of choosing what era/style you fancy and go from there.

For LotR style, obviously Easterlings & Haradrim work together - the former providing the knights, pikes and footguard (the sword/shield warriors), while Harad give you mounted scouts, bowmen, spears. It’s easier to find models that fit the Haradrim style better - Gripping Beast Arabs as a go-to, plus they have loads of spare heads which you can add to all sorts of other historic models so they fit the vibe.

Gondor & Ronan can do a similar job together. Gripping Beast dark age stuff can tie in with the latter, perry HYW stuff with Gondor.

Fireforge stuff is great - both the cavalry and infantry - and can cover crusader or generic western Europe, plus they do some sweet Russian, Scandinavian & Byzantine models.

Once you have a core of men it is also really easy to diversify into Rhordia, Brothermark, OotGL, Varangur etc.

I’ve got a dark age style Varangur army, with lots of gripping beast, Victrix & warlord hail Caesar models, plus more fantasy esq units; an old GW empire one with warlord landsknecht & perry Agincourt models in quite a fancy, high fantasy vibe; another GW empire based one but with a grittier, HYW style, with Breton stuff, Fireforge etc; an Eastern/Arab style one with lots if gripping beast models, camel riders and pretty much anything I can stick a turban on!

The Wargamer curse! Always more projects in the mind than finished.

That said, having two armies finished is already an achievement! Contgrats! (If ever my armies were finished…)

That said, if I were to start anew, I wouldn’t chose GW Empire models, but probably fireforge (the fantasy version) or Perry Twins (if more historical themed). The Perry historicals are a great starter for any KoM force, clean plastic, very affordable and they have models from the dark age to napoleonic era.

Just as I think of it, I would love to build a combination of War of the Roses infantry with Napoleonic melee cavalry. I’m a sucker for 19th century army fashion, so what better excuse to include those? I’d write a background for the army. It would hail from a feudal state in which the nobility has access to fashion, horses and (primitive) firearms, while the commoners are delegated to menial duties and renaissance-era military gear.

I mean, these are great models and 14 horses for € 25 is a great deal! This box set is the start of many an army too.

Thank you all for your comments and suggestions. Very helpful! I’ll start looking into these different models.

On the LotR front, also seen Uruk-hai used as a KoM list, with lots of pikes & berserkers!

I went with Fireforges Mongolians for my Kingdom of Men for many reasons, I like their history, it is a refreshing change to the all to common Medieval Europe, and the plastic kits are great. The Mongolian infantry box can build quite a few different types of infantry, using bits from other kits. So far I have got spearman, Pikemen, Archers, Shieldwall, Crossbowmen, and Pole Arms, plus war machine crew.

If I were starting again and money were not an issue I would be tempted by the Easterlings range, truth be told I already am very tempted to add some as heavy Mongolian infantry.

As others have said, the market is flush with great plastic historical kits to base a Kingdom of Men force on.

Loving this thread. KoM is on my radar later this year.

Was thinking Perry Agincourt range as a base. Love Perry stuff since I used their American War of Independence range a few years ago.

The choice in historical plastic kits is amazing - without even touching the metal ranges.

The Perry stuff is great 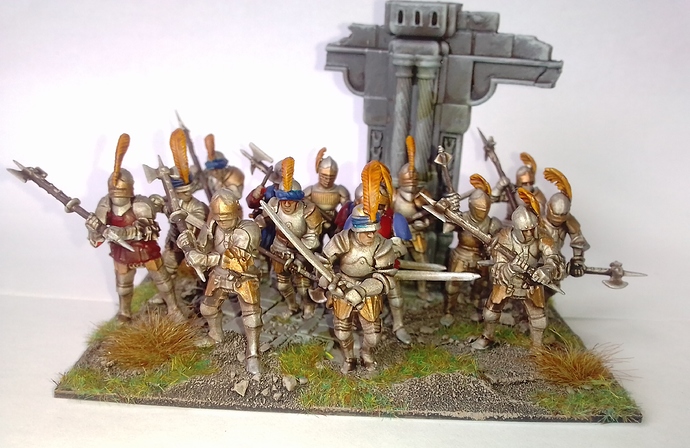