Some went back to the shires. Some had other ideas. One muster captain had aspirations of Glory.

Denouncing the ruling shire council as corrupt, and assuming the name and title General Armagnac (after a particularly rowdy evening drinking with a travelling band of brothermark knights) he led a group of trained bands with similar feelings south.

Having eventually made their way to as far south as they could, eventually arriving in the environs of the southern Dragons Teeth Mountains, edging into the Successor Kingdoms. The crossing of the peaks was perilous, and if not for the help of a enclave of dwarves the column would have surely perished or been waylaid.

Here at the base of the mountains Armagnac would establish his own version of a guardburg with an attached settlement. He named this new settlement Colombard, and with his wit and charisma persuaded his troops and their families to elect him as “High Chancellor” of the newly formed settlement council.

Armagnac, impressed with the gunpowder weaponry of the dwarves who had assisted him in the mountains, resolved to modernize the military forces available to his fledgling settlement.

Soon, a large proportion of the trained bands were equipped with halfling-forged muskets, and trade with surrounding human settlements made further improvements possible.

The trained bands were organized into larger structures, and cavalry formations attached to provide support. Uniform colors were introduced so the army could be better directed in combat. Armagnac even introduced new headgear, intentionally differentiating his forces from other halfling armies.

All of these preparations would be needed, for soon war would come to Colombard.

This first unit Is WIP. Touch ups will occur. 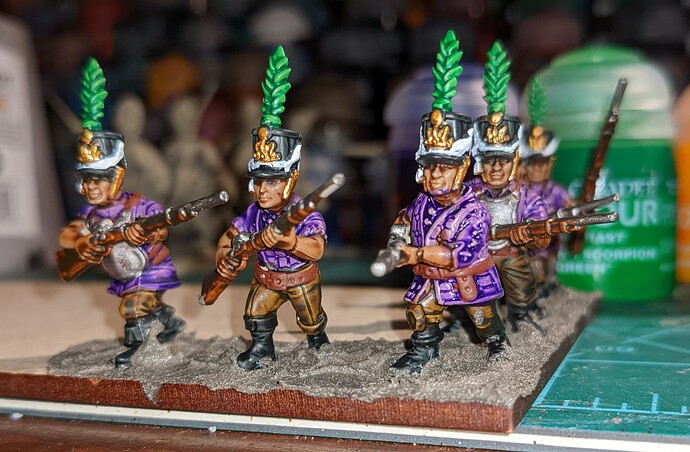 They’re 1/72 Napoleonics? If so, that is impressive detail painting!

Ahhhh, I see! A very inspired conversion, in that case!

Thank you very much.

They are outstanding. The hats really are amazing on halflings.

I’m glad you like them. I have plenty more conversions and headswaps planned

Very nice! I actually did a few of this same headswap myself, it works remarkably well.

Do you have any excess heads that you are not using? I’m going to use more of the shako heads that I have at present and will trade.

I might have a few, I’ll have to do some digging.

A greenskin invasion soon broke, the orcs cascading down from hidden mountain Lairs to attack Colombard.

The defences held, and the halflings use of massed gunpowder drove off the horde. Armagnac, however, saw plainly that he needed an edge.

A regiment of volunteers was formed into the Legion D’Outremer, to go south across the infant sea and bring back technical marvel’s from the halfling settlement of Ej.

While the main army of colombard primarily composed of infantry armed with halfling muskets, the dangers of the road and of ship combat meant that the legion had to be outfitted for combat in close quarters.

While the legion still maintains some black powder troops (aralez mounted scouts), the majority of its members wield melee weapons.

To lead the expedition to Ej, Armagnac promoted sergeant Henri Peloursin to muster-captain and as Marshall of the Legion.

Armagnac also had a totem of an iron eagle created to act as a rallying point for the troops. This is carried by Sergeant Beaunoir. 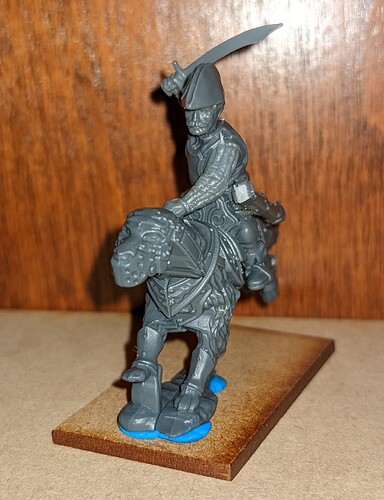 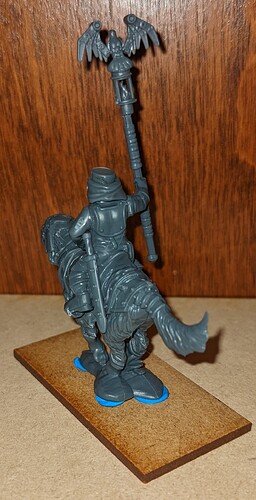 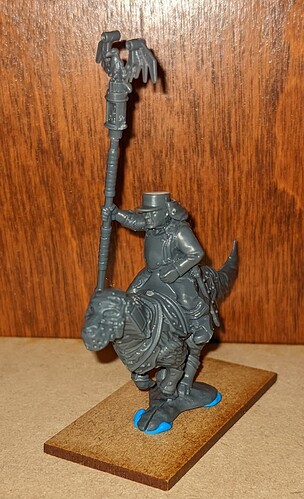 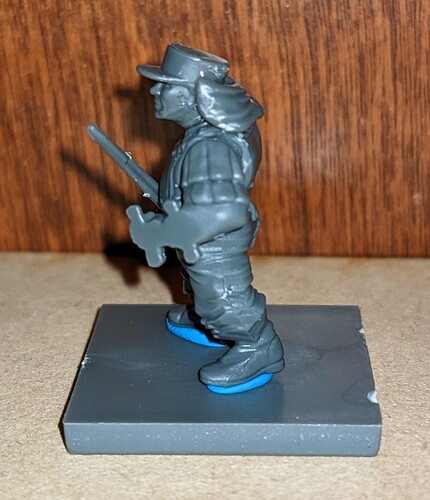 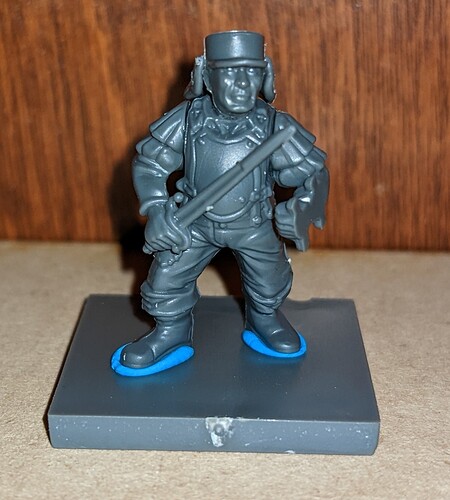 I’ve also done up a Sauceror, and although he’s not theme- fitting I can make an exception. 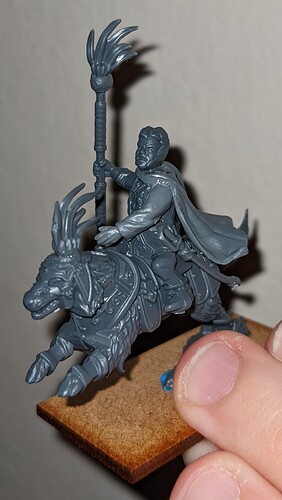 Fresh from the conversion desk, but not finished in the slightest, a themed Ej Grenadiers to go along with my force. 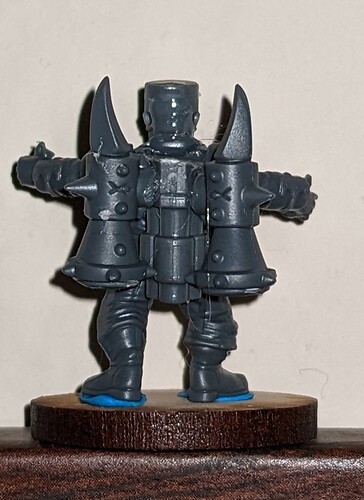 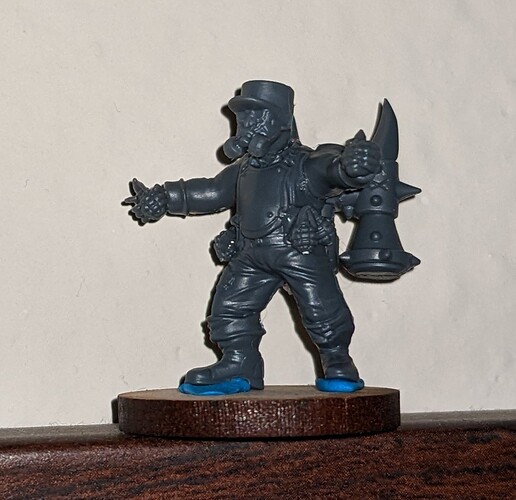 Up to 10 painted halfling muskets 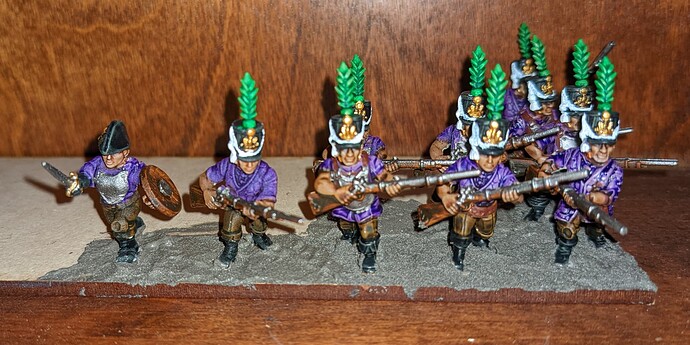 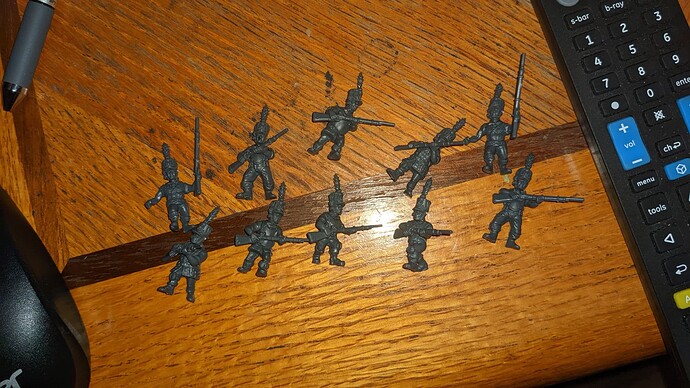 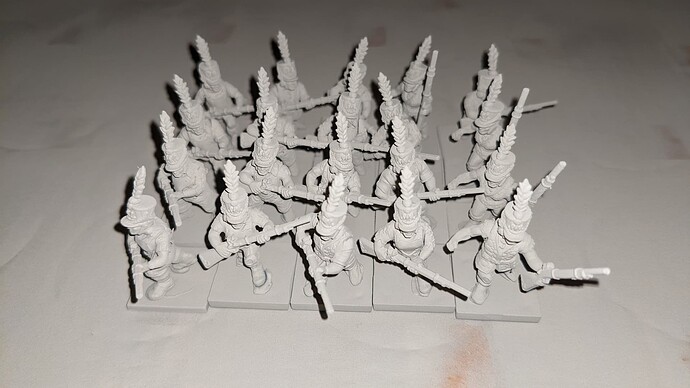 What does everyone think of the project so far?

I’m starting a halfing force next month so great inspiration.

Progress is going to be slow as I have a few commissions on the desk at the moment. But I try to work on personal projects too.