In need of skulls

I’m looking for skulls to decorate the bases of my Nightstalkers and was wondering if anyone knows of any good sources? I live in the UK and so far the Games Workshop box’o’skulls appears to be the best option. A variety of about 360 skulls in fact.

I’ve had a look through none wargaming craft resources, but most are too big, while other suppliers offer resin in smaller quantities.

Any experience in collecting skulls would be appreciated.

Just buy a random GW mini. Enough skulls on it to decorate the whole army!

Sorry, had to do it. 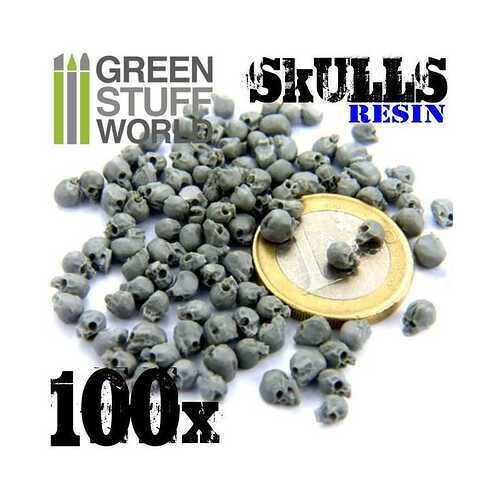 They have Orc skulls as well, probably other races too.

Tip, paint them on the sprue.

I generally avoid GW products, but I still use their skulls.

The half of a box of skulls I got have lasted me from before I started avoiding GW though.

Its annoying that the majority of them are attached to the sprue on the top of the skull - the GSW ones underneath.

Warlord erehwon skeletons are a great source of bone parts (f*cking pita to put together normally though!)

I’ve seen the GSW skulls and the only negative was resin, though to be fair, this is a minor drawback. As for the GW selection, I was planning on removing the sprue from the scalp, leaving the jaw still attached for painting, and carefully removing afterwards.

Just paint on sprue. When you be detach just cover place where attached to sprue with a little bone colour paint.

They look amazing when completed all the same.

I love mine. Two hordes worth just looks so cool no matter the paint job. Probably the best skeletons on the market in my opinion.

You will super glue your fingers together getting them built though.