So today, on Croatian Independence Day, two military geniuses clashed over couple of battles of KoW. Perhaps military geniuses is overstatement, but there were some military brilliance. And lack of real knowledge of rules and armies. And I guess it would be a crime not to share it to the world

First battle was 1500pts - Northern Alliance vs Orks. NA had horde and two regiments of human clansmen, regiment of half elf berserkers, regiment of snow trolls, snow troll prime, hrimm, clarion and regiment of ice niads and orks had four regiments of ax, troop of chariots, troop of moreaxe, two giants, godspeaker and krudger. Mission was no 12., I believe it is called salted earth. No one understood what was the point of the scenario so tokens were all over the place and deployment was …er, all over the place too. Initial combat saw hrimm eliminating chariots in single combat.

In sixth turn, NA had two regiments of clansmen and clarion vs krudger, godspeaker and ax regiment and score was 2:1 in tokens for NA. Of course, we had seventh turn which saw demise of krudger in close combat and one of clansmen regiment destroyed by godspeaker’s fireballs, bringing result to 1:1 and draw. Fun fact: NA used viking miniatures and orks were GW minis. 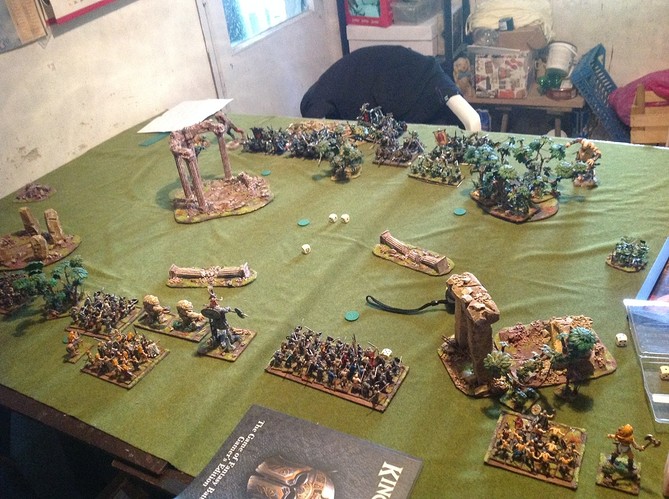 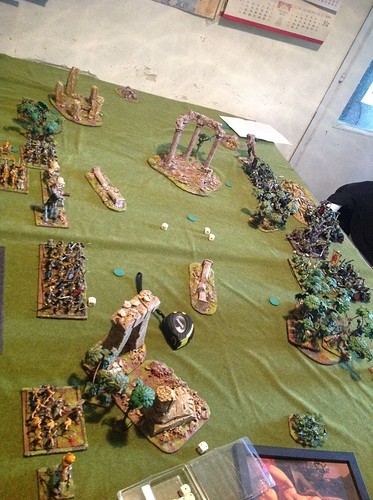 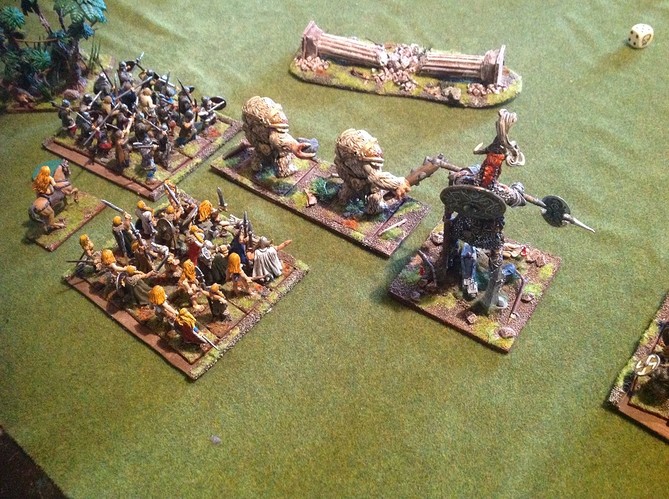 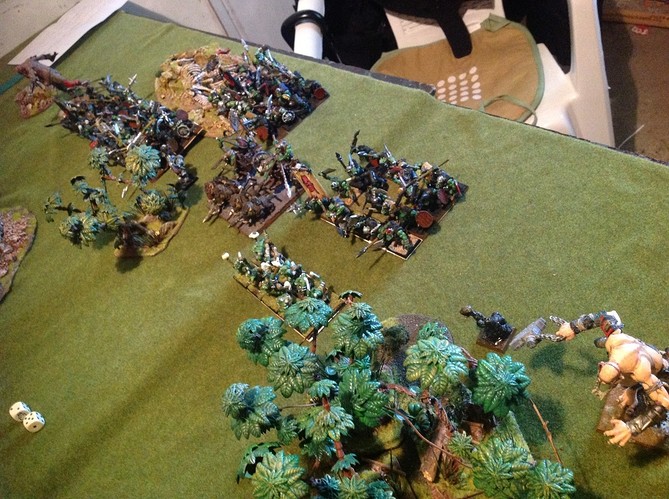 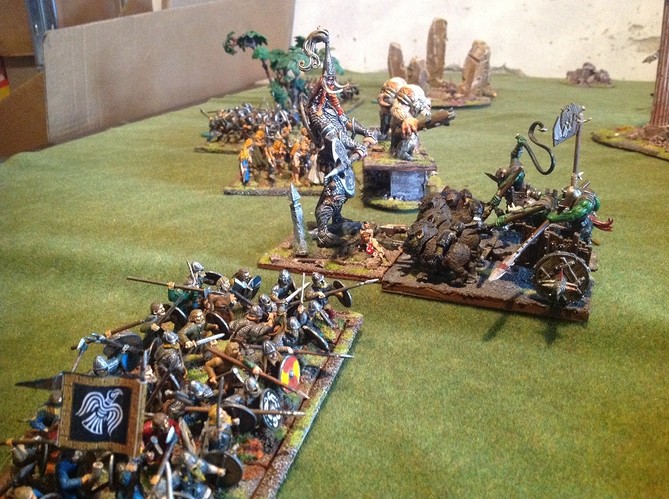 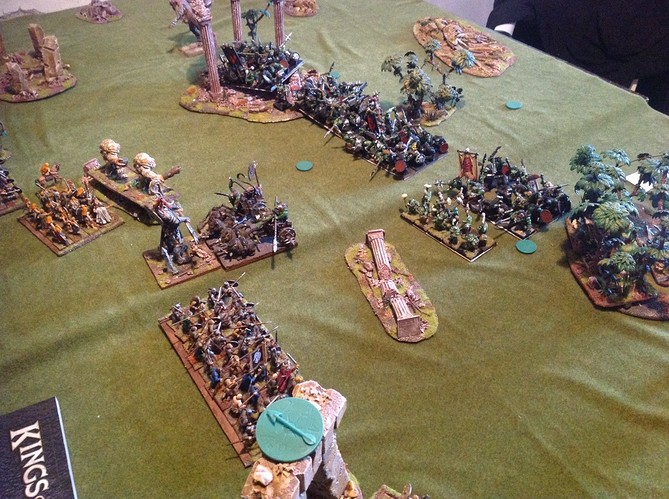 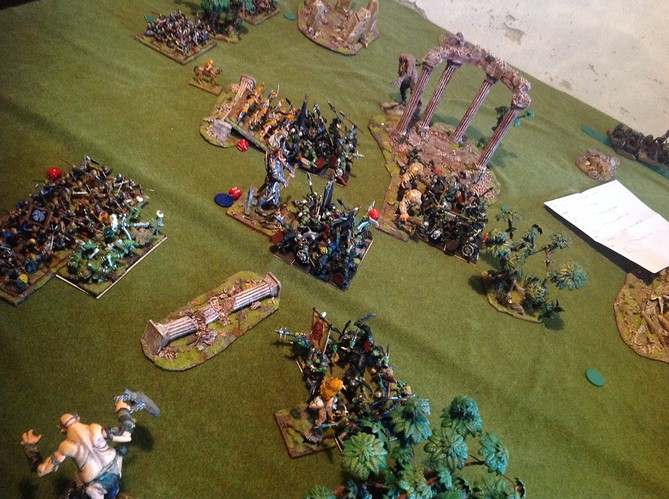 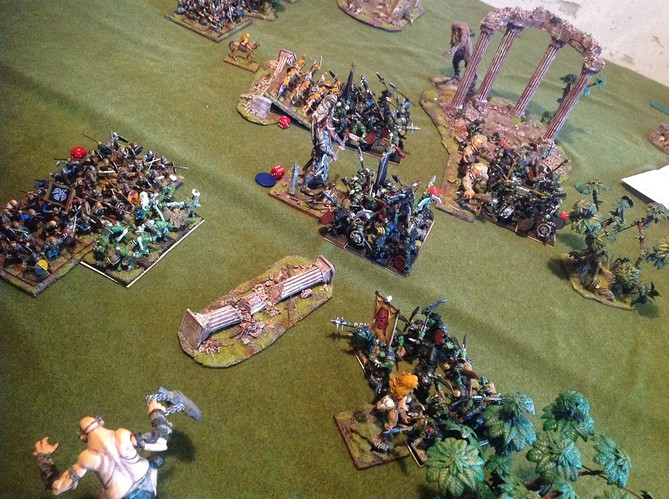 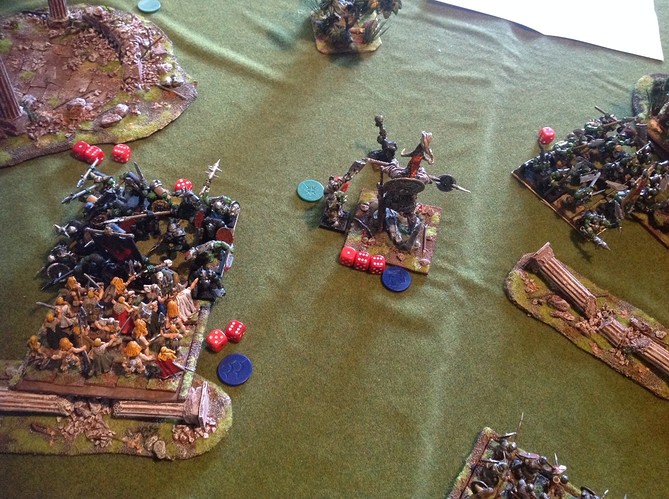 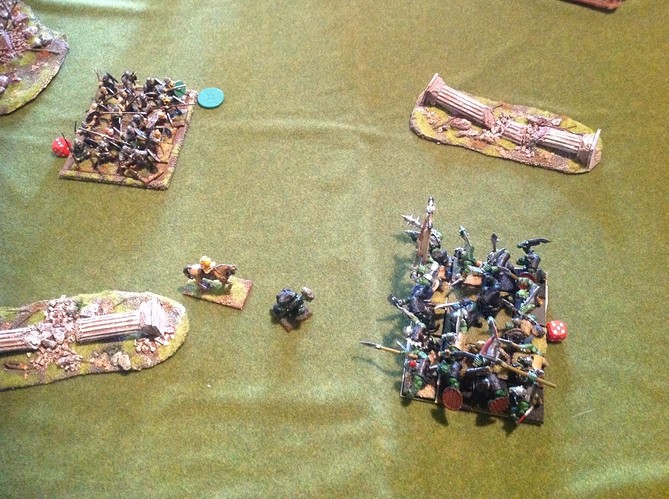 Scenario was pillage and again objectives were distributed without rythm or rime and deployment was in similar fashion. First turn was mostly moving forward with couple of wounds from goblin shooting. Second turn saw giant hit the butcher regiment, one mawbeast pack hit scarecrow, fleabag regiment hit shadowhound regiment and mincer hit needlefang horde. After that, everything went downhill for goblins.

One mawbeas pack was destroyed by riftweavers, other by terror. Giant stuck at butchers, only to be flanked by riftweavers and terror and eventually destroyed. One fleabag riders were destroyed by butcher horde, other was later destroyed by fleshreaper and needlefangs who previously destroyed miner. Fiends managed to get to goblin line unscratched and destroyed regiment of spitters. Other spitter regiment was hit by scarecrows and eventually also destroyed. Third regiment was charged by butcher regiment and routed in single combat. Winggit flew behind Nightstalker line, done some shooting, charged dopplegangers in back and got destroyed in two turns of combat.

Trolls manged to destroy fiends, but phantoms and butcher horde destroyed rabble. At start of fifth turn, horde of butchers and phantoms crushed horde of trolls and terror, riftweavers and reapers destroyed sharpstickers and all that left were goblin king, one trombone and one sharpstick thrower and I concede. Fun fact: almost all of armies were Mantic, two sharpstick throwers and fiends were scratch built, with mostly Mantic bits and needlefangs are Haloween decoration. 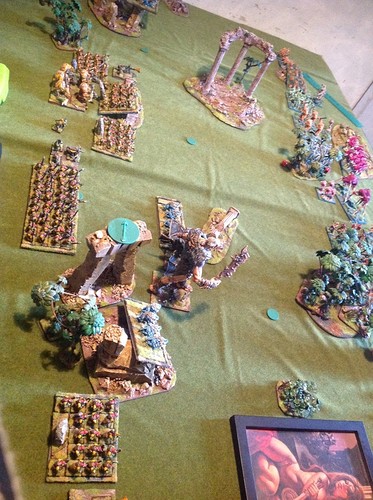 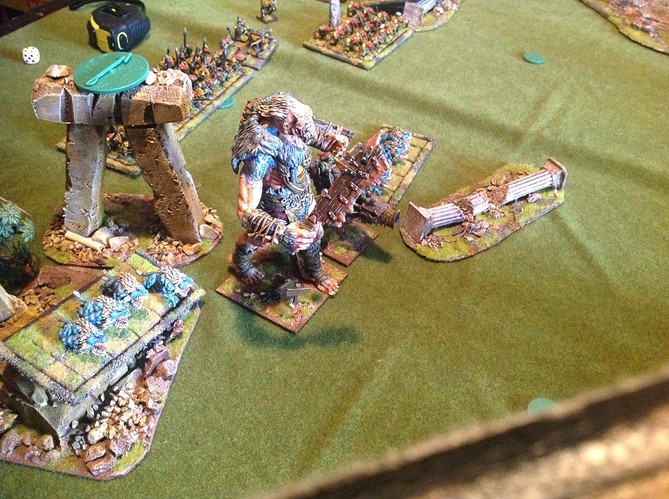 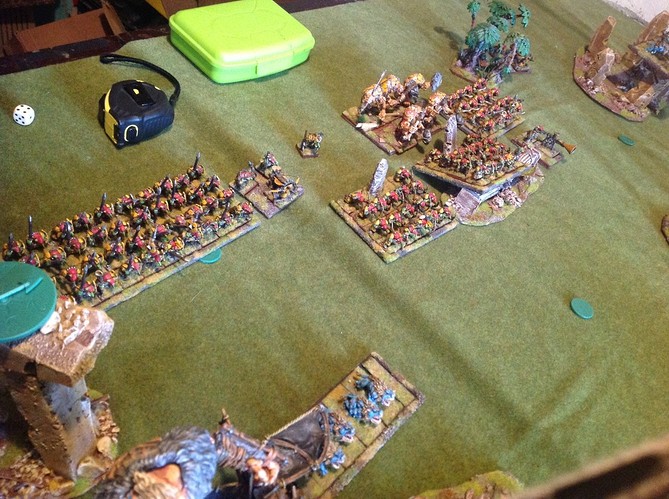 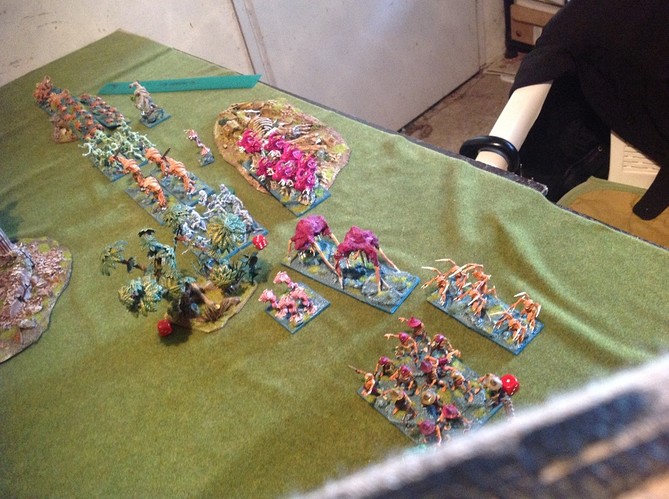 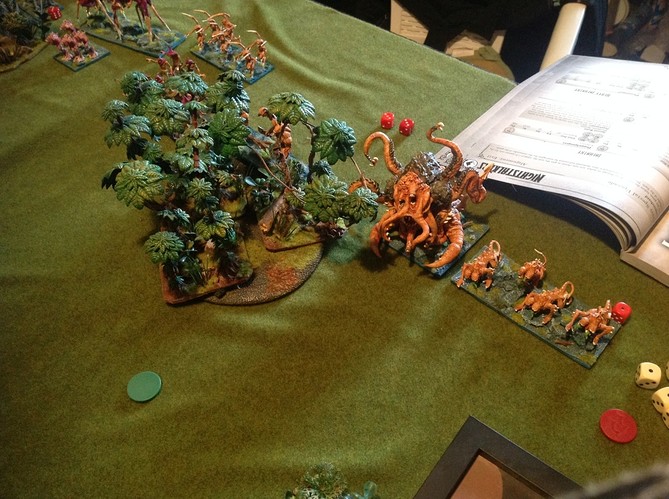 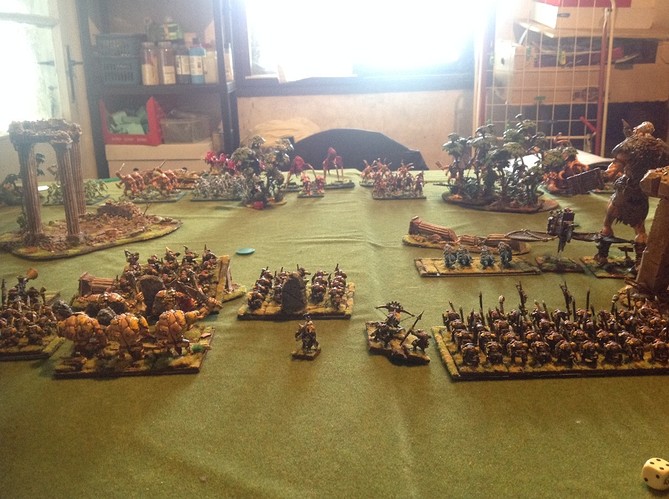 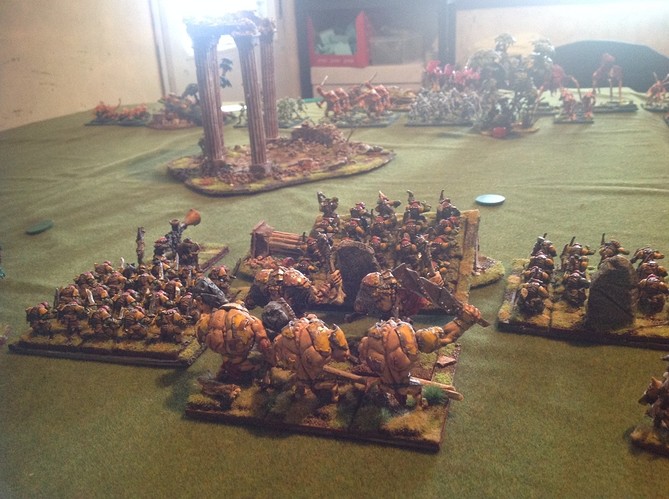 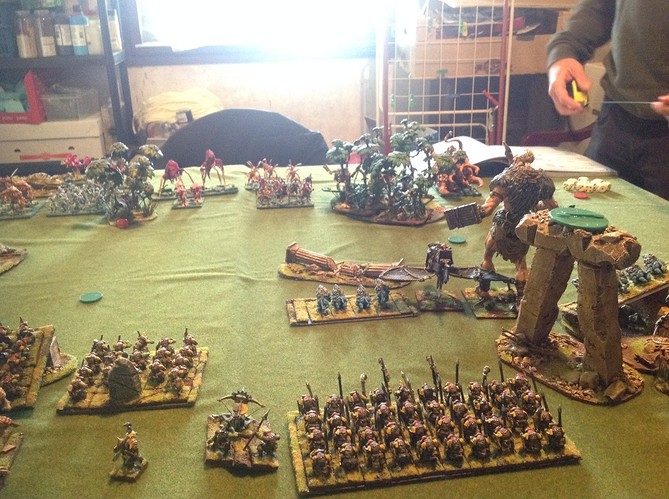 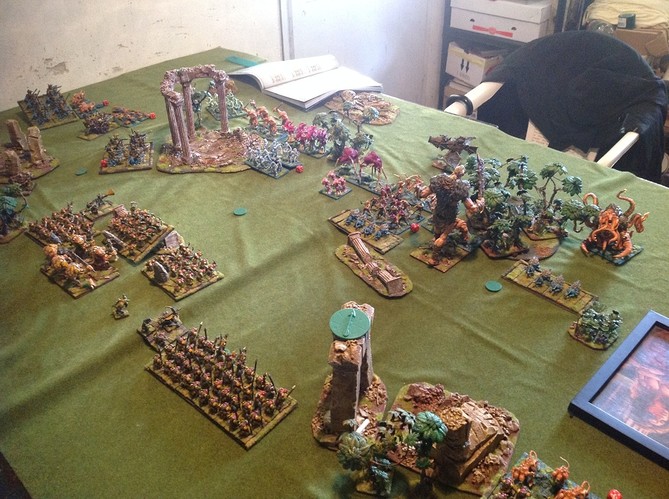 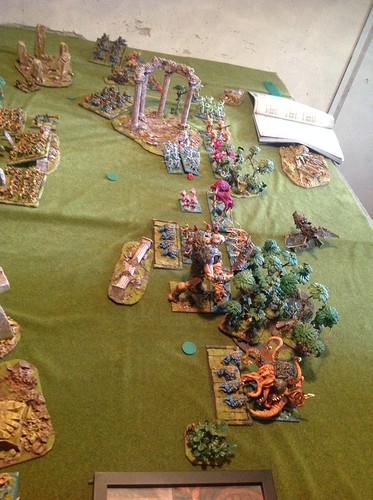 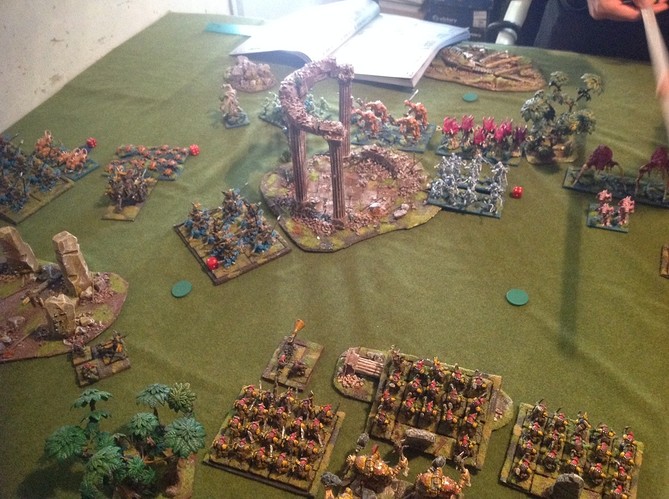 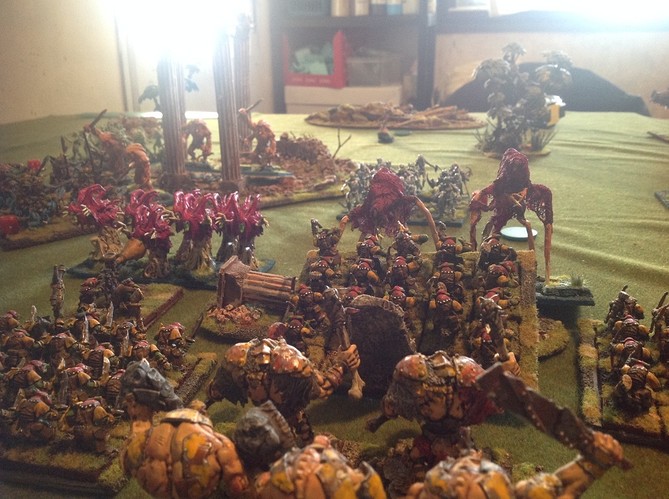 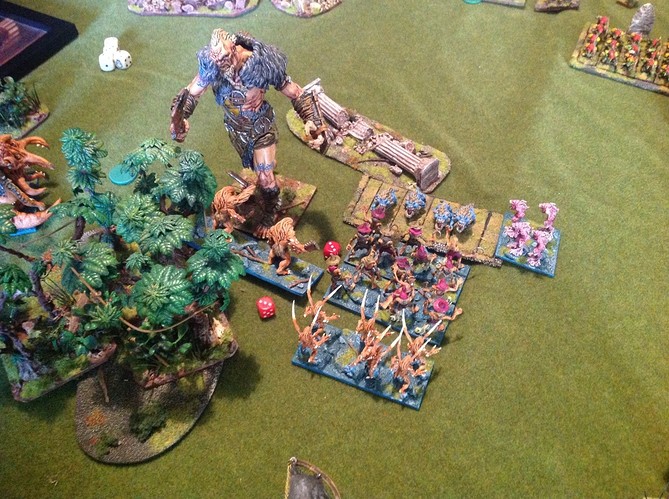 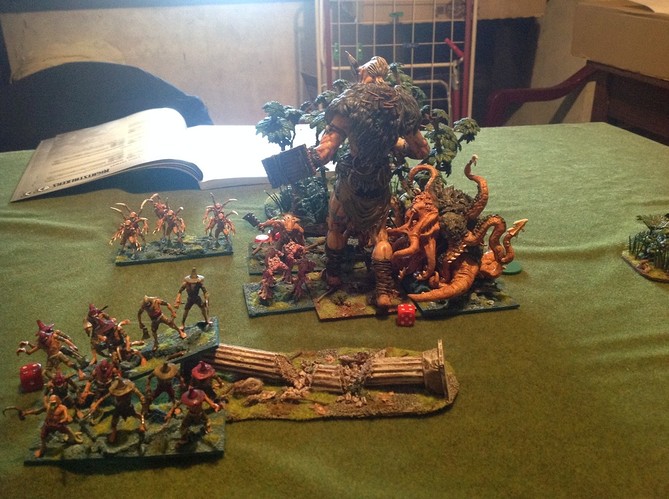 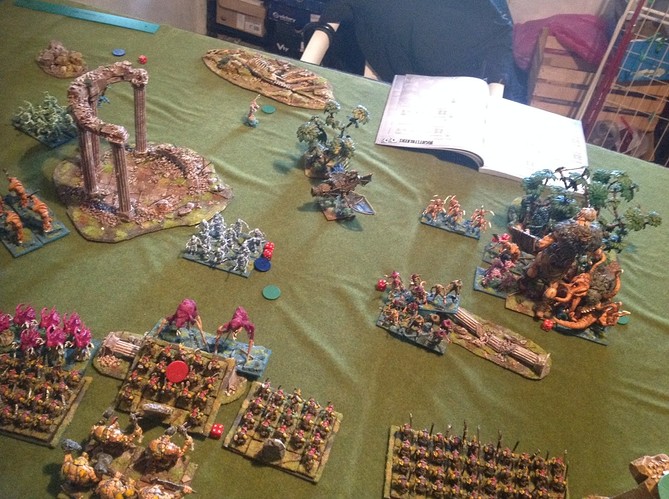 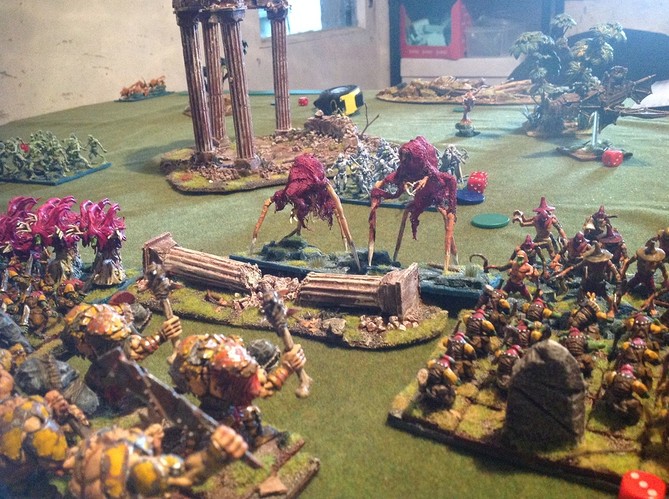 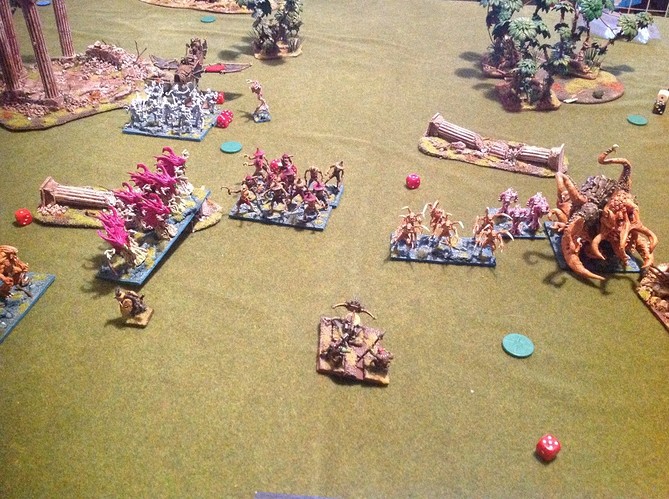 Well I guess there was not much military brilliance in the end and half the rules were misinterpreted, but we still had fun and more importantly, we can’t wait to play more!

great to see a battle report and with two fantastic looking armies as well. I’m incredibly jealous and can’t wait for the next one

Yes, fun reports and truly impressive looking forces. I enjoyed the writing! I enjoy written reports in general, so it’s good to see more of them.