I’ve returned to the hobby from a hiatus, and am quickly building an undead force, mostly as opponents for my dwarfs, but with more of a focus on getting them done quickly. I’m using a few bits I had already, and other cheap and cheerful bits as I find them.

these were the first thing I painted, a while back now- GW ME SBG Morgul Knights as Soul Reaver Cav. An often used proxy, and they scale well with the Mantic range. 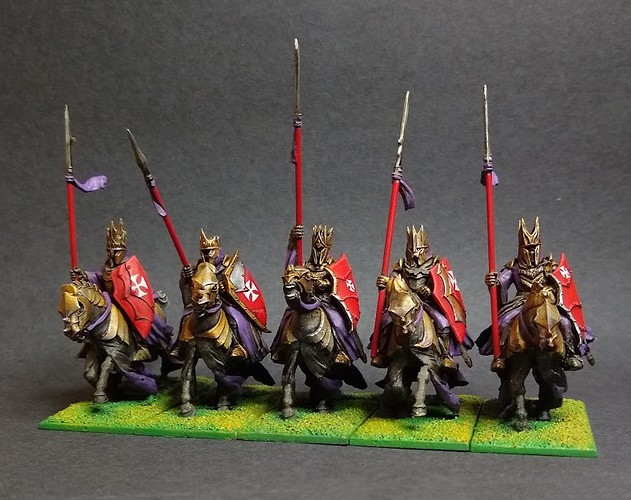 Other bits from the last few weeks, including cheap halloween spiders as Deathpack, and some ancient bits of Citadel metal.

And here are some of the TTCombat werewolves. They’re £20 for 6, but after browsing them on eBay, I got an offer of £18, and then there were actually 7 in the box!

Impressions- very hard, glossy resin. Quite a lot of cleanup required, not all of it trivial. I’m personally happy with the level of finish I’ve achieved for this project, but if you’re more of a showcase painter, I think you’d be disappointed in some of the holes and nibbles you’ll need to repair after removing keys and vents etc.

I gave the resin a thorough cleanup with detergent as the resin was so shiny. Paint stuck fine and doesn’t seem to be flaking, but I’ve applied tons of varnish just in case.

Assembly was easy- three of the wolves were one piece, the others had separate arms. Obviously this will be a pro to some and a con to others who value more poseability. There are three sculpts, but two are very similar.

Foe the price, I’m happy with these, but they’re not the best on the market.

All very nice, I particularly liked the marauder vampire with the added bat wings, very effective.

Wow, coming along nicely! I really like your style of painting. It has a cheerfully colourful retro quality that really stands out.

Keep up the good work