Edit as of June:
This army has been built by now, but needs some serious alterations. Please see the posts at the bottom of this thread for the current iteration of the army.

As some of you know, I own a sizeable Kingdoms of Men (former WHFB Empire) army. It consists of quite a lot of infantry ,cavalry (until recently a brotherhood force) and war machines

As Kingdoms of Men haven’t been releaved yet AND I like the feel of the new basileans (turning away from angels and phoenixes towards infantry) I am tempted to try this army, at least for stats.

These guys (former greatswords) make great paladin footguard and I own 4 troops of these. 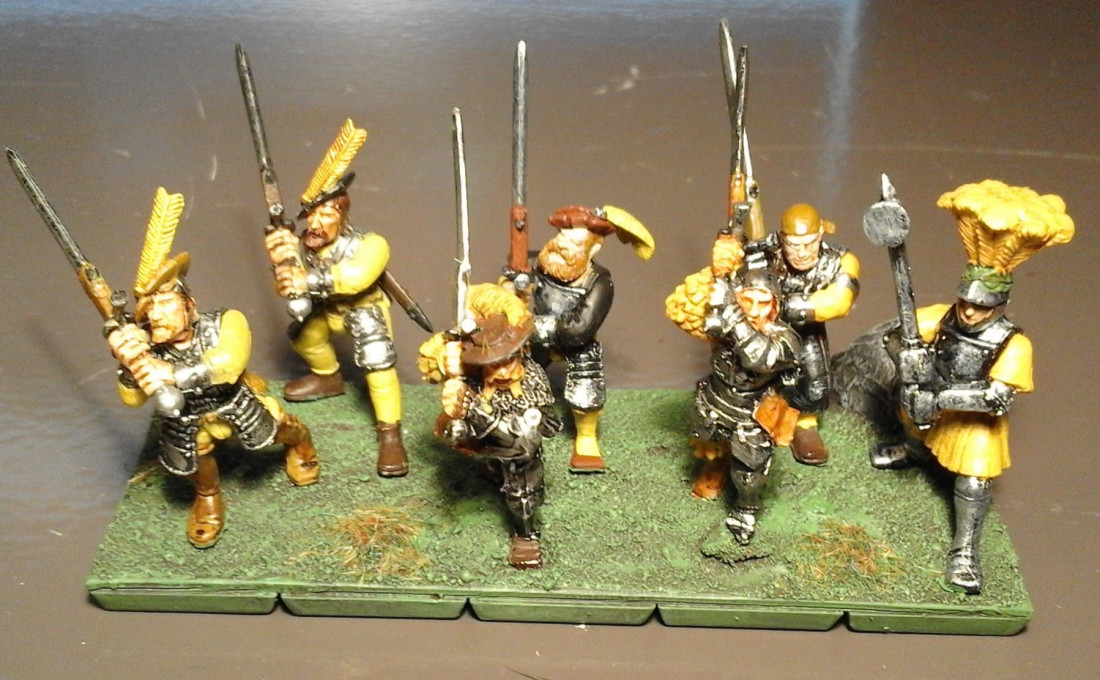 Other than that, I own enough models to have at least a horde of all infantry (save sisterhood scouts) of all kinds and I can build a regiment of elohi (have some Mantic ones laying around) plus a horde of palace guard. (old GW DoW ogres). My light cavalry can double as panther lancers.

Giving these limitations, how would you build a 2k force?

I have tried to build a list myself: (Courtesy of goodarmylists.com)and I realy would like some feeback on it.

The idea is to build a grindy army which centers on the 3 regiments of paladins-on-foot and a horde of spearmen to hold off the enemy army while the lancers, phoenix and palace guard deal the necesary damage supported by double bane chant.

I included two troops of gur panthers as chaff. The two mages have lightning bolts, together with the arbalest they have to deal with the opposing chaff so my paladin regiments don’t face double alpha charges. 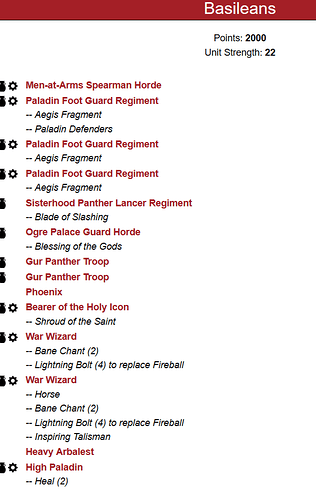 Some more thoughts on (the modelling side) of this army can be found on my blog.

A few thoughts for you

Thanks for the reply. Really appreciate it!

In reply to your thoughts:

They really look wonderful. The cost (€ 80 for a horde) is quite steep though and I’m not willing to shell down that amount of money for an army that I may be or may not be using for much of this edition.

Fortunately I own a regiment of 5 “old” GW dogs of war ogres that can stand in until (and if) I’m going to buy these models. This is the horde included in the army above.

Fully agree on Gur Panthers as chaff. that’s why I included 2 troops of them. Still looking for models to represent them, as Mantic does not sell them in regiment boxes and will not do so for the time being. I’m looking at some kind of war hounds as replacement.

Panther lancers: I’m not sure If I agree. very fast/nimble TC 1 cavalry might be very valuable in this edition as they project threat beyond many fast units (i.e. fliers) and their nimbleness allows them to outflank enemies to deal with war machines and/or objectives in the deployment area.

I’m at least going to try this out. My gut feeling is that fast/nimble cavalry is going to be good.

as I’m looking for two sources of bane chant/inspiring in addition to some lightning bolts, there might be some effictiveness switching out one or or two of the individuals for priests. The high paladin was chosen for the synergy with paladin defender; but if this is truely value for money remains to be seen.

the scouts seem quite expensive, but may be more valueable than the arbalest due to unit strength. I might have to try out this build. I do want some shooting to remove enemy chaff. My chaff is only the two regiments of gurs, which should be enough if I can deal with enemy chaff by shooting it. That’s why I need at least some lighting and/or an arbalist. I could also try the sisterhood scouts indeed. (using human archers as models, I do have some laying around)

As I don’t have Elohi, this is more or less off the table as of now. If I want fliers, I might use the paladin on elder dragon instead.

Ãnyhow, thanks your your reply! food for thoughts.

I shelled out for a regiment of OPGs and have one from Vanguard so will be going with 4 plus terrain for my first horde. I managed to get some GW Stormcasts off a bring&buy recently (£5 for 5 figs) and will use them for the 2nd horde when I take it.

I think I will persist with Scouts for now as they seem more useful than the Crossbows. I do have some warmachines on order though so would like to test drive those

I’ve considered your feedback and changed my army list somewhat. In particulary your advice to look at the priest as an alternative to the war wizard. This way I could reduce my 4 individuals to 3, so I created some more points for a mounted fighter, a dude that’s been in my army for quite some time.

Maybe 4 individuals is too much, but then again, they are quite cheap.

You also advice me to include scouts over the heavy arbalest. I do agree the scouts are a better option, but switching the 85 points arbalest for 120 points scouts means losing the veteran commander for my horde and the horse from my banner bearer. I think I want to keep it as it’s now and we’ll see later. 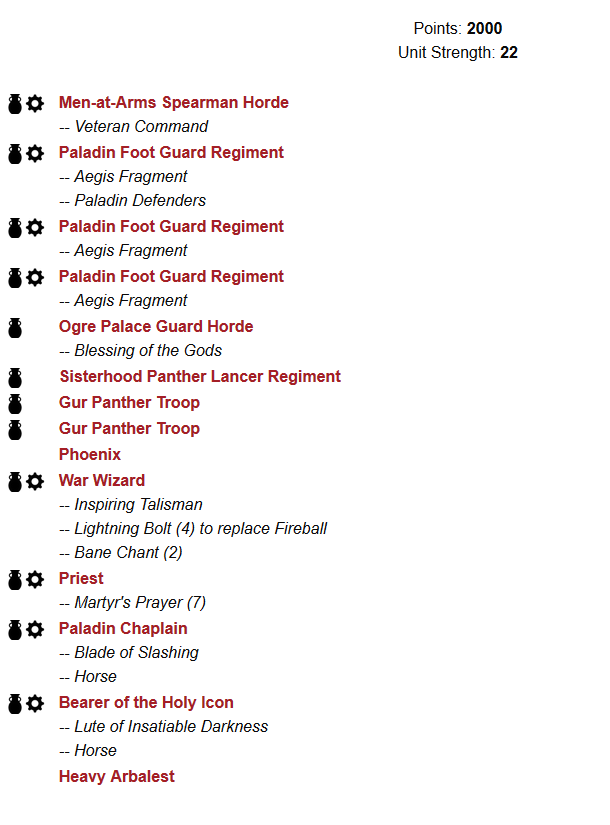 I’ve not really tried the Chaplin yet. If you want 3 inspiring and a flighty hero could you combine the Chaplin and Banner bearer into a High Paladin and Squeeze out another item? I’m currently running Sami instead of the Phoenix for the additional inspiring it gives. That means you could possibly remove the banner guy?

As I’ve had ample time to build all required parts of this army, I did so and they are nearly all completed. A few battlefield tests required some changes though:

This is the current version of the army list: 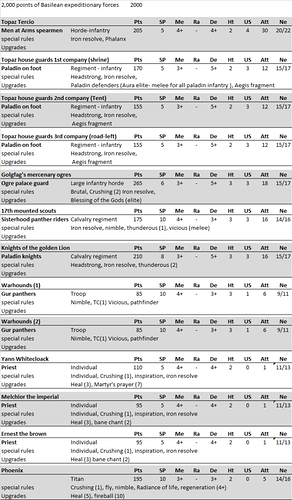 I’m at least going to try this out. My gut feeling is that fast/nimble cavalry is going to be good.

They are, bur only if you use the speed.
To delay enemies by moving to threaten their flank repeatedly or get them in danger but threatening a flank with the nimble unit and the front with something else.

A few thoughts for you. I play a pretty similar list but usually at higher points so I have more options.

(…)I play a pretty similar list but usually at higher points so I have more options.

Sad but true. I like the phoenix model so much though! That said, I’m painting up an ur-elohim for this purpose.

Maybe drop the spearmen for this purpose? This would give me 210 points to play with, which is more or less another hammer. (paladin knights or nearly OPG)

I’m going to ignore this one as these 3 have performed incredible well for me. I just have to hide them behind the lines instead of keeping them in front, as they can grab objectives and/or threaten units.

Maybe I have to switch out the magical items throughout the list a bit. Elite on the OPG is brilliant (you should see the look on the face of my regular elven opponent when I also hit on 3s/elite and wound on 2’s) but it’s quite expensive. Pathfinder on the knights would help a lot.

thanks a lot for the tips!

That’s 2005 points leaving you the option to add another unit or two with items. Maybe some spearmen, maybe some knights, maybe some more ogres or some scouts for shooting.

The difference is quite remarkable!

For the Phoenix’ 2 more attacks and regeneration, Samacris gains a smaller base size, piercing on fireballs, 2 points (!) of defense, iron resolve AND (best of all!) inspiring. For a support piece (which the phoenix essentially is) this is really good.

Sad, though, that the beautiful model that the phoenix is, gets replaced by by a flappy guy…

I hope they give Big Bird Inspiring in the next COK - that’s what it really lacks. I only really use it if I do a flying wing of Elohi