Kingdoms of Men in 3rd. What is working for you? Tactics, lists, battles?

i’ve been working on a roman inspired force. lots of footguard and ballista’s, with some Auxilary cavalry. since i haven’t assembled anything just yet i’m still working on lists and what to take.

Cool. Solid core there that can be expanded as needed. Keep is posted on how it goes.

More or less done with the fantasy themed Scandinavian 13th century army I have been working on, but I might have to add another horde of pikes as I can no longer ally in pegasus knights. At any rate, my 2000p force is currently this:

I am a bit worried that I have too much chaff, and that my center is a bit weak with only one pike horde, and I also kinda want to add two troops of the new frost wolves from Mantic as mounted sergeants (though they are very expensive) , but it will have to wait for now as I have two other human armies to get started on…

How are bow troops working for you?

Sadly I haven’t played any 3rd yet, so I don’t really know.

I live in Trondheim at the moment, and only know of two other KoW players up here. The wargaming community is incredibly fractured.

Understandable. I’m too busy with school & work to get any games in. Still in the planning, building, painting stages.

I have a bunch of Hoplites that I am thinking about converting. Do you think I could call them pikes without too much fuss?

I miss the 2e historicals, that book gave Kingdoms of Men armies a ton of options. I have a bunch of Greek mythology stuff that really doesn’t fit a list. Hopefully we will see i historicals again in 3e at some point.

I don’t think its a problem for friendly games.
For real pikes in Ancients, there are always these. 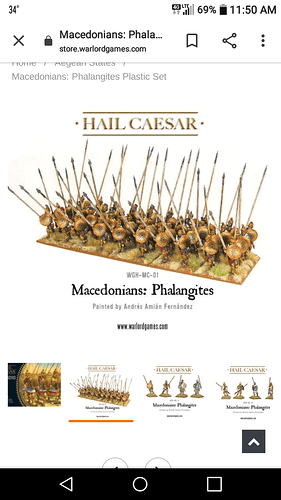 I have a bunch of Greek mythology stuff that really doesn’t fit a list.

Nature allies ftw? Seems like fertile ground for myth stuff in there.

Yeah, those phalangites are cool. I am not looking to paint anything new, at least not for this army. I am more trying to find ways to rebase some old figures so I can get more armies

I have a plan to grow the game in my local community, but I really need to have multiple armies available to get the ball rolling.

Nature as allies for greek myth… maybe? They have centaurs. Unicorn could work but it is thematic stretch? A minotaur could be a beast of nature, maybe? No place for the harpies or Medusa in either list though. Men do have a giant (cyclops or titan) and a mammoth (bras bull, gorgon). Hmmm…

Man, any recommendation on this would be great as this is my wife’s army. Maybe I should start a new thread?

The historical hop!ight spear, or Doru, was easily long enough to qualify as a pike, especially when you factor in the sauroter spike on the back end was meant to allow it to be anchored in the ground for anti-cavalry defense. The basic tactics of the phalanx are fairly close to that of the pike as well.
(Also worth noting that ‘phalangite’ was derived from the plural of ‘phalanx’, phalangites were basically the Macedonian terminology for hoplite type units, though the Macedonian ones were a bit more evolved (using somewhat longer spears and lighter armor to get the battlefield effect of the earlier period armored hoplites without quite as much expense)

@MithrilCoyote Yeah, I got into minis as a historical gamer (and I happen to be a history professor) so I appreciate the historical argument. You could say that the sarissa and Macidonian phalagite put an end to the traditional hoplite, but I think it was more of an evolutionary rather than an revolutionary change, and if anybody deserves credit for the transition it is probably Iphicrates (his reforms demonstrate the gradual transition to longer spears, smaller shields and lighter armor). Philip, or even Alex is often given credit.

Anyway, I was more concerned with KoW players saying “'thats not a pike,” and just making sure that it is acceptable modeling. I agree with you overall though. Hoplites should be really tough to hurt and the ensnare rule that pike get is spot on for them (as defensive troops sporting a wall of shields, all phalanx and shield wall units should really be def 5+ IMO, but that’s neither here nor there). I guess the question might be where do we draw the line between a spear and a pike in fantasy world? And for Kingdoms of Men at least, historical guidelines might be as good as any.
Cheers

Doesn’t affect my army but…
No Hero on Chariot? Odd.
Other armies with Chariot units get a Hero option on Chariot.
Basilea, Elves, Ogres, Dust, Goblins, Orcs , Herd and even Abyssal Dwarves…it makes no sense.

might just have been something dropped for space. or perhaps since the KoM list already had a Pegasus as the special non-horse hero option, they decided not to give chariots to the general.

perhaps we’ll see a theme list with that option… perhaps Valentica? they have a lot of open country, going by the map, so i could see them keeping chariots around more than say, Sathoi. (to name the two places that got the most description so far of the many KoM). (i suspect that a Sathoi theme list would include more non-human units like Ogres, given it is described as being the hub for mercenaries in pannithor. perhaps with a few small but elite human units as well… could see Def 5 Pikes for example [pikemen in platearmor])

now question for you regarding my army development progress… what do you guys think of Fanatics in 3rd? are they worth taking, and if so are the smaller units (troop and regiment size) good?

Yeah, agree with this. It wouldn’t be really powerful and add that little extra (esp for some historical themed armies)

I think Fanatics look good, but have not used them. I’ve seen them in other lists. I’d lean towards regiments or hordes rather than troops though.
Nerve -/11 with De3 is a bit fragile. The Me3 and CS1 is nice as KoM needs some punch. Bit of a glass cannon though.
My theme revolves more along the lines of Polearms & Footguard with 2-handed weapons.