Kingdoms of Men in 3rd. What is working for you? Tactics, lists, battles?

I think Fanatics look good, but have not used them. I’ve seen them in other lists. I’d lean towards regiments or hordes rather than troops though.
Nerve -/11 with De3 is a bit fragile. The Me3 and CS1 is nice as KoM needs some punch. Bit of a glass cannon though.
My theme revolves more along the lines of Polearms & Footguard with 2-handed weapons.

I ran a reg of berserkers in v2 as a counter punching unit behind my main line. Worked pretty well and still thing they will now

@Sceleris I did exactly the same thing. Had to protect them from their 3+ defence.

Some fun videos on Kingdoms of Men. Battle reports.

Looking at running something along these lines.

– Blessing of the Gods

I like the looks of the Assassin. Been thinking of running 2. Can shoot , can hurt war machines, heroes , even troops. All around versatile guy.

Why siege weapons over cannon? Siege weapon is useless at shorter ranges. Cannon also has Shattering.

Got ya. I understand that.

I think it’s worth noting that you have 300 pts (305 if this is actually a 2000 list and not 1995) in unit upgrades in this list (115 of which is horses + one shot indomitable wills). As much as I like IW - and I do like it, while I don’t care for many of the other army upgrades - I wonder about putting it on the mainline hordes who are very likely to be inspired because they’re mainline hordes. Is 10 pts for one round of fearless worth it? FWIW I do like it very much on the Hero and Assassin, partially because it’s cheaper but also because those guys are likely to not be inspired.

I also tend to see the Hammer as a trap in 3E, thanks to hills granting TC, especially if your list has BC in it (or two in your case). Similarly I wonder about mounting squishy + important heroes (Wiz + ASB) when they don’t have a fast moving unit to tag along with, as it exposes them to sniping (sure, -2 sniping but lightning is going to be big in the meta until it’s reined back in) for only so much upside (also ponies are expensive now). I also try to give my ASB something to do besides inspire - in your list here, it’d be extremely easy to warbow that lad up at the least.

All of which is to say that by my estimation you’ve got about ~100 pts in so-so upgrades to work with, should you need the points.

This is pretty much a port over from v2, without really having looked too much about the changes.

The IW is handy (for the reasons you add in the edit) on the big units.

Hammer on the pikes was a rock in v2 and still think it will be in v3, while the items on the footguard add to their already decent stat line.

Will give this sort of list a go and see what does(n’t) work. I’ve got plenty of models to try out (with more shieldwall and sergeants being the only bits I can’t bring to the party)

I guess this list placed at a tourney. Lots of complaints at war machine/ shooting spam. Goblins do it better than KoM i think. Another list had 4 dragons. Tourneys are like that. 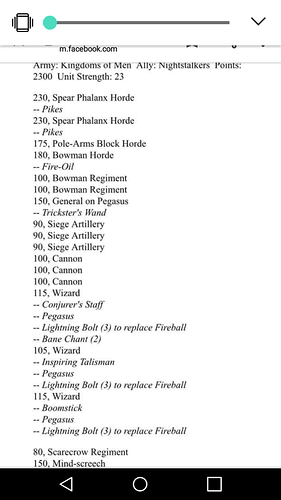 The main change from a v2 list is no one would have taken cannons!

This is my understanding regarding the tournie.

US events often have a very skewed meta and this one was very war machine + flyer heavy.

Lots of lists were ‘active’ rather than ‘reactive’ - ie this is my plan and I’m doing it, as opposed to lists more able to counter what someone else did.

2300 allows additional duplicates of stuff without really any negatives, so I’m not a fan really of that points level.

I don’t know about this event, but from some similar shooting heavy wins etc I’ve seen tables with a lot less terrain (esp blocking/tall) than I’d normally see in events in the UK.

Wizards on pegs are good, the infantry line up was solid but I’d have dumped 300+ points of shooting into better line troops

Not what I would have picked, but hard to argue with results. I don’t understand the complaint about war machine spam, but be ok with 4 dragons.
Meh…topic for another thread. I’m just happy to see KoM place well.

I don’t understand the complaint about war machine spam, but be ok with 4 dragons.

i agree that much of the wailing and gnashing of teeth over the idea of warmachine heavy lists is overblown, especially since spam of other sorts seems to be considered ok.

i think the crux of the issue, in the case of “why do people think warmachine spam is bad but dragon spam ok” would probably be the fact that dragons are primarily melee units with secondary short distance ranged attacks. to make use of dragon spam you have to rush the dragons into the teeth of the enemy, which makes them vulnerable to counter attack.
while warmachines, since they have such long ranges, can sit on the far side of the table and inflict their damage with less chance of being knocked out.

personally i think that this is just part of the ‘new edition adjustment’… that people used to ranged unit spam switched to warmachines because bowmen and guns no longer are as powerful, and they don’t want to learn how to run less shooty armies.
since we’re only one month into the new edition, warmachine spam woul;d seem to be the ‘low hanging fruit’ of metas. given the vulnerabilities of warmachines though, especially to cheap individual type heroes, i think that we’ll see it die soon enough, to be replaced by something else as peopole start sticking cheaper mounted heroes and other small fast units in to act as warmachine harrassers. which is a pretty historical approach to the issue. (historically the easiest way to take down field cannons, portable rock throwers, etc, was to send a detachment of fast moving cavalry to swing round and overrun the guns from the sides or behind. the worst thing to try was to charge large formations of infantry into their front which is what a lot of people seem to be trying)

personally what i find annoying and a little disengenous is how the response online to warmachine heavy lists has been for the rules council to ‘nerf’ warmachines, rather than devise tactics and list style to counter warmachines. (like the aforementioned cheap mounted heroes or fast troops units.) i find it especially annoying when the people calling for the RC to ‘nerf’ warmachines to unuseability will then in another discussion go on to call the RC totally unneeded and stupid over various rules interaction decisions.

My problem with the ‘adjust your comp to suit’ / ‘use tactics’ response is that not all factions can, or can only do it to a small extent and at considerable cost. My current faction is Trident Realm, whose fastest (and only!) flyer is a Sp 7 unit of frogs, and attaching expensive wings to a single rather mediocre hero (I am in fact building my own flying centurion tonight). Nor can we take mounts for anybody. Knuckers are a pretty solid contender for WE hunting … but as the best unit in the faction, they’ll be expected to do a lot of heavy lifting, and not all of us are taking three (zero for me due to unlock strain). We also can’t counter-battery for crap, since we only have one WE and it’s kind of a bad one, and we aren’t a lightning spam army.

Likewise, my bigger issue with spam (in particular spamming war engines, flying monsters and lightning) is that it can be pretty gated by faction. TR have none of those three (coincidentally I also think TR is in the bottom third or so of factions). Looking around at the factions, it feels like the early meta is guided by access to 1+ of those big three. Calls to nerf Obviously Great things feel appropriate from a balance standpoint; demanding it be done before armies have had a chance to adapt and the meta actually gel would admittedly be premature.

What I’m not looking forward to is playing a faction whose ability to adapt is limited, as I’m effectively being told to suffer or switch to another army for the next year. I’m quite good at suffering with a handicapped army … but I also own several armies and more in the pipes

acually you have two… riverguard and the riverguard dambusters. (the dambusters also fly). plus the hero versions of the above.
sp7 may not be much but they are nimble. a couple troops of Riverguard would make decent warmachine harrassers without diverting too many points to the job. (about as much as most other lists would have to devote to kitting out a mounted hero for the job or for a troop of light cav) especially since they have those javelins so they don’t have to actually reach the warmachines, just get within a foot of them. and ranged attacks ought to work just fine… warmachines tend to be pretty low nerve.
you don’t have to have very fast harassers if you can do ranged harasser options.
troops of riverguard, the Naiad Stalker hero and the Riverguard sentinel hero all seem like viable approaches.

I think its too early to tell. But I did see all the calls to nerf war machines already.

Rock is too powerful , please nerf.

I can see there is no pleasure to play against armies like the one posted above. However, is it really that effective. My impression is that with sufficient amount of terrain on the table such type of an army would find it difficult to win especially in some scenarios.

) being so effective now. They were not considered to be so good and reliable in the 2ed, maybe with some exceptions like their spamming in goblin lists. What changed. I have not done the math but it seems they are just hitting more reliably while doing less damage. If this is the case then spamming the war engines should not be much better than it was in the 2ed. That being said, some armies may be missing tools to deal with armies that spam the war engines in combination with lightning bolts.

I did see it mentioned that lists in that tourney had few ( or none) hard counters like cheap mounted Heroes, etc.
I did not look at every list. I only saw the KoM list ( my interest) and 2 Goblin shooting lists.
It seems the lists could be great against certain match ups, or if your dice were " hot". But if you rolled poorly or if the enemy got into your soft back line…ouch.

I did see it mentioned that lists in that tourney had few ( or none) hard counters like cheap mounted Heroes, etc.

This definitely makes running war-engine heavy lists easier. Having a good amount of terrain on the tables is another important factor. Has anynone posted some pictures from the event so one could get an idea how the tables looked.