I have been listening to some recent podcasts (countercharge), and there is ongoing reference to the lore of Pannithor not just in the rule book, but also as the background to various novels. This is a little reminiscent of the Black Library (Warhammer). I don’t see any of these novels referenced on the Mantic website, so my question is… is/are there other sites that review and comment on these novels and any new releases?

ola, yes they’re expanding the background, here are some links.

There are indeed and I can’t recommend them enough.
Mantic isn’t a big company, so the publishing is being handled by Winged Hussar Publishing.

Here’s a Mantic blog on upcoming releases; a little dated, but give you and idea: 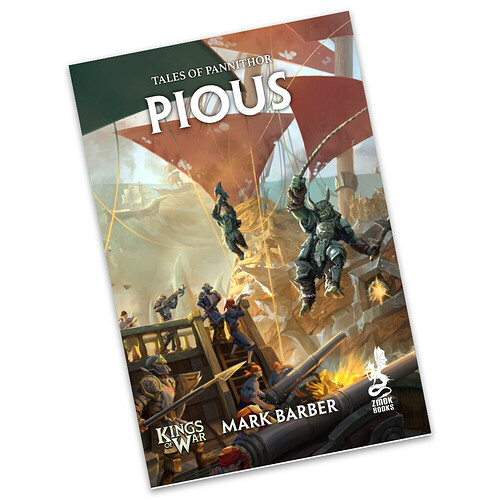 Welcome to our Christmas Blogs! Over the next few days, we’re going to be keeping...

Novels so far include:
Edge of the Abyss anthology. A few short stories of mixed quality. An enjoyable read, but not as good as the novels; which are wonderful.

Steps to Deliverance. Story about Basilean Paladins fighting off an Abyssal incursion.
Drowned Secrets. Follows and exiled naiad on an adventure.
Pious. Released with Armada. Age of sail Basliean Navy vs orc pirates.
Nature’s Knight. Order of the Green Lady deal with night-stalkers.

You can get the books on Amazon buy searching for “Tales of Pannithor” or “Tales of Mantica” for the older books.

Thank you @Gerrcinn and @DarkBlack for the great info. I will definitely check these out

I agree. Steps of Deliverance was the first book based on game ‘fluff’ I’ve ever read and it was actually quite good.

I recommend steps to deliverance and drowned secrets both excellent reads.

It’s good to know that they’re worth the read. I’ve always been a bit leery of game tie in books, but maybe I’ll give these ones a try.

It was the same with me. But Steps to Deliverance was a good read. It’s not ‘Nobel prize worthy’ and still book based on a game, but still. Definatly no waste of time.

Hi!
What is the reading order of these books? I saved them on Amazon but would like to start in the beginning

I liked the short story collections, both for KoW (Edge of the Abyss) and Deadzone (Containment protocols). Light reading but great fluff and while some stories i couldn’t really get into, some others were quite nice and overall a good read.

Didn’t get around to reading any of the novels yet.

Hello All,
It’s great to see some interest in the novels here; I’m one of the Winged Hussar authors so I should try to be here more often to talk through this stuff! I’m the guy who wrote Steps to Deliverance, Pious, and 1/4 of Nature’s Knight. Thank you so much for the compliments, and you are entirely correct - it’s not Nobel Prize stuff!

But rest assured, a tonne of effort goes into each and every one of these, even though we’re not trying to win prizes! Ok, the running order, and some never publicly revealed links between books for the eagle-eyed to go hunting for:

That’s about as much as I know! If you’ve got any questions, feel free to fire away!

Good to know, that you are on the forums. Thanks for Steps of Deliverance, it’s a really nice book. Even nicer to hear it get’s two sequels. I will definetly get them!

I really want to write one one day