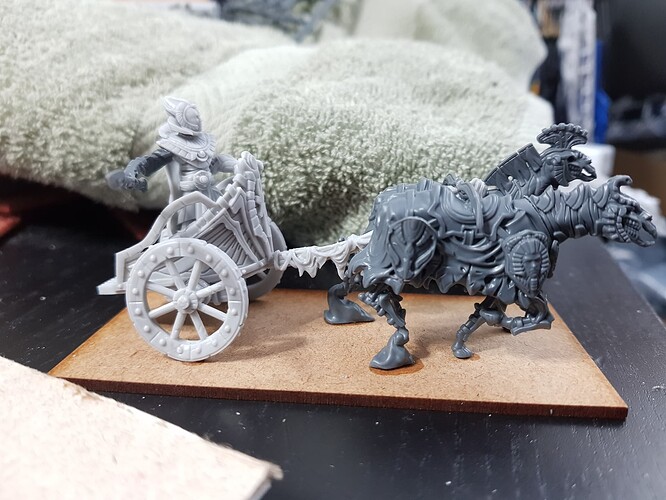 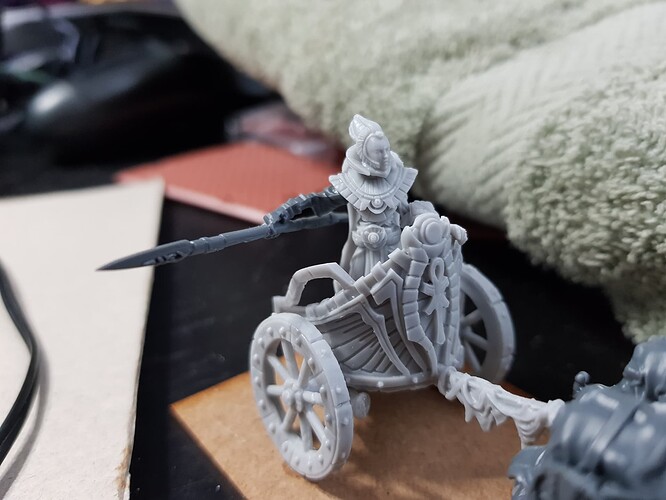 Next army, Empire of Dust chariot and cavalry force.

This is my pharaoh. Didn’t like the default head honestly, the priest head is much more regal looking. The plan is a very bleached and washed out colour palette. Will be a slow burn though as I am moving house in a couple of months, and again a couple of months after that. 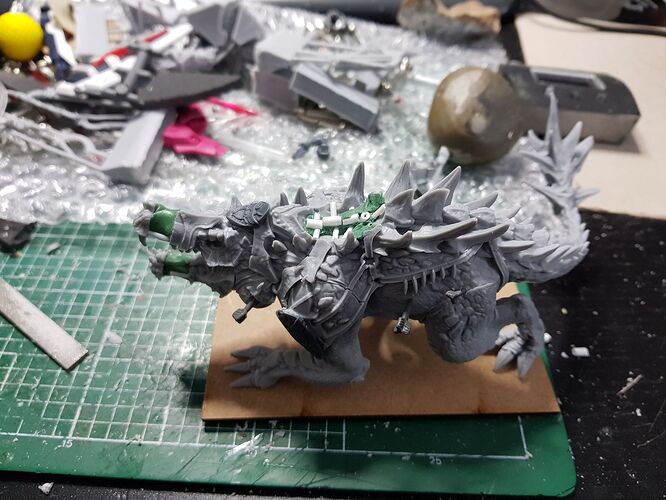 Reanimated Behemoth WIP. An hour or so’s work this evening. I thought an undead crocodile would be thematic, and it’s a good excuse to use one of my favourite models. Hoping to get an Ambush army done in the next few weeks. Though I am also doing a lot of work on some LARP gear, so we’ll see.

Definitely works thematically and nice job on the conversion work

thank you very much 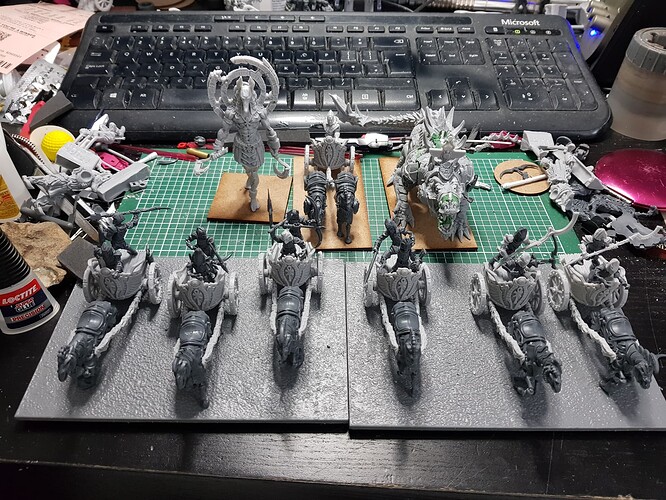 The army so far.

The Pharaoh is too expensive for 750 point games so I need a cheaper leader as well, probably a priest. Got a regiment of Enslaved Guardians to add too.

oooh getting all ready for Ambush then?

very much so yeah, I’ve had no chance to play any games this year and it was my big resolution. Hopefully this will help. I’m also moving at some point next year and I’m hoping to entice my friends into trying it out with a few built and painted Ambush armies.

genius idea, I got my first two KoW games in this year a couple of weeks ago, and I’ve been sitting making 995 point lists since myself.

Friend who told me he has no interest in Kings of War just told me he likes my Empire of Dust, and used to play Tomb Kings in Fantasy. The fool! he’s already fallen to the cause and doesn’t even know it…

Not sure what else I will make, probably some ogres although I’ll need extras. I will be building my regular KoW ogre hard plastic in hordes, so I’ll need to get some more to make regiments with. Probably three mega armies worth at this point. I could finish my Brothermark at 995 too. Riftforged orcs maybe, Abyssal dwarfs? 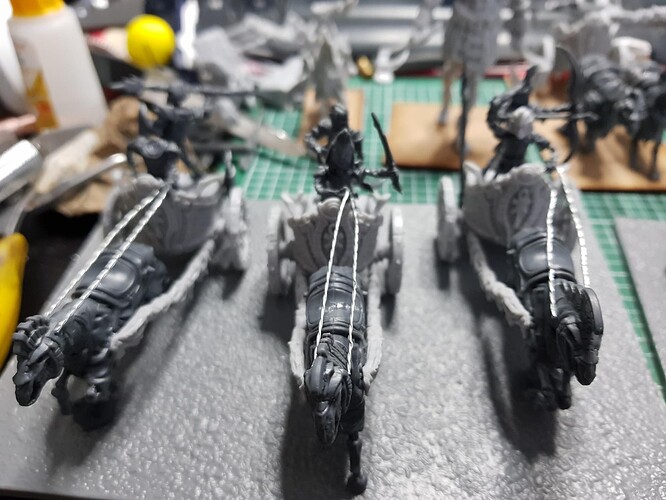 I also made reins

I’m pretty sure they’ll look brilliant once your done with them. Very nice, so far!

Thank you very much 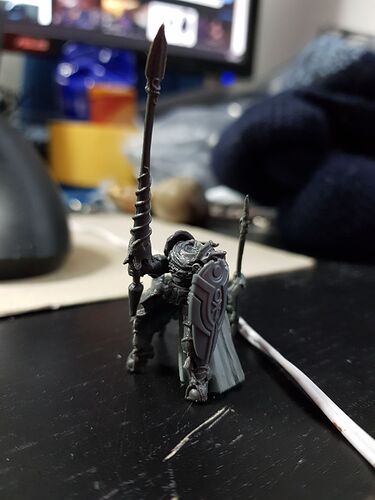 rather than making multiple undead armies, I’m looking at adding some undead units as allies and converting them to match the rest of the EoD. Currently considering soul reaver cavalry, as I have an all mounted army, and trying out various methods and combinations. Full covering armour makes sense for vampires in a desert environment, like the phenomenal armour design for Striga from Castlevania. Alternatively it would be cool to get heads wrapped in a scarf.

I also want to do werewolves but as cats, like Bastet warriors. I’m sure I’ve some somewhere, or possibly stls of them from someone like Raging Heroes. 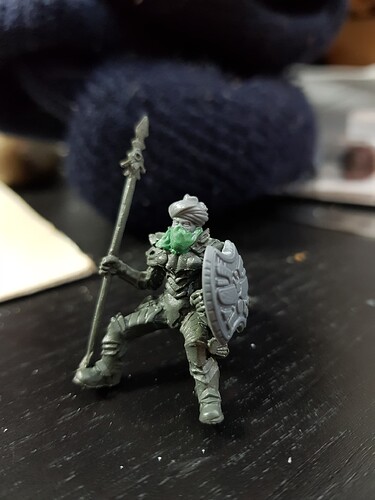 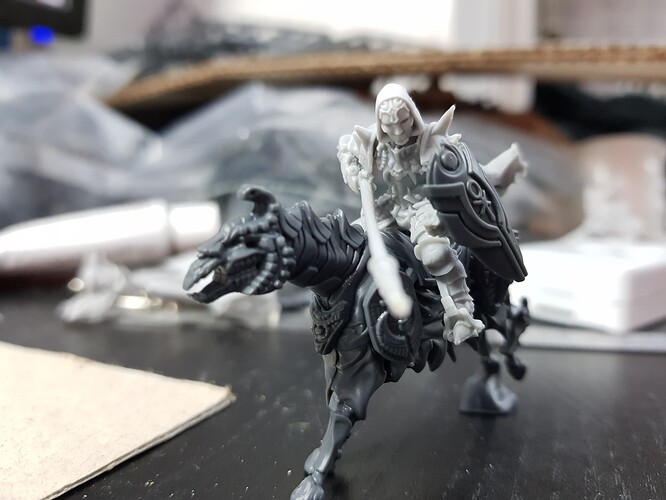 Ok I love this

I also want to do werewolves but as cats, like Bastet warriors. I’m sure I’ve some somewhere, or possibly stls of them from someone like Raging Heroes.

Good memory, Heroes Infinite did indeed make some: 3D Printable Bastet Warriors by Heroes Infinite (they also made the very-sexy-and-probably-not-what-you’re-after Blood Cats). I’m shocked there aren’t more werecats, given how many other werewolves and animalfolx there are to 3D print. I’m probably just searching wrong? I can think of some non-Egyptian / non-Gothic ones, like the Brutes from OPR: 3D Printable Beastmen Brutes by onepagerules (and their variants)

yeah I found them eventually, they just aren’t on the Raging Heroes site, which seems silly to me. They don’t have any pics of prints, and I don’t know anyone with a resin printer so I will probably pass them. I’m currently putting Idol of Shobik heads on werewolf bodies.

Thank you very much, I’m really pleased with it. Masquerade head from Anvil Industries is perfect. 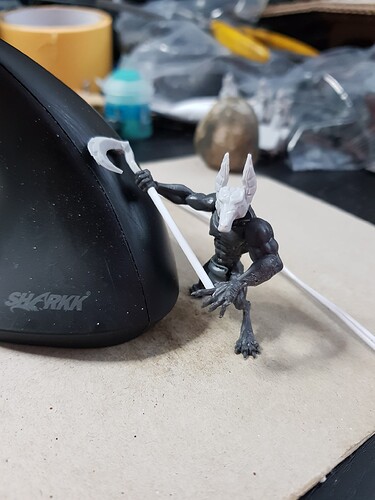