Lob It! and Blast It! rules and other Dwarfy conundrums

I’m trying out using a Jarrun Bombard for the first time, to see what it is like. However, I cannot find the rules for Lob It! and Blast It! anywhere. This would be where having a Find feature on a PDF version would come in handy, or at least an updates book of rules where everything you needed to know was found in the one place… Mantic < cough>
The unit is mentioned in the normal Dwarfs on the 3rd edition, so it is pre- Unchartered empires or Clash of Kings, but i cannot find these rules in the Gamers Editor under :Dwarfs, or The Ranged Phase, or War Machines or Special Rules.
I know from Googling KoWiki that it gets both a lobba and a normal cannon option, but i’d like to see the actual rules, incase i am missing something…Anyone any ideas? Thanks in Advance.

Thanks @coOk_pAss_BaBtridge hehehe. Is that it!?

Why did they bother inventing a name for them, if they were only going to type out what it means afterwards anyway.

I know they just seem to be a normal range and long range shot. The full rules here 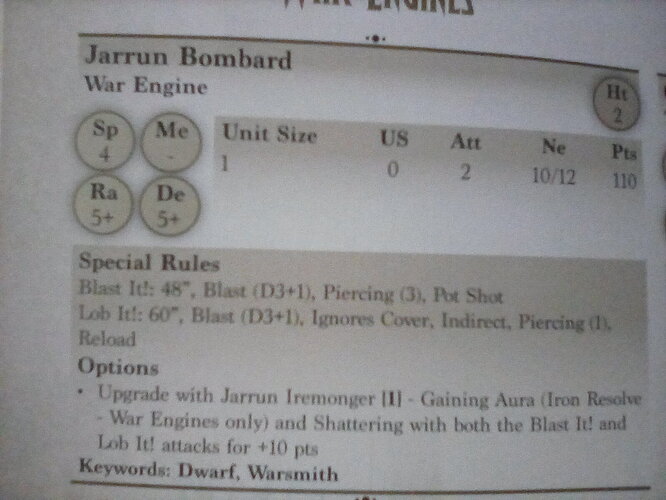 So… these rules are only for this particular war machine, for either Dwarf or Free Dwarf , but the upgrade with Jarrun Iremonger is for only the Free Dwarfs.

Looking at the Pot Shot rule, it would be -2 if the war machine moved at all. Given that the range for this war machine 5+ it means that they need a 7 to hit. Why overcomplicate things? Why not just have Reload instead for both options.
Is this clearly indicative of a Monday morning after a weekend Stag celebrations or am i missing something?

Lob it! and Blast it! are just names for the shooting attacks.

Why did they bother inventing a name for them, if they were only going to type out what it means afterwards anyway.

As far as I can tell, they do this for all shooting attacks (like: short bows, cannon, grapeshot, etc).
These are just a little bit more fun.

Looking at the Pot Shot rule, it would be -2 if the war machine moved at all. Given that the range for this war machine 5+ it means that they need a 7 to hit. Why overcomplicate things? Why not just have Reload instead for both options.

Needing more than 6+ to hit means half attacks hitting on 6.
One shot hitting on 6 is a “might as well” that has some potential for a great story.

Thanks @DarkBlack as you say not quite half a chance, but after years of playing Orks in 40k, i would embrace a 1 in 10 chance every time, and my opponents, having seen me pull off some great dice rolls, would be apprehensive that i’d pull it off too.

Yeah the upgrade is only for Free Dwarf bombards and not for normal Dwarf bombards it’s sort of like the balefire catapults for Undead and EoD they’re the same weapon but different options depending on the army using it.

Would i be right in thinking that with ranges of 48" and 60" the Bombard won’t be moved during the game as the attack range covers most of the table so things like pot shot and reload shouldn’t really be an issue.

You might want to move to a better line of sight at some stage during a game.

A couple of other things came up this morning in my test match of Goblins vs Free Dwarfs 3000 points KoW.
Firstly, i had always assumed that the bonuses for in this case Dwarfs,( i.e. throwing Mastiffs, ) did not carry over into the Free Dwarfs army, or Northern Alliance too i guess. However, Mantic Easy Army allows Mastiffs in my troop selections for my Free Dwarf army. Which leads me to my next incident/point.

I’m used to Goblins, and their Mawpups, either by launcher or already in the unit when set up, so, again… i had assumed that throwing mastiffs would be like for like, but this is not the case. Gobin Mawpups are launched at the start of melee and although they get no bonuses for flank or rear or any other upgrades, the wounds are calculated at the end of combat. The Mastiffs on the other hand are launched during the ranged attack phase. As the charge is done in the movement phase, before ranged attacks, then the Dwarfs will already be in close combat, and therefore can’t be chucking out any half starved and frenzied pit bulls at the enemies. Am i reading this correctly?

Correct ranged phase. Nasty if you get your targeting right, note they always hit on 4+ so no -1 for having moved, individual/cover etc. Also note Packmaster who has aura to give them vicious.

All duly noted for another day , as it is too late now to be of much help. The goblins are in amongst the dwarfs doing what they do best: (Hordes and Mawpups galore).

I’m also glowing in awe of how different my Dwarfs are in KoW to when playing WHF 6th. A totally different army to be sure. The objective i rolled for this game was Invade, which in 6th Edition would have been nigh impossible to get across the board in 6 turns at Mv3, even with marching. They are a sit back, hunker down and shoot anything that moved, whereas the KoW Dwarfs are speed 4 or 5, which although not fast, are well able to get a good clip on to get into new positions, or contest objectives. Added to this is the Free Dwarfs which can get Pathfinder + / or scout.
Furthermore, and this is a game changer for me, they have Brock Riders and berserkers. Awesome! Well done Mantic. I’m not loving the saucepan helmets you have given the models, but loving the Dwarf armies .

Yes it is a MUCH more interesting army to play in KOW vs WFB6th, even if you leave out the cavalry and Earth Elemental Options. Corner sitting and shooting in 6th was dull but you were punished for trying alternatives.

I’m thinking of taking an entirely scouting/pathfinder Free Dwarf infantry force to tourni shortly, which probably won’t work in many matchups, but I will learn a lot, and a less extreme version of the theme with a few tactical gaps plugged might then be more successful.

Mantic have done well for dwarfs indeed!
Not sure that I would have played dwarfs in Warhammer.

@Markconz Yes it is a MUCH more interesting army to play in KOW vs WFB6th, even if you leave out the cavalry and Earth Elemental Options. Corner sitting and shooting in 6th was dull but you were punished for trying alternatives.
I think that in order to quantify balance within armies, Mantic try to make all teams ‘similar’. For instance, a flyer, a titan, some shooty stuff that couldn’t hit the side of a barn from the inside, some expensive elite troops and some heavy infantry and cavalry options. Any differences are subtle, embracing the army style. Saying that, there are still very unique armies, nonetheless.

Mantic have done well for dwarfs indeed!
Not sure that I would have played dwarfs in Warhammer. I would agree @DarkBlack , but i suppose, given that the Head Honcho has a decent Dwarf Army, it is no surprise. I played Warhammer 6th 7th and 8th when they were new and liked my Dwarf army a lot. I had a gyrocopter (scratch built) miners and rangers to help influence the board rather than sit back passively, Thunderers and Crossbow rangers, and a Lord with Shieldbearers. I never had an Anvil of doom, but proxied a few times to see if it was worth the money, but Dwarfs were generally my second army behind Goblins, and then third behind Chaos Marauders.