“Sing, my chariot! Run to your ships – I’ll drive you back to the sea!”

I accidentally deleted the OP of the first post trying to edit it, so here’s a new one. Sceard’s chief inspirations are as follows. Ever since I picked up Rome: Total War (the Gold edition) on Steam and played Barbarian Invasion, I have been fascinated by the Völkerwanderung / Migration Period / Dark Ages / Early Medieval Period. What we recognize as ancient Rome was in a state of flux back then, having reached its nadir in the Dominate, and new barbarus s tates were rising from the resultant chaos. Amongst these were the Franks – fun chaps to play in Total War, with their good infantry and heavy cavalry. In any case, the Men of Sceard are largely Frankish in their literary DNA, by way of Tolkien’s Rohirrim.

Here’s the WIP of the first full rank of Fran warriors (Foot Guard).

Sceard and Its People

Sceard is not necessarily a single nation, but rather a grouping of tribes and peoples into a cohesive whole. Its blue-eyed chiefs and kings are largely extracted from the Fran people – a group of peoples originally from the Ice Mountains. Though having been forced to immigrate to Sceard at swordpoint by their Varangur cousins, they have put down roots here and grown. Though their mailed shield-walls and skill at arms dazzle even the more civilized in Pannithor, their best talents lie in stockpiling food from the harvest, organizing baggage trains, and managing large armies in close order.

If the Fran are the firm hand of the army of Sceard, the tan Alar provide it with a swerving sword. Their eoh horses are fine, but wild. In turn, their riders are rough-and-tumble, free sorts who serve out of loyalty, not fear. Alar hatred for slavers, such as those cowards found in Tragar, is legendary. They serve as light horse, heavy cavalry, and skirmishers depending on age or equipment.

The solid core of Sceard’s armies is the permanent, professional warriors of a noble’s warband. These might be, in the case of the Fran, heavily armored foot. Or in Alar warbands, it is likely to be heavy cavalry. Either way, these men live and die for their lord’s approval. In turn, he provides them with food, favor, and equipment.

Supplementing the warbands are the Fran and Alar yeoman freeholders, who make up most of the army. Peasants and serfs are rarely seen; warrior’s work is largely nobleman’s work. When they do join the march, it is largely as camp followers or as ragtag, yet fanatical mobs. Other arms besides cavalry and infantry are poorly developed in Sceard. The most advanced form of siege weapon is the ballista or catapult, and they are rarely seen.

Tactics are largely based on archaic models. Shieldwall fighting and tightly packed formation are the favored way for the Fran infantry to fight. The Alar light cavalry tends to move across the field of honor in loose order. The latter are more common on the open field, as they will be made to dismount for sieges. While largely static outside of the cavalry, the impetuousness and speed of a Sceard army in full charge is not to be underestimated.

His lifetime would end in a thousand days,

Yet mighty Vala of heaven’s thunderbolt did not quail

Against winter’s maiden, the lord of the air bound for deepest Hell

The rugged, rocky course he stayed!


O mighty Vala, who was it that forged the deadly blade?

Of savage steel, His bloody soul was made!

Through the ringed mail of ice-cold evil, His blade ripped!


Then came Kurgan, murderer from the start, cursed lord most vile.

Vala cast the screaming deceiver down,

The Fran watched in awe as the foe of all struck the ground.

He was howling all the while.

He stood firm at the very end of days!

Against the raging tide, the devil’s flood

The people of Vala were saved!

-A common scopic poem of Valandor, sung to the Fran kings. 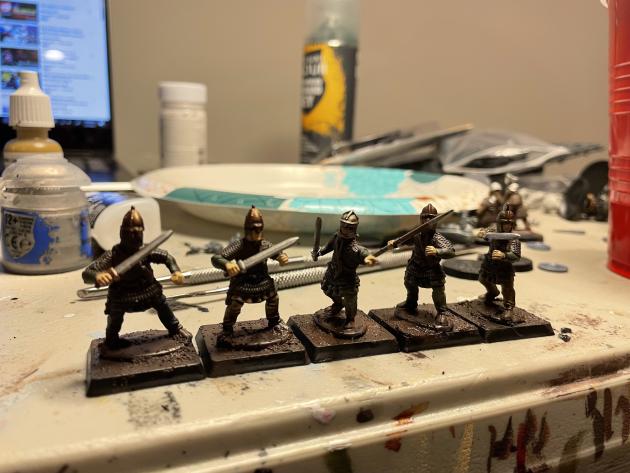 Need to do shields for these chaps, but here’s the first rank.

based on the shadows on the base, the light is coming from right above the miniatures. this creates a lot of shadow and hides the details. Maybe try to get the light source angled so it hits the front of the miniatures next time you take photos, so we can better see the details.

A good start, looking forward to seeing what else you make for this army. 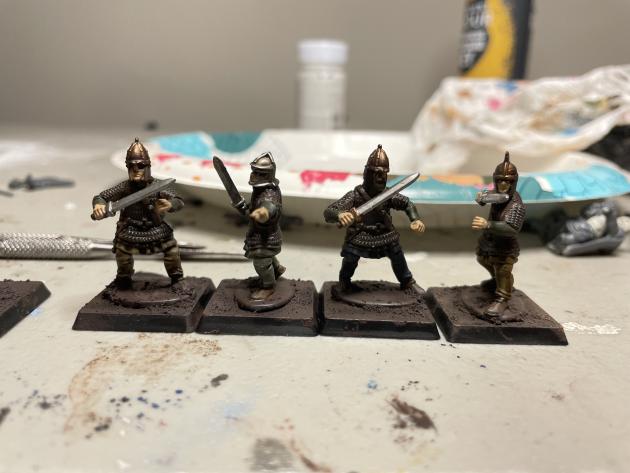 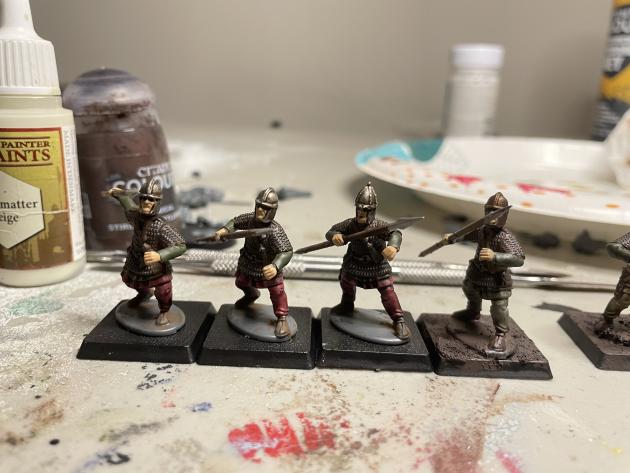 My dark age army went with a varangur vibe - but fireforge, victrix, gripping beast etc all work well together, esp if given similar shields and paint scheme