My close friend and I are heading over to Lansing, MI for the Michigan GT. We’re super excited.

Here’s some pics from our practice game last night. We timed ourselves 65 minutes each. I ended up winning due to a couple of lucky rolls.

Hope to meet some of your there! See you tonight and later this weekend. 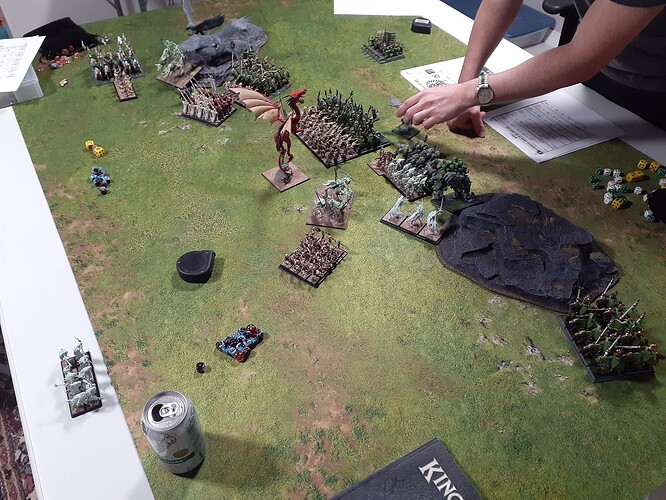 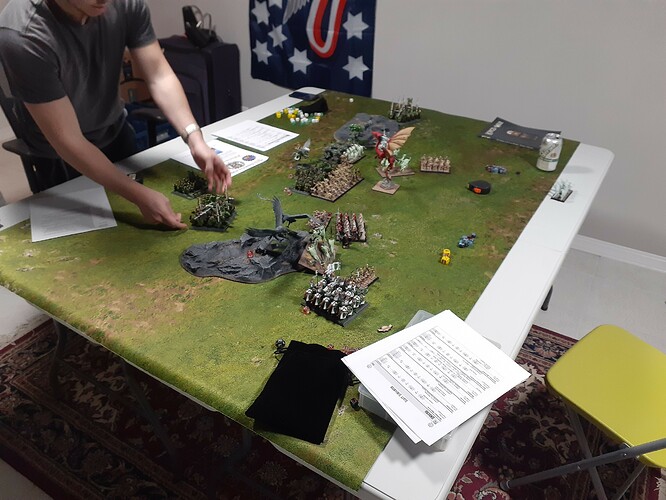 My friend and I had SO much fun meeting up with other KoW players. This community rocks !

It was a fantastic tournament, so glad I took the opportunity to attend. It was a great venue and run very well.

Your Basilean army was fantastic! Too bad I didn’t play against it.

Thanks, how did you do and who did you play?

@Bonemage In terms of tournament points, I did pretty poorly. Roughly, I scored 45 tournament points – definitely on the lower end. However, I was honored in receiving the sportsmanship trophy.

In this order, I played against:

Overall, I’d say all of the matches were close. I put up a fight at least where I lost.

My list will need a ton of improvement, however my idea of spamming wights worked – they hit like a truck. My vampire lord had too many spells – he was way more effective charging and hitting. Being my first wargame event (let alone Kings of War), I learned a ton.

I’m eager to play again with my gained knowledge of the game! I’m thinking about heading down to Ohio for Gem City Massacre come December.

This was the Grand Prix, right? Great theme, love the chariots.

USLaE has coverage of the event, including loads of photos: https://blog.untilsomebodylosesaneye.net/2021/10/grand-prix-of-michigan-2021.html

Yeah Wights hit hard and are a great hammer. Also it’s a good observation on too many spells since as you now know well it sounds like you can only cast one generally and a combat character like a vampire often has bigger fish to fry.

What were you using for chaff and/or front line troops?

I played undead/ vampire counts all the way back to 6th edition Warhammer til late second edition when I switched primarily to Bascilia. So I love a long history and love for Undead armies.

Also I find I learn far more from losing then from winning over the years.

Any chance you might make it to Dragonfall in few weeks in Lake Geneva?

@Bonemage Well of course you love the undead, given your username! haha!

For chaff, I used a couple troops of wraiths and some skellies. I also marched up a regiment of soul reavers behind a troop of ghouls.

I would love to make it to Dragonfall – don’t think I’ll be able to though, however. I’m thinking about hosting an event near me if possible, I’d have to see if our local stores are opening for games again.

@Boss_Salvage Yes! That’s the GT – funny seeing myself in there haha

Make sure to post it as far and wide as you can if you do run one, you never know who you might find coming to it.

@RobP Yes absolutely! It was fantastic meeting you too – thank you for being so inviting and having lunch us.

Glad the event was awesome! I didn’t make it over there because I was sick. Wanted to see the GT at the new venue. Oh well, have to wait until next year!

How were the vendors?

@VigoTheButch the vendors were pretty good. Mantic had a massive selection.

Darn. Love Michigan Toy Soldier. Sad I missed them in my backyard!

I think a couple of guys from the GT are trying to meet up in Howell.

I can definitely let you know.