As some of you may have noted in our grand painting thread, i’ve been chipping away at the Dungeon Saga Deluxe Box lately. Finally, my first milestone in that project is reached and the first two adventures (and the 2 prologue adventures as well) are now fully playable.

I may even have an opportunity to try the game out on the weekend, wish me luck.

So without further ado: The Heroes, the Bad Guys and the Props - so far: 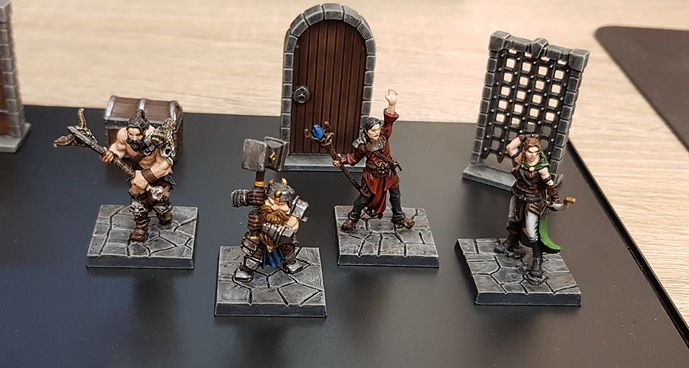 Thanks @Nav. I tried to not spend too much time on the Undead and Props, but still make them look somewhat decent. I do want to get back to my KoW army rather sooner than later after all

Most of them are just washed and drybrushed with just a little highlight work on top, which appears to work just fine with these models. Only the Heroes i spent some more time on and did a little layering here and there.

if you have Mantic points spare, the Innkeeper, his dog, the halfling warrior and Blaine would look great along with the rest and only 10 points

Thanks @Nav , that bundle looks interesting

Oh and we did play today btw, both tutorials and the first “real” adventure and it was a blast

The heroes delve deeper into the Dungeon … and my fiance handed my a** to me by killing the big evil troll in a single round with a concentrated effort from all heroes and some very lucky dice rolls … and while I managed to delay her heroes afterwards, she literally escaped through the exit door in the very last round, the outcome of the entire game being decided by that single dice roll for smashing the door in.

At that point, almost all of my minions were dead as well, as you can see below.

Next game will be against the first “real” boss of the game “Elshara”, then I’ll have to paint some more, before going further

Slowly but steadily getting there.

Got everything complete and ready to play for almost all adventures up to and including the undead Dwarf King … only the very last one is missing.

Have to add … that what started as a little side project turned out to be incredibly fun, not just to paint, but also to play with my fiancee during the lockdown(s).

As already mentioned in our ongoing monthly painting thread: “Dungeon Saga Deluxe” has been completely finished now, so I’ll update this thread as well with some more recent pictures of the finished minis:

Quite happy with the end result and overall look, even though I spent way less time per mini on it than I did with my KoW Elves.

Looking forward to get a few games in now, although that will all be with my fiancee. Games with friends or even games with 3-5 people at the same time will have to wait for a while, with the current pandemic situation in Germany.

Now with Dungeon Saga fully painted, my plans are to give my elf army the full attention again, although I can imagine I’ll be back to Dungeon Saga eventually and paint a couple of more models from the orc and demon expansions, maybe also add a orc or abyssal warband to my vanguard collection. But for now I’m quite happy with my Dungeon Saga painting

it looks fantastic. How does Dungon Saga compare to D&D?

More like Heroquest or the D&D box games like Castle Ravenloft Nav. Some RPG elements but a dungeon crawler.

Looking great Mikes. They are very good miniatures and you have done them justice. Hope they see a table soon in their full glory.

To my shame most of mine are only base-coated …

Thanks Niall, still worth a go, and can always be used for RPG terrain and monsters too i guess

Thanks @Nav und @Niall78! And yep, they definitely will see a table rather sooner than later

And I’ve played DnD a long time back, but only “Pen and Paper Rpg” and we didn’t use miniatures at all at the time, so not sure how that experience compares to what you have in mind @Nav. In any case Dungeon Saga has much more of a “boardgame” feel than DnD imho.

Similar to HeroQuest as @Niall78 pointed out, but I guess you could also say it’s sort of “DnD” if DnD had simplified KoW-rules and it was all dungeon crawling, not a full RPG.
The original campaign is a set number of scenarios with set heroes and equipment for each scenario, so really easy to pick up and play. But there’s also advanced rules for leveling heroes up and even going into “uncharted” dungeons that you explore as you go and evolve randomly.

Not sure if that all made sense, tried to describe it best I could!

It sure is a great game for a gaming night with a bunch of friends and even someone only casually interested in wargaming or RPGs could easily jump in and play with a group.