Moonrakers at Stane of Blood 2023

MOONRAKERS AT STANE OF BLOOD

Early January and its time for the first Kings of War tournament of the year. Stane of Blood was a one day, 3 game, 1995 point tournament and the Moonrakers attended in force.

Leo took a fearsome looking Sylvan Kin list with 3 regiments of Gladestalkers and 2 Greater Air Elementals (I can hear the Boos from here). 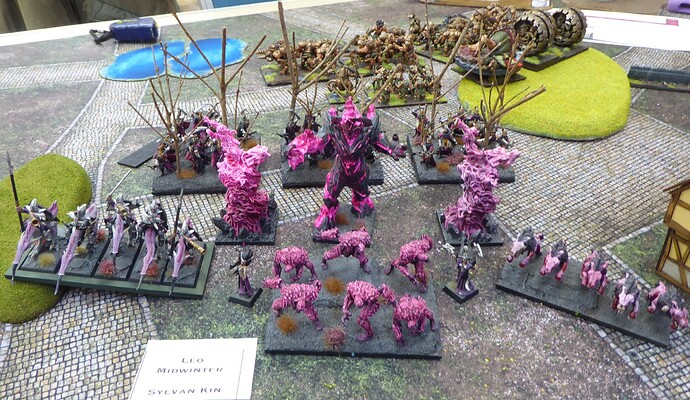 I went green with my army of the Dark Green Lady, featuring: 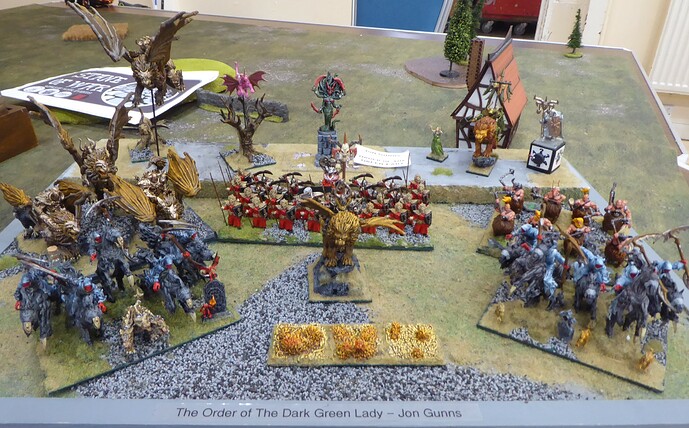 The venue was a village hall with plenty of space and a kitchen to allow brewing tea and coffee. 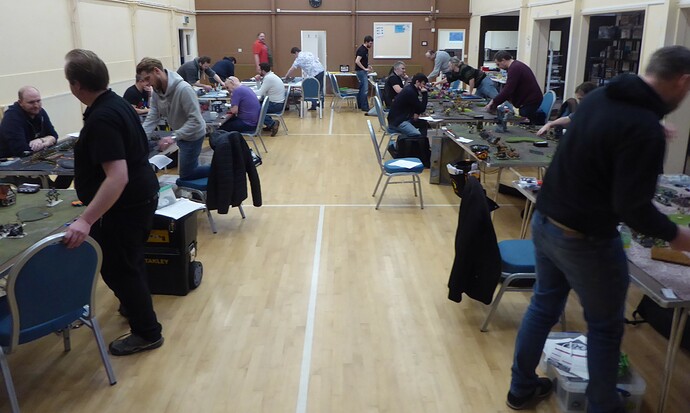 Twenty four players attended and it was a tough field with 10 Masters players present.

Game 1 was Push and I was paired against Seb and his League of Rhordia. Having won the roll off to select sides, I felt bad about giving Seb the side with a piece of blocking terrain in his deployment zone. This meant that his infantry heavy force had to split between the 2 sides. He deployed most of his shooting on my right and on my first turn I moved my faster and more nimble army to my left, effectively negating his shooting. 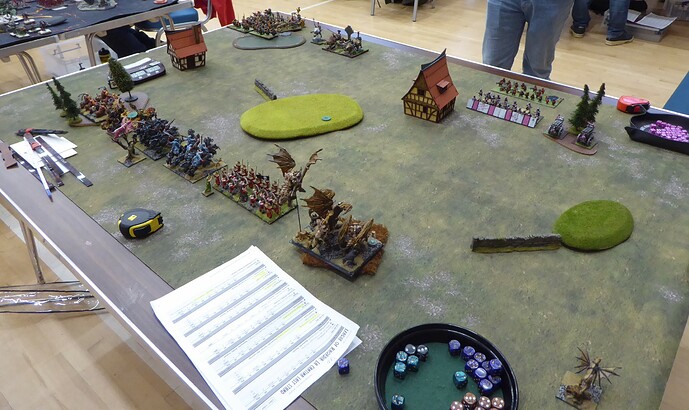 As the game progressed, I was able to use my speed to choose the combats that I wanted, trapped his token-carrying unit in his half and destroyed it while carrying my own tokens into his half of the board. I ran out with a big win. 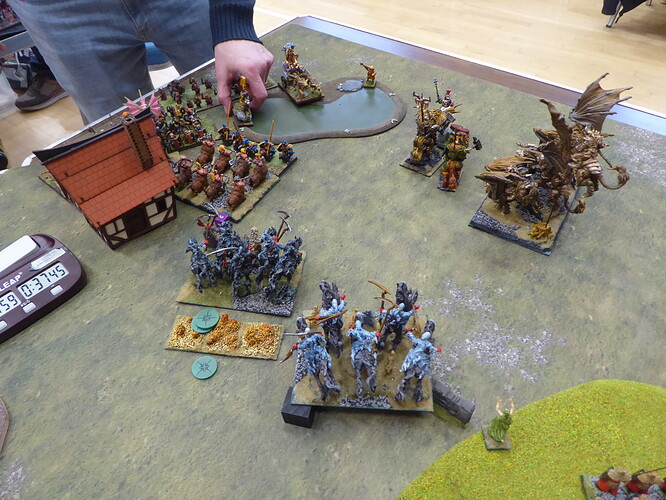 For Game 2, I was paired with Mark and his Rat Slaves in a game of Salt the Earth. This was a bad match up for Mark as his plan relied on his own units inflicting damage after they had bene destroyed, but with masses of regeneration, Radiance of Life and Heal, I could minimise the impact of this damage. My dice were also red hot in this game, in one turn, I regenerated 6 of 10 wounds on a regiment. 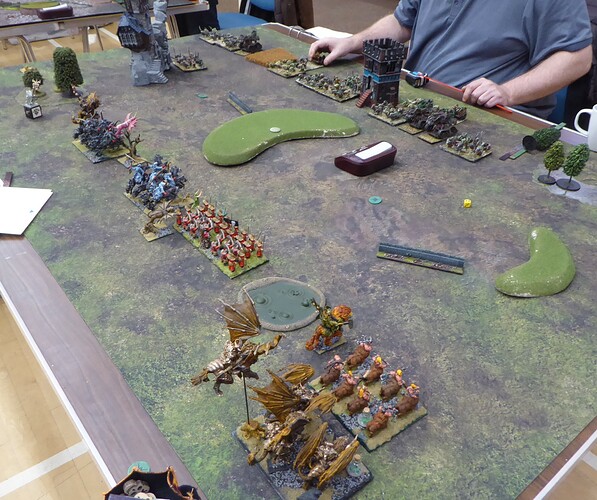 Early in the game, I flew onto 2 tokens and razed them, Mark then razed 3 more meaning that we were left fighting over one token on my side of the board and the centre token. I flew my Forsaken forward to try to hit flanks and rears but Mark angled his units very well to present front facings only. Nevertheless, my hot dice helped me to another win.

My reward for 2 successes was to face Chris, current UK number 1, and his Northern alliance in a game of Control.
Earlier in the day, someone had tried to sabotage Chris’s army by sawing through the legs of the table on which he was playing so that his army fell to the floor. However, his Norther Alliance was made of stern stuff and by the time our game rolled around they were back to fighting fitness.

I made a couple of bad mistakes, including allowing Magnilde to charge and ground my Forsaken early in the game. My dice were a mixed bag with the horde of Retainers charging a De 3+ regiment and inflicting only 3 wounds while elsewhere, a regiment of Redemption luckily survived a serious multi-charge. In the final analysis, Chris played much better and ran out the winner although the attrition on both sides was not that much different.

I finished with 2 wins in 5th place. Leo had one win, one draw and one loss and finished 12th while Andy faced some bad match-ups and traitorous dice to finish with one win in 17th place.

Justin won the event with Chris, my 3rd round opponent finishing second.

Lots of lovely armies on display. 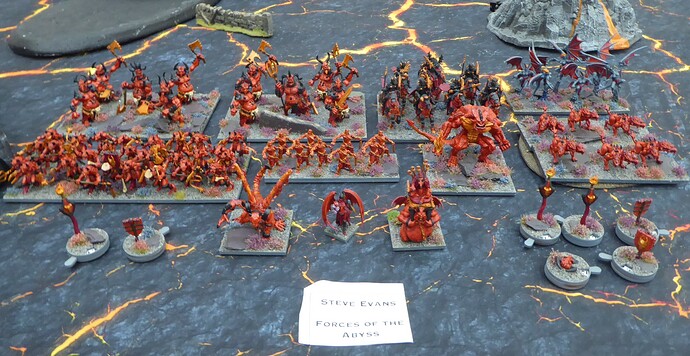 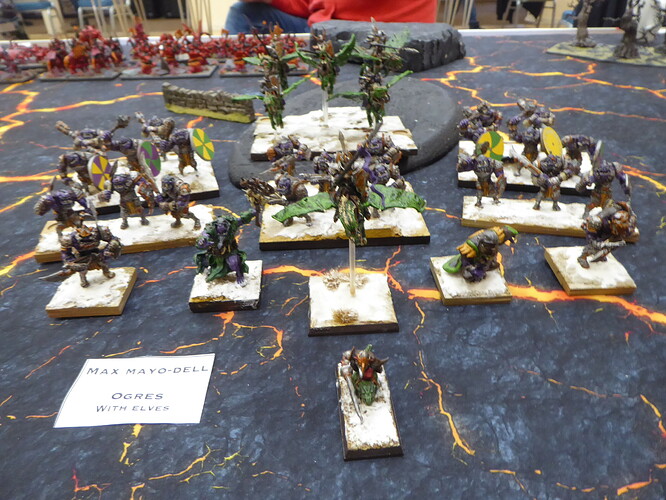 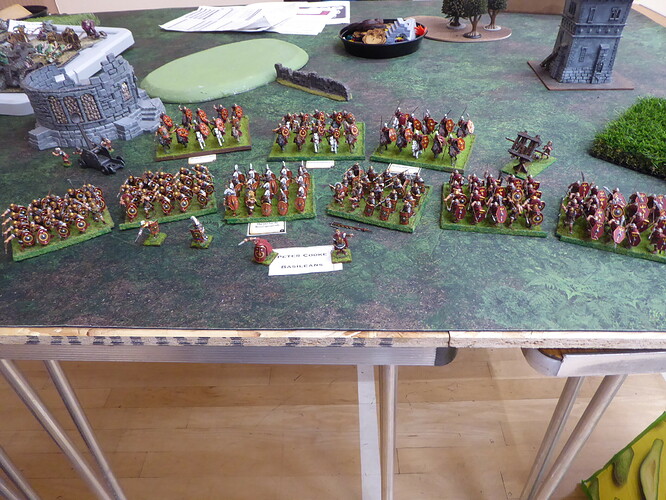 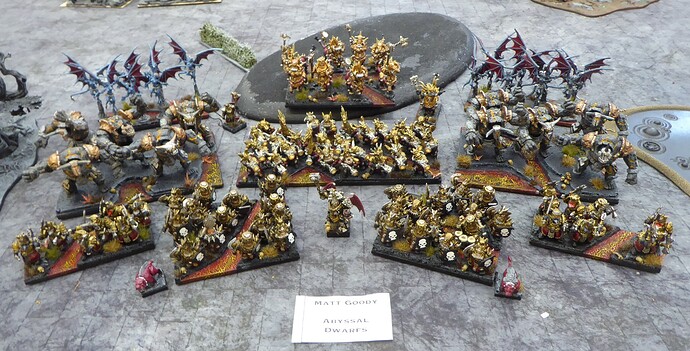 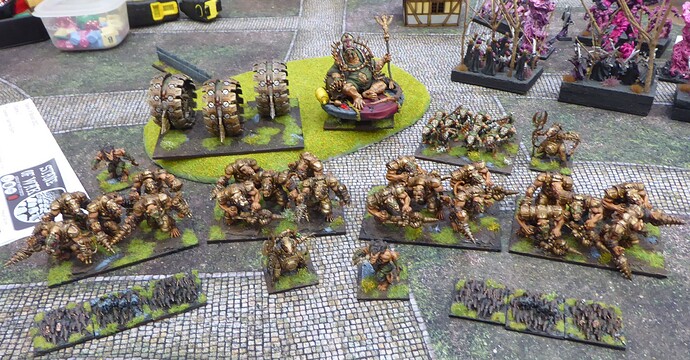 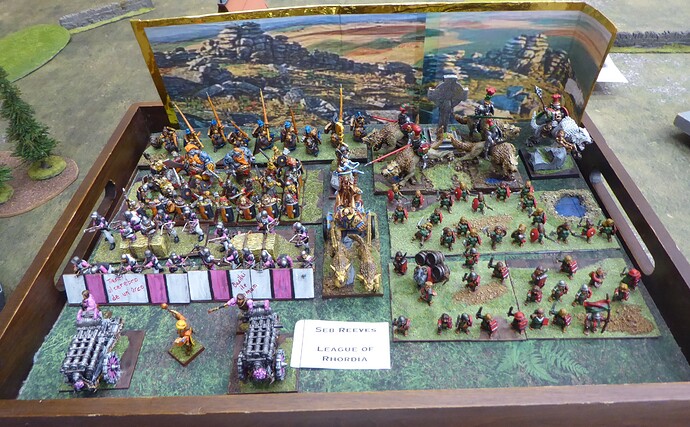 Steve ‘too much time on my hands’ Hildrew brought a strange looking 100% non-Mantic army of long-eared Goblins. I’m not sure why anyone would want to try to improve the look of the noble Goblins, but this army caught everyone’s fancy and was voted best painted. 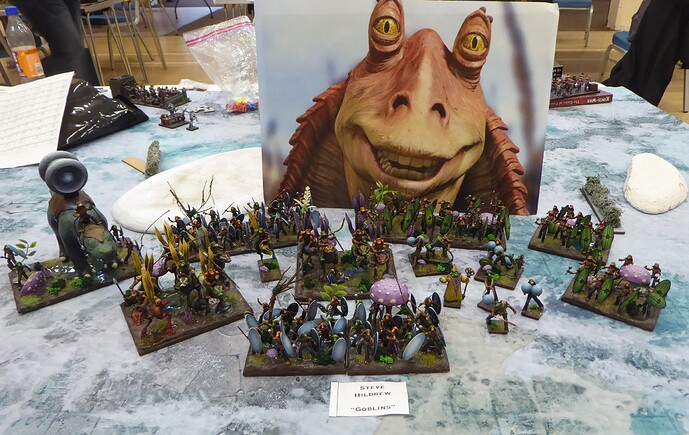 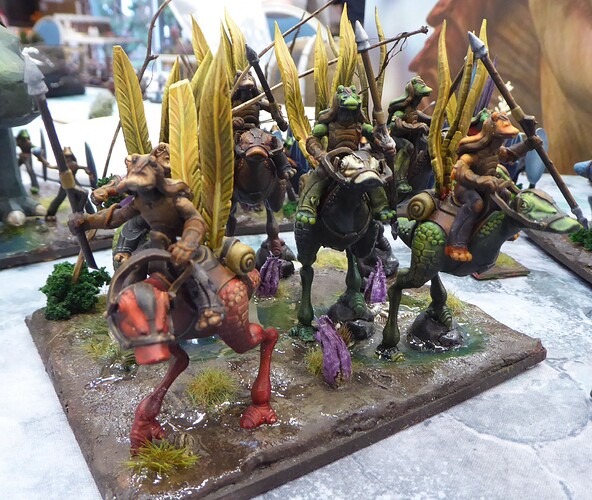 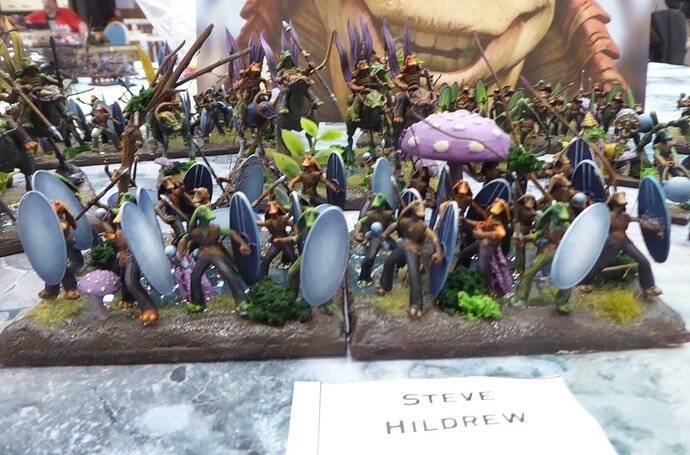 Thanks to Matt for organising the event and to all my opponents.

I started well…
Game 1: 21 - 8 Win vs Richard Lakings Ratkin (6-0 on Push Scenario)
could say the result all hinged on a single dice roll. Bottom of turn 6 I shot off Richards unit carrying 4 tokens… there was no turn 7 for him to pick them up with another unit.

Game: 14-14 Draw vs Danny Graves Abyssals (1-1 on Salt the Earth Scenario)
Danny had me under the cosh early on, I fought it back to a draw late game and could have stolen the win if I had remembered Nimue had windblast as I could have potentially pushed Danny off the contested centre objective DOH !

Game 3: 8-21 Loss to Rob Hutsons Imperial Dwarves (1-3 on Contol Scenario)
I deployed badly, Rob advanced on me with his wall of Defence 6 and positioned units so it was hard to find flanks needed to break it down. My usually devistating shooting way totally ineffectual (Sympathy anyone???

As for the event it was a bit unusual having a 11:00 to 19:30 running time however this was not a gripe just different and I didnt mind it.

Lots of gorgous armies on display and each opponent was friendly and made each game enjoyable.

Will be hoping to attend another “Stane” event in the future

Congrats on the placing, especially with that level of competition, cheers for the report and the army coverage!