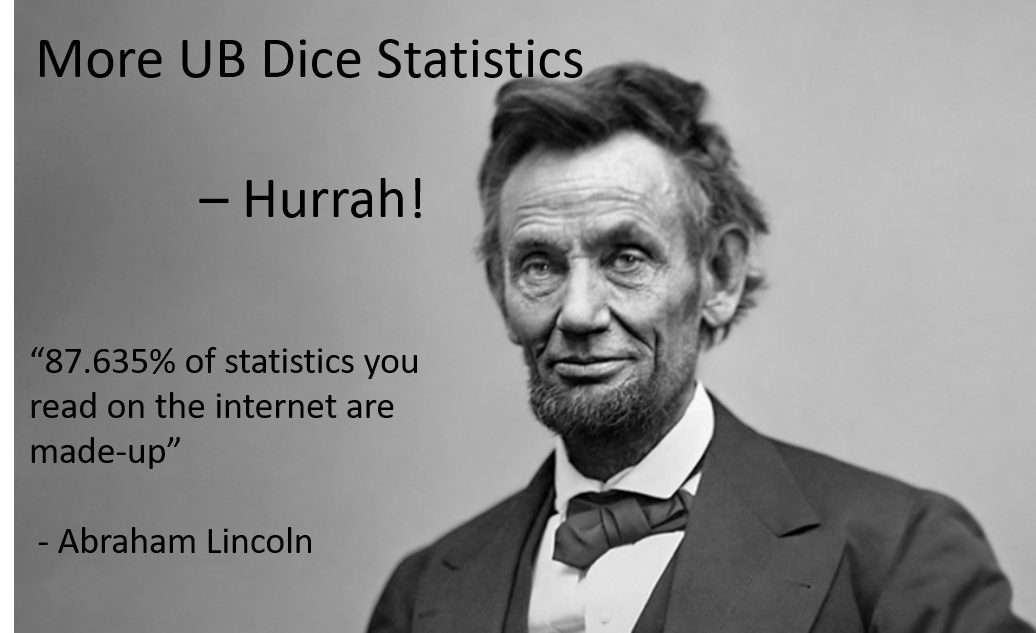 This article was inspired by 3 things.

I started by rolling a single dice a lot of times. It immediately became apparent that the number 5 was grossly under-represented in the results, but as I rolled more dice this corrected itself and, within the bounds of the statistical sample, I could see no long term bias. I recorded the numbers of repeat rolls and ended up with the highest chain being 5 consecutive 6s. There is, I think, about a one in 1,296 chance of rolling the same number 5 times in a row and given the size of sample used, rolling one chain of 5 is not unexpected.

These tables show how the numbers rolled on one D6 varied over time. Sample 2 used the data from Sample 1 and then added more rolls. 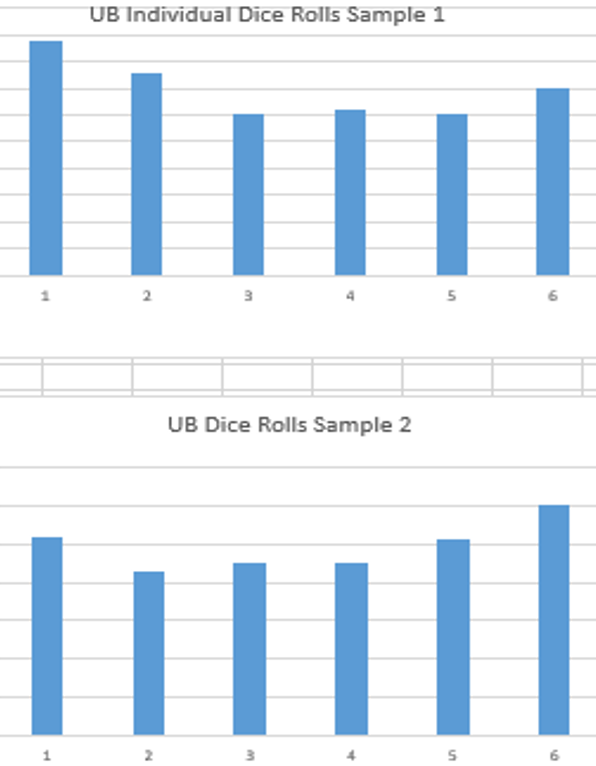 I then moved on to rolling 2 X D6s to replicate nerve checks to see how often the same combination of dice arrived consecutively, for example 1 and 4 followed by another 1 and 4. I rolled pairs of dice in quick succession to see if this had any bearing on the outcome. Interestingly, had I stopped after my first rolls, the statistics would suggest there is a 100% chance of rolling the same numbers as I rolled 3 and 4 immediately followed by 3 and 4.

In fact I rolled a much larger sample and was quite surprised by the results. Ten % of the successive rolls resulted in the same numbers appearing. This was split exactly between rolls made immediately and those not rolled immediately with 5% for each. This struck me as a much higher percentage than I would have expected. And so I did some maths (did I tell you that I had to resit my maths A level at school?).

If you have a blue dice and a red dice, the chance of rolling exactly the same number on each in the next roll is 1 in 36. But, UB dice does not let us know which of the 2 dice rolled scored which number and so the chance of repeating ant particular roll such as 3 and 4 is in fact 2 in 36 as you can roll 3 and 4 or 4 and 3. For doubles such as 1 and 1 (6 in 36 occasions), the chance remains one in 36.

So the theoretical chance of repeating the same double dice roll in the next turn is about 5%, or about one on 20, which is probably more than most people expect but is only half of what I observed in my trial. It is possible that the difference is due to the sample size and that a larger sample size might produce results that more closely match the theoretical result.

Great post & very interesting and does sound pretty suspicious. I hope someone (else, not me, haha) delves into this further one day