One of the joys of attending a Kings of War tournament is seeing the different tables laid out with an impressive array of terrain. 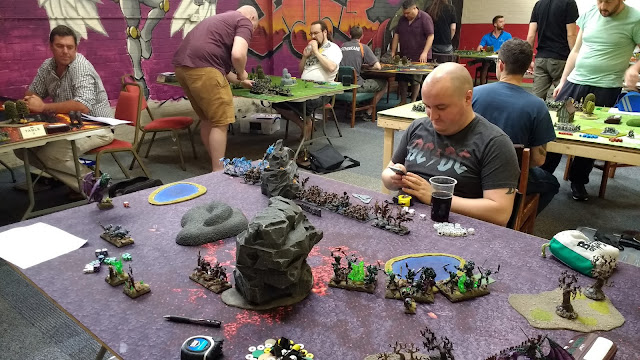 But how effective is battlefield terrain in enabling game play? In this article I will look at some issues caused by the terrain on the battlefield and look at some solutions. This will not be to everybody’s taste – those of a nervous disposition should stop reading now.

The Goblin cavalry want to enter the wood: 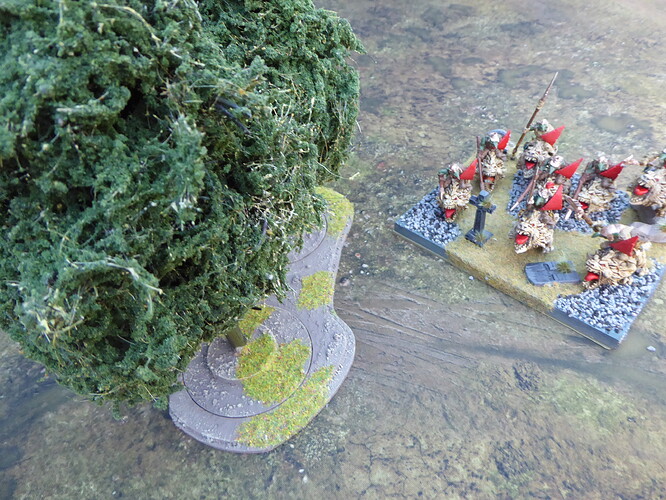 And now the Great Birnam wood shall come to high Dunsinane hill. 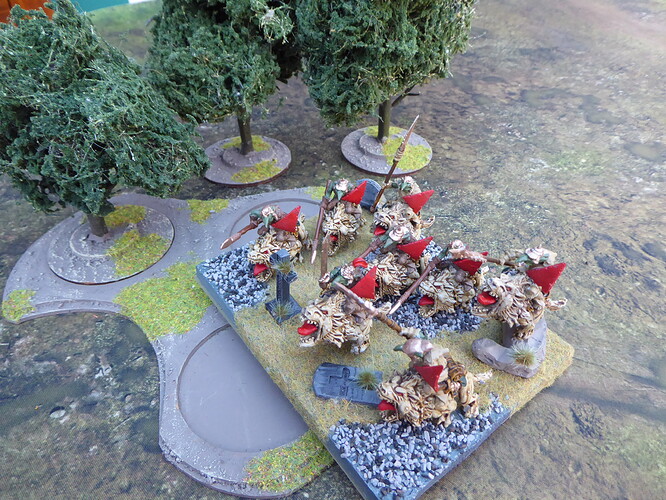 How about obstacles? Do you balance a unit on top of the wall, possibly losing track of the exact positioning of that unit? Or do you move the obstacle while fighting over it and then try to remember to put it back in the right place (something that Andy 2D6 admitted to getting wrong in a battle report)? 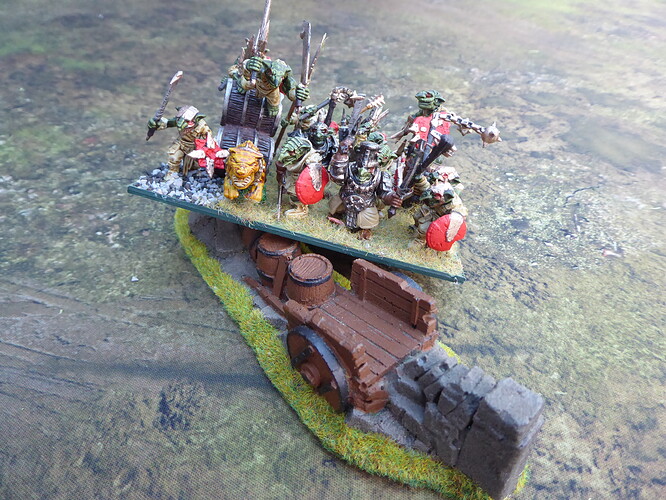 After a couple of turns playing, the nicely laid out table is now a bit of a mess of displaced terrain.

And then there are hills. Or rather, low rises in the ground. ‘Hills’ are generally height 3 which means that they conceal regular cavalry but not large cavalry, meaning they are about 8’ high. My garden slopes by more than 8’, which is a pain when gardening but hardly deserves to be called a hill. Typical problems with hills include tall models falling over. 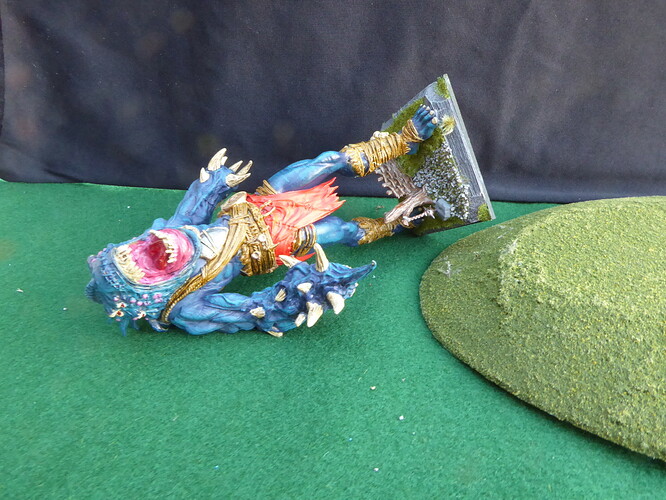 One option is to build a dice tower. 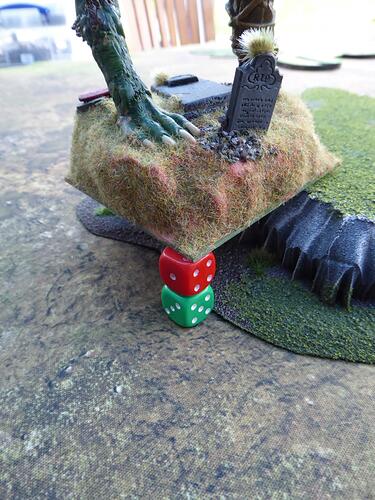 So what is the answer? Well, 2D terrain.

However, pure 2D terrain can look a bit sterile, so is there anything that can be done to gain the advantages of 2D terrain while mitigating the poor aesthetic? Here’s some options.

Obstacles frankly do not need anything other than the 2D outline and make life a lot easier. 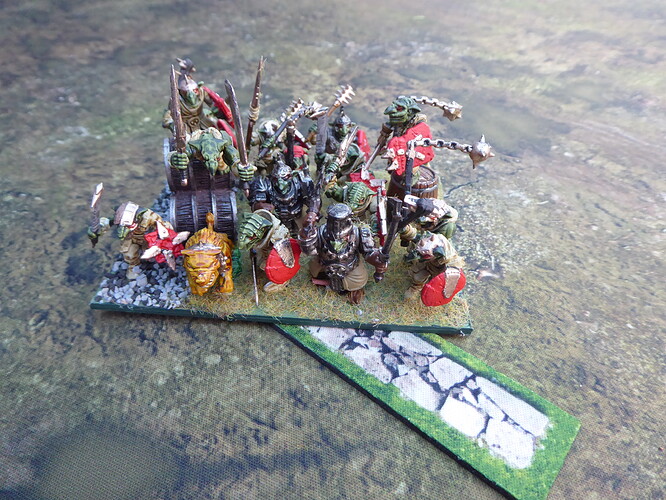 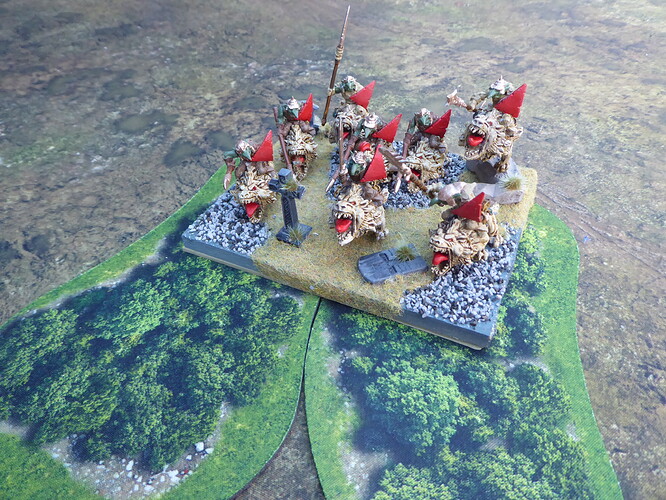 Single tree however, can make the scene more lively without causing the issue of having to accommodate multiple displaced conifers. 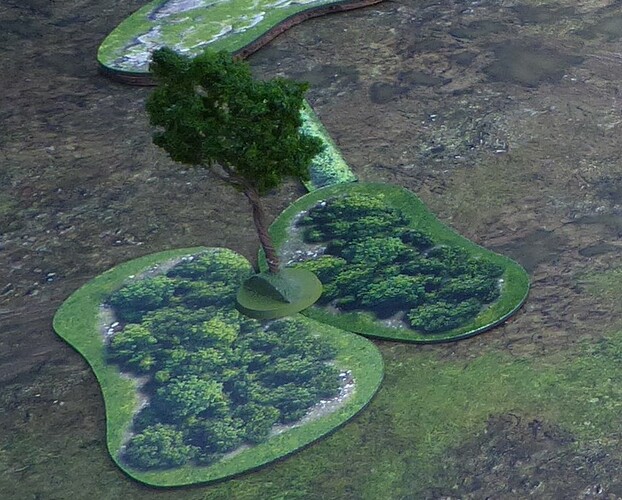 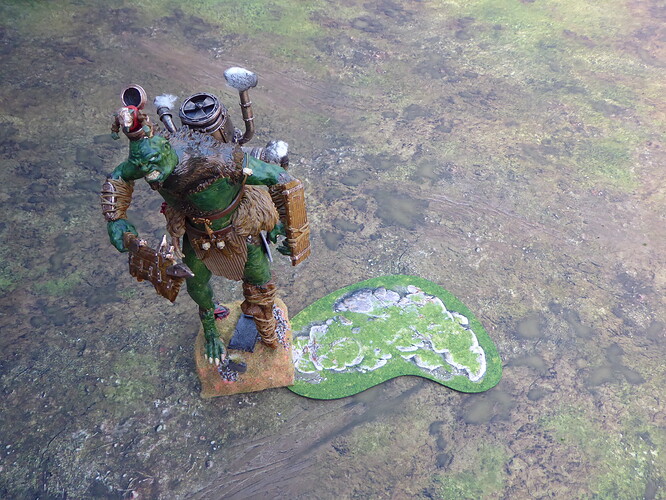 Building them up with a piece of foam board can give some elevation to distinguish them from flat difficult terrain without compromising significantly their advantages. 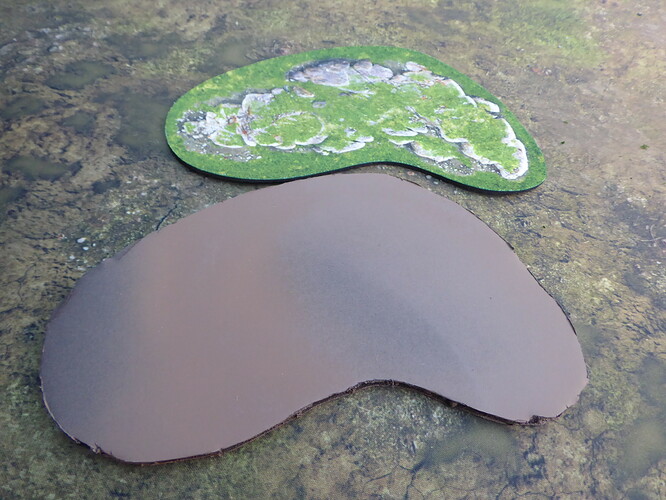 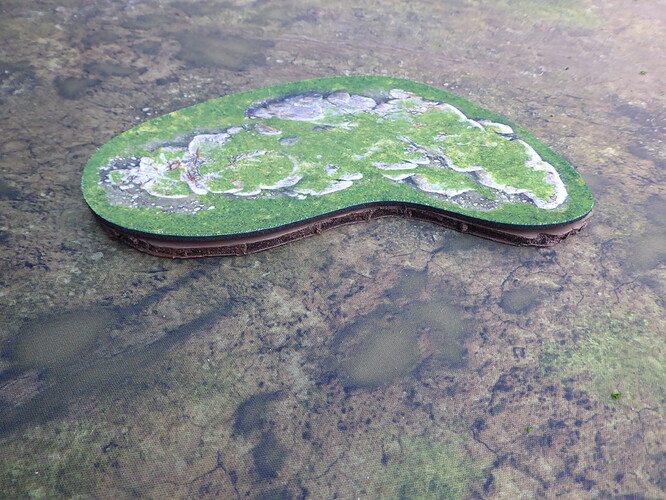 Blocking terrain can not be entered by units and therefore need not be represented by 2D pieces on the battlefield. 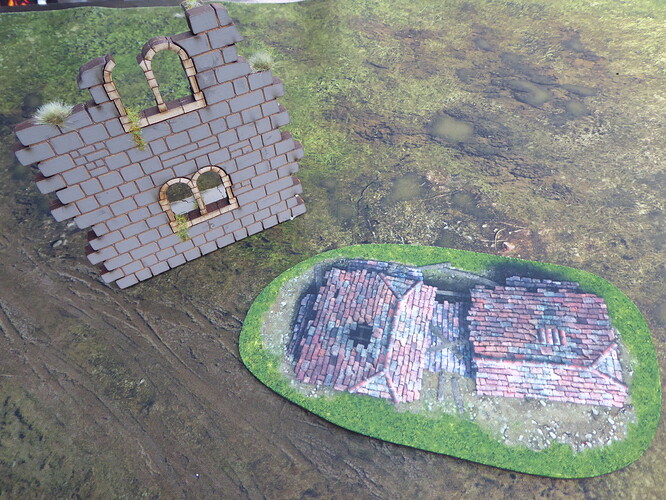 So what does a 2D battlefield look like? Here’s an example: 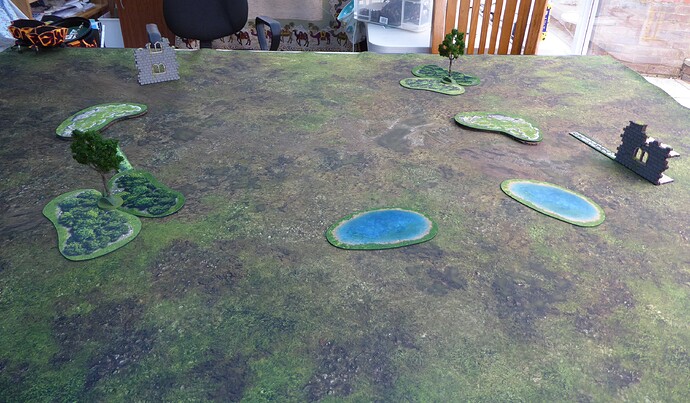 And as another benefit, the entire terrain set will fit into a box this size. 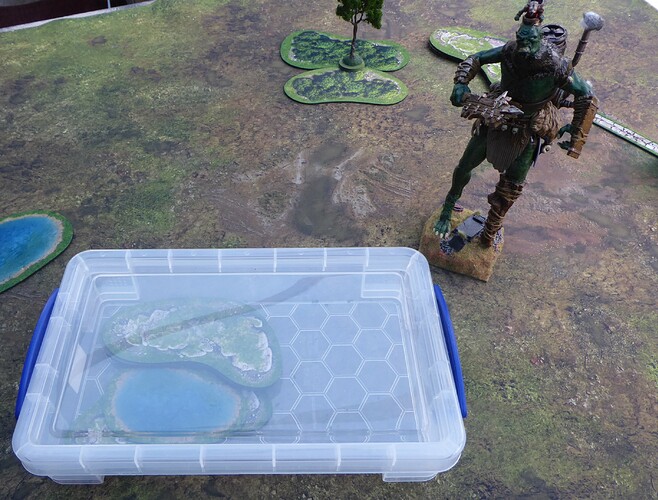 2D terrain is available from several sources and comes in a variety of colours. This is a typical set of 2D desert terrain. 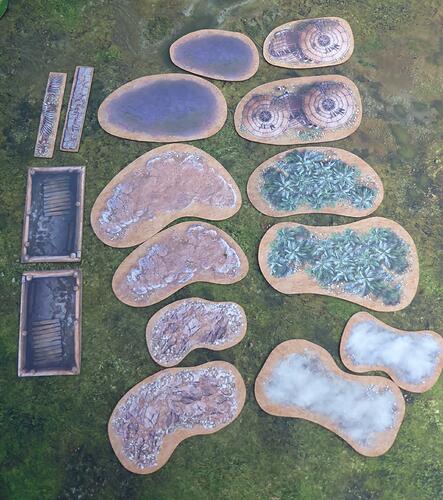 So, this is not a solution for everyone, but something to bear in mind when planning future terrain set ups.

Flat but removable (as above) would be my choice.

I hadn’t considered it before - but why only do this with woods? Could be done for awkward hills, fences etc too.

That can certainly be done, and I have done it. I have found however, that there is a tendency to not move the terrain when the first unit enters it and then have the difficulty of moving it while trying to retain the correct position of the unit already in place. The piece that has been moved then has to find a new home.
If the intention is to move the terrain when required, why not pre-empt this by having the 2D terrain already in place?

I can definitely see the utility in 2D terrain but for me it detracts from the spectacle.

Seemed to be more a thing in Warmachine for some reason.

I’d like to see you using 2d units as well next time please. Makes pivoting a lot easier and no pesky models to paint! Also spears never break, shields never fall off, no need for varnish to keep models nice.

I present the future of KoW, 2d units moving over 2d terrain! SPECTACULAR!

I suppose all terrain is on an appearance/realism to practical/playability spectrum and people will choose a different point between the two.

Having a flat fence template to swap with a 3D fence model if it suddenly becomes a busy part of the battlefield, seems like a decent compromise.

ETC 9th age tournament in Zagreb couple years back had 2d terrain. Idk, something about cutting expenses on transport and making of terrain. I am sure it was easier to move miniatures around, but It was so sad to look at it…

So what does a 2D battlefield look like? Here’s an example:

At this level, I’d just commit fully to 2D - make sure the pictures were great (possibly textured), matched the battlemat, not raised, not too shiny.

I’d like to see you using 2d units as well next time please. Makes pivoting a lot easier and no pesky models to paint! Also spears never break, shields never fall off, no need for varnish to keep models nice.

Guess you can use UB then and sell those miniatures.

It does not appeal to me at all to use 2d terrain! For me it’s a visial hobby and eye candy is what I want! Yes, it can be a little inconvenient, but I never experienced terrain being a real problem.

Not so much musing as a suggestion…

Hard no from me.
It’s a big part of why I never even tried Warmachine. My interest in whatever game it is just evaporates when a table looks like that.

To me a fundamental part of wargaming is that there is a physical miniature representation of a battle field.
2D terrain (and unpainted models) look like board game pieces, not a battlefield (or warriors).
I’m not too fussy about how well it’s done as long as it looks the part.

Very much agree, two painted armies clashing on painted terrain is one of the best things in life. I’m cool with the mechanics of the game being a little rougher than they have to be to accommodate.

That said, I’m kind of inspired to do removable fence on a fence base, like we do with removable trees on a forest base. Fences are a particularly shaggy bear to balance on / work with.

You made my point for me…

I have some terrain from Monster Fight Club, prepainted on double sided neoprene mats and they give me the best of both worlds. My obstacles are rock walls/fences mounted on 1" wide x 6" or 9" plasticard, so a measuring stick can accurately replace on in the heat of battle. My pond/field/ height flat difficult terrain is flat enough to not interfere with model placement.
That leaves impassable (not really a problem) and hills.
Hills.
Ugh.
My ancient Geo-Hex hills get the job done at home, and I have a Warchest Creations MDF stairs piece that serves me well away from home, but I’d really love to find an ideal solution to the Hills Conundrum, and in more designs than “we have both kinds, green AND brown!”

@TwoWolves Yes, it’s hills really isn’t it? With a bit of careful selection the other types can be worked around.

I compromise on appearance here, and build my hills with fairly wide stepped layers. Doesn’t avoid all the issues but makes them easier to work with. @KoshtraBelorn I’d probably keep these in the side of my army case, for when the scenery’s already been nabbed or only the extreme pieces are left.

When I built my custom terrain for home games, I opted for a mix of form and function.

My hills are roughly 1.25" tall, so they are easy to balance models on. The tops are flat and the slopes are steep to facilitate easy model placement. However, they are fully textured and even feature dwarfve ruins in some of the sides.

All difficult terrain has a base with removable “slices” or terrain from the top. I try and return trees and statues to their place once moved.

My obstacles are all magnetized to the bases so that when a unit is about to step onto it, you can remove the wall itself and use the base.

I’ll try and get some photos at some point to share, but they were really easy to do with minimal effort.

I’ve tried to find flat hills that are 1" high and I have 1" blocks in my case to try to get round the hill problem but it’s not ideal.

At the ETC the year before in Salamanca, they’d actually drawn the outlines in blue sharpie straight onto the unfinished particle board table surfaces at some of the tables!!!

It was very sad.

All of my traversable terrain pieces are either flat enough to use, or have a flat template their same exact shape.

If I ever buy one of those 2d sets (doubt it, I’ve got plenty already) I will make 3d versions to match the shape, to put on top.