As the title suggests, I am in the market for some Rev Cav models. The Mantic ones are tired sculpts and I would prefer to avoid the GW Black Knight/Hexwraith kits. Anyone know if any? STLs that I can print are totally on the table as well. 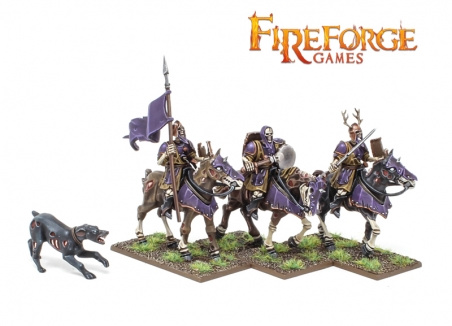 The Fireforge undead do look wonderful, they are just a bit pricey. Are the Mantic Revenant Cavalry that bad? I’ve just ordered 20 of them.

No, they are not. It’s just that they are amongst Mantic’s earlier sculpts. They can be described as “the cheaper alternative to GW, both in price and quality”.

It’s not that they are bad, they just have somewhat less detail on them as -for instance- GW black knights. Mantic as a company is improving every year, so it’s a given that the earlier sculpts (most of the undead line) doesn’t hold up to the more recent nightstalkers and northern alliance.

It’s not that they are bad, like the old Mantic men-at-arms or the goblin spitters. Most of the undead line holds itself quite nicely, even though they are quite old.

I love the rev cav. Just boil some water to throw the lances in, they usually come very bendy

mine are delightfully metal

I preordered them in the days before even the KoW fold out pamphlet was a thing, and some day soon I’ll put those regiments together… I’m slow, don’t rush me

hehe, its in the nature of Wargamers to have plenty of models laying around to be painted “that one time”. I also have a regiment of Mantic’s revenant cavalry somewhere which I really want to paint since I do want to field that horde of rev. cav one day. But first things first. These days that’s soul reaver infantry.