Newbies check out Kings of War for the first time

Well, this is sort of a battle report, so I figured this was the place for it. But also lots of rambling thoughts about the game from a new players’ perspective & some “hobby” bits thrown in too 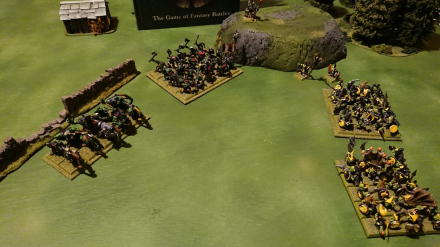 Newbies check out Kings of War

A lengthy ramble of thoughts and pseudo-battle report of two new players, woefully unprepared, trying out Kings of War for the first time!

Cool. Would you like feedback on the things you were not sure about, or did you figure it all out after the game?

Orcs and goblins can be allied together, so you could use them both in one force if you wanted

Love the insights. Also good to see things we take for granted/very clear aren’t always like that for new players.

As @FredOslow mentioned, would you like a reaction to your questions?

One thing is that easyarmy.com should be online for KoW3 any day now. This should give all the things you want for a listbuidling app.

As for characters, they are good and -indeed- the Goblin king get five shots per turn with the bow. He’s a hero, for all intents and purposes. That said, individual characters have one very big disadvantage - they don’t score.

Yup I’d love reactions to the parts we were unsure of, here or feel free to comment on the site of course if you like

@Vince as I replied on the comments on my blog too… I’m still a bit confused why the King gets a gatling gun instead of the shortbow as described, but okay then!

Yeah when I finish the painting & basing I want to get done, I will probably end up trying that out. But I still can’t do the kind of army I’m used to which was always a 50:50 split of the two really. Plus lots of the units would class as irregular in KoW so I can’t ally them in. It’s all pretty annoying tbh, but I’ll figure it out eventually

@Vince as I replied on the comments on my blog too… I’m still a bit confused why the King gets a gatling gun instead of the shortbow as described, but okay then!

Hehe; I can see where you come from! For us regulars it’s just one of the things that defy logic due to the simplicity of the rules. The “king” slot in the army lists represents a leader with some combat potential. In the KoW ruleset a model has the same amount of shooting attacks as regular attacks (which works really well in the game) but defies logic a bit. To solve this, your leader probably has a magical bow or gatling gun or whatever he could pilfer from his clan’s armory.

then replying to your blog post: (not gonna be complete here, it’s a wall of text and only a short lunch break)

Magic is -thankfully- not a complete mini-game or as game breaking as that other game. The nightmares of purple suns to my lizardmen army have only just gone away by now… It’s perfectly viable to field an army without magic users though I usually find room for one with the inspiring talisman over an army standard bearer.

That said, some tools (Healing, bane chant, legendary spells, surge) can very powerful if used rightly. The raw damage spells (fire, lightning) are not that useful except for taking on chaff.

You post about not being able to use your human minis without Uncharted Empires. Fortunately, there’s a human empire in the main rulebook -basilea. I was in the same boat as you a few months back and wrote this blog post about it: Summary: Basileans are perfectly viable even without angels, firebirds and plate-ogres. (Though I’m assembling a phoenix right now -but more due to the gorgeous nature of the model over actual battlefield power)

Last reaction today: I understand why you played a 300-point battle due to miniature limitations. I think that the absolute minimum battle size for Kings of War is probably 800-1,000 points on a side, while the preferred army size is roughly 2,000 points.

To uyse your collection, I would suggest teaming up your orcs and goblins to a single army (and ignore the ally rules), add whatever models you have and match this with your human basileans. In friendly battles, -especially against a new player- I wouldn’t object against such a combination as there’s not so much imbalance by combining the two .

Magic is -thankfully- not a complete mini-game or as game breaking as that other game. The nightmares of purple suns to my lizardmen army have only just gone away by now

Thankfully for me, I’ve only heard comments like this about this kind of thing, I never played WFB in those times!

That said, without houserule limitations the magic was broken in every version of WFB anyway I think though, so yes, it’s a really good thing KoW isn’t like that!

You post about not being able to use your human minis without Uncharted Empires.

Well I think the human models I have painted are only about 300-400 points worth in KoW anyway (it’s a Quickstarter force in my other game!), so I’d need to paint more to use them in a decent size for KoW anyway - and I will have the Uncharted Empires book way faster than I can paint them!

But that’s exactly what I was going to do!!

As much as I am joking, that genuinely does describe a bit like how my army used to work waaay back when (I mean, they were Orc war machines back then too, but I digress…). I’ll have a blog post all about that in a few weeks/months from now in fact - about army building and what I’ve been up to there

And don’t worry, I will get there for KoW armies; all in good time (for me

). In my past wargaming “lives” I’ve always rushed/ignored the “hobby” side in favour of the “gaming” side, and this time around I am determined not to do that, I am savouring the idea of only playing with completed models etc and taking my time with it all.

You wrote a very nice article, I am happy to read the thoughts of newer players. You said you welcomed feedback so I will write something now that I finally have time. It is on my mobile though, so it might come across a bit choppy.

Game played with the “Kill scenario”:
I am glad it worked out for you but KoW is very much a scenario based game and Kill is most often a poorer representation of the game than its scenario counterparts, in my opinion. I would always choose Loot or Pillage for an intro game, Kow is designed to be more simple than some other games so I think we benefit from showing off that aspect from the get-go. You do touch on this, when you say that the orcs would benefit from just sitting on the back line. If you were playing for tokens, go ahead and sit on the back line, and give me a free win

Your points limit was small, many have said that kow only gets better when you scale up, almost with no upper limit, as several layers of battle lines makes it even more interesting .

Heroes (even individuals) do indeed count as a “full drop” during deployment.

All units use their attack profile for melee and shooting, so indeed 5 attacks on the goblin king shooting .

As far as we could tell, units can only strike melee attacks at all, if you charge or counter-charge, not if you just “remain engaged”, and that is the reason why a Wavered unit can’t even strike back

due to the way the counter-charges worked, the melee gradually shuffled to one side as the Orcs re-aligned to hit the Goblin regiment, causing the King to also get “nudged” away it seemed, disengaging him and allowing the other Orcs to shoot him.

had the Orcs routed the Goblin King in similar fashion, they would have been able to ‘Overrun’ into the regiment.

Correct, on a 1+ overrun (so auto in other words)

A charge + Countercharge multi charge is treated just like a normal multicharge.
If a regiment and a horde goes in, they make up 100% of the chargers. So as the horde is twice as wide as the regiment, the horde are two thirds of the chargers frontage and the regiment are one third. So after hitting the enemy, that is the amount of enemy contact they should end up with. Two thirds and one third respecticely.

Yes, movement is everything in KoW. Most players love that restriction, and the enforcing of straight lines (no sloppy moves). It means you must be good at planning, as you can’t easily correct your placement. The addition of the chess clock means that not only must you be good at placement, but you alsoo must be quick and decisive. You cannot spend too much time deliberating and fine measuring, as you will run out of time. The clock makes it feel like you are the general during a real battle, IMO.

Yes the corkscrew can be annoying. The trick to avoid it is to make sure your units move in a perfect battle line. Corkscrews can only happen when one unit runs too quick ahead of its nearby allies (sticks its nose out).

Sometimes it can feel a bit quick for units to be taken off with one punch. But this rarely happens (except with chaff or low Defense units). Use chaff as screens to avoid being double or triple charged and most units should survive at least one round. Dying before getting to strike is for me much more of a reminder of warhammer than something I would attribute to KoW.

As for the point of it being strange that units are not reduced in fighting power as they suffer damage: it is a deliberate simulation/simplification of a warhammer unit taking casualties. Imagine a regiment of 5x4 halberdiers in warhammer. They each have one attack and two ranks get to fight. So 10 attacks. If you killed the two back ranks, still the same number of attacks would strike (10). Right? So KoW just estimated those numbers and made them the base number of attacks, so we dont have to worry about removing guys and counting for ourselves.

Phew that took time on the mobile!

Keep playing and having fun!

Thank you so much Fred! That’s great to hear all those answers and that we were, for the most part, playing things correctly then. I was kinda worried I might have been getting wrong impression of a few things, so that is super useful to know.

(Although you’re mad for doing that on a mobile, I really appreciate it!